UK Trade and Investment in November published a guide introducing UK offshore wind to investors and suppliers entering the sector and exporting from the UK.

The IEA Wind 2013 Annual Report, released in early November, says global wind energy capacity generates enough electricity to meet about 4 percent percent of the world's electricity demand. In 2013, five countries installed more than 1 gigawatt (GW): China (16.09 GW), Germany (3.36 GW), the UK (2.42 GW), Canada (1.60 GW), and the US (1.09 GW). Wind energy accounted for nearly 4.1 percent of US electricity generation, was deployed in 40 states and territories, and represented 9.95 percent of new US electricity generation capacity at the end of 2013. Nine countries increased capacity by more than 20 percent, with Finland boosting its capacity by 67 percent.

One of the UK’s leading news organizations, The Guardian, paid a visit to one of the world’s leading coal production areas in Wyoming.

Tennessee Valley Authority has announced its economic development efforts were successful in attracting and retaining more than 60,300 jobs and spurring a record $8.5 billion in business investments in the 7-state, 9-million-resident TVA region in fiscal year 2014, up from 52,000 new and retained jobs and $5 billion in capital investment the year before. More than 190 companies were recruited to the region or expanded existing operations, contributing to the following job totals and business investments in 2014:

The US Dept. of Energy on Nov. 6 recognized Cummins Inc. for demonstrating leadership in reducing energy use and costs at its Jamestown Engine Plant in Jamestown, N.Y. Through the Better Plants Challenge, Cummins committed to a 25-percent reduction in energy intensity by 2016 across 104 facilities, including 19 plants covering more than 8 million sq. ft. (743,200 sq. m.). Cummins has already achieved its goal with a cumulative energy intensity reduction of 34 percent. The company’s efforts in Jamestown are expected to save the company nearly $1.4 million in energy bills. The Jamestown Engine Plant has been undergoing its largest infrastructure upgrade in more than 40 years, setting aside $5.1 million specifically for energy efficiency projects.

On Nov. 24, US Secretary of the Interior Sally Jewell, Massachusetts Gov. Deval Patrick and other officials announced that more than 742,000 acres offshore Massachusetts (pictured below) will be offered for commercial wind energy development in a January 29, 2015, competitive lease sale.

In the Oxford American, Anna Gisleson profiles the gentleman leading the charge to make the oil & gas sector pay for what has happened to the Louisiana coast.

NRG’s sustainability goals include its vast solar power portfolio and its EV charging network. They also include the company’s new headquarters in Princeton, N.J. The 130,000-sq.-ft. (12,077-sq.-m.) complex will feature two solar fields with 765 kW of capacity; 30 EV charging stations, and off-grid and CHP systems. “Strong support from New Jersey local and state officials, and particularly the New Jersey Economic Development Authority, reinforced NRG’s decision to stay and grow in New Jersey,” said the company, which will lease the new HQ on a 15-year term with Boston Properties, after having outgrown its current space in Princeton. The company employs more than 900 people in New Jersey, and expects more than 500 of them to work at the new site. 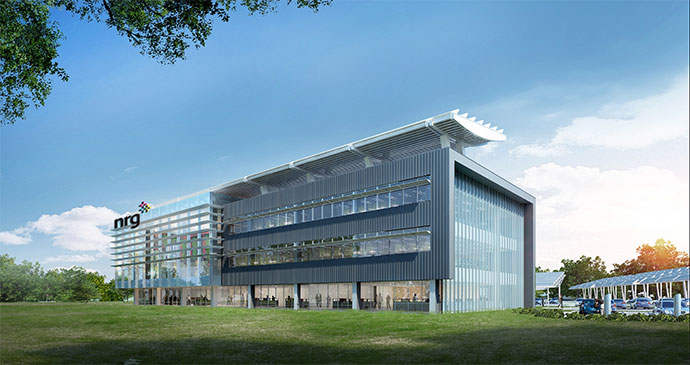 NRG’s new headquarters in Princeton, N.J., projected to be complete in 2016, will be leased from Boston Properties.
Rendering courtesy of NRG and Business Wire

GE on Nov. 13 announced the opening of the $500-million, 250,000-sq.-ft. (23,225-sq. –m.) Brazil Technology Center, located on the Ilha do Bom Jesus peninsula in Rio de Janeiro, that will focus on developing advanced subsea oil and gas technology. The center, GE’s first in Latin America, is expected to employ 400 researchers. “Our new research center in Brazil will allow GE to innovate locally for our customers in Latin America and then export those innovations to the world, “ said GE Chairman and CEO Jeff Immelt. “Over the past decade, we have doubled down on our R&D investment and expanded our global network of Research Centers to address customers’ growing needs for breakthrough technology that we develop with them.”

The GE Brazil Technology Center is one of nine research centers globally and one of five outside the US. The center, half of which is devoted to lab space, will also include a Global Learning facility the company characterized as the Rio branch of “Crotonville,” GE’s global leadership development institute in the US. 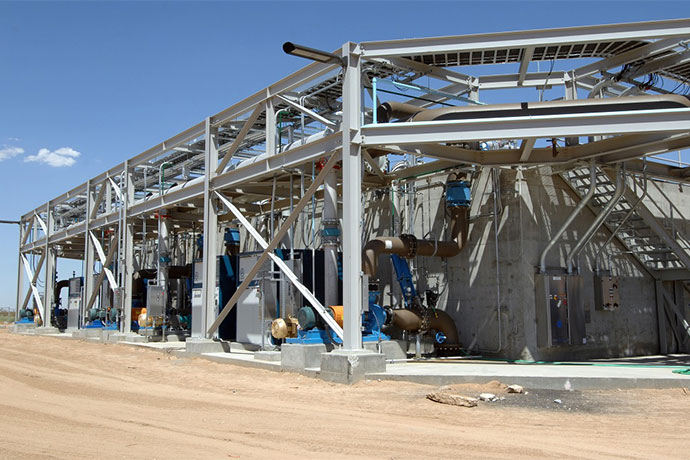