The senior vice president of global policy and law for the U.S. Green Building Council apparently couldn’t take it anymore. Roger Platt’s in-your-face comments to the new leader of a minor-league rival to LEED were posted in January.

Today, Feb. 7, at 1:30 p.m. Eastern time the Woodrow Wilson Center hosts a discussion titled "U.S. Energy Independence: A New American Narrative," featuring global energy expert Daniel Yergin, among others. The event will be webcast live, and is part of the center's series The National Conversation: Discourse the Nation Deserves.

CN announced in December it had started serving the rail needs of yet another frac sand producer on its Wisconsin rail network. The production facility of Source Energy Services (SES), formerly Canadian Sand and Proppants, in Weyerhaeuser, Wis., is located on CN’s rehabilitated Barron Subdivision and will have an annual production capacity of 1.2 million tons of high-grade sands, rising to 2 million tons by the third quarter of 2014. In 2012, CN spent US$35 million to restore a 40-mile segment of the subdivision between Ladysmith and Poskin, Wis., to better serve the frac sand market. CN has 11 frac sand facilities on its network in Wisconsin, which is seeing a substantial increase in frac sand production because of its reserves of high-quality and in-demand sands.

"In conjunction with the opening of the production facility in Wisconsin, SES will also bring on-line the largest frac sand terminal in the Western Canadian Sedimentary Basin in Wembley, Alberta, on CN’s network near Grande Prairie," said Brad Thomson, president and CEO of Calgary-based SES. "With a loop track and on-site storage capacity of 40,000 metric tonnes of sand, this will be SES’s ninth and largest terminal on a network that spans North America, from Ft. Nelson, B.C., to Three Rivers, Texas."

“In addition to our investment on the Barron Sub in 2012, CN accelerated work this year on the US$33 million-rehabilitation of 74 miles of track between Wisconsin Rapids and Blair, Wisconsin," said Claude Mongeu, CN president and CEO. "This will increase car-loading capacity and train velocity for the growing frac sand supply chains. Over the past five years, CN’s frac sand market has grown by nearly 300 per cent, rising to more than 50,000 carloads in 2013. Our end-to-end service focus has supported that growth, and we expect to achieve C$300 million in frac sand revenue by 2015.”

Hawaii Gov. Neil Abercrombie in late January announced the release of more than $28.3 million in capital improvement project funds administered by the state Department of Business, Economic Development and Tourism (DBEDT). More than $13 million will go toward improvements to Natural Energy Laboratory of Hawaii (NELHA) facilities (pictured below) on Hawaii Island, home of the Hawaii Ocean Science & Technology Park.

“A successful test-bed for applied research, demonstration, testing and evaluation, NELHA is a driver of innovation, economic development, and job creation on the Big Island and for our entire state,” said Abercrombie. “Investments in these and other facilities and programs will further opportunities to advance our energy sustainability, diversify our economy, and keep us on course toward long-term economic viability.”

In addition to more than $9.6 million for new roads, NELHA will get more than $2.3 million for a seawater system upgrade and $1 million (in addition to $3 million in federal funds) for renovation of the NELHA Alternative Energy and Biotechnology Incubator. The funds released by Abercrombie also included more than $5 million in renovations and repair's at Foreign-Trade Zone No. 9 on Oahu, including the creation of more office space at its Import-Export Step-Up Incubator. 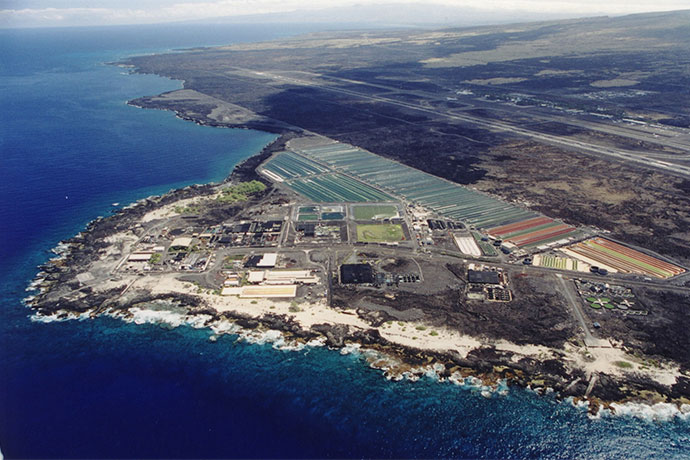 Photo courtesy of State of Hawaii

NPR in January ran a series of reports profiling “The Great Plains Oil Rush.” For more, see our own coverage here, here and there.

Westinghouse enthusiastically welcomed the decision late last month by the Polish government to adopt its new program for nuclear power, which will pave the way for the construction of the country’s first nuclear power plant, based on the company's AP1000 reactor. The program corresponds with the aims of the European Commission’s proposed energy and climate objectives to be met by 2030.

The first of four AP1000 units is nearing construction completion in China, and four additional AP1000 reactors are in the earlier stages of construction in the U.S. Contracts for another eight AP1000 units are expected to be placed in China shortly. Westinghouse currently is in discussions with several other European customers in the selection of the Westinghouse AP1000 plant, including customers in the UK and Bulgaria.

“The Government of Poland and Polska Grupa Energetyczna SA (PGE) should be commended for their thorough consideration and preparation in taking this historic decision to begin the country’s nuclear program," said Jeffrey Benjamin, Westinghouse senior vice president, Nuclear Power Plants.

In December, NaturEner, which owns and operates three wind farms in Montana, sued San Diego Gas & Electric, a subsidiary of energy conglomerate Sempra Energy, for breaching contracts to invest in the Rim Rock wind farm. The lawsuit also seeks to prevent the utility from reneging on its contractual promise to buy the renewable energy generated at the facility.

According to NaturEner, SDG&E had agreed to invest approximately $285 million in the 189-megawatt Rim Rock wind farm and to purchase renewable energy credits as part of its obligation under California law to use renewable power. SDG&E has been purchasing renewable energy credits from Rim Rock since the project began operating 16 months ago. But in December the utility informed NaturEner that it would not honor the deal, "wrongfully claiming that the company had not satisfied some of the provisions of the contracts, mostly related to the protection of eagles and other birds."

NaturEner's lawsuit, filed in Montana District Court in Toole County, argues that the utility's actions are motivated by buyer's remorse, because of the falling price of renewable power. The complaint states NaturEner's belieft "that SDG&E is using the Avian Conditions as pretext for escaping its contractual obligations."

In late January, a Montana judged issued a temporary restraining order blocking the utility from canceling the contract, pending a hearing on Feb. 14.

FMI, the engineering and construction advisory firm, this week released its Q4-2013 Construction Outlook. The forecast predicts 2013 to end with 7 percent growth for the construction industry as a whole. Among the highlights: "After a booming return in 2012, power construction slowed to just 2-percent growth in 2013. However, the industry is expected to grow an additional 5 percent in 2014 to reach $101.4 billion."

Apparently a new corporate campus isn't quite enough to contain ExxonMobil's growth. The Howard Hughes Corp. and its wholly-owned subsidiary, The Woodlands Development Co. announced in December that Exxon Mobil Corp. had signed leases for approximately 478,000 sq. ft. consisting of an entire office building and a portion of a second office building at Hughes Landing (pictured), a 66-acre mixed-use development situated on 200-acre Lake Woodlands. The Woodlands team is developing the two Class A office buildings, each approximately 300,000 square feet, along with an adjacent 13-story, 800,000-square-foot parking garage.

“We are very pleased to welcome ExxonMobil as a tenant in Hughes Landing, only a short distance from their new campus,” said Paul Layne, Executive Vice President of Master Planned Communities for The Howard Hughes Corp. Hughes Landing on Lake Woodlands is planned to include up to 11 Class A office buildings, shopping, dining and entertainment, a Whole Foods Market®, an upscale hotel, state-of-the-art fitness center and up to 800 multi-family residences. The first office building, One Hughes Landing, was completed and almost fully leased in only 10 months. Given the strong demand, construction and leasing is already underway for Two Hughes Landing, with a spring opening planned. 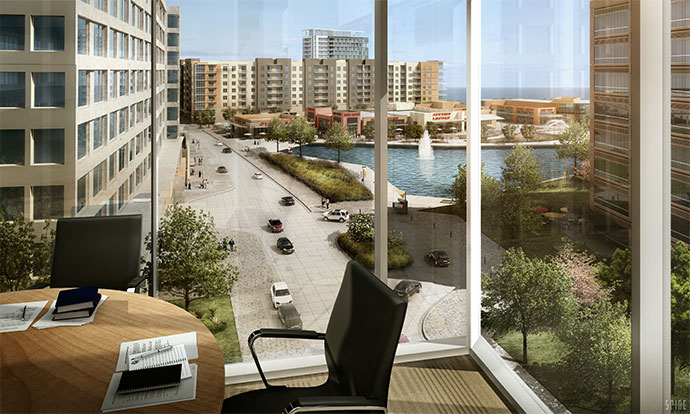 Rendering courtesy of The Howard Hughes Corp.
A December report from the Government Accountability Office on coal tract management by the federal Bureau of Land Management found that the BLM could enhance the appraisal process, more explicitly consider coal exports and provide more public information. Since January 1990, the BLM has leased 107 coal tracts. Revenues from federal coal leases have generated about $1 billion annually in recent years. In fiscal year 2012, about 42 percent of the 1.05 billion tons of coal produced in the United States came from coal tracts leased under the federal coal leasing program.