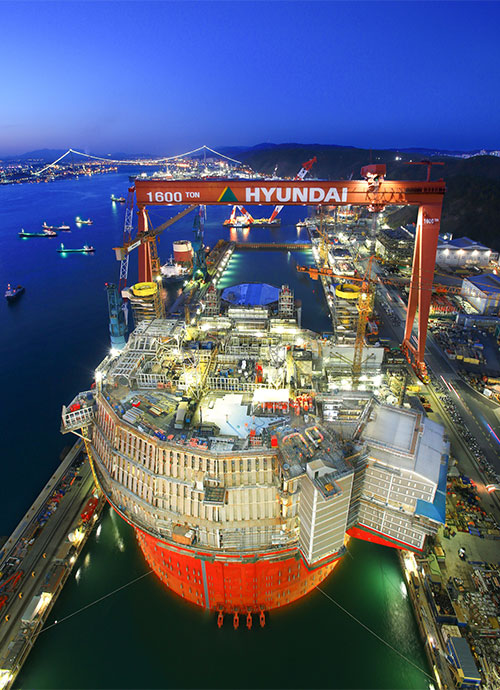 In December, the company announced that it had earned its 37th "World Class Product" certificate from Korea’s Ministry of Trade, Industry and Energy for its cylindrical floating production storage and offloading (FPSO) vessel, the Goliat FPSO ordered by Eni Norge in 2010.

"World Class Products" is a policy recognizing products that have over 5-percent global market share, rank within the Top 5 in their market, and have an international market worth over US$50 million with exports of US$5 million annually.

This Goliat is designed to store 1 million barrels of crude oil, and 4 million standard cubic meters of gas per day. It measures 112 m. in diameter, 75 m. tall and weighs about 53,000 metric tons. Goliat FPSO will be installed in the Goliat field, 85 km. (53 miles) northwest of Hammerfest, in the Barents Sea.

"Hyundai Heavy's involvement in offshore structures began with a Saudi Arabian order for 89 jackets and deck structures for the Open Sea Tanker Terminal for the Jubail Industrial Harbor Projects," says the division's Web page. Since 1991, the division has successfully completed more than 150 projects for the oil and gas industry worldwide, including 3 million metric tons of offshore facilities and 5,100 km. (3,170 miles) of subsea pipelines in 49 projects for more than 30 clients.

Hyundai Heavy's "On-ground Build" method has been used in the construction of drilling rigs and other huge offshore facilities. In 2002, when it lifted the 12,000-metric-ton topside for the Nakika FPU Project ordered by Shell, Hyundai Heavy's innovative lifting technique, Super-Lift, was registered in the Guinness Book of World Records. 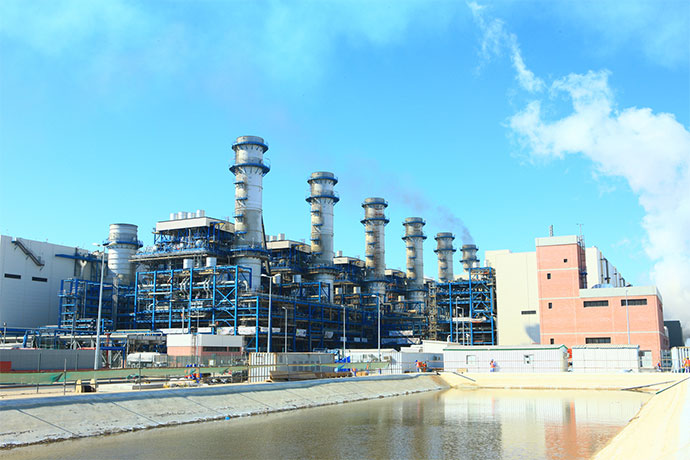 Early completion of the 2,000-MW Sabiya Combined Cycle Power Plant in Kuwait in 2011 may have helped Hyundai Heavy earn a major new contract it won in December.

The company's expertise lends itself to power plants too.

HHI and Sidem, a subsidiary of Veolia Water Solutions & Technologies, in December announced the signing of a US$1.4-billion engineering, procurement and construction (EPC) contract with SHAMAL AZ-ZOUR AL-OULA to build the first phase of the Az-Zour North Independent Water and Power Project (IWPP) in Kuwait.

HHI, as the EPC consortium lead, will carry out the construction of the gas-fired 1,500-MW combined cycle power plant. Sidem, as EPC consortium partner, will construct a 107 MIGD (486,000 m3/day) desalination water plant on a turnkey basis. The capacity of Az-Zour North will account for around 10 percent of Kuwait’s installed power generation capacity and around 20 percent of its installed desalination capacity.

The consortium will complete the project approximately 100 km. (62 miles) south of Kuwait City in the fourth quarter of 2016. Kuwait’s Ministry of Electricity and Water (MEW) will be the off-taker of power and water produced from the project under a 40-year Energy Conversion and Water Purchase Agreement (ECWPA). "The project is the first independent water and power project in Kuwait developed as part of long-term expansion plans of the power and water production capacity in Kuwait," said HHI, "and a pathfinder scheme for Kuwait’s public-private partnership (PPP) program."

As EPC partners, HHI and Sidem have been participating in the development process together with the consortium formed by GDF SUEZ, Sumitomo Corporation and Abudlah Hamad Al Sagar & Brothers, since March 2011. "A positive evaluation of HHI by the Kuwaiti Ministry might have benefited the award as HHI handed over Kuwait’s previous Sabiya Combined Cycle Power Plant far earlier than the required schedule, which enabled MEW to meet the challenging electricity demand during the summer peak load period of 2011," said the HHI release.

Yet another HHI project goes in a different direction altogether ... any direction, actually.

Polaris Shipping Co., Ltd., Korea Midland Power Co., Ltd., Hyundai Heavy Industries Co., Ltd., and Siemens Energy Solutions Ltd. signed a Memorandum of Understanding at COEX Intercontinental Hotel in Seoul on December 10, 2013, to develop MOBILE POWERSHIP, an integration of shipbuilding and power generating technology in which a highly efficient power generating facility will be installed onto a Floating Storage Regasification Unit (FSRU) for the very first time in the world.

"It is expected that MOBILE POWERSHIP will commence its operation in December 2017 with total investment of US$940 million," said HHI. "When compared to building a power plant on land, the model will substantially reduce civil complaints as it will not require a large scale land. In addition, due to systemized and skillful shipbuilding process, overall construction period will be shortened. In terms of power transmission, MOBILE POWERSHIP will utilize existing cables so that sections subject to new installation will be minimized, which leads to significant cost saving. Once the business model is successfully launched in Korea, it is anticipated to move overseas to selectively target combined cycle power producing market where high yields can be generated."

“MOBILE POWERSHIP is the world’s first invention to integrate a combined cycle power generating facility and liquefied gas storage in which a gas turbine and a regasification unit are directly linked to achieve curtailment of fuel cost," said a spokesperson from Korea Midland Power Co., Ltd.

“MOBILE POWERSHIP is a mobile power plant with a capacity to promptly manage natural disasters such as earthquake and flood," sais a spokesperson from Polaris Shipping, the world's leading very large ore carrier owner in the shipping industry.

According to the release, once performance of the Powership is "ascertained through pilot project in Korea, then it will be exported to Philippines, Indonesia, Brazil, and other countries where power shortage has become a critical issue. In addition, it is anticipated that the project will firmly position itself as a business model well suited for South Korean policies under the 'Creative Economy' by generating approximately $2 billion per project." 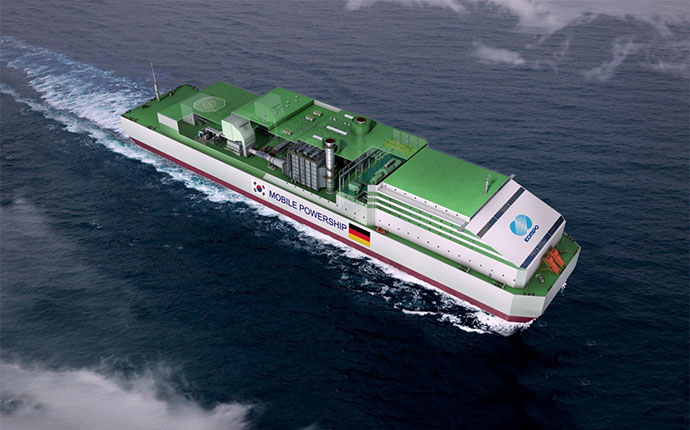 The new MOBILE POWERSHIP project from HHI, Siemens and others could create entirely new and very lucrative opportunities in areas of the world where power shortages have become critical.