No Nukes, No Problem?

Germans face a conundrum of their own creation. And most are fine with that. 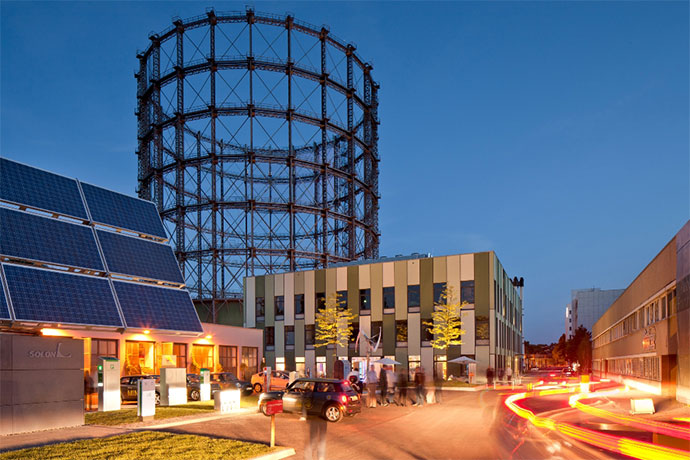 InnoZ in Berlin is charged with studying transportation and mobility issues as they relate to energy use. Frank Brehm, leader of infrastructure at InnoZ, says Germany’s energy transition “will be the most important issue of the new government. It’s a big, big challenge .. we need an integrated and coordinated approach.”
by ADAM BRUNS
T 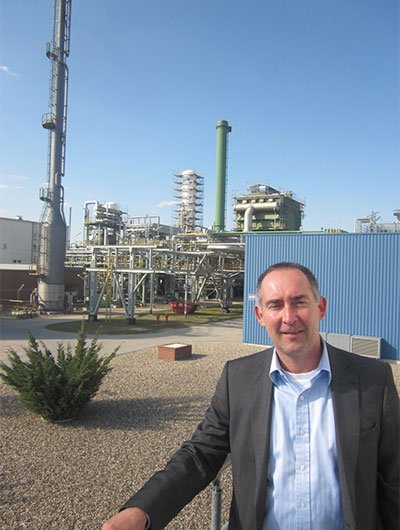 Andreas Dietrich, head of tonnage account management for the north, east and south of Germany for Linde Group's gas division, stands near a small part of the company’s massive complex in Leuna, Saxony-Anhalt.

wo years ago, after the Fukushima nuclear disaster in Japan and a successful ramp-up of renewable energy subsidies, the German government decided to permanently shut down eight of its 17 nuclear power plants and pledged to gradually close the remaining nine by 2022. And the country aims to supply 80 percent of its power needs with renewables by 2050.

But there are some problems to surmount first, starting with the high cost of energy for both businesses and residents. According to a US State Dept. update in 2013, Dena Energy Agency, owned by the state, expects energy prices for German households to rise 20 percent by 2020.

“In the past two years alone, German electricity prices for private households, already among the highest in Europe, have increased by another 8 percent to about 26 cents per kilowatt-hour,” says the State Dept. US household costs averaged 11.8 cents in 2011, according to the Energy Information Administration, while industrial costs were 6.9 cents.

A fall excursion to the former East German state of Saxony-Anhalt and to Berlin revealed some of the chinks in the German energy policy, even as it revealed its promise, starting with Linde Group’s industrial complex in Leuna, Saxony-Anhalt, where Andreas Dietrich, head of tonnage account management for the north, east and south of Germany, says the price of energy is two and a half times what it was two years ago.

“And the forecast says it will continue to go up,” he says. “There is a prioritization for energy from solar or biomass — companies have to take it, whether they need it or not. This means our gas and coke plants are running extremely inefficiently.”

In 2001 the company’s cost was €2.45 per megawatt-hour, he says. By 2012, it was €35.92 euros, and in 2013 it had risen to €52.77. “It will be at least €55 or €56 per megawatt-hour by 2014. This is a big problem for industry,” says Dietrich, whose employer registered 2012 revenues of €15.3 billion. He notes that companies are looking at Eastern Europe for potential future expansion, as well in overseas locations such as the United States. Overall, Linde Group has more than 1,220 plants at 337 production sites in 62 countries, and uses 20 terawatt-hours of energy per year. The company noted in a Jan. 2013 publication that it’s pursuing alternative energy sources such as geothermal, but there’s only so much heavy industry can do.

Dietrich says the basis for energiewende were mainstream political and society convictions that “nuclear is bad, CO2 emissions are bad, renewable energy is good.” Alternative points of view on the policy, he says, were “killed by feelings, not by arguments,” and the timing of the Fukushima disaster was the last straw.

Total cost of the energy transition policy will be between €600 billion and €1 trillion, according to German Environment Minister Peter Altmaier, says Dietrich. Renewable energy subsidies are currently whirring the meter at approximately €20 billion per year, with another €20 billion to €30 billion likely needed for network upgrades.

All is not negative for Linde, however. Pressed about the company’s condition, Dietrich says, “Yes, we're making money here, but the market is not growing. There are existing customers, but not new customers. We're still earning money, no question. But it’s an old market, not growing, and competition is quite high. It’s good for the customers, yes, but not good for us.”

Nevertheless, the transition policy is helping drive some business rather than quell it.

In December, the company announced that construction would proceed at Energiepark Mainz in that city’s Hechtsheim district, in partnership with Siemens, RheinMain University of Applied Sciences and Stadtwerke Mainz, and with support from the German Ministry of Economics and Technology.

“After its commissioning in 2015, the Energiepark Mainz is set to make a significant contribution to the success of Germany's 'Energiewende,” or energy turnaround,” said the company release. “In this pilot project, a specially developed electrolysis plant will produce major quantities of hydrogen, using energy sources including 'green' electricity from wind power. The hydrogen can be stored, loaded into tank trailers or fed directly into the natural gas grid, for heat or electricity. This allows the storage of electricity from renewable energy sources.

“The background to the Mainz-based project is the steadily growing use of renewable sources for power generation in Germany,” Linde continued. “Photovoltaic and wind power plants often deliver electricity at times when it cannot be directly consumed. ‘Further storage possibilities are absolutely essential if the energy turnaround is to make further progress,’ is how the directors of the Stadtwerke, Dr. Werner Sticksel and Detlev Höhne, explain the rationale behind the ambitious project. ‘The Energiepark Mainz provides an innovative solution to this key question affecting German energy policy.’ ” 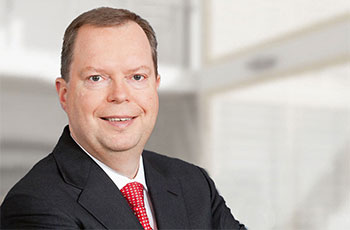 Peter Terium, CEO of RWE, says “the energiewende will only be successful if underlying policies are firmly based on a competitive and European mindset.”
Photo courtesy of RWE

Linde also is pursuing the development of 50 hydrogen stations for vehicles using fuel cells, starting in Berlin, and a hydrogen power storage project in caverns in East Germany. But there’s a lot of ground to make up as the nuclear plants are swept away.

“There are more question marks at the moment than solutions,” says Dietrich. “There are a lot of nice ideas around, interesting things, but at the end of the day, somebody has to pay the bill.”

Currently that somebody is German consumers and companies. Subsidies are dropping gradually, but not fast enough for those paying the price.

“The Green Party wanted to push the whole system. But nobody was thinking there would be such a boom,” observes Dietrich. “Companies and people were going through these regulations and said, ‘Wow, a guarantee for 15 or 18 years.’ A lot of people were investing.

“On one side, the energiewende is great, but now it’s running in the completely wrong direction,” he continues. “It's too successful. A government needs trust, and can't keep changing regulations.”

If it does, the risk is companies changing their minds.

“Everyone is waiting, especially the international companies,” says Dietrich, though decision delays in Europe especially are influenced at least as much by the euro crisis as by any country’s energy policy. But for heavy industry, energy is front and center.

“Here, they have a chance to go somewhere else. In Italy, companies left to Turkey because of the energy crisis. We see several international companies thinking hard about what to do in the future. Dow has a cracker here. But in seven to eight years it will have to be rebuilt. What will the Dow chief decide in seven or eight years?”

In the Energy Architecture Performance Index 2014 report released by the World Economic Forum in December, Peter Terium, CEO of major German utility RWE, writes, “The aim of creating a more sustainable, resource-efficient energy sector deserves full support. Nevertheless, the energiewende will only be successful if underlying policies are firmly based on a competitive and European mindset … Excessive cost, deindustrialization and lower levels of system adequacy will not be accepted by the broader public, despite an otherwise strong preference for sustainability and renewables.”

Terium commends efforts by German government, utility and industry associations to align the policy with the overall European Energy Market with proposals on market integration of renewables and security of supply. But he says a crisis is at hand.

“These proposals are based on the fact that European power generation is in a massive structural crisis,” he writes. “Subsidized renewable energy from Germany is ruining the business case for many thermal power plants. Renewable generators, however, are not able to replace coal- and gas-fired power plants since their output depends on fluctuating weather conditions.

“Germany has every reason to put energy policies high on its agenda,” he writes. “The new legislative period offers much opportunity to kick-start with a new policy approach — towards more competition and a more European approach.”

Despite the many challenges, it seems the sentiment is still strong for making the transition happen.

“The public will is still there,” says Linde Group’s Dietrich. “They're only complaining about the cost.”