It’s not every day you encounter a dance performance celebrating renewable energy at a former industrial site next to a coal-burning power plant. But that’s what will happen next month in Muskegon, Mich.

Energy issues will play a huge part in the November elections in the US, says Joel Kotkin’s latest column at NewGeography.com, but the only people such a focus will benefit are campaign consultants.

But there’s an election even earlier that means much more in the UK: As the September referendum on Scotland’s independence approaches, a new report from the British Geological Survey says while offshore gets all the attention, onshore shale oil reserves in Scotland could total up to 6 billion barrels. (Look for a full report on energy’s role in the debate leading up to the referendum in the August edition of The Site Selection Energy Report.)

In late June the City of Windsor, Ont., and Your Quick Gateway (YQG) reached an agreement with Samsung Renewable Energy on a 400-acre (160-hectare) solar farm to be located on Windsor International Airport lands. If approved, the Class 3 Solar Facility would have a total maximum nameplate capacity of 50 MW. The land lease will be for a period of up to 24 years with an additional total financial benefit to the City of Windsor of C$25 million. It’s just the latest Samsung renewable energy project to debut in Ontario, which inked a major agreement with the company a few years ago.

Wind's making the Ontario news too, as a new documentary from Sun News Network called "Down Wind" drew a scolding reply from the Canadian Wind Energy Association (CanWEA): "Documentaries have a well-earned reputation as sources of positive social influence; yet Down Wind chooses instead to try to sway viewers by ignoring overwhelming scientific evidence and global experience," said the statement. Among other things, said CanWEA, "Renewables like wind energy are not key drivers of rising electricity bills: firm Power Advisory LLC confirms that wind energy accounted for only 5 percent of the increase in electricity bills between 2009 and 2012, with the bulk of rising rates due to upgrades of older power plants and transmission systems." The association offered other rejoinders to the documentary's assertions in this three-page backgrounder document. 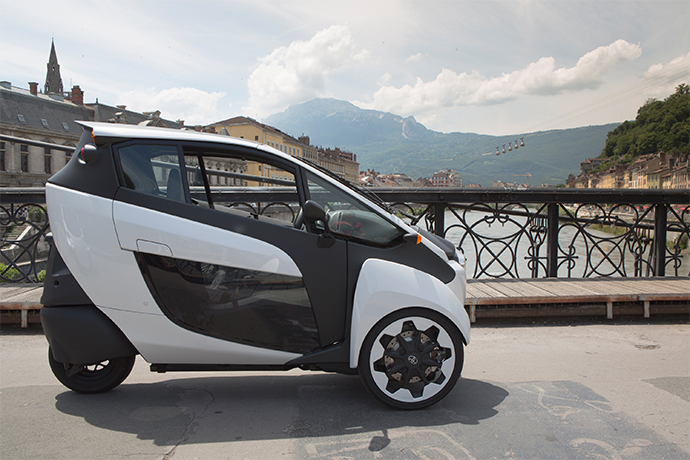 The French Alps city of Grenoble will be electrified this fall by a new car-sharing plan involving EVs. The plan below shows how the program works.
Images courtesy of Toyota

Urban transport of the future will become a reality in October in the French city of Grenoble thanks to a partnership between the City of Grenoble, Grenoble-Alpes Métropole, EDF Group, Toyota and Citélib, as 70 Toyota "i-ROAD" and "COMS" ultra-compact electric vehicles will be available in a car-sharing program. Vehicles can be charged at around 30 charging stations managed by Sodetrel (EDF Group) and located close to public transport stops. Called " Citélib by Ha:Mo," the service is ready for pre-registration by Grenoble commuters on www.citelib.com and will be operational for a three-year test period. 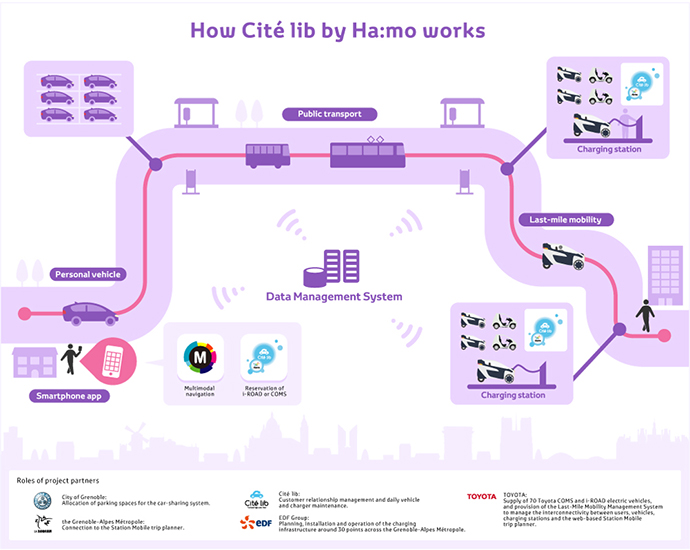 Research by Rhodium Group for the Risky Business Project — a new effort headed by co-chairs Michael R. Bloomberg, Henry Paulson, and Tom Steyer — concludes that climate-driven changes in heating and cooling will likely increase annual residential and commercial energy costs nationally by $474 million to $12 billion over the next 5 to 25 years and $8.5 billion to $30 billion by the middle of the century.

If you missed it first time around, check out the recent Site Selection Online Insider on business reaction to the EPA’s new Clean Power Plan.

More work may be headed to Vacationland, as Downeast LNG in June announced it will look to expand its 2005 proposal for an LNG import facility in Robbinston, on Passamaquoddy Bay, to include liquefaction and export capabilities. As it seeks to begin construction in 2016, it must still submit applications to FERC and the US Dept. of Energy. According to a study commissioned by Downeast LNG, over the three-year construction period, the LNG terminal would generate on average 2,350 full- and part-time jobs and labor income of $375 million. An estimated 1,100 construction jobs would be required during construction. After the terminal is completed, the permanent statewide impact of annual operations, including multiplier effects, would be an estimated $68 million in output, 337 full- and part-time jobs, and $21.6 million in labor income.

In the meantime, a bill approved by the US House of Representatives would speed up LNG exports.

Little Rock, Ark., has been chosen as the host city for the 2015 American Council for an Energy-Efficient Economy’s (ACEEE) National Conference on Energy Efficiency as a Resource. The conference, which will be held September 20-22, 2015, at the Statehouse Convention Center, is considered to be the country’s premier conference on the role of energy efficiency as a utility system resource.