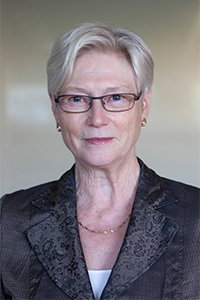 Three new reports from the International Energy Agency offer global insights into future investment needs, the next shale booms and the tremendous energy wasted by our 24/7 devices.

eeting the world's growing need for energy will require more than $48 trillion in investment over the period to 2035, according to a special report on investment released June 3 by the International Energy Agency (IEA). Subsequent reports released since then point to where some of that energy might come from, and where $80 billion worth is being wasted.

"Today's annual investment in energy supply of $1.6 trillion needs to rise steadily over the coming decades towards $2 trillion," said the investment outlook report. "Annual spending on energy efficiency, measured against a 2012 baseline, needs to rise from $130 billion today to more than $550 billion by 2035." 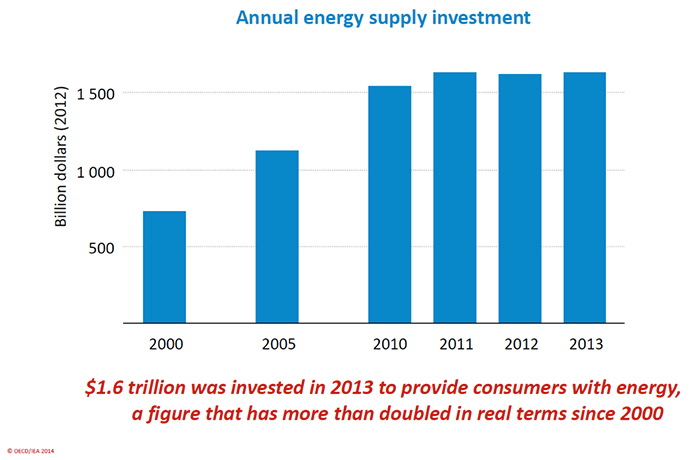 "The reliability and sustainability of our future energy system depends on investment," said IEA Executive Director Maria van der Hoeven. "But this won't materialize unless there are credible policy frameworks in place as well as stable access to long-term sources of finance. Neither of these conditions should be taken for granted. There is a real risk of shortfalls, with knock-on effects on regional or global energy security, as well as the risk that investments are misdirected because environmental impacts are not properly reflected in prices."

Newly compiled data show how annual investment in new fuel and electricity supply has more than doubled in real terms since 2000, with investment in renewable source of energy quadrupling over the same period, thanks to supportive government policies. Investment in renewables in the European Union has been higher than investment in natural gas production in the United States. Renewables, together with biofuels and nuclear power, now account for around 15 percent of annual investment flows, with a similar share also going to the power transmission and distribution network. But a large majority of today's investment spending, well over $1 trillion, is related to fossil fuels, whether extracting them, transporting them to consumers, refining crude oil into oil products, or building coal and gas-fired power plants. 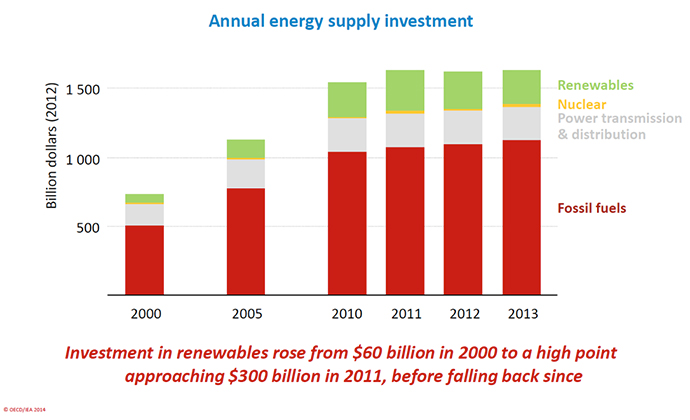 Of the cumulative global investment bill to 2035 of $48 trillion in the report's main scenario, around $40 trillion is in energy supply and the remainder in energy efficiency, says the IEA's outlook report. Of the investment in energy supply, $23 trillion is in fossil fuel extraction, transport and oil refining; almost $10 trillion is in power generation, of which low-carbon technologies - renewables ($6 trillion) and nuclear ($1 trillion) - make up the lion's share; and a further $7 trillion in transmission and distribution. More than half of the energy-supply investment is needed just to keep production at today's levels, that is, to compensate for declining oil and gas fields and to replace power plants and other equipment that reach the end of their productive life. The $8 trillion of investment in energy efficiency is concentrated in the main consuming markets, the European Union, North America and China - 90 percent is spent in the transport and buildings sectors.

Devices Off, Pipelines On

An IEA report released a month later, on July 2, points out why we need so much more energy: The world's approximately 14 billion networked devices such as set-top boxes, modems, printers and game consoles waste $80 billion worth of energy today, and could waste $120 billion by 2020 if measures aren't taken to curb those devices' energy demands.

Studies show that for some devices up to 80 percent of the energy consumption is used just to maintain a network connection. In 2013 such devices consumed more than 600 terawatt hours of electricity. "Implementing best available technologies could reduce energy demand of network-enabled devices by up to 65 percent," says the 176-pp. IEA report " More Data, Less Energy: Making Network Standby More Efficient in Billions of Connected Devices."

The third new IEA report, released June 17, offers a five-year outlook on the oil market that is highlighted by the potential spread of the unconventional oil boom (shale and light, tight oil, or LTO) beyond US shores.

"We are continuing to see unprecedented production growth from North America, and the United States in particular. By the end of the decade, North America will have the capacity to become a net exporter of oil liquids," said van der Hoeven.

With this type of projected growth in networked devices, it only makes sense to implement best practices in their standby energy use today.
Graph courtesy of IEA