A biofuel/biogas project in Denmark is one of 39 projects across the EU benefiting from a unique funding program. 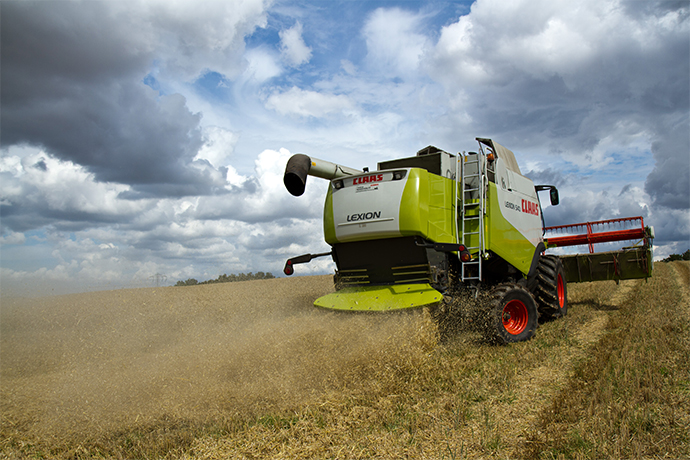 Maabjerg Bioethanol (rendering below) will annually use 300,000 tons of straw and other annual plants to produce second-generation bioethanol, molasses and lignin. That translates to 130 jobs in straw transport alone, with much of it harvested locally (above).
Photo by Thomas Maxe courtesy of MEC
by ADAM BRUNS
W 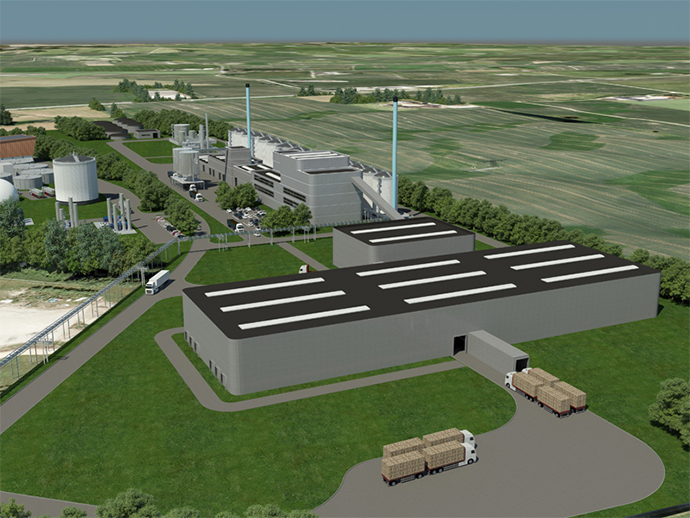 hen UK-based PA Consulting Group earlier this year evaluated 31 countries for their investment potential across 11 different energy technologies, Denmark ranked No. 1, driven in part by its offshore wind and smart metering promise. A new family of projects backed by a powerful team of companies and approved for EU funding this week figures to help the tiny nation stretch that promise into uncharted territory from northwest Jutland.

The EU Commission on July 8 awarded €39 million (US$53 million) from its NER300 program to the Maabjerg Energy Concept (MEC), comprising a consortium of companies including DONG Energy, Novozymes, utilities Vestforsyning and Struer Forsyning and waste management company Nomi. The award was part of €1 billion awarded to 19 different projects by the fund, one of the world's largest funding programs for innovative low-carbon energy demonstration projects. The program's name derives from its own funding from the sale of 300 million emission allowances from the new entrants' reserve (NER) set up for the third phase of the EU emissions trading system.

"With these first-of-a-kind projects, we will help protect the climate and make Europe less energy dependent," said Connie Hedegaard, EU Commissioner for Climate Action. "The €1 billion we are awarding today will leverage some additional €900 million of private investment. So almost €2 billion of investment in climate-friendly technologies here in Europe. This is a contribution to reducing Europe's energy bill of more than €1 billion per day that we pay for our imported fossil fuels."

The NER 300 projects will increase the annual EU renewable energy production and, together with the 20 projects from the first call awarded in December 2012, create several thousand jobs during the construction and operation phases.

Funded projects (see full list below) include the first example of a large-scale carbon capture and storage project in the EU. The UK-based project, which received €300 million, will use oxyfuel technology to capture 90 percent of the CO2 produced by burning coal at the Drax power plant near Selby in Yorkshire, and will store it safely in an offshore storage site in the North Sea.

The €295-million ($400-million) Maabjerg project in Denmark targets commercial-scale production of second-generation ethanol from plant dry matter in Holstebro, in the western part of the country. The plant will also produce lignin pellets, methane and 75,000 tons of liquid waste annually which will be transformed into biogas and injected into the national gas grid after its upgrade into methane.

Some of the MEC sub-projects already exist: the Måbjergværket power plant (opened in 1993 but in line to be revamped) and the Maabjerg BioEnergy biogas plant, which started commercial operation in 2012.

Among other benefits from the family of MEC projects, waste heat will help provide warmth and hot water to some 20,000 homes. Overall, the family of projects on site is expected to create 2,500 jobs during two years of construction. and another 1,000 lasting jobs when production begins, including at least 130 jobs in the transport business, as the plant's requirement of 300,000 tons of straw to produce 80 million liters (21 million gallons) of bioethanol will in turn require 25,000 annual deliveries of straw. In addition, there is about 800,000 tons of biomass (primarily liquid manure), which was already planned for processing at Maabjerg BioEnergy. 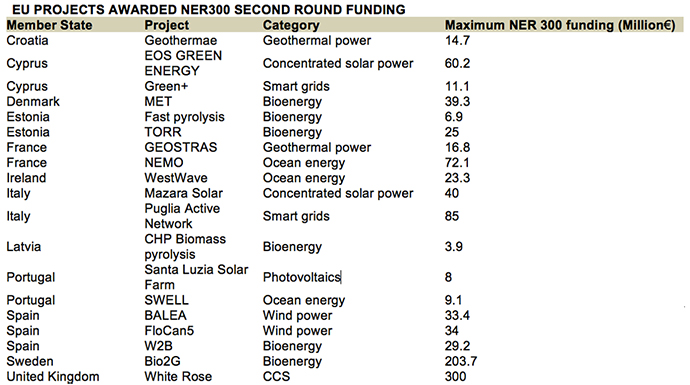 "EU funding is a crucial step," said Jørgen Udby, chairman of the board for the MEC. "But we also need to be sure we can sell the 80 million liters of 2nd generation bioethanol that we plan to make, before we give the go-ahead for construction of our bioethanol plant. To ensure that, we need a political and legal framework setting a minimum level of second-generation biofuel additives in gasoline."

MEC also intends to apply to the EU for construction support through the EU Biobased Industries Public Partnership Program, and to the Danish government for project support and business development aid for the establishment of the pilot plant.

Udby noted that the EU's decision to set a minimum level of 0.5 percent 2G additives by 2020 is a good start, with several member states looking to set a higher level than that for second-generation - or non-food-related - biofuel sources. Unleaded gasoline in the EU today contains 5.75 percent bioethanol, often from food-related sources such as US corn or South American sugarcane. The EU's goal is to fuel 10 percent of transport energy consumption with sustainable energy sources by the year 2020.

"It looks like we won't need further funding, apart from the NER300 award, so all we need now is for EU member states to set ambitious goals for second-generation biofuel additives and a Danish legal framework for large scale production of bioethanol," said Udby.

The third and final update of the Maabjerg Energy Concept business plan is expected in late August 2014. After that final update the consortium expects to make the final "go or no-go" decision, with production starting as soon as 2017.

"Maabjerg Energy Concept is a concrete example of how waste biomass can replace fossil fuels in various ways, and the plant has the potential to become a true biorefinery, an important step along the road to a biobased economy," said Poul Ruben Andersen, vice president for bioenergy at Novozymes, when his company joined the consortium in 2012. "Plants like this could be built all over the world, because they can use many different types of waste as inputs and produce many different kinds of outputs." 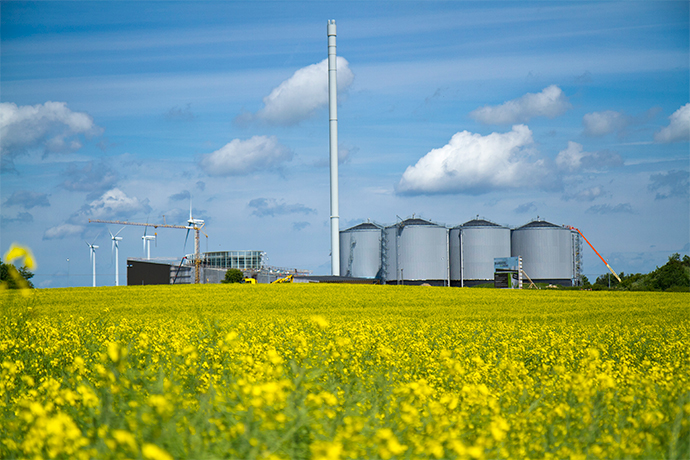 Among the less tangible but powerful spinoff effects of the MEC projects is its role as a showcase for innovation, and a destination for business tourism: The biogas plant Maabjerg BioEnergy (above), which started operating in August 2011, welcomed 5,000 visitors during its first years, including delegations from China, Japan, South America, Australia, Germany and France.
Photo by Thomas Maxe courtesy of MEC