The Thunder may not be in the NBA Finals, but OKC’s GE project win is just beginning to reverberate. 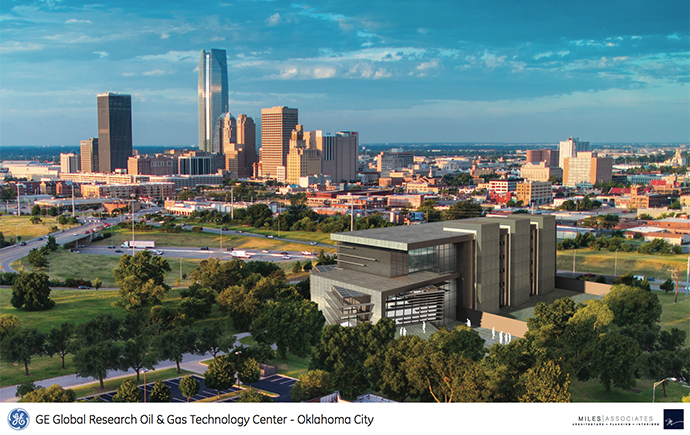 GE’s first-ever Global Research Center dedicated to Oil & Gas technology, located near downtown Oklahoma City, will create 130 high-tech jobs and is expected to have a direct and indirect economic impact of $13 million on the state and local economies. GE has invested approximately $14 billion in its Oil & Gas business globally since 2007.
Rendering courtesy of GE
by ADAM BRUNS
G

E Oil & Gas on May 12 announced a new Technology Collaboration Agreement with Devon Energy Corp. to accelerate the development and testing of products in the field to enhance the performance and economics of unconventional oil and gas projects. Under the alliance, GE will collaborate with Devon on driving technology advancements for artificial lift systems used for increasing the flow of liquids from production wells, advanced drilling technologies and water treatment solutions.

The announcement took place at a groundbreaking ceremony for GE’s new Global Research Center (GRC) in Oklahoma City, a hub for global oil & gas innovation and field testing of products to determine commercial viability. The site was selected in December for the $125-million, 130-job project, after GE had announced Oklahoma as its chosen state in April 2013.

Scheduled to open next year, the Center is part of GE’s three-year effort to triple R&D investment in the oil and gas industry. Focused on accelerating mid- to later-stage oil and gas technologies, the Oklahoma Center will capitalize on its close proximity to GE customers and to an important oil-and-gas-producing region. The Center will focus on solutions related to production systems, well construction, water use optimization, CO2 solutions and energy systems.

“GE is committed to leading the unconventional resource revolution, and technology is the core of how we will win in this space,” said Lorenzo Simonelli, president and CEO, GE Oil & Gas. “Through increased R&D investment, the creation of tech hubs like Oklahoma City and Rio de Janeiro, and new partnership models, we are getting closer to our customers and bringing best-in-class technologies to market quicker.”

Following the announcement of a broad-ranging Chevron GE Technology Alliance in February, GE has recently announced a technology collaboration agreement with PEMEX as well.

GE says its new Oil & Gas Technology Center will attract oil & gas industry influencers from all around the globe and also serve as a focal point for building new working relationships with the State’s university network, including the University of Oklahoma, Oklahoma State University, University of Tulsa and Oklahoma City University.

“Over the past three years, we have worked hard to create more jobs and opportunities for Oklahoma families by strengthening our state’s economy,” said Oklahoma Gov. Mary Fallin. “We’ve also worked to enhance Oklahoma’s reputation as a national leader in energy production and energy-related research. The addition of GE’s new Oil and Gas Technology Center in downtown Oklahoma City is a major victory in that effort.

“Today’s groundbreaking shows the remarkable progress we have made in such a short time to build and establish GE’s technology presence in Oklahoma,” said Michael Ming, general manager of GE’s Global Research Oil and Gas Technology Center. “Our ability to move so quickly would not be possible without the strong support of Governor Fallin, Mayor [Mick] Cornett, the Oklahoma City Urban Renewal Association, and local business and community leaders who have been engaged with us every step of the way.”

With the high-tech jobs GE is creating at the new Center and its ability to attract customers from around the globe, the total direct and indirect economic impact on the state and local economies is estimated to be at least $13 million annually. To date, 25 employees have been hired, with a similar number of job postings waiting to be filled. 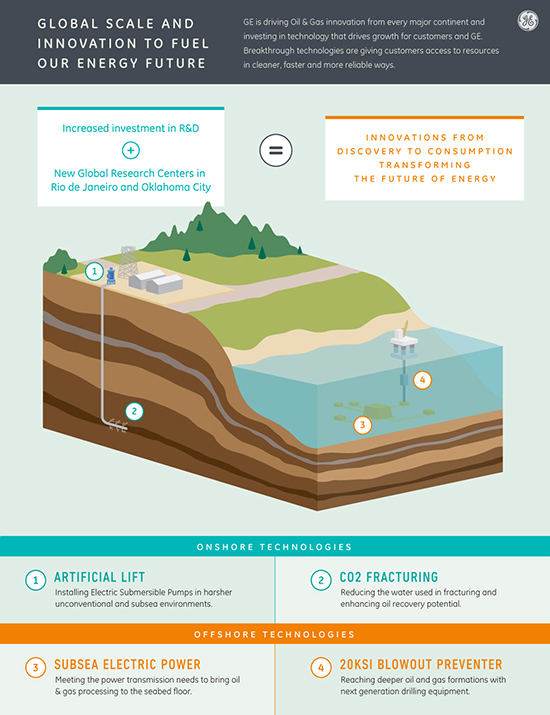