Season in the Sun

What’s happening on the solar frontier? A major investment from Solar Frontier, among other things. 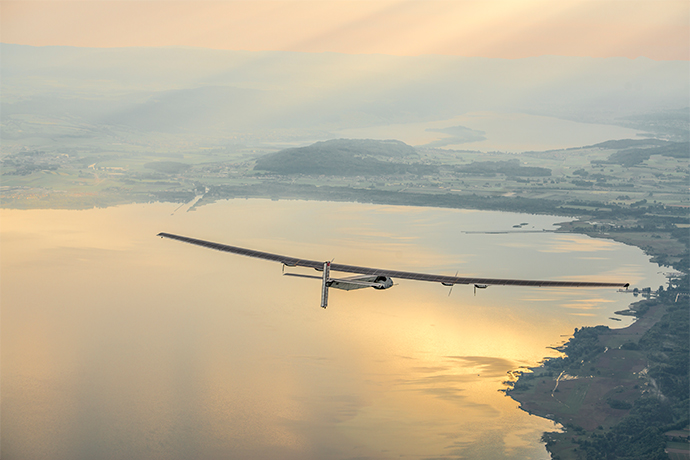 ummer’s here, and the time is right for … global solar innovation.

Test pilot Marcus Scherdel was aloft for two hours and 17 minutes, reaching a maximum altitude of 5,500 ft. (1,670 m.) and an average ground speed of 30 knots (55.6 kmh or 34.5 mph) during the first of several flights planned for the coming months.

“This inaugural flight is an important stage — a step closer towards the round-the-world flight,” said André Borschberg, Solar Impulse co-founder, CEO and pilot. “It is also a huge emotional step for the entire team and all our partners who have worked on the aircraft. Si2 incorporates a vast amount of new technology to render it more efficient, reliable and in particular better adapted to long-haul flights. It is the first aircraft which will have almost unlimited endurance.”

“Throughout such an innovative project, each stage is a leap into the unknown. Today suspense was at a high! The results show that our team of engineers can be very proud of the work it has accomplished during the last 10 years,” said Bertrand Piccard, Solar Impulse founder, president and pilot.

Global CIS (copper-indium-selenium) thin-film PV module manufacturer Solar Frontier K.K. of Japan and the SUNY College of Nanoscale Science and Engineering (CNSE), based in Albany, announced April 22 they have entered into an agreement to explore development and implementation of a joint research, development, and manufacturing initiative in New York State, with the creation of more than 1,000 jobs and more than $678 million in investments projected over seven years.

“Due to increased worldwide demand and forecasts for continued strength in solar panel sales, Solar Frontier has started developing blueprints and making preparations for future manufacturing facilities overseas, including potential sites throughout New York,” said the CNSE announcement. “The collaboration with CNSE represents an important step in Solar Frontier’s plans to establish production bases for its proprietary technology outside of Japan, the company’s home market that currently accounts for 100 percent of its production.” That production is based in Miyazaki, Japan.

“Collaboration would provide Solar Frontier the opportunity for significant growth, by establishing overseas production bases and advancing our company as a global leader in solar energy,” said Hiroto Tamai, president and representative director of Solar Frontier. “And under the leadership of Governor Andrew Cuomo, New York is a leading candidate for an international manufacturing facility.”

The agreement calls for exploring the establishment of a key Solar Frontier plant in western New York and establishing Solar Frontier’s North American headquarters at CNSE. Solar Frontier anticipates the creation of 250 direct research, development, and manufacturing jobs, and 700-1000 indirect jobs from contractors and suppliers expected to locate in and around its New York facilities.

Adding to the appeal was the announcement in late April that CNSE was approved under the state’s new START-UP NY tax abatement program, which gives companies on designated parcels associated with SUNY campuses tax-free status for 10 years.

It’s not the first spot of brightness for western New York. Last November, Gov. Cuomo announced that, as part of his Buffalo Billion initiative, the state would build an anchor hub facility for high tech and green energy businesses at RiverBend in the City of Buffalo, a 90-acre site formerly home to Republic Steel. Two California-based companies — LED lighting manufacturer Soraa and silicon solar cell and module maker Silevo — will collectively invest $1.5 billion into the project and relocate major parts of their operations to the Buffalo High-Tech Manufacturing Innovation Hub at RiverBend from California, creating 850 permanent jobs and at least 500 construction jobs. 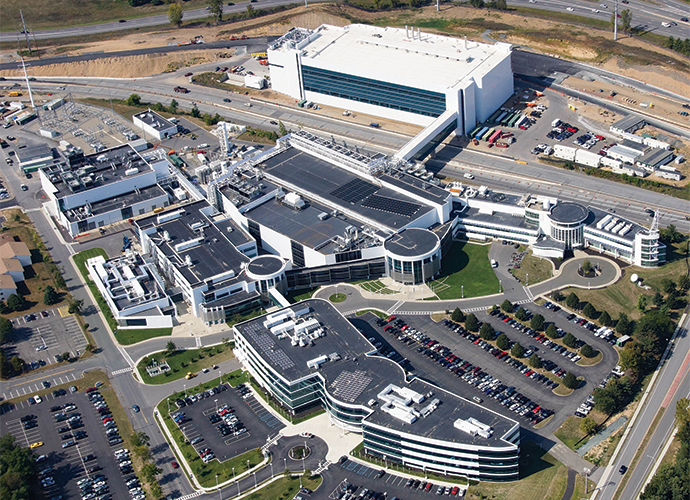 Albany’s SUNY College of Nanoscale Science and Engineering (campus pictured) and Japanese solar PV company Solar Frontier are exploring development and implementation of a joint research, development, and manufacturing initiative in New York State, with the creation of more than 1,000 jobs and nearly $700 million in investments projected.
Photo courtesy of SUNY CNSE

Soraa is relocating its corporate R&D and manufacturing operations to RiverBend, investing $750 million and creating 375 jobs. Silevo, which has a major plant in China, will invest $750 million and create at least 475 jobs at a 200-MW production facility. The state is kicking in $225 million to establish infrastructure; construct 275,000 sq. ft. of facilities for the two companies; and purchase equipment. Neither company is receiving direct funding from the State’s $225-million investment. Additional facilities will be built over time to accommodate new manufacturing companies operating in the field of biotech, high tech and green energy. The facilities and equipment will be owned by the State University of New York (SUNY) Research Foundation. SUNY Buffalo will also benefit from the partnership and contribute to the project’s future growth.

California may have lost those two projects, but it continues to gain solar momentum. At an event with President Barack Obama held at its store in the Silicon Valley high-tech capital of Mountain View, Calif., Walmart on May 9 announced it will double the number of on-site solar energy projects at its US stores, Sam’s Clubs and distribution centers by 2020. The commitment is part of Walmart’s global initiative to drive the production or procurement of 7 billion kWh of renewable energy by the end of 2020.

Over the last few years Walmart has made significant progress toward its goal to be supplied by 100 percent renewable energy. It’s already the No. 1 commercial solar power user, according to the Solar Energy Industry Association.

The Mountain View store currently derives 14.5 percent of its energy from solar systems built and installed by SolarCity, a local California business and one of Walmart’s largest solar vendors. According to SolarCity, its projects with Walmart alone have created an estimated 9,000 construction jobs in the United States, and SolarCity has created an additional 5,000 permanent American jobs since it initiated its first project with Walmart in 2010.

As Walmart and other companies commit to solar, it creates more certainty in the marketplace and encourages others to invest, lowering the cost for everyone. According to Lyndon Rive, CEO of SolarCity, “One of SolarCity’s biggest challenges is that customers are still stuck with the stigma that clean energy is expensive. Walmart’s scale, brand, and leadership is sending the signal that solar is cost effective. Walmart is showing you can be sustainable, and you can do it at prices that meet or beat the price of energy from the grid.”

With today’s commitment, Walmart continues to demonstrate that it can serve more customers while slowing its environmental impact. Since 2005, Walmart’s greenhouse gas emissions grew at only one-quarter the rate of the company’s growth, nearly flat-lining in recent years. With its 2020 energy goals, it anticipates an absolute decline in GHG emissions by 2020 despite significant growth plans over that same time period.

Earlier in the week, Walmart signed on to the US Dept. of Energy’s Better Buildings Initiative, reinforcing the company’s commitment to reduce the energy intensity of its buildings by 20 percent by 2020, compared to a 2010 baseline. The company’s 2020 commitments to scale renewables and accelerate energy efficiency could save the company as much as $1 billion a year in energy costs.

In a May 9 blog, David Ozment, senior director, energy, for Wal-Mart U.S., wrote, “At the end of 2013, we had more than 335 renewable energy projects in operation or under development across our global portfolio. These projects provide our facilities with more than 2.2 billion kilowatt hours (kWh) of renewable electricity annually. Together with renewable electricity from the grid, 24.2 percent of our electricity needs globally are supplied by renewable sources.

“What’s more is that last year we committed to driving the production or procurement of 7 billion kWh of renewable energy globally by Dec. 31, 2020,” he continued. “We’re already 32 percent of the way there, but we’re not finished.”

Among the most recent highlights: 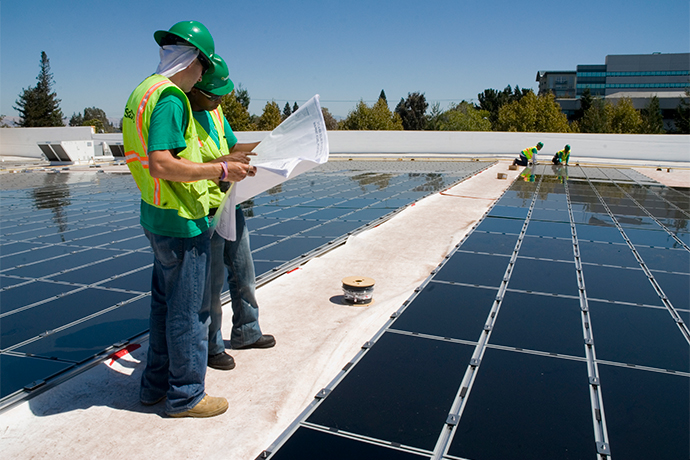 Walmart’s store in Mountain View, Calif., is shown here during a summer 2012 thin-film solar panel installation by vendor SolarCity, which says its projects with Walmart alone have created an estimated 9,000 construction jobs since 2010, and helped SolarCity create 5,000 permanent jobs.
Photo courtesy of Walmart