An eight-month investigation uncovers some facts about
emissions and complaints related to drilling activity in Texas. 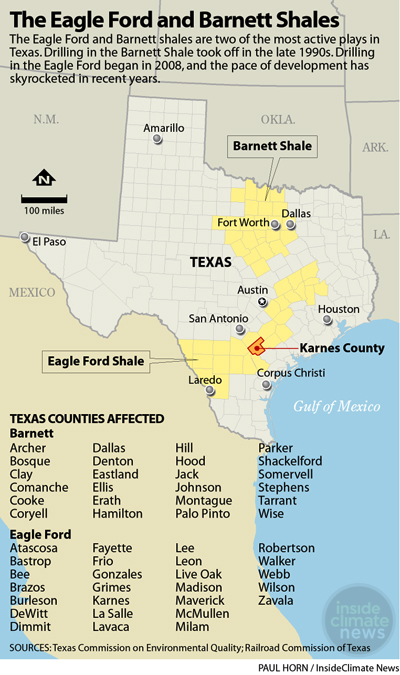 he following story is an edited version of a report released Feb. 18 by InsideClimate News, the Center for Public Integrity and The Weather Channel titled "Fracking the Eagle Ford Shale: Big Oil and Bad Air on the Texas Prairie." The team of reporters includes two Pulitzer Prize winners. The full report may be accessed by clicking here. A related story detailing the positive economic impact of the shale boom in Texas may be accessed here —Ed.

KARNES CITY, Texas – When Lynn Buehring leaves her doctor’s office in San Antonio she touches her inhaler to be sure it’s close.

About 40 miles down the road, flares trailing smoke appear. A yellow-brown haze can fill the horizon as Buehring, 58, passes into Karnes County, where she was born. Today, the ranch house she shares with husband Shelby, 66, is at the epicenter of one of the nation’s biggest oil and gas booms, with more than 50 wells within 2.5 miles.

Known as the Eagle Ford Shale play, this 400-mile-long swath of oil and gas extraction stretches from East-Central Texas to the Mexico border. Since 2008, more than 7,000 wells have been sunk with another 5,500 approved. Energy companies, cheered by the state, envision thousands more. It’s an “absolute game-changer,” an industry spokesman said.

From their porch, the Buehrings can see and smell this gold rush. Three nearby processing facilities have permission to release 189 tons of volatile organic compounds, a class of toxic chemicals that includes benzene and formaldehyde, each year. That’s more than Valero’s Houston Oil Refinery disgorged in 2012. They also are allowed to release 142 tons of nitrogen oxides and 95 tons of carbon monoxide per year.

The regulation of oil and gas extraction falls primarily to the states, whose rules vary dramatically. States also enforce the federal Clean Air Act — a problematic situation in Texas, which has sued the U.S. Environmental Protection Agency 18 times in the last decade.

For eight months, InsideClimate News, the Center for Public Integrity and The Weather Channel have examined what Texas, the nation’s biggest oil producer, has done to protect people in the Eagle Ford. What’s happening in Texas also matters in Pennsylvania, North Dakota and other states where hydraulic fracturing, or fracking, has made it profitable to extract energy from shale. Our investigation reveals a Texas system that protects industry more than the public: 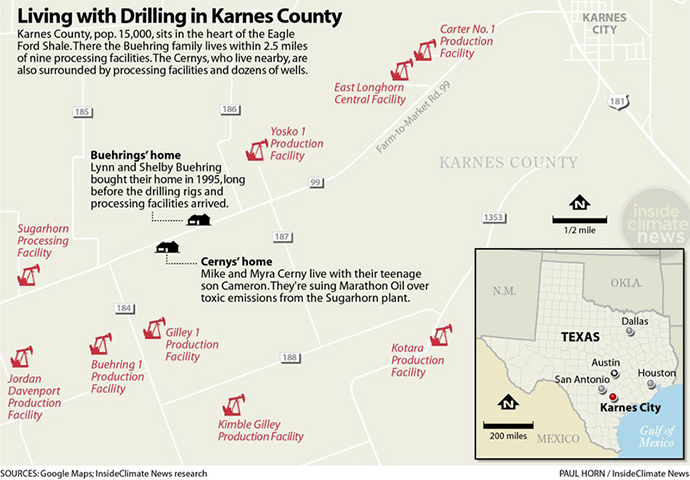 Texas officials are often industry defenders, so residents of drilling areas are usually left to fend for themselves. Oil money is so ingrained in Texas culture that people like the Buehrings tend to become collateral damage.

The Texas Commission on Environmental Quality (TCEQ) is led by three commissioners appointed by Gov. Rick Perry, who favors dismantling the EPA. TCEQ officials often move to lucrative jobs as lobbyists for the industry they regulated. The Texas Railroad Commission, which issues drilling permits and regulates other aspects of oil and gas, is controlled by three elected commissioners who accepted more than $2 million in campaign contributions from the industry during the 2012 election cycle, according to data from the National Institute on Money in State Politics.

“The Eagle Ford Shale is the biggest economic investment zone in the entire world."
— Steve Everley, Energy in Depth

State legislators who regulate the industry are often tied to it. Nearly one in four lawmakers, or their spouses, has a financial interest in at least one energy company active in the Eagle Ford, a Center for Public Integrity analysis of personal financial disclosure forms shows.

"I believe if you're anti-oil-and-gas, you're anti-Texas," Republican state Rep. Harvey Hilderbran said in September.

The TCEQ declined interview requests. In a statement, it said air pollution isn’t a problem. “The air monitoring data evaluated to date indicate that air pollutants in the Eagle Ford Shale area have not been a concern either from a long-term or short-term perspective,” the TCEQ said. “Therefore, we would not expect adverse health effects…” 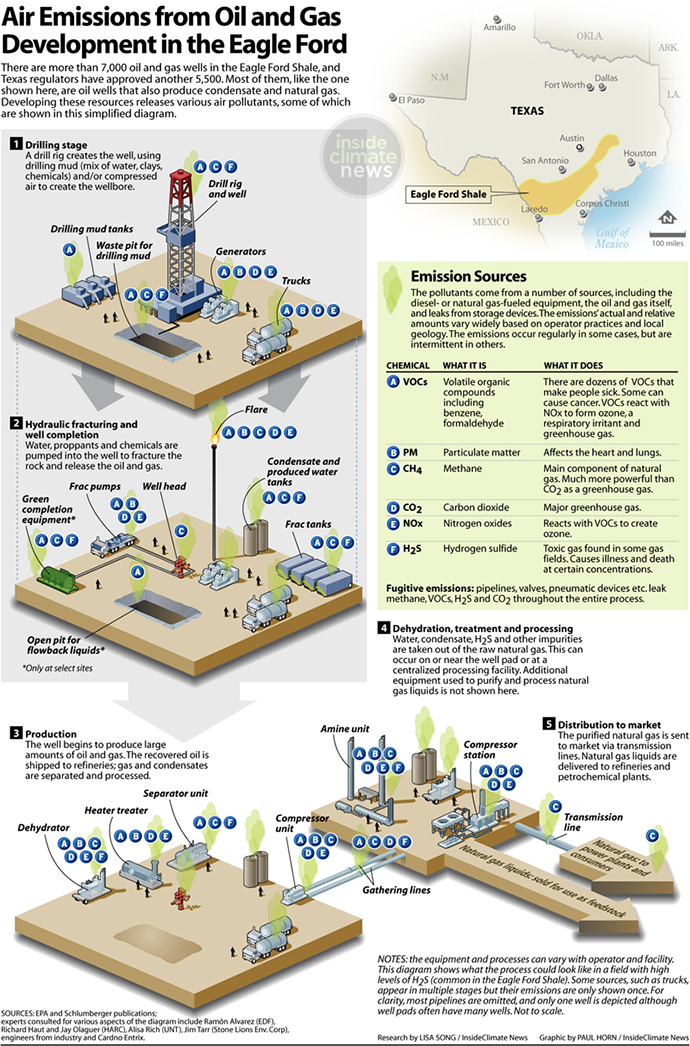 But a memorandum obtained through a public records request indicates the TCEQ knows its air monitoring is flawed. “The executive director has extensive records of underestimated or previously undetected emissions from oil and gas sites. These are not isolated instances but have occurred statewide and indicate a pattern,” Richard A. Hyde, then deputy director of the TCEQ’s Office of Permitting and Registration, wrote in the Jan. 7, 2011, memo. Hyde, now executive director, declined to comment.

Since drilling came to Karnes County, Lynn Buehring’s asthma has worsened. Instead of using a breathing machine once or twice a month, she sometimes needs it every day. She has migraines so intense they've induced temporary blindness.

“There's nothing we can do,” Shelby Buehring said. “Nobody is listening to us ... I hate it here.”

But others say the boom is worth it.

“The Eagle Ford Shale is the biggest economic investment zone in the entire world,” said Steve Everley, who works in Washington, D.C., for Energy in Depth, an arm of the Independent Petroleum Association of America. “I mean, are we going to prevent people from having jobs? Are we going to relegate an entire section of the state to continued poverty or are we going to move forward with economic development?”

This report was jointly produced by InsideClimate News, the Center for Public Integrity and The Weather Channel. For the full report go to http://insideclimatenews.org/. 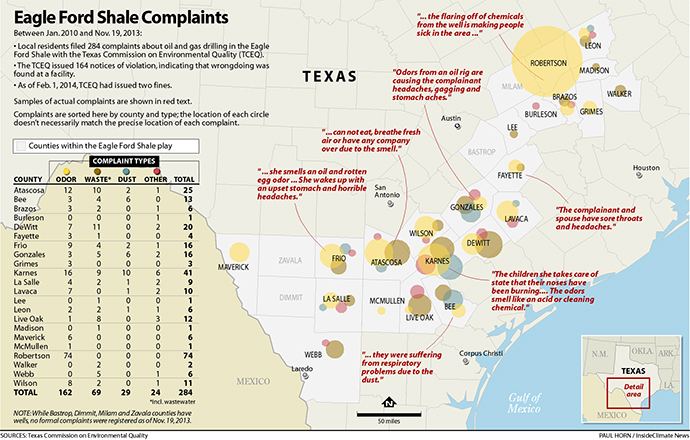 The map above depicts the geographic distribution of complaints to TCEQ about oil and gas drilling activity. As the footnote points out, Bastrop, Dimmit, Milam and Zavala counties host drilling activity, but had received no complaints as of Nov. 19, 2013.