A new deal with a Canadian/Saudi JV could mean billions
invested over the next five years in Nigeria’s oil-rich Delta State. 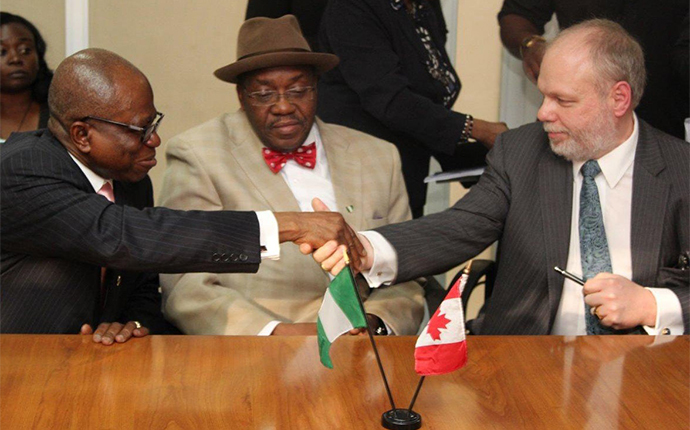 nderstandably overshadowed by horrific human rights news in the country, a major renewable energy agreement was signed last week in Nigeria that could spell a bright future for solar energy in a nation looking for ways to wean itself from overdependence on oil.

It’s a quick timeline: The projects are expected to reach commercial operation in phases starting next year.

The agreements were signed at the World Economic Forum on Africa during a ceremony for a Foreign Investment Promotion and Protection Agreement (FIPA) between the Canadian and Nigerian governments.

"The total capital requirement for these projects is an estimated US$5 billion, which will be financed through a combination of bank debt, development bank financing, and equity partners. Over the life of the projects, it is estimated that more than 30,000 jobs will be created in Nigeria," said Stephen Bordes, CFO of Canada-based SkyPower Global, which has developed several large-scale PV power plants in Ontario and other locations.

"Global partnerships such as these are key to bringing together extensive expertise from around the world," said Kerry Adler, president and CEO of SkyPower Global. "The signing of these landmark agreements demonstrates the shared vision of a partnership that will further stimulate the vibrant, fast-growing Nigerian economy and substantially impact the state and country's GDPs, resulting in increased employment and skills training. We applaud the leadership of the Delta State and Federal Nigerian governments for embracing this initiative and demonstrating their continued commitment to reduce carbon emissions and harness the proven power of solar PV."

"The signing of the Foreign Investment Promotion and Protection Agreement marks a significant milestone,” said Christian Paradis, minister of international development for Canada. “It sends a clear signal to Canadian businesses that they can work in Nigeria with confidence, and to Nigerians that they can do the same in Canada. Our government is looking to new approaches that deliver real results. The private sector has a crucial role to play in creating shared prosperity."

Majority owned by CIM, an urban real estate and infrastructure investment firm, SkyPower has closed on over US$2.5 billion in renewable energy transactions since 2003, raised US$250 million in project financings, and has arranged for corporate debt facilities totaling US$100 million. SkyPower also has secured contracts representing over US$4 billion worth of energy sales to utilities around the world.

With over 300 MW of awarded power purchase contracts, SkyPower has built strategic global partnerships with local developers, international leaders, financiers, suppliers, local communities, and indigenous peoples to produce over 219 million kilowatt-hours of clean electricity to date. Established in 2003, SkyPower has grown to over 135 employees, consultants, and advisors in 35 global offices, supporting development activities in more than 60 countries. SkyPower has pursued a similar large-scale project in Chhattisgarh, India, where in 2012 the firm signed an MOU with Mumbai-based Eastern Power to develop 1,000 MW of solar PV.

In November 2013, SkyPower entered into a joint venture agreement with FAS Energy, a subsidiary of Saudi Arabian retail and real estate giant Fawaz Alhokair Group that is a key stakeholder in the King Abdullah City for Atomic and Renewable Energy. With more than 12,000 employees, Fawaz Alhokair Group is the single largest owner and operator of shopping malls in the Kingdom of Saudi Arabia, managing approximately 1.2 million sq. m. of prime real estate. “This is an excellent opportunity for FAS Energy and SkyPower to join forces to ensure the future of solar energy reaches its full potential in the MENA region,” said Sabri Asfour, GM of FAS Energy.

In the process, they’ll help some of those territories toward economic diversification. Dr. Emmanuel Eweta Uduaghan, governor, Delta State of Nigeria, said the new agreement “represents a continued effort to provide even more clean and renewable energy that can be sustained for decades to come. Delta State: Beyond oil into solar.

“This is very historic and emotional for me,” continued the leader of the Nigerian state also known as “The finger of God.” “For us in Delta State, we have keyed into the green economy program of the global community. The green economy is not just in enhancing the environment but also meant to empower the people.” The state in January kicked off its Delta State Green Economy Commission to help do exactly that. 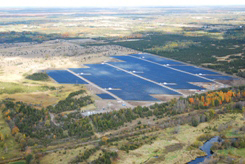 First Light 1 (pictured) and II, in Lennox and Addington County mid-way between Ottawa and Toronto, are the first utility-scale solar farms in Canada. They were developed by Skypower and SunEdison.

Last August, in remarks to the Nigerian Guild of Editors, Dr. Uduaghan noted that moving beyond oil required investment in “key infrastructure such as the 250 megawatts Oghareki power plant, which we hope to commission late 2014. We have major investments in generation and distributions companies that have just been privatized. We have invested in NIPP power plants that have also been privatized. We are attracting international partnership to pursue aggressively opportunities in renewable energy. We are developing both policy and regulatory framework to give comfort and attract investment into our renewable energy sector. The heavy investment in power infrastructure is because it is economically profitable to do so and secondly, we know that it is just the right way to guarantee energy security we urgently need to give Deltans power and to support our industrial base.”