Four-Peat for the Commonwealth

The nation’s leader in energy efficiency, Massachusetts says it’s good for business, as the state’s clean-energy economy continues to grow. 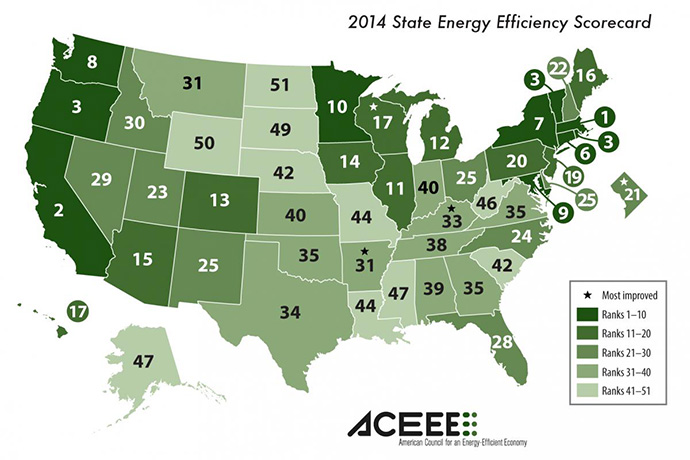 he 8th edition of the State Energy Efficiency Scorecard, released Oct. 21 by the American Council for an Energy-Efficient Economy (ACEEE), reported that Massachusetts continues to edge out California as the most energy-efficient state in the nation for the fourth year in a row. Following these states in the top 10 are: Rhode Island (marking the state's first time in top five), Oregon, and Vermont (all tied for third); Connecticut (No. 6); New York (No. 7); Washington (No. 8); Maryland (No. 9); and Minnesota (No. 10).

"We have treated efficiency as our first fuel," said outgoing Massachusetts Gov. Deval Patrick, "because saving energy, managing costs and reducing environmental impacts while building a stronger cleantech economy helps fulfill our responsibility to future generations to leave a stronger Commonwealth than we found."

Massachusetts earned a perfect score in the Utility & Public Benefits Programs and Policies category of the Scorecard, which accounts for 20 of the Scorecard's 50 points. (The leading states in utility-sector energy efficiency programs and policies were Rhode Island, Massachusetts, and Vermont.) The governor's office said the state's successful programs are the result of collaboration between the Department of Energy Resources (DOER), the Energy Efficiency Advisory Council, energy efficiency Program Administrators and sponsors of Mass Save®.

Among the other tools in Massachusetts' arsenal:

"Energy efficiency's benefits go beyond greenhouse gas reductions and lower energy costs - it has become a true economic driver in the Commonwealth," said Alicia Barton, CEO of the Massachusetts Clean Energy Center. "Because of the investments Massachusetts has made, there are more than 4,000 companies with over 65,000 workers inventing, delivering, and exporting energy efficiency technologies to national and global markets."

The 2013-2015 Statewide Three-Year Energy Efficiency Plans, credited in the report, are expected to deliver energy benefits of nearly $9 billion to residents, businesses, and state and local governments based on an investment of $2.8 billion.

Meanwhile, renewables are doing their part. In 2007, Massachusetts had just over three megawatts each of solar and wind capacity installed. "Today there are more than 650 megawatts of solar installed," said the state, "with a goal of 1,600 megawatts by 2020. The Commonwealth has installed 106 megawatts of land-based wind and [is] poised to be home to the nation's first offshore wind farm." 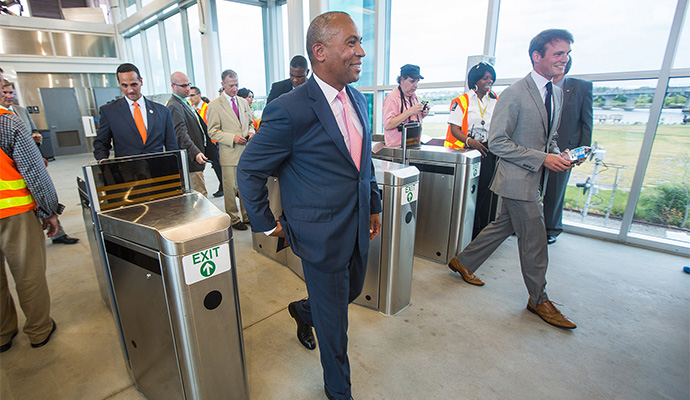 After the opening ceremony of the new Assembly Orange Line MBTA station in Boston Sept. 2, Massachusetts Gov. Deval Patrick rides the T back to the State House. Transit investment and transit-oriented development have been strong focal points for the Patrick administration.
Photo by Eric Haynes courtesy of the Governor’s Office

But the ACEEE scores well for efficiency itself too: It sent a total of 108 requests to state energy offices and public utility commissions for the scorecard, and experienced a 92-percent response rate.

Arkansas, the District of Columbia, Kentucky, and Wisconsin are the four most improved energy-efficiency states for 2014.

Wisconsin rose six places to 17th in the rankings. "Focus on Energy's program efforts are back on track after a shift in program administrators," said the report, "and the state is seeing energy savings rise even as budgets remain consistent. The state is also effectively encouraging the development of combined heat and power." The state scored 2.5 out of five points for its combined heat and power policies. The state has an interconnection standard, and includes CHP as an eligible resource in its renewable portfolio standard. Wisconsin also offers incentives for CHP projects. Nine new CHP installations were completed in 2013.

Other key findings in the Scorecard include:

The states with the most aggressive savings targets include Arizona, Massachusetts, and Rhode Island.

"More and more governors and state lawmakers understand that they have a choice - do nothing as costly energy is wasted, or take action by creating incentives to waste less energy," said Maggie Molina, director of ACEEE's Utilities, State, and Local Policy program. "Smart energy efficiency choices maintain the same comfort, convenience, and quality of life that consumers want and expect. Energy efficiency is also good for business. State action on energy efficiency improves bottom lines, drives investment across all sectors of the economy, creates jobs, and offsets the environmental harms created by the energy production system." 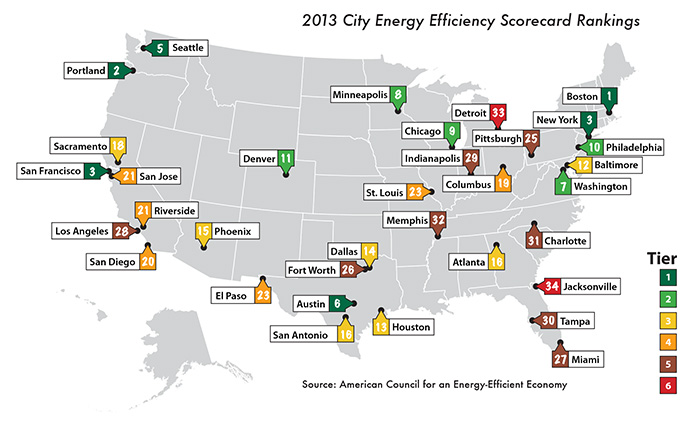 Compare this 2013 ACEEE map showing the rankings of energy-efficient cities to the map at the top of this story to see which metros are succeeding in concert with their states, and which are succeeding in spite of them.
Map courtesy of ACEEE