Waste Not, Want Not

Among other factors, new regulations are helping a $4-billion
project come to fruition in North Dakota. 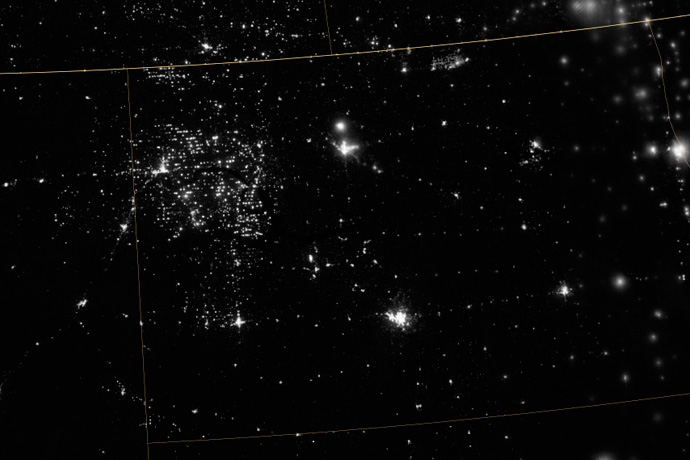 Northwestern North Dakota is one of the least densely populated parts of the United States. But oil and gas activity has set the state literally aglow. This image, captured by NASA on November 12, 2012, shows bright specks associated with drilling equipment, temporary housing near drilling sites and gas flaring.
Photo courtesy of NASA
by ADAM BRUNS
S 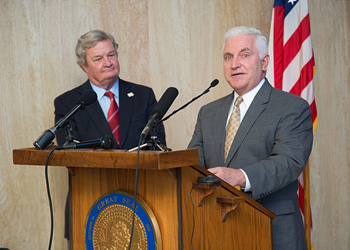 ince early 2010, Site Selection has tracked more than 25 investments in ethylene, polyethylene or polyethylene film and foam production, part of a wave of plastics and petrochemical projects taking advantage of US natural gas availability and pricing. They include $1-billion-plus projects in Texas from Dow, Ineos and Ingleside. But none come close to the projects now moving forward in North Dakota and Louisiana, which come with price tags of $4 billion and $8 billion, respectively.

Sasol's project — see Site Selection's past coverage here — has been heralded by announcements at every significant milestone, the latest of which occurred Oct. 27 when Sasol's final investment decision was announced to develop an $8.1-billion, 500-job petrochemical complex consisting of an ethane cracker and six chemical manufacturing plants near its existing Westlake, La., facilities. (A separate final decision on its gas-to-liquids facility, projected to cost between $11 billion and $14 billion, will come in the next two years.)

The newest entry on the growing list arrived Oct. 13, when North Dakota Gov. Jack Dalrymple, along with William Jeffrey Gilliam, CEO of Badlands NGL, LLC, announced the development of a North Dakota manufacturing plant that will convert ethane — a byproduct of natural gas processing — into polyethylene, which is used to make a wide variety of end-use consumer and industrial plastics. Badlands and its unnamed partners plan to invest $4 billion in the complex, making it the largest private-sector investment in state history. Expected to require about 1,000 acres, the complex will pump out 1.5 million metric tons of polyethylene, or 3.3 billion pounds annually.

Where the Badlands plant is going is still up in the air, says Shane Goettle, the project spokesman from PR and marketing firm Odney who served as commissioner of the North Dakota Dept. of Commerce until joining Odney in spring 2012. Odney's lead tagline? "Business and government work better when they work together." The company also employs Cory Fong, who served for eight years as North Dakota's tax commissioner before resigning in October 2013 to join Goettle at Odney.

"The location has not been decided yet," says Goettle, but one place it won't be is immediately in the busy Williston Basin. "Outside the production area to the east or to the south is the area we're looking in," he says. Badlands' HQ will be in Bismarck.

The lead location factors, says Goettle, are "access to rail, getting ethane to the plant, and where you want 500 employees and their families to live. Those are the big drivers."

Other factors include potential synergies with neighboring operations that could benefit from Badlands' byproducts, such as a refinery or fertilizer plant. "It's attractive to consider that this will probably have some pure industrial-grade hydrogen available," says Goettle. The state has welcomed major fertilizer projects in recent months and Dakota Prairie Refining from MDU Resources and Calumet in Dickinson, about three-quarters complete, will be the first new greenfield refinery to open in the nation since the 1976.

Asked if the importance of rail brings into play the Port of North Dakota in Minot, served by BASF and planning 3,200 acres of expansion, Goettle says the search parameters do bring Minot into play, as well as other communities immediately outside the Williston Basin.

The Port of North Dakota is the largest transportation hub between Seattle and Chicago in BNSF Railway territory, and has primarily served the international export needs of the state's agriculture sector up to this point. The port's expansion includes 45 miles of new track and city utility services, following on a recently constructed highway bypass and a new overpass separating rail and truck traffic.

About one-third of natural gas produced in North Dakota is burned off rather than sold or consumed on site. This summer the state added some regulatory motivation to reduce that figure: A new policy from the state's Industrial Commission establishes oil production limits that will take effect if producers fail to meet requirements to capture natural gas at well sites in the Bakken and Three Forks formations. The policy is part of a six-step plan to reduce flaring that the Commission approved in March, which included a requirement for operators to have a gas capture plan in place.

"Today's policy approval is a dynamic shift in the way regulators approach reducing natural gas flaring," said Dalrymple in July. "The surge in shale gas production has required the Commission to take an unconventional approach at regulations by getting operators to make plans to capture natural gas at day one."

An Oct. 20 report from the US Energy Information Administration detailed the reasons behind North Dakota's actions:

"The rapid growth in North Dakota oil production, which rose from more than 230,000 barrels per day (bbl/d) in January 2010 to more than 1,130,000 bbl/d in August 2014, has led to increased volumes of associated gas, or natural gas that comes from oil reservoirs," said the EIA. "These increased volumes require additional infrastructure to gather, process, and transport gas volumes instead of flaring them. These additions can take time to build, and well operators are often reluctant to delay production."

"The simple answer is that the Industrial Commission's leadership was the most important aspect of reassuring Badlands, our North Dakota shareholders, and potential institutional investors of the viability of our business plan. The math clearly shows ample supplies of ethane, and studies clearly show the need for local uses of ethane in order to accomplish the Commission's goals and objectives.”

Gilliam, based in California, was not available for a full interview. Goettle says Gilliam's background includes chemicals work with Merck and Co. and Calgon. He led a leveraged buyout and turnaround of Texas-based Rexene Corp. that ended messily in 1992 with his resignation as chairman. About four years ago, he began looking at the potential of ethane coming from various oil and gas shale plays around the country. While other active and proposed ethane cracker complexes are all about vertical integration, or adding value to what they already own in feedstock, the North Dakota concept is an outlier.

"They're not operating up here, so there's an opportunity in this market," says Goettle. "This is not a natural gas play up here, this is a crude play. But the ethane component of our byproduct up here is very rich, and there's a lot of it up here."

Goettle explains there are three things to do with the ethane: sell it for its BTU value locally, transport it for sale via the Northern Border or Alliance pipelines to their Chicago terminal locations; or to plants along the Gulf Coast. He says the BTU value is too high for most appliances that burn natural gas, and transportation costs to existing polyethylene plants along the Gulf Coast are prohibitive when plays nearer to that coast can be mined more economically. The best solution? Set up shop in North Dakota.

This graph from the US Energy Information Administration shows the potential for turning flared-off North Dakota natural gas into something more useful.
Graph courtesy of EIA

"Having a local value-added opportunity for the ethane helps free up the distribution lines to consumers as well as sending much more valuable components out of state," he says. "If you're not sending ethane down Northern Border, for example, you have more room for the rest of the natural gas liquids stream. That's why there's a lot of interest in doing something like this here — turning it into milky white plastic beads and moving it by rail to where plastics are made."

Helping Badlands accomplish that feat will be Tecnicas Reunidas (TR), based in Madrid, Spain, and Houston-based Vinmar, which has a 15-year offtake agreement with Badlands.

"We will manufacture the product to their specs," says Goettle of Vinmar. "They will tell us what technology we need to manufacture for their customers. They have strong distribution channels in the US and are a significant player in this project."

TR is no slouch itself. One of the largest petrochemicals and polymers contractors in the world, TR is completing a preliminary engineering analysis that includes technology evaluations, engineering and planning, and final site selection. TR's client roster is a who's who of global petrochemicals, with recent contracts awarded by Fort Hills Energy in Alberta (for a cogeneration plant) and by Petronas for $1.5 billion worth of engineering, procurement, construction and commissioning (EPCC) at the company's major refinery in its native Malaysia.

Asked how the project will be paid for, Goettle says it's not yet the time to identify the investors Gilliam's team has rounded up. He says it's a mixture of equity and debt financing, with the equity consisting of funds from both individual and institutional investors. On the debt side, he says, "We're dealing with the opportunity to do some of this manufacturing in Europe, so there will be export credits involved, guaranteeing some of the financing."

However the project is paid for, Goettle says the potential for natural gas figures to pay off handsomely for his state.

"What's been unleashed with the opportunities with natural gas is really staggering," says Goettle. "I think this is just the beginning for natural gas processing. It's just a tremendous opportunity for North Dakota now, taking a leap forward and adding value."