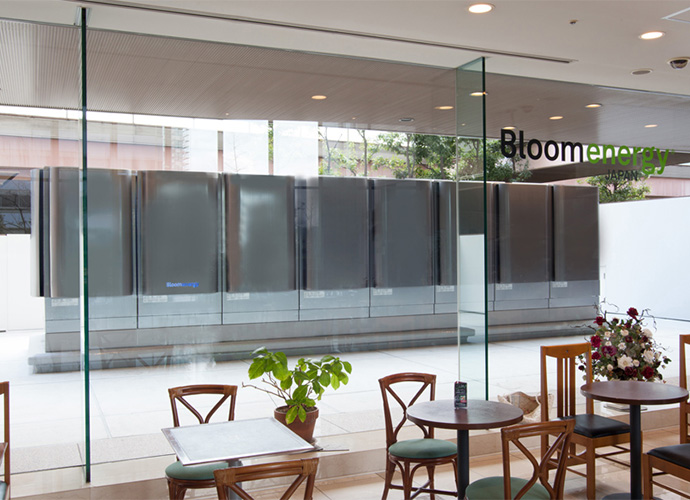 Bloom Energy last year formed Bloom Energy Japan, a JV with SoftBank, which has installed Bloom Energy Servers at multiple locations in its own portfolio.
Images courtesy of Bloom
by ADAM BRUNS
L

ast time we checked in with Bloom Energy, the maker of fuel cell power servers was expanding its manufacturing at its home base in Sunnyvale, Calif., and also building a new manufacturing plant at the former Chrysler facility in Delaware. The past year has seen the company building a global network that features an impressive array of companies as both partners and corporate end-user clients.

In July, Chicago-based Exelon announced it would provide equity financing for 21 megawatts (MW) of Bloom Energy fuel cell projects at 75 commercial facilities in California, Connecticut, New Jersey and New York. The power buyers include new and repeat blue-chip customers, such as AT&T, which will use the fuel cells to power operations at nine sites.

Bloom Energy Servers use solid oxide fuel cell technology to produce electricity from natural gas. They have been installed in many locations that require uninterrupted power supply such as data centers, manufacturing operations, communications, and facilities with high energy loads including refrigeration and critical services.

Exelon is financing the projects through Bloom Electrons™, a service that allows customers to buy power as a service, rather than purchasing the equipment directly. This is the first investment by an energy company in Bloom Electrons, and it will support the program's largest commercial deployment to date. 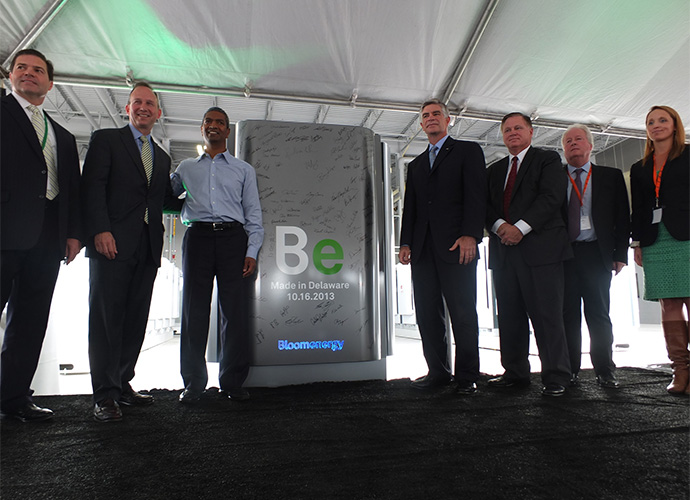 "As a strong proponent of customer choice and innovation, Exelon is always looking for ways to support business customers who want to take control of their energy usage," said Chris Crane, president and CEO of Exelon. "This partnership with Bloom Energy is an extension of our Constellation business, and we are committed to meeting the growing demand for distributed generation with Bloom Energy's clean, reliable, non-intermittent power solution."

Constellation, a leading competitive retail supplier of energy products and services, serves more than two-thirds of the FORTUNE 100. The business unit develops, owns and operates distributed generation for retail customers, including on-site solar, emergency generation and cogeneration. Exelon and Bloom plan to complete the installations in phases over the next year. When completed, the fuel cells will produce enough clean, reliable electricity to power the equivalent of more than 11,000 homes each year.

Last fall, following the July 13 announcement of a new JV called Bloom Energy Japan with SoftBank, Bloom announced the completion of the company's first international project at SoftBank's M-Tower in Fukuoka, Japan. This summer the Japanese JV installed a server at Tokyo Shiodome Building, home to SoftBank Group headquarters, that can produce 200 kilowatts of power and provides 14 percent of the building's overall electricity needs.

"I am delighted that we have installed the Bloom Energy Server at Tokyo Shiodome Building. I believe that this installation at our SoftBank Group headquarters greatly enhances our business continuity capabilities in the event of an emergency. We will continue to promote this innovative, reliable, and safe on-site electric generation method as a clean energy solution for future generations." said Masayoshi Son, SoftBank Group Representative, and main tenant of the Tokyo Shiodome Building.

"Bloom Energy Japan brings a proven on-site electricity generation product that is ideally suited for places that are prone to large scale natural disasters," commented the honorable General Colin Powell, the former US Secretary of State and a member of Bloom Energy's board of directors. "The product offers resiliency, cost predictability for the future and sustainability benefits. I hope that the Japanese government and commercial sector[s] take a serious look at the unit we are unveiling today and consider using the product for their own energy needs."

Some governments are already on board: In March, Virginia-based WGL Holdings, Inc., through its subsidiary Washington Gas Energy Systems, announced a 2.6-MW Bloom Energy project in Santa Clara County, Ca. (SCC). WGESystems will finance, build, own and operate the project and sell all energy generated to SCC under a 20-year power purchase 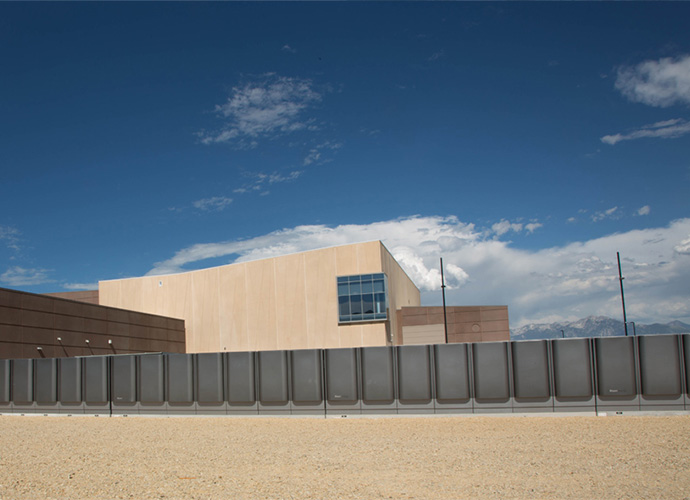 More than 130 MW of Bloom Energy Servers are installed in the United States, including this 6-MW deployment at an eBay data center in Utah. agreement (PPA). The Bloom Energy Servers will generate clean and reliable power using natural gas and biogas, reducing the County's carbon emissions by nearly 5 million pounds each year. WGESystems designs-builds, owns and operates energy solutions that deliver financial, operational and carbon reduction results for non-residential customers across the United States.

"Santa Clara County has been a strong proponent of clean energy, and we are looking forward to having another project right here in our backyard," said KR Sridhar, principal co-founder and CEO of Bloom Energy. "Energy industry partners that are willing to invest in technology projects are key to the development of a clean energy economy, and our partnership with Washington Gas Energy Systems continues to strengthen our ability to provide attractive projects for our growing customer base."

Visions of a Revolution

Macy's, Inc. and Bloom Energy announced in Oct. 2013 the installation of Bloom Energy Servers at Macy's online fulfillment center in Cheshire, Conn. In addition to providing base load 24x7 power to the facility, the Bloom Energy Servers are equipped with an uninterruptible power module which provides business continuity during grid outages. In 2011, businesses in Connecticut experienced approximately 140 hours of outages (excluding major storms). The 600-kW Bloom Energy installation will provide an estimated five million kilowatt hours of reliable electricity each year and backup generation for future grid events. The Clean Energy Finance and Investment Authority of Connecticut (CEFIA) helped provide funding for the project.

Bloom Energy servers are the latest advancement in energy management at Macy's. Through a variety of energy management techniques, the company has reduced its energy consumption by 37 percent over the past 10 years.

"Macy's has made significant progress over the past five years in making our company more efficient, less wasteful and greener, which is important to our customers, associates, shareholders and communities. The more we do, the more we learn about the opportunities for future progress. For the needs of our company's facility at Cheshire - and the realities of the marketplace - we believe a Bloom Energy Server is the cleanest, most efficient and reliable option available," said Macy's, Inc. Executive Vice President Amy Hanson.

Data centers are finding the servers to be a solution too. In addition to a 6-MW Bloom installation at an eBay data center facility in Utah, Louisiana-based CenturyLink last year installed Bloom servers that are expected to produce nearly 4.4 million kilowatt-hours of annual electricity, will help power cloud, managed hosting and colocation services housed within the data center, located in Irvine, California, and operated by Savvis, a CenturyLink company.

"We must explore our energy alternatives to support advancements in technology and the escalating demand for network and IT infrastructure," said David Meredith, senior vice president and global general manager for Savvis. "Bloom's clean fuel cells offer a way for businesses like CenturyLink to promote the continuing evolution of technology without sacrificing their sustainability commitments."

Perhaps the most powerful partner is one who joined Bloom's board in August: Steve Case, co-founder of AOL, chairman and CEO of investment firm Revolution LLC, and chair of the Startup America Partnership.

"Having witnessed firsthand the Internet revolution and the role of disruptive technology, I am excited to participate at the forefront of the emerging energy revolution," said Case. "Bloom is one of the leading energy innovators of our time, enabling the clean, reliable, resilient and affordable power the world needs right now. Being part of Bloom means not only being part of a great company, but also having a beneficial and lasting impact on people's lives around the world." 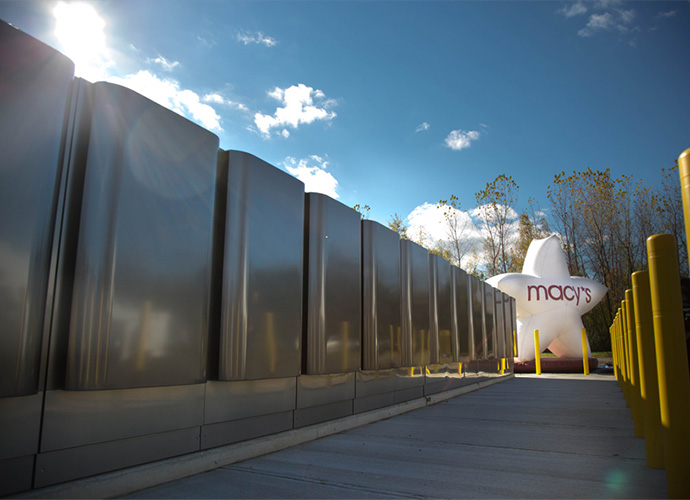 Macy's, Inc. and Bloom Energy announced in Oct. 2013 the installation of Bloom Energy Servers at Macy's online fulfillment center in Cheshire, Conn., in part to provide uninterruptible power during potential grid outages, which have plagued the Northeast in recent years.

AFFORDABLE ENERGY: Where Expanding Companies Can Find Affordable Power (May 26, 2016)