The Arava region in southern Israel will be home to the new Eilat-Eilot Off Grid Hub, in addition to other renewable energy activity.
Photo courtesy of the Eilat-Eilot Renewable Energy Initiative
by ADAM BRUNS
I 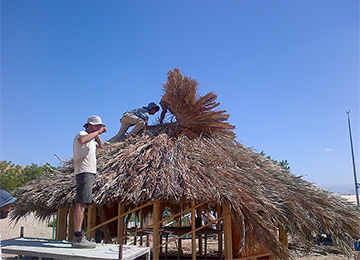 Technologies developed at the new Eilat-Eilot Off Grid Hub will focus on solutions that can be implemented in areas of developing countries that that are not connected to the main power grid.
Photo courtesy of the Eilat-Eilot Renewable Energy Initiative

n 1956 David Ben-Gurion, the first prime minister of Israel, said, "The largest and most impressive source of energy in our world and the source of life for every plant and animal, yet a source so little used by mankind today is the sun … solar energy will continue to flow towards us almost indefinitely."

The Ben-Gurion National Solar Energy Center was inaugurated 31 years later at Sede Boqer in the Negev region, continues today to foster research at six different laboratories, and inaugurated a new building this summer.

The celebration came amid frenzied activity toward fossil fuels in the country. Indeed, while solar seems to be moving forward, Israel's Ministry of Energy and Water Resources is doing all it can to capitalize on new oil and gas discoveries. A projection in May said royalty income from natural resources in Israel by 2020 could approach 10 times the country's total in 2012 by as soon as 2020. According to the Ministry's data, a sharp rise in the state's income is expected in 2018 when production of natural gas begins at the Leviathan natural gas field.

"If scientists at other universities are hurriedly running after new, more lucrative areas of research funding, we at Ben-Gurion will just have to increase our efforts to develop a solar alternative to the madness of fossil fuel," said Professor Emeritus David Faiman, founder of the Ben-Gurion National Solar Energy Center, at the celebration this summer.

Honoring that fact, far to the south where Israel meets the Red Sea, another renewable hub is being launched.

Israel's Eilat-Eilot Renewable Energy Initiative announced last week that it will be launching the Eilat Eilot Off Grid Hub (EE Off Grid Hub), a new technology hub focusing on developing and demonstrating off-grid technologies, during the upcoming Eilot-Eilot Green Energy Conference in December.

The hub will focus on supporting the development of products and technologies that will provide solutions for energy, water and agriculture needs to populations in developing and emerging countries that are not connected to national water and energy grids. Examples of off grid products and technologies that the hub will be aiming to develop include biogas, horticulture, consumption monitoring solutions, energy storage and building concepts.

"The demand for off grid solutions is growing, especially in developing and emerging countries where electricity grids, water systems, sanitization facilities and other traditional infrastructure do not exist," said Tomer Weinstein, director of the EE Off Grid Hub. "By facilitating the development of off grid technologies, we can improve the daily lives of millions of people living in rural as well as urban and peri-urban areas in developing and emerging countries."

The hub will be located on Kibbutz Ketura in southern Israel and will be jointly managed by the Eilat-Eilot Renewable Energy Initiative and the Arava Institute.

"The location of the EE Off Grid Hub on Kibbutz Ketura was selected in part for its close proximity to the Arava Institute, which is the leading institute for environment studies in the Middle East," says Dorit Davidovich-Banet, CEO of the Eilat-Eilot Renewable Energy Initiative and chairperson of the Eilat-Eilot Green Energy Conference. "The Arava Institute has world class research facilities and maintains advanced monitor systems. In addition, the site of the EE Off Grid Hub already had existing field testing facilities from previous activities of the Eilat-Eilot Renewable Energy Initiative." 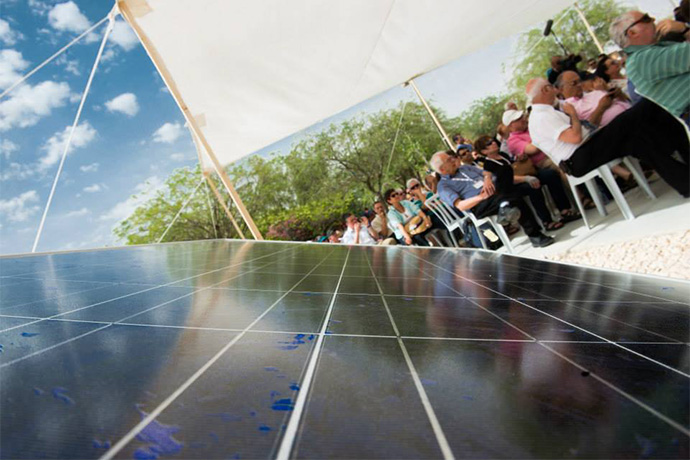 Officials gathered this summer to dedicate the new Ben-Gurion National Solar Energy Center building warned against the rush to develop new shale oil and natural gas finds at the expense of renewables.
Photo courtesy of Ben-Gurion University of the Negev

The overall Arava Valley region - branded as the "Sun Valley for Renewable Energy" - is the only place in the world that produces almost 100 percent of its electricity consumption during the day, say Eilat-Eilot officials. While Israel's renewable energy goal is a relatively modest 10 percent of generation by 2020, the Eilat-Eilot project strives to render the region energy independent, and free of fossil fuel and carbon emissions by 2020. By 2040 the region hopes to be generating 400 MW from renewables for a region expected to grow to 15,000 residents.

The aim of the new hub may be off-grid solutions, but Israel offers one of the densest grids for innovation in the world. And its on-grid solar is taking off too.

In July, the Global Cleantech Innovation Index, jointly produced by the Cleantech Group and WWF, ranked Israel first among 40 countries, followed by Finland, the US, Sweden and Denmark. Describing Israel, the authors wrote that "the country is the cleantech innovation archetype for both embedding entrepreneurial spirit into its educational system and into its society's everyday norms as well as for predisposing its start-ups to resource innovation - as a survival mechanism to overcome resource constraints and energy dependency … The country has demonstrated the greatest density of high-impact cleantech start-ups, as well as a high level of business sophistication and entrepreneurial attitudes, strong venture capital activity, and a good number of environmental patents."

The Central Bureau of Statistics in Israel reports that Israeli tech transfer organizations at universities and institutes (TTOs) saw a 20-percent increase in productivity over the course of 2012-2013. TTOs reported a total of 1,438 inventions and discoveries during that period. And 2013 was a record-breaking year in terms of the amount of capital raised in the high-tech industry, with 662 Israeli high-tech companies closing financing rounds. A total of $2.3 billion worth of capital was raised, a 13-year high.

Curiously, Invest In Israel's list of industry sectors does not include energy or the all-embracing cleantech. But the country's unique geography, limited natural resources and R&D profile make energy innovation a target for any company. According to the Israel Export & International Cooperation Institute, ‪solar water heaters were invented in Israel in 1955 by Harry Tabor, and today 95 percent of the country uses them, saving between 4 percent and 7 percent on power consumption.‬

Site Selection's New Plant Database shows mostly semiconductor, R&D, and life sciences investments in Israel over the past five years, led by Intel's mammoth investments in Kiryat Gat - $10.8 billion over the past 40 years, plus a $6-billion investment announced this summer. One multinational energy investment came several years ago from Siemens, which plunged $67 million into a 150-job expansion of a concentrated solar power product manufacturing facility in Beit Shemesh. However, in June 2013, the company laid off most of the employees as the cost and business case for thermosolar made it untenable.

But that doesn't mean concentrated solar power production can't happen there. Last summer, Spain's Abengoa and Shikun & Binui, an Israel-based global infrastructure group, were nominated by the State of Israel as successful bidders in the BOT tender of the Ashalim concentrating solar plant. Negev Energy, a joint company created by Abengoa and Shikun & Binui, will build, own and operate a 110-MW solar trough plant with storage located in the Negev desert. Electricity will be purchased by Israel Electricity Corporation over a 25 year power purchase agreement. Construction is expected to start this year in the Ashalim area of the Negev Desert once the power purchase agreement and the project financing are closed.

Meanwhile, in July, Megalim Solar Power Ltd - a special purpose company formed by Alstom, BrightSource and NOY Infrastructure & Energy Investment Fund - obtained the financing of the European Investment Bank and the Bank Hapoalim for the construction and operation of the Ashalim Thermal Solar Power Station in Israel. Megalim and the State of Israel signed a 25-year power purchase agreement in November 2013. Scheduled to be complete in 2017, the project will employ approximately 1,000 people during construction.

The 121-MW project will make use of BrightSource's concentrating solar power (CSP) tower technology similar to that used at the Ivanpah project in Southern California. More than 50,000 computer-controlled heliostats or mirrors will track the sun in two axes and reflect sunlight to a boiler on a 240-meter tower. Located on a 3.15 sq. km. (1.22 sq. miles), the Ashalim 121 MW solar plant will generate enough power to meet the electricity needs of more than 120,000 homes. The Megalim and Ashalim projects, combined with a separate PV project, are expected to generate 270 MW altogether, or about 1 percent of Israel's overall power needs. 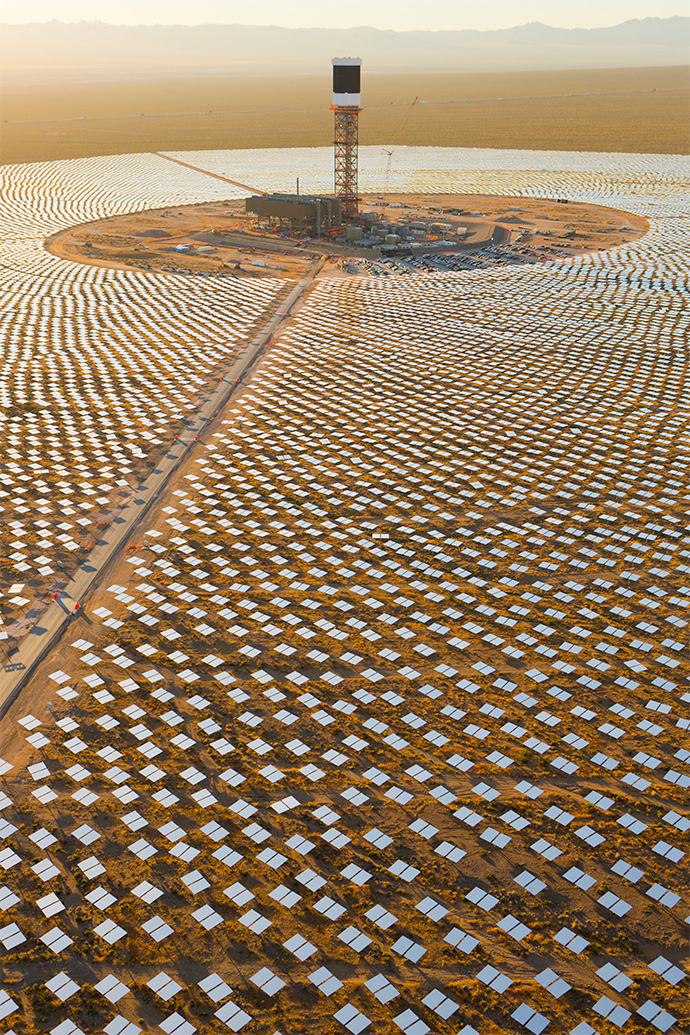 The Megalim thermal solar power station in Israel is projected to be completed in 2017, and will feature BrightSource technology similar to this working power plant at Ivanpah in California’s Mojave Desert.
Photo courtesy of BrighSource