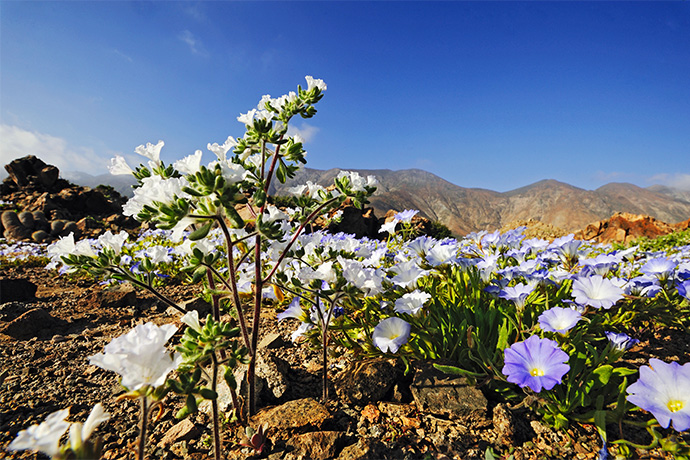 The clear air of the Atacama Desert, shown here in bloom, has made it a target for major telescope locations (such as the European Southern Observatory) as well as new solar development.
Photo courtesy of ESO
by ADAM BRUNS
A

country whose name, according to some, derives from a word meaning "ends of the earth," is seeing plenty of new beginnings in the renewable energy sector, even as its mining heritage continues.

In late June, First Solar announced it had received board approval from the Overseas Private Investment Corporation (OPIC), the US Government's development finance institution, and IFC, a member of the World Bank Group, for financing to support construction of the 141-MW Luz del Norte solar power plant in Chile's Atacama Desert, which receives some of the planet's steadiest concentrations of direct sunlight. The loans, closed in late August, clear the way for First Solar to proceed with construction planning at the 1,127-acre (456-hectare) site, located 37 miles (60 km.) from the city of Copiapo.

The Chilean government's National Energy Strategy includes expansion of the country's renewable energy capacity to 20 percent of its total generated power by 2025. Energy from Luz del Norte will be supplied into the Chilean Central Interconnected System.

"The Latin American region has a growing need for innovative and efficient energy solutions right now," said Tim Rebhorn, senior vice president, Americas, for First Solar, in June. "Chile's Luz del Norte project is the first of many opportunities we are pursuing in this region, and the support we've received from OPIC has been instrumental in bringing the project to life."

"The Luz del Norte project is an important step in furthering solar power development in Chile, where the potential for this clean, renewable resource is unrivalled," said Elizabeth Littlefield, OPIC's President and CEO. "OPIC is proud to support this investment in Chile while helping an innovative American company like First Solar expand its operations and create new markets for its products abroad."

OPIC, as the US Government's Development Finance Institution, operates in 102 countries and manages an $18-billion portfolio of financing and insurance to support private investment in sustainable economic development, especially in the world's poorest countries. Under Littlefield's leadership, OPIC's annual commitments to renewable resources projects grew 10-fold in three years to $1.5 billion, while generating increasing income for the federal budget - a number that reached $426 million in 2013.

The infrastructure in Chile is welcoming air as well as light. 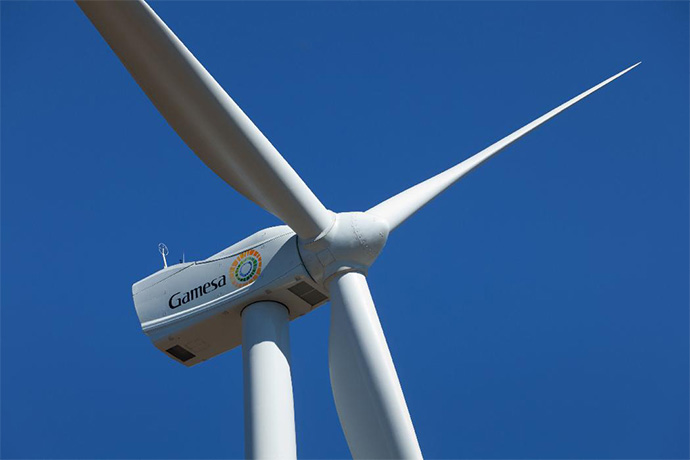 Gamesa turbines similar to this offshore unit in Spain are now in operation at the San Pedro Chiloé in southern Chile.
Photo courtesy of Gamesa

In August, Gamesa, Spain's biggest wind turbine maker, completed turnkey construction of its first wind farm in Chile, the 36-MW San Pedro Chiloé wind farm, for the local company Transantartic. The project is located on Chiloé Island, in the southern part of Chile.

"The successful commissioning of its first project in Chile marks the establishment of Gamesa's commercial presence in a wind market with great potential," said Gamesa in a statement. "According to the most recent wind report by Navigant's BTM Consult, Chile had 413 MW cumulative installed by the end of 2013 and, supported by high energy demand, is expected to reach 1.5 gigawatts cumulative installed by 2018."

The wind farm features 18 Gamesa turbines. Construction for the project began in January 2013 and included the development of all necessary civil works and infrastructure for the project, including more than 20 km. (12.4 miles) of roadway, an electrical substation, a 25-km. (15.5-mile) high-voltage transmission line and a bridge. As part of the project, Gamesa will provide comprehensive Operations and Maintenance (O&M) services for the wind farm for a period of 12 years.

Gamesa is also present in other Latin American countries, including Mexico, Honduras, Argentina, Uruguay and Costa Rica, and has installed more than 2,000 MW of turbines throughout the region. Latin America accounted for 36 percent of the company's 2014 first semester revenue.

In late August, the onset of renewables reached the presidential level, as Michelle Bachelet, the president of Chile, together with Jean-Paul Luksic, chairman of Antofagasta Minerals SA, and Mike Garland, CEO of Pattern Energy Group Inc., officially opened operations at the 115-MW El Arrayán wind facility in a grand opening ceremony at the project site, located 400 km. (nearly 250 miles) north of Santiago on the coast of Chile.

The president of Chile, Michelle Bachelet, said "I'm very happy to be here today because this project is important for our present and future energy needs. El Arrayán is the biggest wind farm in Chile and we are pleased at what we can achieve when we use the natural resources the earth has to offer. This project is another step toward meeting our energy agenda objectives."

The facility is located on approximately 15,320 acres (6,200 hectares) of coastal land on a long-term lease with a single landowner. Approximately 200 jobs were created during construction, as well as up to 15 ongoing permanent positions. The project was constructed by Skanska Chile SA. It connects to the Sistema Interconectado Central's 220-kV transmission system.

According to a policy statement issued in May, 45 percent of electrical power generation installed between this year and 2025 must come from renewables, in order to help the country meet its 20-percent overall goal.

"Chile is a great market because of the President's strong support for renewable energy policies, the country's strong, stable economy and excellent natural wind resources, which can supply domestic energy to the country," said Mike Garland, CEO of Pattern Energy. "We are also especially pleased to be here with our strong partner AMSA, which is demonstrating to the world that a global mining company can be a leader in clean, domestic energy."

The El Arrayán Wind facility, which completed construction in June, will generate clean, renewable power equal to the needs of approximately 200,000 Chilean homes each year, according to the World Bank. The facility is utilizing 50 Siemens 2.3 MW wind turbines, which Pattern Energy is also using at other wind projects in Canada and the United States.

Pattern Energy owns 70 percent of the El Arrayán Wind facility, which it also operates. AMSA owns the remaining 30-percent minority stake. The project sells approximately 70 percent of its output to Minera Los Pelambres through a long-term fixed-for-floating hedge. The facility sells its remaining output into the Chilean spot market at the prevailing market price at the time of sale. In addition to its minority interest in the facility, AMSA is the controlling party of Minera Los Pelambres, a major copper and molybdenum mining operation located in the Coquimbo region.

Last week, SunEdison announced the closing of a long-term energy sales agreement with AMSA by which Sun Ediston will supply power from the 69.5-MW, 180-hectare Javiera solar farm to Los Pelambres operations. SunEdison-based Terraform Power has the rights to purchase the project once it is operational in 2015. The contract between the two companies will be valid for 20 years.

"Today we celebrate the agreement between two global leaders in their respective industries who believe in a more sustainable future for Chile companies," said José Pérez, president of SunEdison for Europe, Middle East, Africa and Latin America.

Robert Mayne-Nicholls, general manager of Minera Los Pelambres, said the project would help the company reach its own goal of supplying over 30 percent of its power needs through renewables. 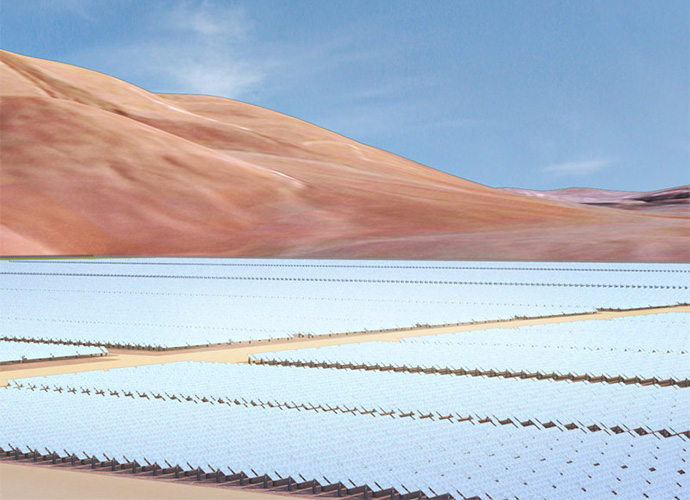 A rendering of the forthcoming solar facility from SunEdison at AMSA’s Minera Los Pelambres mining operation.