The Globe and Mail reports that new leadership at Malaysian giant Petronas and lower cost projections may breathe new life into delayed LNG export projects in BC.

The American Recovery and Reinvestment Act of 2009 provided funding for smart grid projects across the United States. This deep and handy resource contains information, locations and data for each project. Click on a location on the map, the name of a project, or use the search feature to view the project information.

Following on US Secretary of State John Kerry's visit to an economic development conference in Egypt, Euroconvention Global is hosting its 2nd Egypt Power Infrastructure & New Energy Investment Forum in Cairo April 29-30. Egyptian Minister of Electricity and Renewable Energy Mohamed Shaker expects domestic and foreign companies to invest $6 billion in the country's new energy sector over the next years.

Gov. Terry McAuliffe announced March 24 that Virginia is the first state in the nation to receive a wind energy research lease in federal waters from the United States Bureau of Ocean Energy Management (BOEM).

The late March opening of a $22-million, 50,000-sq.-ft. (sq.-m.) regional operations center for the electric grid in West Little Rock, Ark., marked a significant step forward for the energy sector in the region. The operation center, run by the Midcontinent Independent System Operator (MISO) will control part of a 15-state region stretching from the Gulf of Mexico to Manitoba, Canada. The company’s initial set of approximately 42 employees are primarily experts in engineering and technology, adding to thousands of existing jobs at high-tech companies throughout Arkansas.

“We hope to use our presence here not only as a resource to the greater Little Rock community, but as a magnet for other energy-sector firms,” said John R. Bear, president and CEO of MISO. “Little Rock can become a major center for science, engineering and technology jobs which will mean a bright future for the city and enhance Little Rock’s reputation as an energy capital.”

Oops. The EPA and the U.S. Department of Justice (DOJ) announced in March a settlement with Utah-based Washakie Renewable Energy that resolves allegations that the company generated more than 7.2 million invalid renewable fuel credits worth more than $2 million. From January to October of 2010, Washakie generated more than 7.2 million Renewable Identification Numbers, or RINs, and reported to EPA that it produced biodiesel associated with those RINs at its Plymouth, Utah facility. "During that time, however, Washakie did not produce any biodiesel at the Plymouth facility," says the EPA. Washakie has purchased and retired from the market an equivalent number of RINs, which achieved this reduction of emissions. Washakie will pay a $3-million penalty under the settlement. For more information on the Renewable Fuel Standards, visit: http://www.epa.gov/oms/fuels/renewablefuels/. 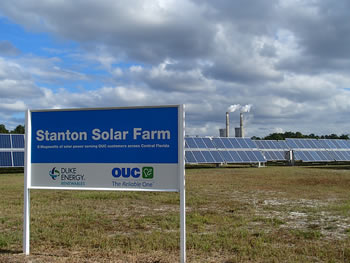 Over the past eight years, Duke Energy has invested more than $4 billion in wind and solar facilities in 12 states, including the company's Stanton Solar Farm located in Orange County, Fla.
Photo courtesy of Duke Energy

Plenty of real renewable energy is apparently on its way in Florida from Duke Energy, which plans to add up to 500 MW of utility-scale solar in Florida by 2024. The addition of solar was filed as part of the company's 2015 Ten-Year Site Plan proposed to the Florida Public Service Commission (FPSC). Construction of the first site — up to five MW — will begin later this year with 35 MW expected to be completed by 2018. The new solar energy facilities will complement already planned investments by Duke Energy Florida to build a state-of-the-art, highly efficient combined-cycle natural gas plant in Citrus County, upgrade its combined-cycle Hines plant in Polk County and purchase Calpine's Osprey plant, also in Polk County. The company plans to invest $2 billion to $3 billion in renewable energy in the next five years.

REMI has prepared a report on the potential impact of a carbon tax on the Green Mountain State for Energy Independent Vermont, a coalition of environmentalists, nonprofit organizations, and businesses urging the adoption of such a policy. REMI simulated the potential economic, fiscal, and environmental impacts of a carbon tax on the state over time.

Fluor Corp. was named as a 2015 Award Finalist by the Edison Awards for Fluor’s 3rd Gen Modular Execution approach. "Clients benefit from the 3rd Gen Modular ExecutionSM approach through reduced material quantities associated with reduced facility footprints, productivity gains for work shifted to shop and reduced costs for field labor," said Fluor in announcing the honor. "Compared to traditional project execution methods, 3rd Gen can lower total installed costs for owners by up to 20 percent." Fluor is implementing the approach on numerous projects, including the 1 million ton-per-year Shell Quest carbon capture facility in Alberta, Canada, profiled in the Site Selection Energy Report in December 2011, which Fluor completed at the end of 2014. 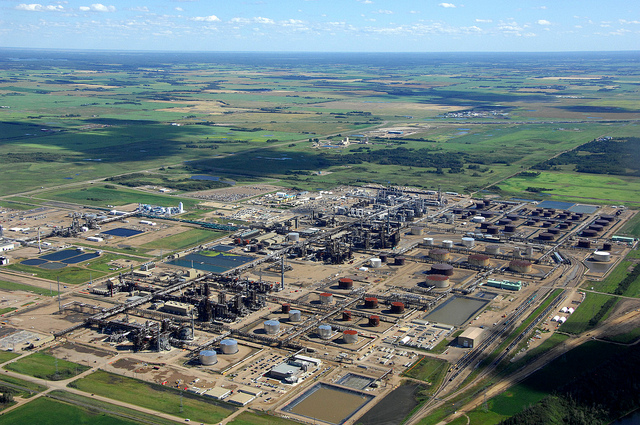 Shell Scotford, near Edmonton, Alberta, includes a refinery, chemicals plant and oil sands upgrading facilities capable of producing 255,000 barrels per day of synthetic crude. Quest will capture and store more than 1 million metric tons of CO2 per year from the Scotford Upgrader beginning in 2015 – which represents up to 35 percent of the direct emissions from the Upgrader.
Photo courtesy of Shell