Sasol breaks ground for its nearly $9-billion investment in Southwest Louisiana, and continues to break new ground in workforce development. 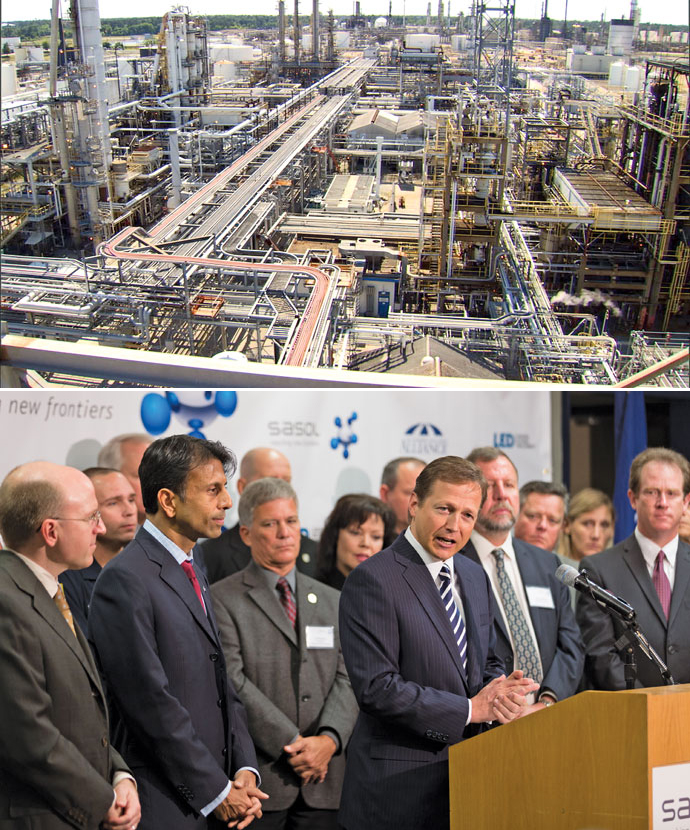 Sasol President and CEO David Constable, accompanied by Louisiana Gov. Bobby Jindal, announced in December 2012 the company's investment intentions for both an ethane cracker complex and a gas-to-liquids complex at the company's existing site in Westlake, La. (above). The GTL investment is currently on hold as the company conserves cash in response to lower international oil prices.
2012 photos courtesy of LED
by Adam Bruns

Sasol broke ground March 27 on its ethane cracker and derivatives megaproject near Westlake, La., a facility that will roughly triple Sasol’s chemical production capacity in the United States. It's part of $85 billion in projects either announced or underway in the five-parish region.

"By the time construction is complete in 2018, Sasol’s investment will total almost 9 billion dollars, making it one of the largest investments in our company’s history,” said Steve Cornell, Executive Vice President of International Operations for Sasol. "Along the way, we’ll create more than 5,000 construction jobs and more than 500 full-time positions, 100 of which have already been filled.”

Louisiana Economic Development (LED) says those new jobs will carry an average annual salary of $88,000, plus benefits, and estimates the project will result in 2,395 new indirect jobs, over and above the construction jobs. A number of Louisiana contractors have already signed on for work representing about $1 billion in contracts.

The complex will use abundant U.S. ethane to manufacture a diverse slate of commodity and specialty chemicals for markets around the world. Early works activities, site preparation and civil construction work have been underway since 2014. Site aboveground work and heavy equipment deliveries will begin in 2015 and mechanical, electrical and instrumentation work in 2016 and 2017, says Sasol, with the goal of achieving beneficial operation in 2018.

Ethane "cracking” is the process of converting molecules of ethane extracted from natural gas to create ethylene, one of the building blocks of the petrochemical industry. About 10 new US cracker projects are in various stages of internal and external approval, but only a few have moved dirt, including the Chevron Phillips Chemical project at its Cedar Bayou site in Baytown, Texas, which broke ground last spring and aims for completion in 2017.

The Sasol facility will produce approximately 1.5 million tons of ethylene per year. The ethylene will be used in six new downstream plants to produce a range of high-value derivatives used in everyday products such as synthetic fibers, detergents, fragrances, paints, film and packaging.

Sasol's board gave the go-ahead for the cracker on October 27, 2014. On December 22, 2014, the company announced the completion of a $4-billion credit facility for the project involving a syndicate of 18 international banks and other financial institutions.

The cracker is one of two projects announced in December 2012 during the feasibility stage, with the other being a large-scale gas-to-liquids (GTL) facility that would increase the total number of new direct jobs to more than 1,250. Sasol announced in January that it is delaying a final investment decision on the GTL plant, as part of a comprehensive plan to conserve cash in response to lower international oil prices.

It's been four years since LED’s Business Expansion and Retention Group joined the Southwest Louisiana Economic Development Alliance and the Port of Lake Charles to identify potential sites for Sasol, ultimately homing in on a 650-acre site near Sasol’s existing Westlake facilities.

To secure both the GTL and the ethane cracker projects, Louisiana offered Sasol a performance-based grant of $115 million for land acquisition and infrastructure costs associated with the facility. Sasol must develop the GTL project to receive that incentive. The company will receive the services of the LED FastStart training proram. In addition, the GTL project will qualify for Louisiana’s new Competitive Projects Payroll Incentive while the ethane cracker project will qualify for the Quality Jobs Program, with the payroll incentives applied for up to 10 years.

To support Sasol’s workforce needs during construction and operations, the state is investing $20 million in a new training facility and associated equipment focused on industrial technology at SOWELA Technical Community College in Lake Charles. Gov. Company and state officials broke ground on that SOWELA Sasol Regional Training Center in October 2014.

"As our operations grow in Louisiana so too will our presence and involvement as a corporate leader and a contributing member of the community," said Sasol President and CEO David Constable last October. "Our specific focus, over the years, has been on education and workforce enhancement and economic development."

"We have to more than double what is already a very large workforce."
— Mike Thomas, Senior Vice President, US Operations, Sasol

On top of all that, Constable in October announced that Sasol, in partnership with the Louisiana Small Business Development Center at McNeese University and the Southwest Louisiana Entrepreneurship and Economic Development (SEED) Center Small Business Incubator, would sponsor the development of a small business resource guide.

At the SelectUSA Investment Summit in late March, Mike Thomas, senior vice president of US Operations for Sasol, described the challenges of such a large undertaking.

"We have to more than double what is already a very large workforce, across the very wide range of capabilities, skills and job requirements to run a site like that," he explained. "We reached out to other colleges and communities to essentially establish connections," including schools beyond the direct community such as LSU. "We have to onboard a full range of employees, from laborers to PhD scientists. It takes a full spectrum of recruitment techniques, and frankly reaching out to every dimension of our community to identify where those resources come from — they don't all come from one place, they come from everywhere."

The company has been tightly engaged with the training curriculum, helping SOWELA define exactly what is needed. Finding ways for the local underemployed workforce to be "skilled up" is part of the mission, he said, in order to maximize the benefit for the region.

"It's not just training for Sasol and what we need," Thomas said. "It's giving people the skills they need across the board so they can enter the workforce. Identifying that full range of skills is very critical ... We have 10,000 people either underemployed or unemployed. We've created a program that gives these people the opportunity for training."

At the same time, with so many projects underway, workforce cannibalization "is something we're keenly attuned to," Thomas said. Participating with fellow companies in groups such as the Louisiana Chemical Association and the Lake Area Industry Alliance helps.

"We have to build the regional workforce," said Thomas. "Otherwise we'll fail and it will have a significant impact on our neighbors. We've been in that community for over 50 years, and we'll be there another 50 or 60 years. We want that community to thrive also." 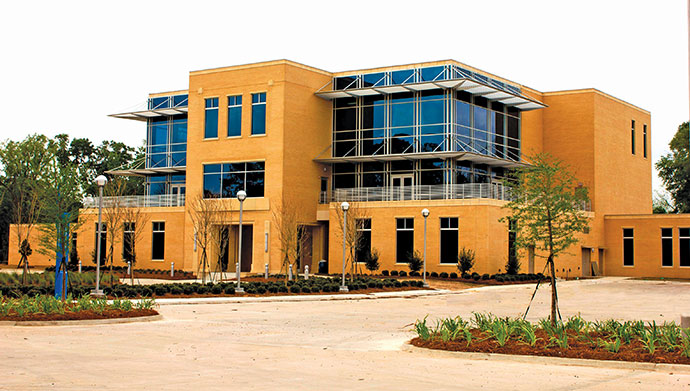