Thoughts on the Renewable Energy Internet

Economic and cultural theorist Jeremy Rifkin published his seminal work "Entropy" 35 years ago. His ideas about the future, however, are not winding down at all. 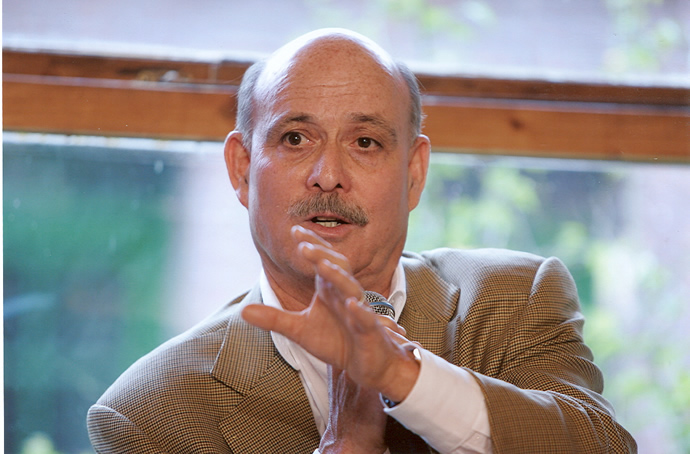 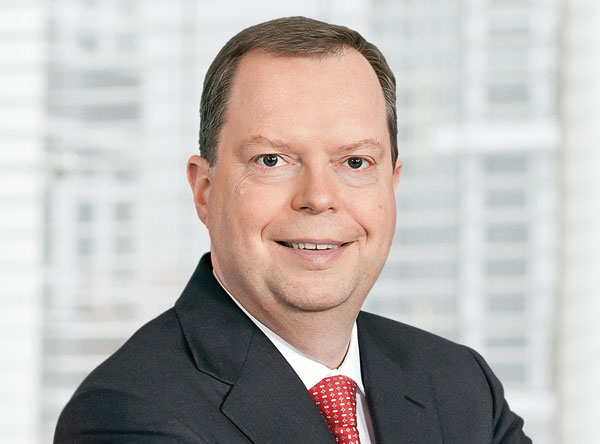 Peter Terium, CEO of RWE, says that the bigger power and utility companies “have to adjust to the fact that, in the longer term, earning capacity in conventional electricity generation will be markedly below what we’ve seen in recent years," as the shift to distributed power takes place.
Photo courtesy of RWE
Economic and cultural theorist Jeremy Rifkin published his seminal work "Entropy" 35 years ago. His ideas about the future, however, are not winding down at all.

In late March he delivered a keynote address at Germany’s “Energy Transition Dialogue” summit hosted by German Vice Chancellor and Economic Minister Sigmar Gabriel and Foreign Minister Frank-Walter Steinmeier and attended by government ministers and officials from 61 nations. He argues that Germany’s historic transition to zero marginal cost renewable energy signals the dawn of the Third Industrial Revolution and a sustainable post-carbon economy. He envisions a worldwide Internet of Things infrastructure that will allow families, communities, and businesses to generate their own renewable energy and share their green electricity with others across a digital global Energy Internet.

His remarks were taken from his recent report “The German Energy Transition: The Internet of Things, Zero Marginal Cost Renewable Energy, and the Third Industrial Revolution." Here, by permission, we present an excerpt from that report.

In the expanded digital economy, German enterprises connected to the Internet of Things can use Big Data and analytics to develop algorithms that speed efficiency, increase productivity, and dramatically lower the marginal cost of producing and distributing goods and services, making German businesses more competitive in an emerging post-carbon global marketplace. (Marginal cost is the cost of producing an additional unit of a good or service, after fixed costs have been absorbed.)

The marginal cost of some goods and services in a digital Germany will even approach zero, allowing millions of prosumers connected to the Internet of Things to produce and exchange things with one another, for nearly free, in the growing Sharing Economy. Already, a digital generation is producing and sharing music, videos, news blogs, social media, free e-books, massive open online college courses, and other virtual goods at near zero marginal cost. The near zero marginal cost phenomenon brought the music industry to its knees, shook the television industry, forced newspapers and magazines out of business, and crippled the book publishing market.

While many traditional industries suffered, the zero marginal cost phenomenon also gave rise to new entrepreneurial enterprises including Google, Facebook, Twitter, and YouTube, and thousands of other Internet companies, who reaped profits by creating new applications and establishing the networks that allow the Sharing Economy to flourish.

Economists acknowledge the powerful impact near zero marginal cost has had on the information goods industries but, until recently, have argued that the productivity advances of the digital economy would not pass across the firewall from the virtual world to the brick-and-mortar economy of energy, and physical goods and services. That firewall has now been breached. The evolving Internet of Things will allow conventional businesses enterprises, as well as millions of prosumers, to make and distribute their own renewable energy, use driverless electric and fuel cell vehicles in automated car sharing services, and manufacture an increasing array of 3D-printed physical products and other goods at very low marginal cost in the market exchange economy, or at near zero marginal cost in the Sharing Economy, just as they now do with information goods.

For example, the bulk of the energy we use to heat our homes and run our appliances, power our businesses, drive our vehicles, and operate every part of the global economy will be generated at near zero marginal cost and be nearly free in the coming decades. That’s already the case for early adopters in Germany who have transformed their homes and businesses into micro-power plants to harvest renewable energy on-site. Currently, 27 percent of the electricity powering Germany comes from solar and wind renewable energies. By 2020, 35 percent of the electricity powering Germany will be generated by solar and wind energies.

The quickening pace of renewable energy deployment is due, in large part, to the plunging cost of solar and wind energy harvesting technologies. The fixed costs of solar and wind harvesting technologies have been on exponential curves for more than 20 years, not unlike the exponential curve in computing. In 1977, the cost of generating a single watt of solar electricity was $76. By 2015, the cost had plummeted to $0.36. After the fixed costs for the installation of solar and wind are paid back — often in as little as two to eight years — the marginal cost of the harvested energy is nearly free. Unlike fossil fuels and uranium for nuclear power, in which the commodity itself always costs something, the sun collected on rooftops and the wind travelling up the side of buildings are free. In some regions of Europe, solar and wind energy are already as cheap as, or cheaper than, fossil fuel or nuclear generated energy.

The impact on society of near zero marginal cost solar and wind energy is all the more pronounced when we consider the enormous potential of these energy sources. The sun beams 470 exajoules of energy to Earth every 88 minutes — equaling the amount of energy human beings use in a year. If we could grab hold of one-tenth of 1 percent of the sun’s energy that reaches Earth, it would give us six times the energy we now use across the global economy.

Like solar radiation, wind is ubiquitous and blows everywhere in the world — although its strength and frequency varies. A Stanford University study on global wind capacity concluded that if 20 percent of the world’s available wind was harvested, it would generate seven times more electricity than we currently use to run the entire global economy. The Internet of Things will enable businesses and prosumers to monitor their electricity usage in their buildings, optimize their energy efficiency, and share surplus green electricity generated on-site with others across nations and continents. 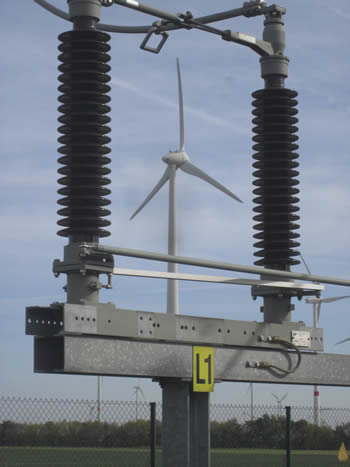 Wind turbines and distribution infrastructure near Germany's renewable energy model village of Feldheim, near Berlin, illustrate the interface between renewables and the grid that is central to Germany's energy future.
Photo by Adam Bruns

The Energy Internet is composed of five foundational pillars, all of which have to be phased in simultaneously for the system to operate efficiently.

First, the introduction of feed-in tariffs and other incentives, to encourage early adopters to transform buildings and property sites into micro-power generation facilities. The feed-in tariffs guarantee a premium price above market value for renewable energies generated locally and sent back to the electricity grid. While the cost of subsidizing the new renewable energies is passed onto rate payers by the electricity companies, placing a short term burden on businesses and homeowners, in the mid-to long-term, Germany will enjoy near zero marginal cost energy and a dramatic increase in efficiency and productivity across the economy, resulting in sustainable economic growth far into the future.

In fact, feed-in-tariffs have been so successful in scaling-up renewable energies and reducing the fixed and marginal costs of generating green electricity, that in many regions they are being phased out in a short period of time as the new energies become as cheap as, or cheaper than, fossil fuels and nuclear power. By contrast, fossil fuel-generated power continues to enjoy deep subsidies despite more than a century of market penetration.

Second, the retrofitting of buildings and other infrastructure to make them more energy efficient, and the installation of renewable energy technologies — solar, wind, etc. — to generate power for immediate use or for delivery back to the electricity grid for compensation.

Third, embedding storage technologies — hydrogen fuel cells, batteries, water pumping, etc. — at local generation sites and across the electricity grid to manage both the flow of intermittent green electricity and the stabilization of peak and base loads.

Fourth, the installation of advanced meters in every building, and the introduction of other digital technology to convert the electricity grid from servo mechanical to digital connectivity to manage multiple sources of energy flowing to the grid from local generators.

Fifth, equipping parking spaces with charging stations to allow electric and fuel cell vehicles to secure power from the Energy Internet, as well as sell power back to the electricity grid.

The phase-in and the integration of the above five pillars will transform the German electricity grid from a centralized to a distributed electricity system, and from fossil fuel and nuclear generation, to renewable energy. In the new system, every business, neighborhood, and homeowner in Germany becomes the producers of electricity, sharing their surplus with others on a smart Energy Internet.

While these traditional vertically integrated power companies proved quite successful in generating relatively cheap electricity from traditional fossil fuels and nuclear power, they have not been able to effectively compete with local electricity cooperatives whose laterally scaled operations are more adept at managing energy harnessed by thousands of small players in broad collaborative networks. Peter Terium, CEO of RWE, the German-based energy company, acknowledges the massive shift taking place in Germany from centralized to distributed power, and says that the bigger power and utility companies “have to adjust to the fact that, in the longer term, earning capacity in conventional electricity generation will be markedly below what we’ve seen in recent years.”

A growing number of electricity generating companies are coming to grips with the new reality of democratized energy and are changing their business model to accommodate the new Energy Internet. In the future, their income will increasingly rely on managing their customers’ energy use. The electricity companies will mine Big Data across each of their clients’ value chains and use analytics to create algorithms and applications to increase their aggregate energy efficiency and productivity, and reduce their marginal cost. Their clients, in turn, will share the efficiency and productivity gains back with the electricity companies in what are called “performance contracts.”

In short, power companies will profit more from managing energy use more efficiently, and selling less rather than more electricity. 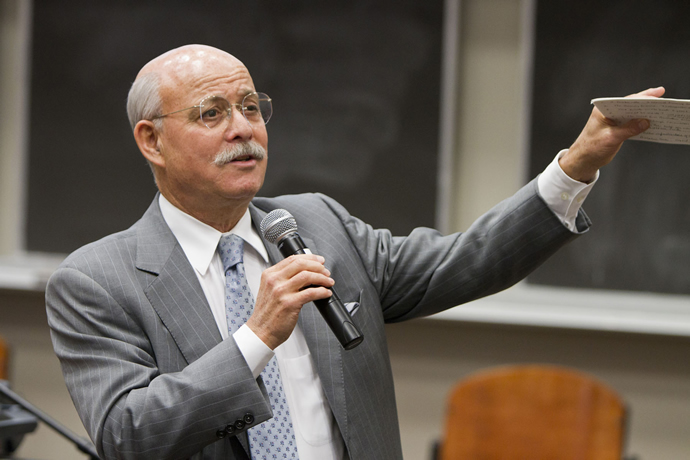 Jeremy Rifkin is the founder and president of The Foundation on Economic Trends in Bethesda, Md. The Foundation examines the economic, environmental, social and cultural impacts of new technologies introduced into the global economy. The author of "The Zero Marginal Cost Society" and "The Third Industrial Revolution," Rifkin is a senior lecturer at the Wharton School's Executive Education Program at the University of Pennsylvania, and an advisor to the European Union and to heads of state around the world.