Welspun's trail of investments in its home country is more than a well-spun tale. 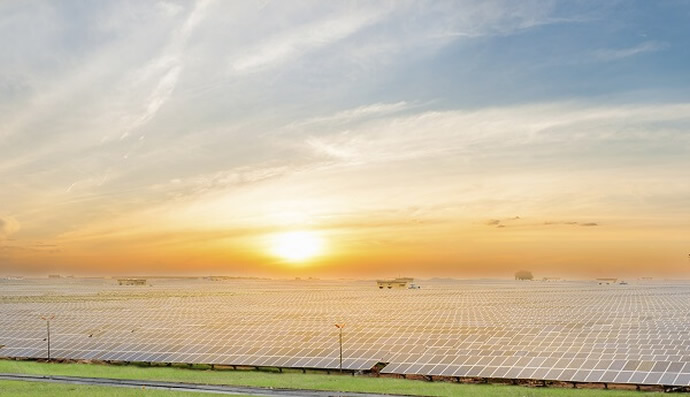 Welspun Renewables' 151-MW (DC) Neemuch solar power plant in Madhya Pradesh is one of the world’s largest. Developed eight months ahead of schedule, the project received a $24-million infusion from GE Financial Services in April 2014.
Photo courtesy of Welspun
by Adam Bruns

India's Prime Minister Narendra Modi wants to see 175 gigawatts of renewable power generation developed in his nation by 2022, with 100 GW of that total coming from solar energy.

Mumbai-based Welspun Renewables is doing its fair share to help India reach that goal, all while making sure India's people get their fair share of benefits from that growth.

The company — part of Welspun Energy, one of 17 Welspun Group companies that encompass textiles, steel, logistics and pipe manufacturing — is pursuing more than 11 GW of renewable power projects, including 8,660 MW of solar and 2,341 MW of wind across multiple states.

In late July the company commissioned Maharashtra’s first mega solar capacity under a PPP (public-private partnership) model with a 52-MW (DC) power plant., under a 25-year power purchase agreement (PPA) with Maharashtra State Power Generation Co. Ltd (Mahagenco).  Located in one of the highest radiation-receiving regions of the state, the Baramati project will generate enough green energy to power 240,000 households. 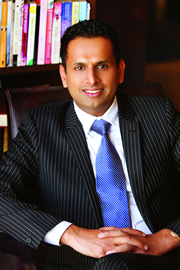 Vineet Mittal, vice chairman of Welspun Renewables, said the project "is strengthening our partnership with the state of Maharashtra and advancement of the state’s utility-scale solar industry ... While powering the state’s industries, we will also be working with our neighboring communities towards sustainable living.”

Apart from Maharashtra the company has a presence across 10 states in India. Just this week, on August 3, the company set up its first solar power project in Punjab: the 34-MW Bhatinda solar farm, developed ahead of schedule in five months on a 140-acre site.

In response to Punjab state’s growing energy demands, a cumulative 4,200-MW solar target has been announced for the state by Shri Bikram Singh Majithia, who possesses a job title equal to the scale of growth India aspires to: Honorable Cabinet Minister of Revenue, Rehabilitation and Disaster Management; Information & Public Relations and Non Conventional Energy.

The company has attracted accolades and investment in its projects from such high-profile institutions as GE Financial Services and the Asian Development Bank, which last June made its largest direct-equity investment in the renewable energy sector with a $50-million commitment.

"Our recent achievements herald the beginning of our projects springing up across India," says the company. "Located in high solar irradiation and wind velocity sites, our power plants are spread across Gujarat, Rajasthan, Madhya Pradesh, Maharashtra, Karnataka, Punjab, Tamil Nadu and Andhra Pradesh. Our 151-MW (DC) Neemuch solar power plant is one of the world’s largest and was developed eight months ahead of schedule. Our 55-MW (DC) Phalodi solar capacity is one of India’s largest and is counted among the highest generating plants in the country. The recently commissioned 19-MW (DC) Chitradurga plant is Karnataka’s largest solar project."

The wind is glowing Welspun's way too, including the 126-MW Pratapgarh wind project in Rajasthan.

The larger Welspun conglomerate is not bashful about building things to scale, or about creating entire landscapes.

Exhibit A is Welspun City, a 2,500-acre (1,012-hectare) township set up in 2004 in the heart of Anjar that the company calls its "backbone." Located near the ports of Kandla and Mudra on India's western coast, the township's operations include a line pipe mill, plate and coil manufacturing and a textile mill that in December 2014 celebrated a $404-million expansion with a new spinning plant that — surprise — is the largest under one roof in India. "The expansion project reflects the ethos of the Government of Gujarat’s recent ‘Farm-Factory-Fabric-Fashion-Foreign’ Textile Policy, which is aimed at strengthening the entire textile value-chain," said the company.

At the same time its projects' scale keeps growing, the company, led by serial entrepreneur Mittal, has earned high praise for its large-scale commitment to the triple bottom line, extending a hand to underserved communities in area of education, empowerment and environment & health.

Sustainable development aspects of the Welspun City, for example, include a 500,000-tree forest that features the jatropha tree, valuable for biodiesel, and schools.

Welspun makes no small plans, as its 2,500-acre township in Anjar attests.
Photo courtesy of Welspun

"Recognizing that India is at cross roads of development, we have nurtured a socially inclusive development dream," says the Welspun Renewables corporate profile. "Our efforts are concentrated towards ensuring sustainability of the power-planet-people nexus."

The company's social inclusion work is not theoretical and hardly lip service: To help get students off the literal ground in village classrooms, it led an effort to use the pallets in which its solar products were shipped to build tables and chairs, even as those products themselves are installed on schools' rooftops to power lights and fans. Its programs to empower women — including stitching and tailoring training centers and the Kshirsagar Dairy — have helped families develop income streams where none existed previously. And the company has set up medical centers and clean water plants to serve villagers' needs.

"Social inclusion comes quite naturally for us," says the company. "It’s not an option but a top priority."

Two statistics illustrate the challenge and opportunity: First, 540 million of India's 1.2 billion people do not have an electricity connection. Welspun's efforts in bringing the cost of solar to grid parity will help.

The second statistic beckons to an even greater opportunity, and not just for Welspun: India's total solar energy potential is estimated at 5 trillion terawatts, one of the highest in the world. 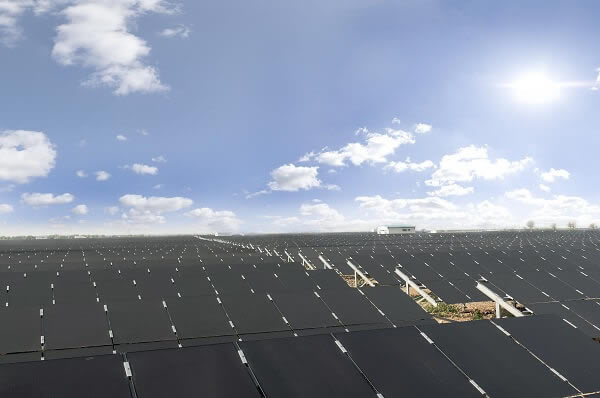 Welspun's 55-MW project near Phalodi in Rajasthan was completed in five months.
Photo courtesy of Welspun