What to do with the assets of your old power plants? Europe's Enel has some ideas, reports The Economist.

“Energy Perspectives”, a new report from Colliers International’s Energy Group, examines real estate trends in the oil, gas and petrochemical industries in eight key locations in North America. The report looks at traditional centers of energy business like Houston and Calgary, but is also uncovers interesting insights from lesser-known energy hubs such as New Jersey.

How big a role does an about-to-close nuclear power plant play in a small Upstate New York community? One as looming as its cooling towers, reports The New York Times. A new report from the Nuclear Energy Institute, meanwhile, finds that four nuclear power reactors in Texas generate $4.4 billion in economic impact, including more than 9,000 jobs.

The Breakthrough Energy Coalition, which launched November 29 in Paris as the global climate talks were getting underway, is a global group of more than 25 investors from 10 countries who will take the risks that allow early-stage energy companies to get zero-carbon energy innovation out of the lab and into the marketplace. Four days later in Paris, a complementary coalition of 18 countries and over 60 organizations launched the Global Alliance for Buildings and Construction in order to "speed up and scale up the sector’s huge potential to reduce its emissions and literally build greater climate resilience into future cities and infrastructure." Last, but not least, Ingersoll Rand, Calpine, Siemens and Johnson Controls were among the organizations taking part in Paris under the aegis of the Business Council for Sustainable Energy. Among other aspects of its 2014 Climate Commitment, Ingersoll Rand is pursuing a 35-percent reduction in the greenhouse gas footprint of the company’s office buildings, manufacturing facilities and fleet by 2020.

Lithium-ion batteries need lithium, and some of the world's richest deposits are in South America. Reuters and a local newspaper report that Tesla officials have met with government authorities in Chile to discuss a lithium venture with state copper miner Codelco.

Dr. Seuss's Whoville is alive and well: It appears that Minnesota wind energy company Sheerwind has taken the concept for the Great Big Electro-Who-Cardio-Floox and made something useful out of it. 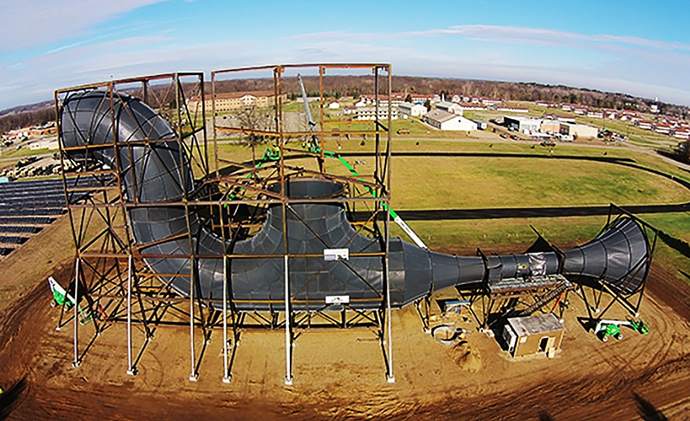 The State of Washington's Energy Facility Site Evaluation Council has released for public comment its draft environmental impact statement on the proposed Tesoro Savage Vancouver Energy Distribution crude-by-rail export terminal at the Port of Vancouver. The comment period will end on January 22.

The Project Management Institute has selected Chevron’s El Segundo Refinery Coke Drum Reliability Project in California as its 2015 Project of the Year. Fluor served as the engineering, procurement and construction management (EPCM) contractor, in addition to performing initial studies and front-end design work. The project replaced six coke drums and incorporated seismic upgrades, and was completed four months ahead of schedule, $7 million under budget, with no serious injuries and with no disruption to the plant’s operations. The project team developed an innovative logistics plan to transport the new drums to the site — reducing the distance from 22 miles to 4.5 miles to minimize inconveniences to the community. Once at the site, old drums were removed and the new 95-foot-tall drums, which are three times as heavy as the Space Shuttle Endeavor, were installed. 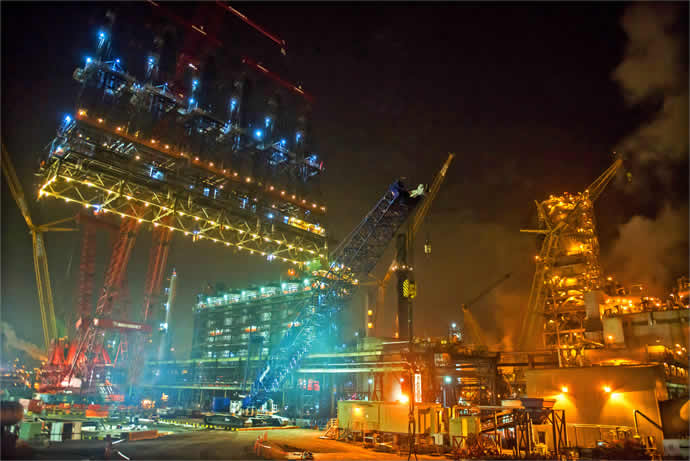 This photo shows the 1-million-pound, six-derrick structure that covered the coke drums being lifted. The removal took place in one lift with a 400-foot tall crane, the largest ever brought to Southern California.
Photo courtesy of Fluor

The World Bank in November released a status report on what aims to be the world's largest concentrated solar power plant, the 160-MW Ouarzazte Noor complex in Morocco. The $2.6-billion installation, first approved by the World Bank in 2011, is expected to provide power to 1.1 million Moroccans by 2018. The plant is one of five that comprise the country's solar plan, a $9-billion project that when complete is projected to provide 18 percent of the country's annual electricity generation. Solar power in Morocco is enabled by one of the highest rates of solar insolation of any country — about 3,000 hours per year of sunshine.

Frac sand used in the nearby Eagle Ford shale play accounted for two-thirds of nearly 10,000 railcars that moved through Port San Antonio's East Kelly Railport in Texas (pictured below) during the fiscal year ending Sept. 30. The 350-acre railpark adjacent to Union Pacific’s South San Antonio Classification Yard (with BNSF railway access) has averaged 9,791 railcars for the past three years after moving just 5,167 in FY2012. CIG Logistics and short-line operator Watco Cos. recently have made investments totaling $10 million to add silos, make warehouse improvements and extend rail spurs to facilitate storage and transload of sand and other supplies used in oil and gas extraction. 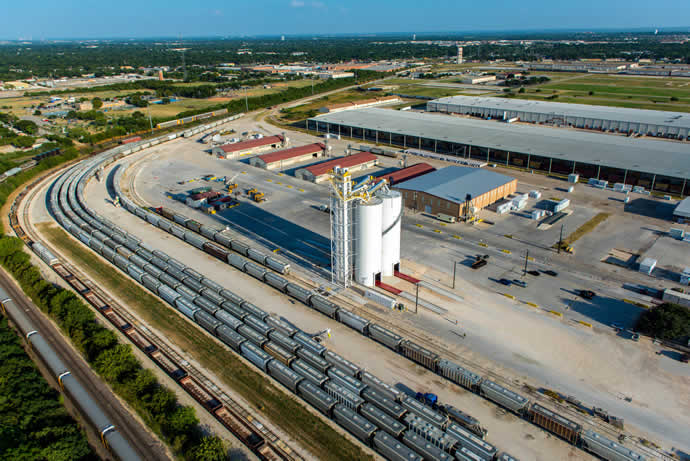