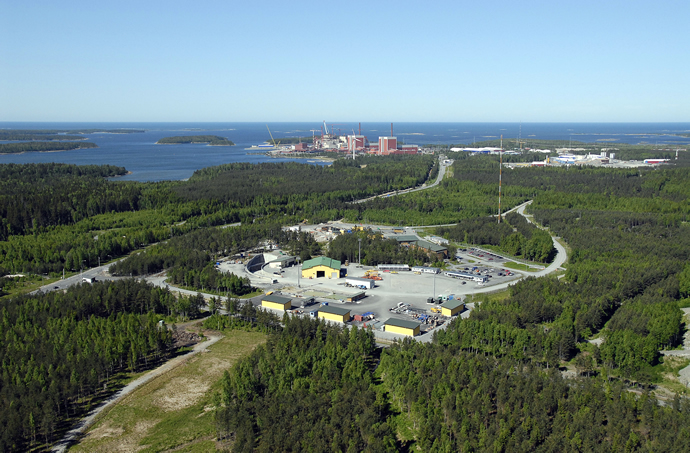 The Onkala nuclear waste disposal site in the foreground is not far from multiple nuclear reactors operated by TVO and Fortum on the island of Olkiluoto in Eurajoki, on Finland's western coast.
Image courtesy of Posiva
by Adam Bruns 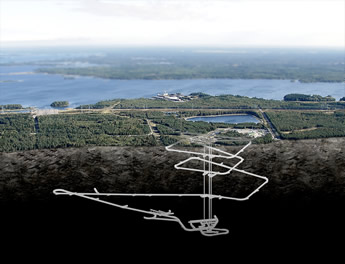 A photo-rendering conveys the position and scale of Onkala's tunnel and shaft system.
Image courtesy of Posiva

If you had to get an urgent message to someone living 90,000 years in the future, how would you do it? Would language suffice? Would images even do the trick, or might they be viewed as crude, primitive pictograms?

That's just one of the challenges facing Onkalo, the world’s first permanent nuclear waste repository, whose name translates from the Finnish into "hiding place." The €3.3-billion (US$3.6-billion) project in November received approval of its construction license from the Finnish government.

“Finland’s parliamentary decision confirms the commitment to a world leading nuclear waste management program. It also says something about the values of this Nordic state which other nuclear powered countries will now keenly observe," said Fionán O’Carroll, project manager for international operations at Saanio & Riekkola (S&R), which contributed expertise to the application. 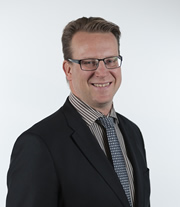 "This pioneering project is important not only for Finland, but also on a global scale. It is the first project entering into construction phase in the whole world."
— Posiva President and CEO Janne Mokka

Onkala is located on the island of Olkiluoto in Eurajoki on Finland's western coast, about 300 km. (187 miles) northwest of Helsinki, and just down the road from the nuclear power complex operated by Teollisuuden Voima Oyj (TVO) and Fortum Power and Heat Oy.

Those companies are now pursuing the construction of a third nuclear unit at that site, expected to be complete in 2018. (A planned fourth unit was canceled due to the delays experienced with the third.) More than 4,000 people from 55 different countries are working at the site.

At the Onkalo site next door, final disposal into Finnish bedrock of the spent fuel generated by the Olkiluoto and Loviisa nuclear power plants operated by those firms is planned to begin in the early 2020s. Posiva, jointly owned by TVO and Fortum, is in charge of R&D work regarding the final disposal of spent nuclear fuel, as well as the construction and operation of the encapsulation plant and disposal facility. 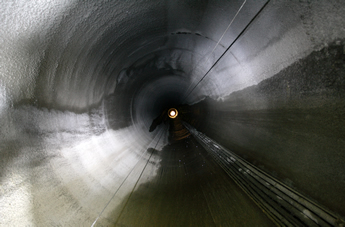 Extremely deep shafts will convey both air and personnel in and out of the Onkala site.
Image courtesy of Posiva

Putting the on-hold Yucca Mountain repository in the United States into perspective, Posiva personnel have been working on Finland's spent nuclear fuel storage solution for 40 years. The Finnish Parliament approved the decision-in-principle on the final disposal project in 2001. Posiva submitted the application for the construction license at the end of 2012. No one active on the project will see it through to its final backfilling, closure and decommissioning, which is expected to take place in the early 2120s.

But the time spans of this project go well beyond that. Nuclear waste stays dangerously radioactive or radiotoxic for 100,000 years. To keep future earthlings from stumbling on the structure and thinking they've uncovered a treasure from the past, communication must be formulated whose meaning will be understood tens of thousands of human half-lives from now.

"Scientific studies have been conducted in relation to nuclear waste storages," notes Michael Madsen, the maker of a documentary about the project titled "Into Eternity," "but the studies were ended as the US Academy of Science deemed it impossible to secure communication with any scientific certainty over a period of 100,000 years."

The canisters that will hold the nuclear waste will be sealed using friction stir welding, a technique also used on today's space exploration modules and rockets.
Image courtesy of Posiva

RSI looked at 100 cities before narrowing their choice down to Albuquerque. Miller cites cost of living and quality of life as other key factors driving the decision to select Albuquerque for RSI’s first facility outside of the Southeast.

According to Finnish legislation and regulations, the responsibility for waste management and decommissioning of nuclear power plants is with the waste generators themselves. In 1988, a fund was established for collecting nuclear waste management costs under the Nuclear Energy Act. Waste generators pay into this fund annually according to the fund target. "There is no set fee per kWh like in other countries," says S&R. "Rather, the fund is being recalculated systematically every year based on the liability of waste producers." 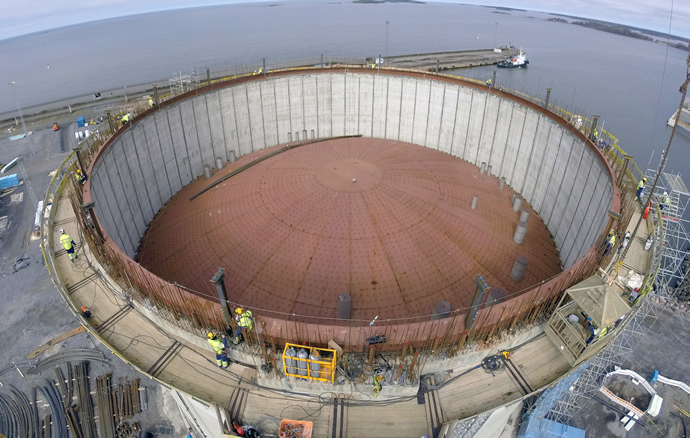 Nuclear power is not the only way Finland is reducing its carbon emissions from power generation. Skangas is building Finland’s first LNG terminal at the oil and chemical industry harbor Tahkoluoto in the Port of Pori, about 20 miles away from the Olkiluoto site. The €81-million terminal is scheduled for completion in autumn 2016, when some of that LNG will fuel a power plant in nearby Kaanaa Industrial Park.
Photo courtesy of Skangas

According to a fact sheet distributed in concert with the release of the total amount of high-level nuclear waste in the world, usually kept in water pools and casks near power plants, is between 250,000 and 300,000 tons and rising daily. Security standards around its handling and storage are guesses at best, as radiation was only first detected some 115 years ago. In Europe the security standard is 100,000 years for the minimum period the waste must be isolated from all living organisms. In the US it is 1 million years.

"The ONKALO project of creating the world's first final nuclear waste facility capable of lasting at least 100,000 years, transgresses both in construction and on a philosophical level all previous human endeavors. It represents something new."
— Michael Madsen, director of "Into Eternity," a documentary about the ONKALO nuclear waste project

S&R became involved in the early stages of the project in the 1980s, providing expertise on site selection, rock engineering, layout-design and cost estimates for the project, and in the 2000s providing the expertise in long-term safety and production of the safety case for the construction license application. 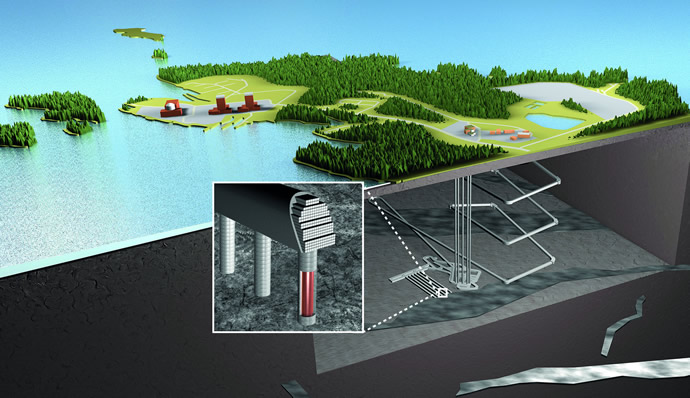 This rendering depicts the backfilling and layout of the repository, which is expected to reach the closure and decomissioning stage in the early 2120s.
Photo courtesy of Posiva