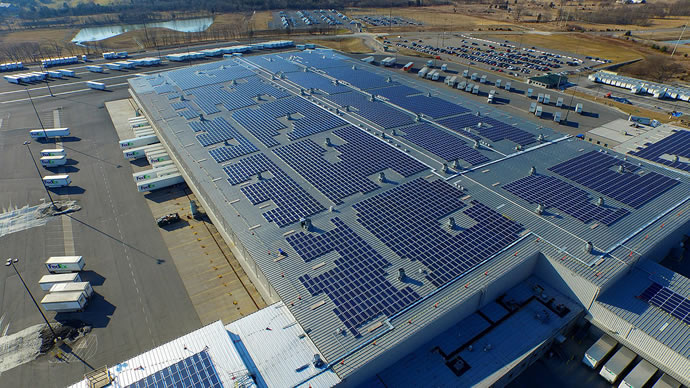 If renewable energy serves the dual corporate purposes of self-sufficient power supply and green street cred, then measuring company-wide solar installations is a strong index of whether it's worth it.

The Solar Energy Industries Association (SEIA) and its 1,000 member companies have been doing just that for the past four years. Its latest Solar Means Business report, released last week, shows a 59-percent growth in solar installations since last year's update. Walmart tops corporate solar deployers with 142 megawatts (MW) of solar photovoltaic (PV) capacity at 348 locations — up from 65 MW at 144 locations three years ago. In 2014 the company committed to doubling the number of on-site solar projects at its stores and distribution centers by 2020. 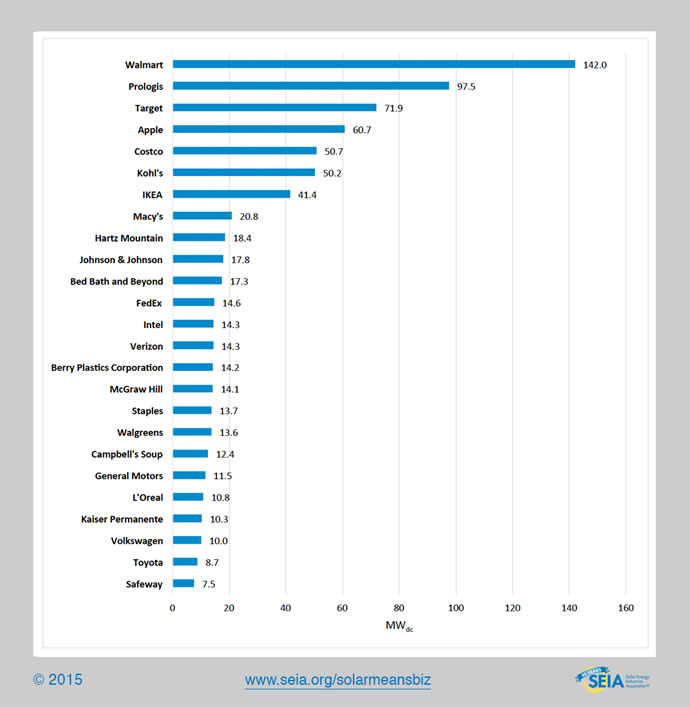 Big-box retailers pepper the list of top performers, but do not monopolize it. And therein lie some lessons for corporates thinking it's all about roof acreage. In addition to Kohl's, Macy's, Walgreens, Target, Staples and IKEA, the list of solar champions also includes Apple, Intel, General Motors, Johnson & Johnson and Toyota.

“These blue-chip companies have realized investing in solar is a common-sense, cost-effective decision that pays dividends for both the environment and their bottom lines,” said SEIA President and CEO Rhone Resch. “Not only are they helping to create thousands of American jobs in solar, the nearly 1,700 systems currently in operation are generating enough clean, reliable electricity [907 MW] to offset nearly 890,000 metric tons of harmful carbon emissions a year.” 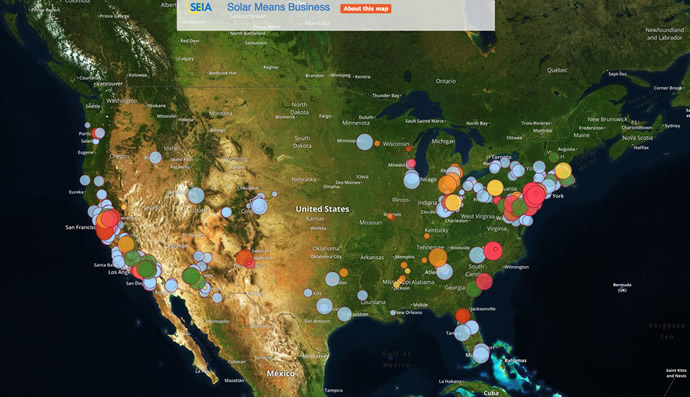 Among the tools SEIA makes available is this US corporate solar projects map.

And that's not even counting everybody. Researchers attempted to contact representatives of all Fortune 100 companies and a number of additional businesses known to have significant solar portfolios while also combing public databases to collect data. "While every effort was made to collect complete and accurate data, not every company responded to our data requests and, similarly, public databases do not capture all commercial installations," said the authors.

At the same time, this edition of the report for the first time counted installations on buildings owned by REITs and other firms even when those systems supplied power to the local utility, given that those companies are putting their buildings to use as solar power plants. "Ultimately," says the report, "SEIA believes this is an accurate portrayal of the leading commercial users of solar energy in the United States as of November 2015."

While solar panels are most common atop distribution centers and large stores, they can also be found powering data centers from Apple, Amazon and Verizon, among others, as well as headquarters and office facilities of such companies as Forever 21, L'Oreal and Mortenson Construction (which makes a good bit of its revenue in the data center niche). A total of 92 of the 1,580 systems in the report's data set are office buildings that have gone solar, with an average system size of 782 kW. A few are large-scale systems at manufacturing sites. 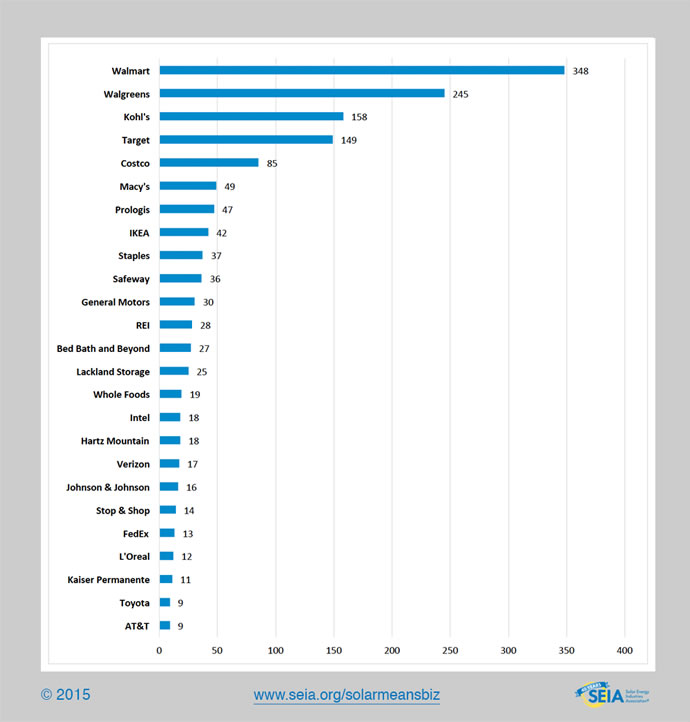 Top 25 Companies by Number of Installations

“Prioritizing renewable energy options like solar power at our facilities not only helps us reduce our spending on traditional energy but also reduces business risk and our impact on climate change,” said Rob Threlkeld, GM global manager of renewable energy.

Among the annual report's most significant findings is that companies with a crush on solar power tend to fall in love with it eventually. The top 25 companies have installed more than 1,462 individual systems.

“Solar energy is an integral part of Intel’s renewable energy portfolio, and we are committed to embracing, evaluating and implementing new projects and innovative learnings around the world,” said Marty Sedler, director of Global Utilities and Infrastructure at Intel Corporation. “Solar will continue to be a core part of our alternative energy solution because it provides leadership, helps spur the market, makes renewables more accessible, and reduces the overall carbon emissions from electricity generation directly used for our facilities.”

"Spurred by investments in solar made at the residential, commercial and utility-scale level, installed solar capacity in the U.S is 30 times greater today than it was in 2006."
—SEIA's Solar Means Business report

Those companies' decisions to deploy more solar have been aided by solar's declining costs. Moreover, says the SEIA, "growth in corporate solar adoption has not been limited to traditional solar markets in California, Arizona and New Jersey — this year’s report finds installations in states like Arkansas, Kansas and Indiana. It is increasingly apparent that solar is a smart business decision wherever your business may be." In total, the data in the report represents solar-powered businesses in 37 states, as well as Puerto Rico and the District of Columbia. IKEA flies its solar flag in 22 of those states, topping the list of most geographically diverse solar power deployers. 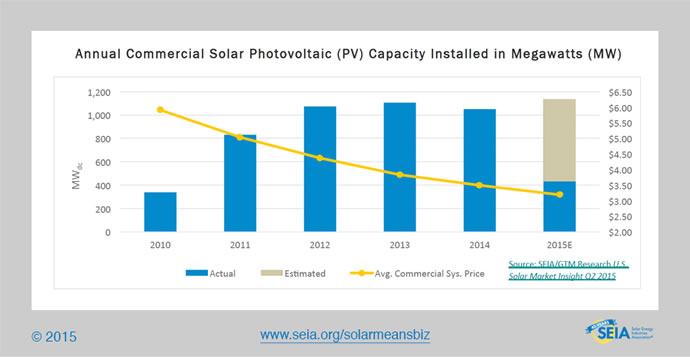 Ground-mounted systems "are typically larger installations that companies with higher levels of electricity such as GM, L’Oreal, and Verizon use to power their manufacturing and data centers," says the report, and in total represent more than 15 percent of all PV capacity within the report's data set. However, carports are the fastest-growing niche, with 42 of the 67 carport projects tallied in the report having been installed since 2012. Walmart has installed 23 of them, with others coming from Intel, Johnson & Johnson, AT&T, GM and Verizon.

With their high power needs and high dependability requirements, data centers may represent the most dramatic illustration of solar power's everyday effectiveness in the industrial and corporate arena.

"Apple is a pioneer in this area with its pair of large 20-MW plants near their data centers in North Carolina and another 20 MW that recently came online in Nevada," says the SEIA report, in addition to a plan to power its new spaceship HQ in Cupertino, Calif., with 130 MW of solar. Amazon, similarly, announced plans in June for an 80-MW plant in Virginia. "In contrast to these extremely large projects, Verizon’s needs are more dispersed as it has installed more than 7.9 MW at its data centers and mobile switching centers in New Jersey, Maryland, California, Massachusetts and Hawaii." 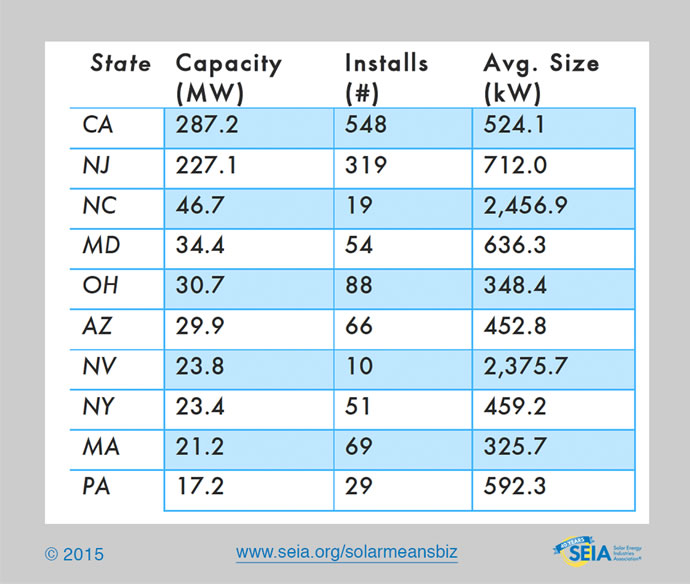 The chart above lists the cumulative solar capacity of each state based on the commercial installations covered in the SEIA report.

Amazon's new solar farm is expected to start generating approximately 170,000 megawatt-hours (MWh) of solar power annually as early as October 2016 — or the equivalent of that used by approximately 15,000 US homes in a year. Amazon Solar Farm US East, positioned in Accomack County right on the Maryland state line, will be the largest solar farm in the state of Virginia, with all energy generated delivered into the electrical grids that supply both current and future AWS Cloud data centers. Virginia Gov. Terry McAuliffe signed the permit for the installation in September.

In November 2014, AWS shared its long-term commitment to achieve 100-percent renewable energy usage for the global AWS infrastructure footprint. As of April, it was already 25 percent toward that goal, and aiming for 40 percent by the end of 2016.