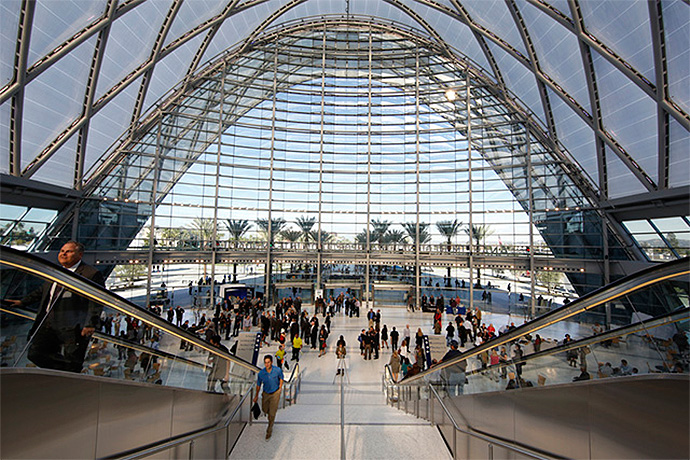 California had the highest number of LEED certifications by far in 2014, with 517. Among those in the LEED pipeline is the new Anaheim Regional Transportation Intermodal Center (ARTIC), designed by HOK, which opened in December. Projected to serve the transportation needs of more than 3 million people annually, the hub links commuter and regional rail service and intercity bus systems, and its design, aiming for LEED-Platinum, ensures that it can serve as a southern terminus for California’s future high-speed rail system.
Image courtesy of HOK
by ADAM BRUNS

LEED-Gold-certified 500 West Madison, atop the Ogilvie Transportation Center in Chicago’s Central Business District, is home to major office tenants including Citigroup Inc. and W.W. Grainger Inc. and is the headquarters for Orbitz Worldwide Inc. On behalf of owner KBS REIT III, Transwestern negotiated major leases in December in the building, now 95-percent occupied. KBS has committed significant capital in 2014 and 2015 that includes upgrades to all of the building’s public spaces, including a new lobby and atrium (bottom).
Images courtesy of Transwestern

Today the U.S. Green Building Council (USGBC) released its annual list of the Top 10 States for LEED, the world’s most widely used and recognized green building rating system, ranking states in terms of square feet of LEED space per state resident that was certified in 2014. But because of that definition, the leading US territory — with per-capita square footage more than nine times the average of No. 1 Illinois — wasn’t officially listed.

That territory, of course, is the federal district of Washington, D.C., which doesn’t get to be a state, but which leads the nation with 29.44 sq. ft. (2.7 sq. m.) of certified space per resident in 2014. Neighboring Maryland and Virginia finished third and fourth respectively, and both states increased their per capita totals to 2.7 and 2.33 sq. ft. (0.25 and 0.22 sq. m., respectively) of LEED space per resident in 2014.

“Every story about a green building is a story about people,” said Rick Fedrizzi, CEO and founding chair, USGBC, in the organization’s press release. "USGBC’s annual recognition of the Top 10 States for LEED goes beyond gross square feet or number of projects and factors in LEED’s potential in a given state to be part of the daily life of the state’s residents. This per-capita approach tells a great story about how LEED has become an important benchmark in the transformation of the nation’s built environment.”

Illinois retained its top national position for the second year in a row, with 174 LEED certifications representing 3.31 sq. ft. (0.31 sq. m.) of LEED-certified space per resident.

“Two newcomers to the list, Georgia and Arizona, show that 2014 was a year of major growth for LEED in the South and Southwest regions of the country, while the continued strong performance of Washington, D.C., Maryland and Virginia have helped the mid-Atlantic region remain the epicenter of green building across the country,” said the USGBC. “Washington, D.C., which is not included on the official list of top states due to its status as a federal territory, is notable as it continues to 2014’s list had the highest average (2.34) of per capita space certified per resident per state since 2010, and the second highest average to date.”

Six of the eight states (IL, CO, MD, VA, MA and HI) which were also on the list in 2013, increased the amount of square feet of space they certified per resident in 2014. Illinois and Colorado are the only two states to make the list every year since 2010.

*Washington, D.C. is not ranked as it is a federal district, not a state.

The USGBC’s sample of notable projects that were certified in these states in 2014 includes:

More than 26,600 projects representing 3.6 billion sq. ft. (334.4 million sq. m.) of space have been LEED-certified to date, with another 42,000 projects representing more than twice that amount of space now in the pipeline for certification. LEED v4, unveiled in the fall of 2013, includes new market sector adaptations for data centers, warehouses and distribution centers, hospitality, existing schools, existing retail and midrise residential projects. 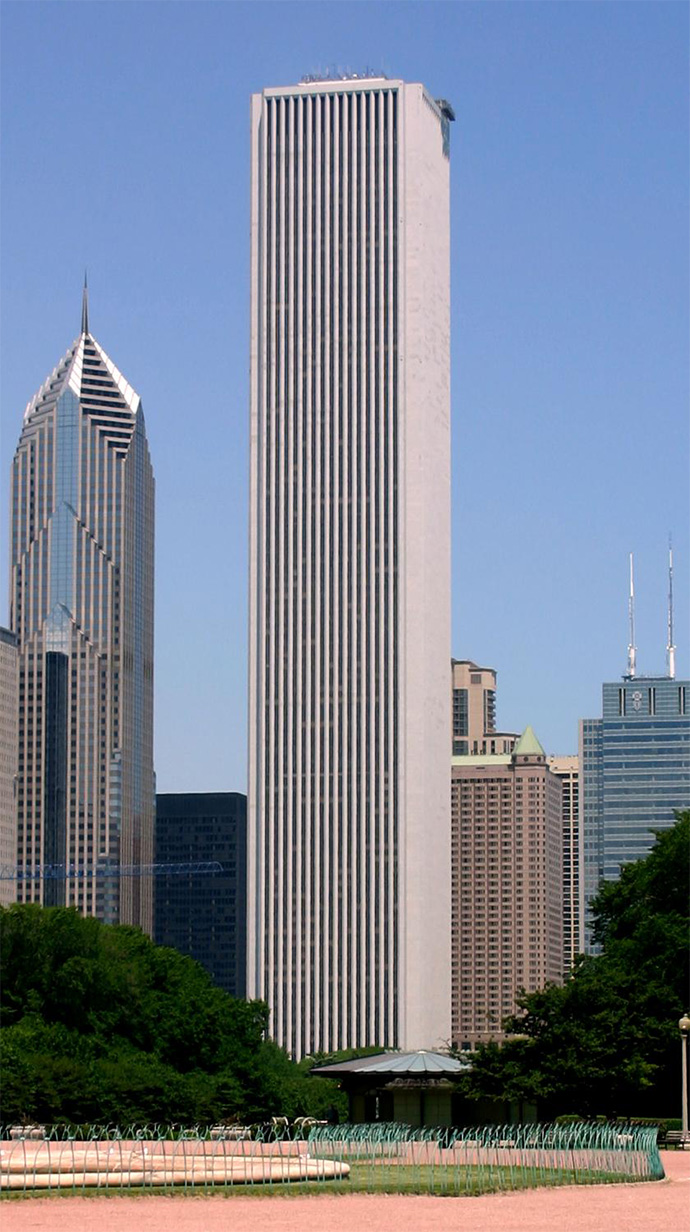 The Aon Center, a 3.2 million-sq.-ft. (297,280-sq.-m.) tower in Chicago owned by Jones Lang LaSalle, was certified LEED Silver in 2014, helping the state of Illinois achieve its No. 1 per-capita ranking for LEED-certified space. Reed Construction was selected in November to complete the build-out to the Aon Data Center, demolishing the existing data center to create a smaller data center, conference rooms and an open-office area for 36 workstations.
Photo courtesy of Reed Construction