Energy reform may be on its way in Mexico. But rooting out corruption will take a lot more than a stroke of a pen, as this Reuters investigation of Pemex contracts explains in illuminating fashion.

Beverly Hills, Calif.– based Realty Group International, Inc. announced in January its plans to expand its reach into “the upcoming boom” in natural gas-driven activity in the European country of Cyprus by developing an alliance with Antonis Loizou & Associates (ALA), which boasts more than 3,000 properties for sale. Market research indicates that investors from other European nations, China and the Middle East are the primary participants showing interest in the island nation of Cyprus, in part because its real estate investment laws allow for obtaining residency and citizenship in the European Union. "Investors who purchase property totaling €300,000 are eligible for permanent residency with visa-free travel throughout the EU; and now, through Realty Group International, Inc., this includes Americans as well," said RGI owner and CEO Michael Fiscina.

Energy booms are fueling residential rushes elsewhere too. Quebec-based ROI Land Investments Ltd. in January entered into an agreement to acquire 225 acres in the Town of Evans, Colo., adjacent to Greeley in the northeastern part of the state, in Weld County, just an hour from Denver. ROI plans to develop a subdivision with more than 760 dwelling units of various kinds, in five phases. In part because of the oil & gas boom in that area (as well as its ag products), in the last 12 months home prices have appreciated 19 percent.

The Economist has published a special report on what it calls the biggest energy innovation of all — going without it.

Several major announcements from the US Dept. of the Interior took place in the past two weeks, including the fourth competitive lease sale for potential wind energy development in federal waters off the Massachusetts shore (see graphic map below), similar lease sale activity offshore North Carolina, and approval of the SunZia Southwest Transmission Project, a major infrastructure project for the American West. 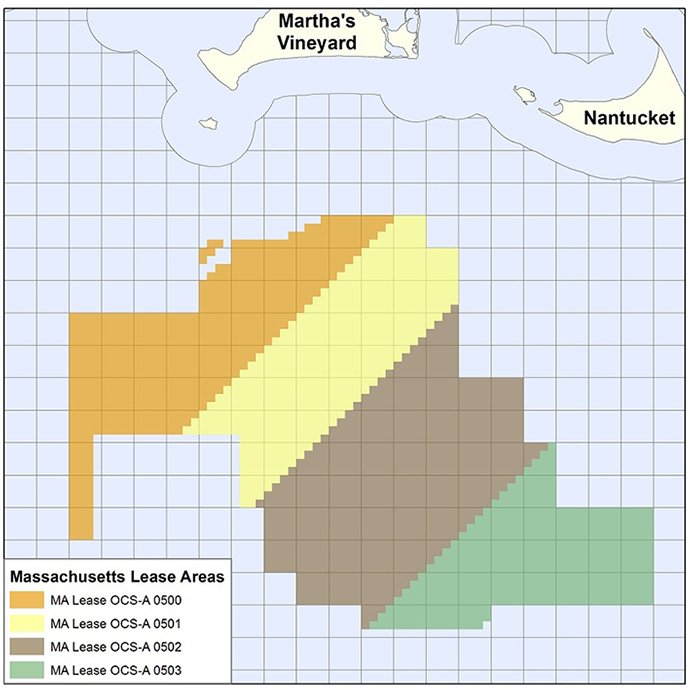 Energi, a leading provider of risk management and insurance programs for the energy industry, in January unveiled corporate expansion plans at its headquarters in Peabody, Mass. The company has leased an additional 40,000 sq. ft. in the Boston Children’s Hospital Building located at its 10 Centennial Drive. “Peabody has long been Energi’s home, and bolstering our presence here positions the company for continued success while allowing us to give back to the local community,” said Brian K. McCarthy, CEO of Energi. “As we build our team, we’re committed to upholding the same values and quality of service that have contributed to our overall success.” 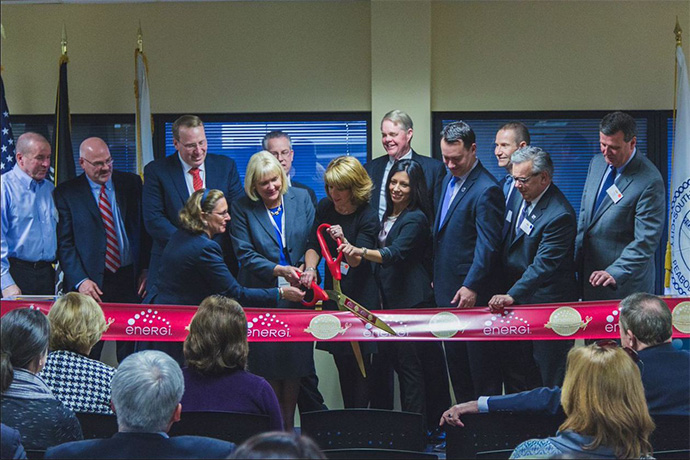 Energi celebrated its expansion with an open house and ribbon-cutting ceremony on January 22, where attendees — including Massachusetts Lieutenant Governor Karyn Polito, Peabody Mayor Ted Bettencourt and local business leaders — received guided tours of the company’s new facilities, where the company invested $1.8 million in a renovation.
Photo courtesy of Energi

In the blog Fishing for Energy Efficiency under and over the Sea, Peter Oram, Renewables Sales Leader at GE Power Conversion, discusses the great potential in both tidal energy and offshore wind industry.

The Winter 2015 issue of the Atlantic Provinces Economic Council's Atlantic Currents sees a mixed impact of lower oil prices on the economy in Atlantic Canada. "Lower oil prices will reduce the value of production, including in Newfoundland and Labrador," said APEC Senior Policy Analyst Fred Bergman. Nationally, APEC estimates there could be a $26-billion reduction in Canadian GDP in 2015 due to the lower value of oil output, with a further decline of $21 billion due to lower investment in oil extraction. “On the upside, APEC estimates that Atlantic Canada's households and businesses could see savings of $1.4 billion in 2015 due to the lower cost of gasoline and diesel fuel," said Bergman. "The drop-in oil prices have also resulted in a lower Canadian dollar, which will help Atlantic exporters."

But there are plenty of persons still working for energy firms in Alberta. In December, Alberta-based Enbridge Inc. announced its long-term Edmonton office plans, confirming tenancy agreements in the new Kelly Ramsey Tower and the existing Manulife Place. As one of the largest private-sector tenants in downtown Edmonton, Enbridge has experienced significant growth and expansion in the downtown core during the past decade, having grown from 170,000 sq. ft. to nearly 650,000 sq. ft. "Enbridge's strategy is to create a work environment where our employees can collaborate, innovate and succeed, while contributing to the exciting growth within the City of Edmonton," said Enbridge COO, Liquids Pipelines, Leon Zupan. "This move will allow us to consolidate our 2,500 workers from six buildings to the two tallest and newest buildings in Edmonton's downtown core." 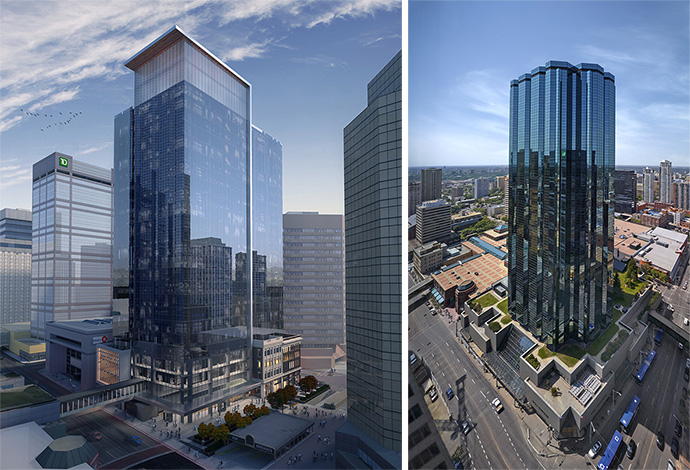 The Kelly Ramsey Tower (left) and Manulife Place are both in Enbridge’s growth plans in downtown Edmonton.
Images courtesy of Enbridge

Enbridge may be pleasing customers, but not everyone is. “As a steep decline in oil prices resulted in one of the more surprising years in recent memory for the oil and gas industry, oilfield suppliers struggled to build on past gains in customer satisfaction, according to results from EnergyPoint Research’s 2014 Oilfield Products & Services Customer Satisfaction Survey,” said EnergyPoint in January. Top marks in total customer satisfaction in 2014 go to tubular goods manufacturer Vallourec, onshore driller Helmerich & Payne, oilfield services provider Newpark Resources and offshore driller Ensco. While these and other previous industry segment leaders continued to post strong customer satisfaction scores, other suppliers appear to have lost sight of their customers to some degree.

“In many cases, progress in meeting the needs of customers in some of the most fundamentally important areas of the survey, including product and service quality, appeared to have stalled in 2014,” said Doug Sheridan, managing director of EnergyPoint Research. “As suppliers now grapple with the reality of lower demand for their offerings, providers that have continually paid close attention to customer satisfaction remain best positioned to grow market share in 2015.”