Back at the Ranch

A new town is about to pop up in southwestern Florida, and energy innovation is at its heart. 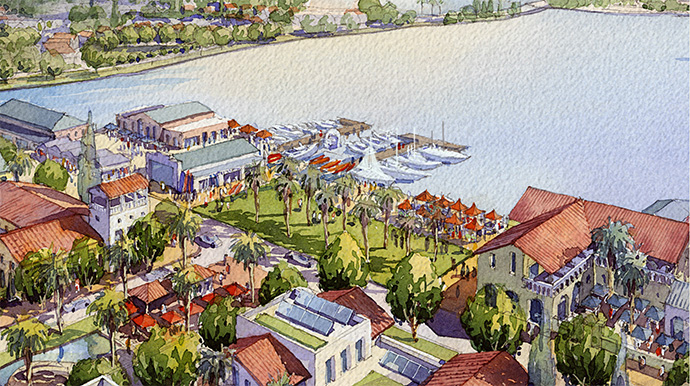 The dream that is Babcock Ranch is inching closer to reality, thanks to a new utility agreement making FPL the sole power provider.
All images courtesy of Kitson & Partners
by ADAM BRUNS

One hundred years ago, Pittsburgh-based lumberman E.V. Babcock purchased property in southwest Florida because he wanted to process its long-leaf pine. Hardwoods were exported to, among other place, Africa, to replace wooden infrastructure that was crumbling in mines. In the 1930s Crescent B Ranch turned to cattle as its main business. And 50 years ago, in 1965, a territorial agreement approved by the Florida Public Service Commission divided the Babcock Ranch property between two electric power providers: Florida Power & Light (FPL) and Lee County Electric Cooperative (LCEC).

Nine years ago, Palm Beach Gardens–based Kitson & Partners purchased the 91,000-acre Babcock Ranch, then immediately sold 73,000 acres to the State of Florida in the largest land preservation purchase in the state’s history. The remaining 18,000 acres — an area larger than Manhattan — was slated to become the town of Babcock, designed with environment and energy technology and consciousness, and “destined to be America's most walk-able, hike-able, bike-able town with neighborhoods and public resources linked together by an extensive greenway and trail system.”

Then the Great Recession struck, slowing things to a pace more befitting the wildlife than new lifestyle amenities. But even as that recession’s effects began to slacken, the 50-year-old division between the two power providers persisted, adding another layer of planning headaches to an already ambitious project.

In October, those headaches started to wane, as FPL, Babcock Ranch Community Independent Special District (ISD) and LCEC announced a settlement agreement that includes Babcock Ranch ISD and FPL entering into a franchise agreement that allows the state's largest utility to be the electric service provider for the Babcock Ranch community.

"Solar power generation and energy efficiency are lynchpins in our plan to make Babcock the world's most environmentally responsible community," said Syd Kitson, chairman and CEO of Kitson & Partners, in October. "Streamlining collection and distribution of power throughout the community utilizing FPL's advanced 'smart grid' technologies keeps us on track to achieve that goal."

"While we are proud of our rich history of reliable electricity, quality customer service and reasonable rates, we understand the benefit of receiving service from a single provider,” said LCEC CEO Dennie Hamilton. “We feel this agreement protects the interests of all stakeholders and is promising for the Babcock Ranch community and Southwest Florida as a whole."

"FPL works closely with Lee County Electric Cooperative to provide affordable and reliable electricity to Southwest Florida, and we look forward to welcoming the Babcock Ranch community to the FPL family to enjoy electric rates that are the lowest in Florida and about 25 percent below the national average," said Eric Silagy, president and CEO of FPL. "Importantly, FPL is committed to advancing solar energy in Florida, and Babcock Ranch provides a terrific backdrop, along with several other sites throughout the state, for us to develop and place in service large-scale solar facilities in the coming years."

The request with the Florida Public Service Commission to amend the service territories was approved in December, and Babcock Ranch ISD’s previously filed request to establish a new municipal electric service provider is in the process of being formally withdrawn.

Energy efficiency and solar energy generation are core components of Kitson & Partners' commitment to sustainability. Already the largest producer of solar energy in the Sunshine State, FPL is working with Babcock Ranch to develop a 75-MW solar photovoltaic (PV) facility on 400 acres to help serve the electric needs of the community. Solar panels also will grace the roofs of homes and businesses — though the Florida legislature last year cancelled the state’s solar panel rebate program.

More than half the new community’s land will be dedicated to natural greenways, parks and lakes. In the other half, 19,500 homes (ranging from workforce housing to luxury homes) and 6 million sq. ft. of retail, commercial, office and community space will provide an environment for 50,000 people to live and 20,000 people to work.

The project is fully entitled and permitted and funded entirely through an equity investment by the developer. Final engineering is in progress. In an interview, Syd Kitson says groundbreaking is finally imminent. 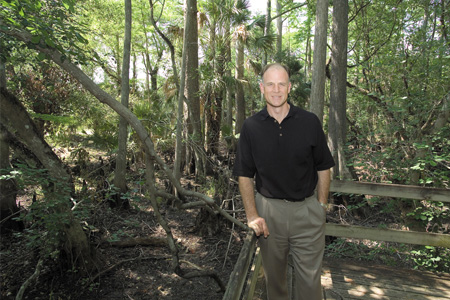 “I was a young man when I started this,” he jokes. “We hope to break ground in five to six months. Our plans will be able to be seen within the next month or so.”

Kitson says he’s asked all the time why the project hasn’t started, and he simply points to the recession: “You want to make sure there’s somebody who can buy the homes,” he says.

Kitson wants to see Babcock Ranch become a living laboratory for companies, including in the area of energy storage, which he calls “the holy grail of renewable energy.”

Being able to build a new town with no legacy issues will allow that lab approach to be applied, including the implementation of one innovation making news in other jurisdictions: driverless cars.

“We will have an autonomous vehicle system at Babcock,” says Kitson. “Suffice it to say it’s a game changer — call a car and have it pick you up and take you to your destination. You can do it in an environment that’s much more controlled.” The sustainable mobility system derives from a collaboration involving Kitson & Partners, The Earth Institute at Columbia University, and several major corporations.

“We also are going to have fiber to all the homes and businesses, and 1 gigabyte will be our standard,” says Kitson. “Doing it from the beginning with no legacy issues makes it a lot easier for us.”

That includes the building of homes with the latest smart-grid and energy-saving technology embedded from the start, which Kitson points out is a lot more manageable financially than trying to retrofit. FPL’s recent experience should be invaluable. Since 2006, FPL has invested more than $1.5 billion on grid-strengthening improvements, including installation of 4.6 million smart meters and 11,500 other intelligent devices.

As for non-residential space, Kitson says light industrial and office will be part of the mix. “There is capacity and ability to accommodate companies of just about any size,” he says.

Legacy issues won’t dog Kitson’s plans for technological innovation. But he foresees that innovation creating a lasting legacy of its own.

“It’s the largest new town coming out of the ground in the United States,” he says, and thanks in part to the new utility agreement, “we’re in a really good place.”

The hope is that others will think so too. 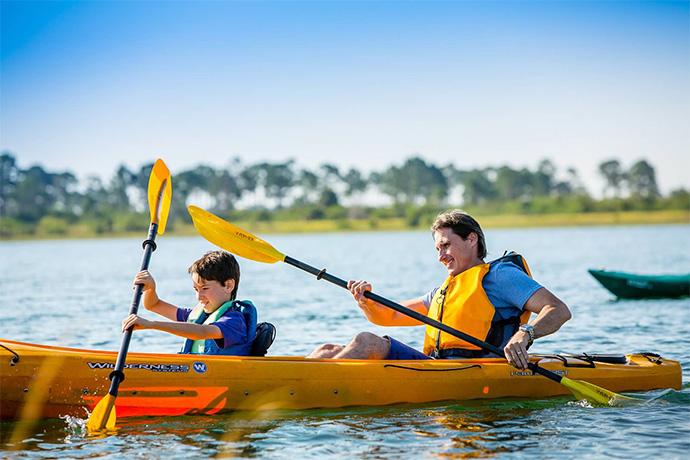 Phase I of Babcock Ranch’s development will occur near one of several lakes on the property.