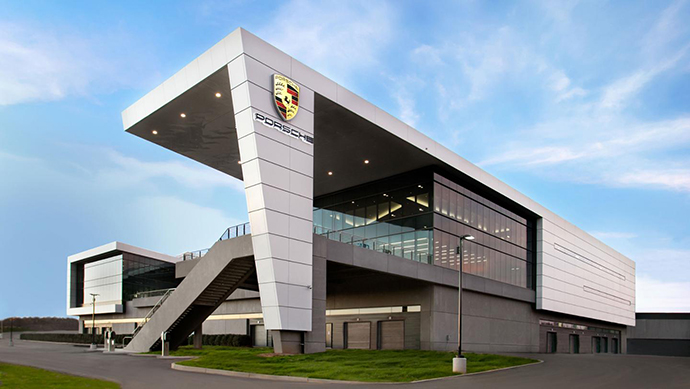 Porsche Cars North America officially opened its new $100-million Porsche Experience Center (PEC) and headquarters in Atlanta, Ga., in May. According to the EIA, almost half of all commercial buildings constructed since the year 2000 have been built in the South.
Photo courtesy of Porsche

The 2012 Commercial Buildings Energy Consumption Survey (CBECS) collected building characteristics data from more than 6,700 U.S. commercial buildings. This is a March 2015 excerpt from one of the US Energy Information Administration's full suite of reports — most of them authored by Joelle Michaels — and data sets.

On June 25, the EIA made available for public use its full set of microdata files containing untabulated records for more than 6,700 individual buildings so that data users can create custom tables. Each record corresponds to a single responding, in-scope sampled building. The sample represents an estimated 5.6 million total buildings in the United States.

Building size has outpaced the growth in the number of buildings over the past decade, according to the Commercial Buildings Energy Consumption Survey (CBECS). CBECS estimates that there were 5.6 million commercial buildings in the United States in 2012, comprising 87 billion square feet of floorspace. This level represents a 14-percent increase in the number of buildings and a 21-percent increase in floorspace since 2003, the last year for which CBECS results are available.

The size, vintage, geographic region, and principal activity of a building are among the key determinants that influence its energy use. These factors are the focus of this initial set of tables. This release is the first in a series of Detailed Tables for the 2012 CBECS, providing an in-depth look at the building stock and the attributes that drive commercial energy use. The tables provide a wealth of information about buildings, including their structure, ownership, types of energy used, HVAC and other energy-related equipment, office equipment and computers, and lighting types; these areas will be explored further in upcoming EIA reports and articles.

Between the first CBECS (conducted in 1979) and the latest 2012 CBECS, the number of commercial buildings in the United States has increased from 3.8 million to 5.6 million, and the amount of commercial floorspace has increased from 51 billion to 87 billion sq. ft.. A growing population has led to a need for more buildings, and the changing needs and wants of consumers have led to larger buildings.

Size of buildings: Although there are relatively few very large buildings (over 100,000 square feet of floorspace), they account for more than one-third of total commercial building floorspace 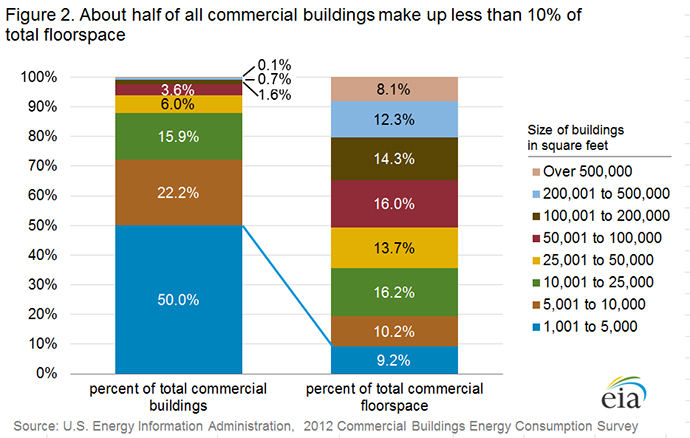 Year constructed: The commercial building stock is middle-aged, and newer buildings are larger than older ones 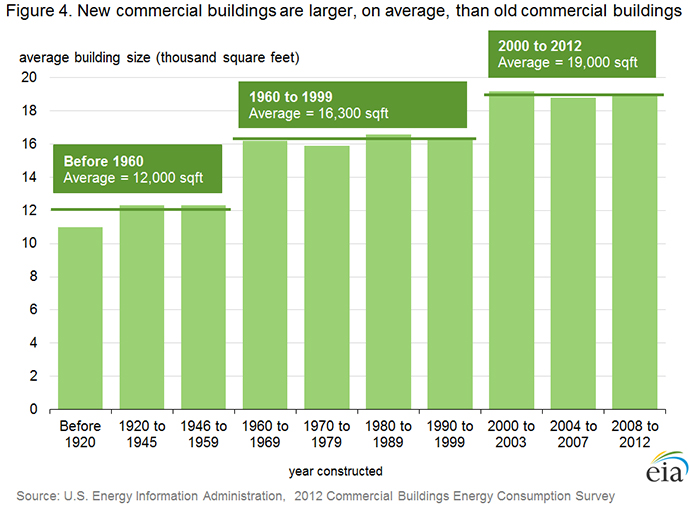 What is contributing to this increase in the size of new buildings? Function and population shift are the two apparent main drivers; a few building types have increased in average size over the years as consumers’ needs and wants have changed, and building sizes are larger in the regions that have also experienced the most growth in number of buildings, as discussed in the Census region and division section below.

Four building types showed a statistically significant increase in building size when comparing buildings constructed before 1960 to those constructed after 1999: 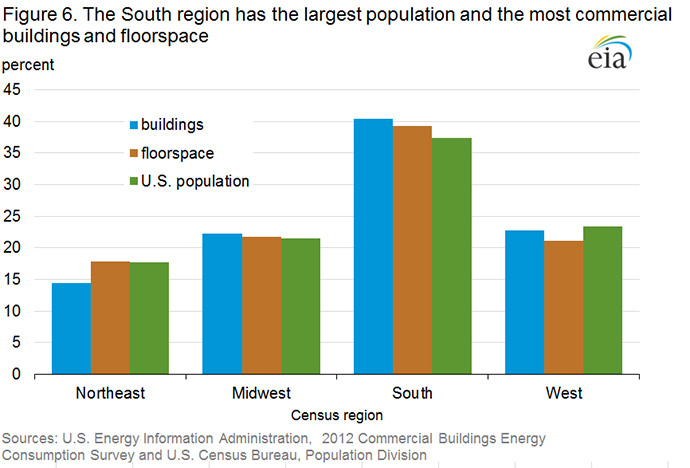 However, when comparing the regional breakout by building vintage or year constructed, the patterns vary. Older vintages are more evenly distributed across the regions, whereas in the newer buildings, the South contains a slightly disproportionate share compared to the population (the South comprises 37 percent of the population but 46 percent of new buildings). Almost half of all commercial buildings constructed since the year 2000 were built in the South. 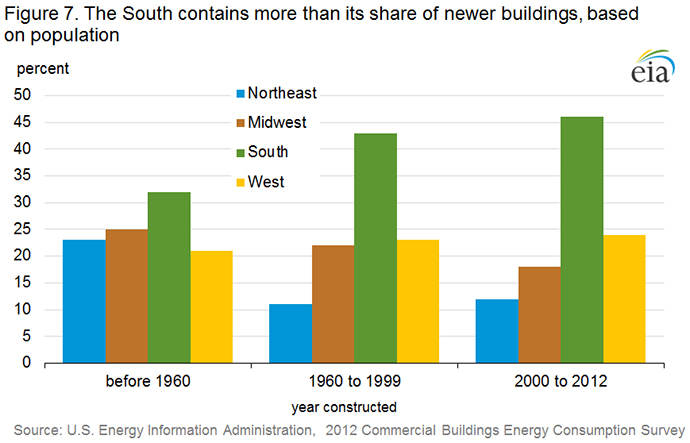 The commercial building sector is extremely diverse. The 2012 survey identified more than 100 subcategories of building activity. CBECS includes buildings as small and singular in activity as a freestanding bank or fast food restaurant, to buildings as large and complex as an office building with hundreds of tenants or a major airport terminal. CBECS also includes vacant buildings; some vacant buildings use energy, either for maintenance purposes or because a small amount of space is still used in the building. 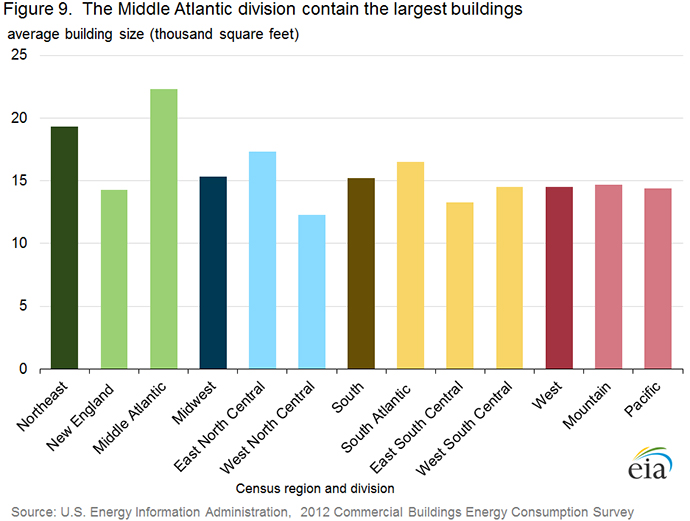 Since 2003, about half of the principal building activities have increased their numbers in the building stock. The greatest growth was in vacant buildings and other types of buildings, which include buildings such as airplane hangars, laboratories, and data centers. Warehouses, food service buildings, public assembly buildings, and office buildings also increased between 2003 and 2012, while food sales buildings (e.g., grocery and convenience stores) showed a decrease. Mercantile buildings (retail and malls) also showed a decrease , although it is not statistically significant. 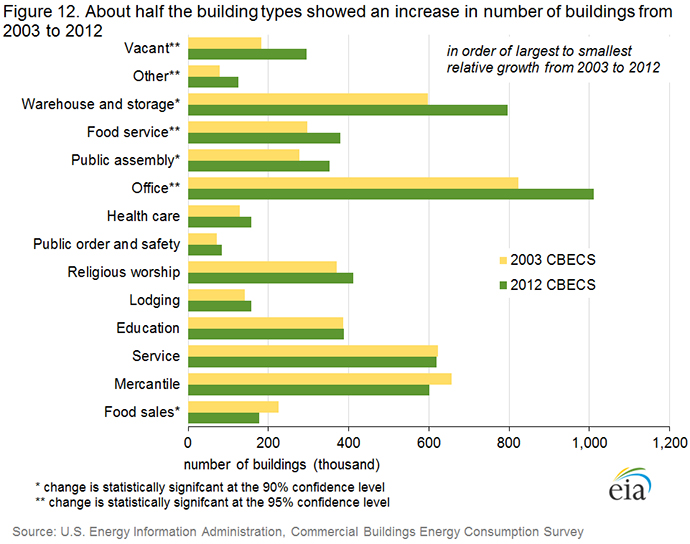