Beantown is the only city to top 80 points in newly released biannual energy efficiency rankings. 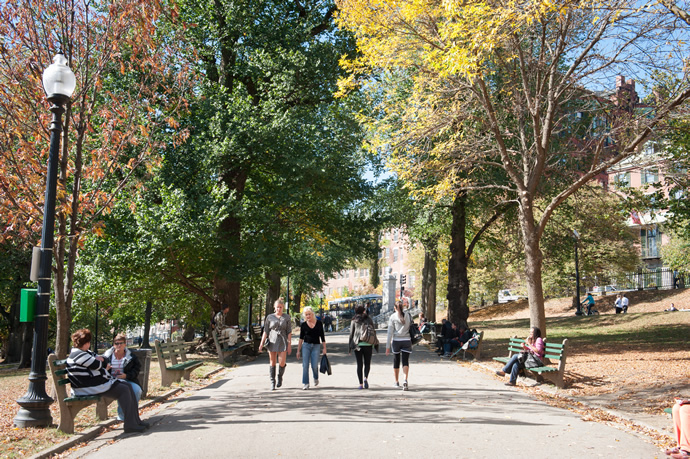 The second edition of the City Energy Efficiency Scorecard, released May 20 by the American Council for an Energy-Efficient Economy (ACEEE), named Boston the most energy-efficient city among the 51 largest cities in the United States for the second consecutive time.

The ACEEE report finds that Boston continues to be the most energy-efficient city in the nation, receiving 82 out of a possible 100 points, an improvement of more than five points from the city's 2013 score. Nine of the top 10 improved their scores from two years ago. Trailing Boston, the top 10 US cities for energy efficiency are:

Key findings include the following:

"Our findings show that cities continue to be laboratories of innovation when it comes to energy efficiency, with many pushing the envelope for more energy savings in the last few years," said ACEEE research analyst David Ribeiro, the report's lead author. "Cities are also improving their approaches when it comes to tracking and communicating their efforts to save energy. By capturing these efforts in the Scorecard we hope local leaders from cities of all sizes can learn best practices from each other and deliver the benefits of energy efficiency to their communities, such as a stronger economy and a cleaner environment."

"Our goal is to help Boston residents and businesses save energy and money, and through collaborative efforts with our utility partners, Eversource and National Grid, we are creating a thriving, healthy and innovative Boston," said Boston Mayor Martin J. Walsh. Among the city's best practices, says the report, are a Building Energy Reporting and Disclosure Ordinance requiring all large buildings to benchmark and report energy use, and the Renew Boston partnership with those local utilities, which connects residents with energy-saving services.

Though outside the top 10, Los Angeles, at No. 12, was among the most improved cities since 2013, earning 20 more points. "With the release of my Sustainable City pLAn and new bold goals for energy efficiency, transportation, and municipal operations, I am confident LA is on its way to the top of the list," said Mayor Eric Garcetti.

"The City of Atlanta and its stakeholders are fully invested in making Atlanta a top-tier city for sustainability, and our ranking in the City Energy Efficiency Scorecard recognizes our achievements," said Mayor Kasim Reed of No. 15 Atlanta. "Just recently, Atlanta became the first city in the Southeast to adopt a comprehensive energy policy that aims to significantly reduce citywide commercial energy use." 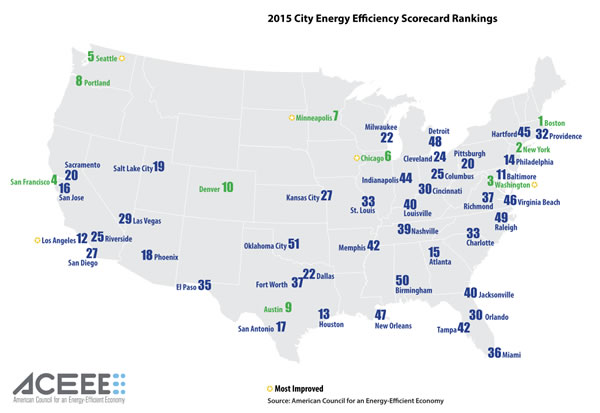 The report covered five key areas, with ACEEE providing the following highlights in each:

One of the most appealing aspects of ACEEE is its open-source attitude. First, it offers complete access to its city and state policy databases, which are free to download in their entirety. Updated at least once a year, ACEEE’s State and Local Policy Database includes comprehensive information on energy efficiency policies currently implemented at the state and local level. The database tracks policy activity across multiple sectors, including government, utilities, transportation, buildings, combined heat and power, and appliance standards.

The organization also offers its Local Energy Efficiency Self-Scoring Tool so communities can see where they stand by answering groups of questions related to the five key areas noted above.

While the city rankings only examine the nation's 51 largest cities, 10 cities have used the self-scoring tool to evaluate their own energy-efficiency profiles. Only one of those 10 — Boulder, Colo. — would place in the overall Top 10, with a score of 69.25. 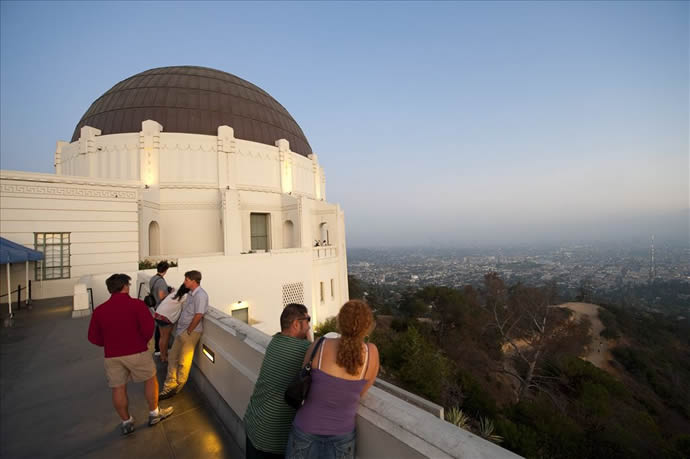 Los Angeles, seen here from an evening gathering at Griffith Observatory, is among the most improved cities in the nation when it comes to energy efficiency.
Photo courtesy of Visit California