ComEd in May announced that its power system reliability in 2014 was the company’s second best on record, second only to the company’s 2013 performance, which was the best in company history with the fewest customer interruptions. With passage of the Electric Infrastructure Modernization Act (EIMA) in 2011, ComEd embarked on a 10-year, $2.6 billion program to modernize the power system in northern Illinois. In addition to helping to avoid 1.2 million customer interruptions in 2014, EIMA work has supported 3,600 full-time equivalent (FTE) jobs in Illinois, including approximately 1,400 FTE jobs at the utility and its contractors. Since 2012, there have been more than 3.3 million avoided customer interruptions from smart switches. EIMA investments since 2012 have resulted in more than 1 million avoided customer outages and an estimated $175 million in societal savings.

“ComEd’s continued infrastructure investment aimed at modernizing and bringing innovative digital equipment to the grid is an important component to sustaining Illinois’ economic growth,” said Todd Maisch, President and CEO of the Illinois Chamber of Commerce. “We are pleased to see consecutive years of strong performance which provides business leaders the assurance that Illinois is the right place for their continued growth and investment.”

Mayo Renewable Power Limited (MRP) announced this week it has closed the financing for its 42.5-MW Power Plant and Biomass Fuel Processing Facility to be built in County Mayo, Ireland. The project, which will be fuelled by woodchip biomass, is certified as a high-efficiency, combined-heat-and-power facility with a project cost of €180 million, and qualifies for Ireland's Renewable Energy Feed-In Tariff (REFIT) program. Under REFIT, generators are guaranteed a minimum price for the electricity they sell, through December 31, 2030. Mayo Renewable Power will be seeking to source significant amounts of biomass locally in Ireland to supplement its feedstock and logistics chain from the United States.

If you think the hijinks of leathernecks are all you have to worry about in energy-boom territory, think again. Federal and state law enforcement officials from North Dakota and Montana this month announced the creation of the Bakken Organized Crime Strike Force, aimed at identifying, targeting and dismantling organized crime in the Bakken, including human trafficking, drug and weapons trafficking, and white-collar crimes.

The announcement follows the 2013 creation of Project Safe Bakken, a collaborative law enforcement program in Montana and North Dakota that joins federal, state and tribal law enforcement to battle criminal activity in the Bakken. The Bakken is a vast swatch of oil-rich land spanning approximately 200,000 square miles from North Dakota to eastern Montana and north to Canada. "It has resulted in dramatic influxes in the population as well as serious crimes, including the importation of pure methamphetamine from Mexico and multi-million dollar fraud and environmental crimes," said the US Department of Justice.

Mexico: An Opening for Energy Reform provides an overview of the Mexican energy reforms, analyzing their projected impact, their significance, and their implications for North America. The report from the Americas Society and Council of the Americas concludes that the Mexican economy will benefit through increased investment, with reduced energy costs leading to higher competitiveness. Furthermore, the reforms will provide capital towards development of shale oil and gas, as well as deepwater fields in the Gulf of Mexico. The success of this initiative will represent a major milestone as Mexico becomes a magnet for foreign investment.

Quebec-based ROI Land Investments and LNG Canada Development Inc. have entered into an agreement for ROI to develop housing in Kitimat, B.C. Of the 93 units being developed, LNG Canada will lease 35 units, which include a mix of apartments and townhouses, to house some of its employees required to support the proposed liquefied natural gas project.

"We are excited to partner with LNG Canada as it seeks to bring the liquefied natural gas industry and its economic benefits to the people and communities of the North Coast of British Columbia," said Philippe Germain, president of ROI.

"We heard very clearly from the local community how important it is that LNG Canada considers potential impacts to housing availability as a result of our proposed project," said Andy Calitz, CEO of LNG Canada.

Estimates call for the LNG Canada project to employ an average of 4,500 people during the first phase of construction, with a potential peak workforce of 7,500 people. It is expected that 300 to 400 people would be employed during first-phase operations, increasing to between 450 and 800 should the full project (four trains) be built.

On June 4, Duke Energy's retired, coal-fired Cape Fear power plant in Moncure passed into history, as its two coal units were imploded. The plant began operating in 1923. “It's been an honor to spend most of my 40-year career at the Cape Fear Plant and watch as the region has grown up around us. We've been an important part of that growth,” said Danny Wimberly, Duke Energy's manager of demolition and retirement at the site. “While it's a bittersweet day for many employees who enjoyed their years working at the site, it also demonstrates our continued progress in modernizing the way we produce energy."

The company is now focused on restoring the land, and continuing scientific and engineering studies to inform ash basin closure plans for the site’s five ash basins, part of an overall coal ash management program Duke is pursuing statewide. 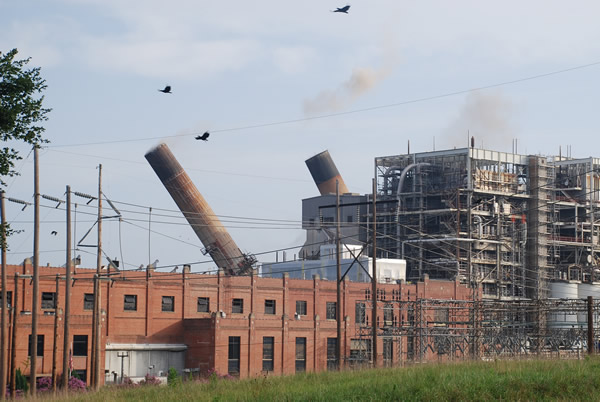 Japanese firm FOMM ("First One Mile Mobility") is seeking a local partner for its plans to establish a $10-million electric vehicle manufacturing plant in Thailand, with the goal of exporting EVs to Europe.

Institutional investments in Cemex CPO, Heidelberg Cement and First Quantum Minerals have been highlighted as being at most risk of incurring stranded carbon assets, according to ET Index’s annual carbon rankings of the world’s largest 800 companies. The rankings are designed to help investors identify their carbon risk exposure.