Shining in All Directions

It's been a busy spring for SunEdison. 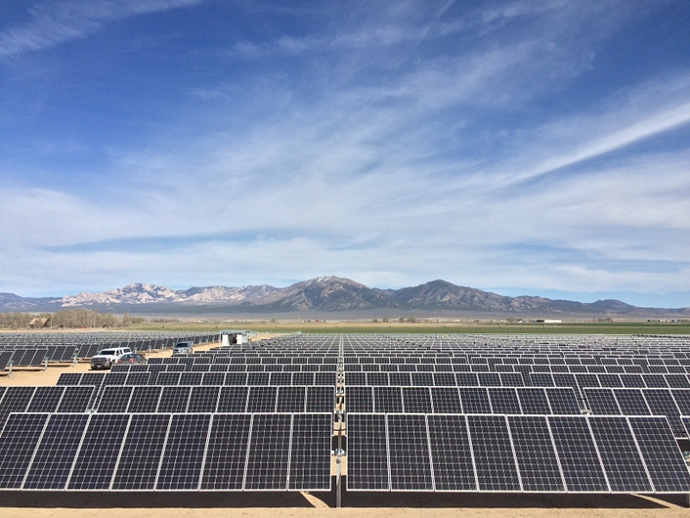 SunEdison activated this 8.22-MW solar power installation in Alamosa, Colo., in 2007, at the time the largest PV plant in the US. It's since been overshadowed by much larger projects.
Photo courtesy of SunEdison
by Adam Bruns

SunEdison calls itself the world's largest renewable energy development company. Projects the world over appear to justify that claim.

In late May the company — whose corporate HQ is in the St. Louis area where it was founded in 1959 but whose operational HQ is in the Bay Area — announced the successful completion and interconnection of the South Milford solar facility in Milford, Utah. The 3.8-megawatt (MW) DC facility is now the largest operating solar power plant in Utah. Utility PacifiCorp will purchase the electricity according to its obligation under the federal Public Utilities Regulatory Policies Act.

"We're proud to announce the completion of Utah's largest solar power plant," said SunEdison Executive Vice President of Americas and EMEA Paul Gaynor. "This is the first of many SunEdison projects to come online in Utah, and SunEdison is leading the way with more than 700 megawatts of solar projects planned for delivery over the next 18 months."

PacifiCorp will purchase the electricity via a SunEdison 20-year power purchase agreement (PPA), which enables customers to lock in low-priced electricity at long-term predictable prices. Operation and maintenance of the solar power plant will be performed by SunEdison Services, which provides global 24/7 asset management, monitoring and reporting services for all SunEdison projects.

SunEdison also was awarded contracts to build 33 MW DC of rooftop solar with Southern California Edison (SCE). The solar systems will be built on rooftops throughout the Orange County and Inland Empire industrial corridors as part of SCE's plan to upgrade and modernize the grid for customers in densely populated metro areas and reduce power interruptions during periods of peak demand. The agreements were awarded to SunEdison during SCE's fourth request for offers under the utility company's Solar Photovoltaic Program. SunEdison is the only company to win projects in all four rounds of the program.

SCE, an electric utility that serves more than 14 million residential, commercial, and industrial customers, will purchase the electricity from 17 rooftop solar systems through 20-year PPAs. Scheduled to be operational in 2016, the 17 solar power plants will generate 33 megawatts of clean, cost effective solar energy, enough to power the equivalent of 63,000 homes. The rooftop solar systems will be built on industrial properties across Orange, Riverside, San Bernardino, and Los Angeles Counties.

"With SunEdison's fixed-price power purchase agreement we will save the town around $400,000 in the first year alone."
— Winchendon, Mass., Town Manager Jim Kreidler

The company also reached an agreement to develop a 2.6-MW plant on a previously unusable landfill in Winchendon, Mass. The landfill site will be converted under Massachusetts' Solar Renewable Energy Certificates (SREC II) program, which provides preferred incentives for brown field projects.

"The state's incentive program is a real driver for innovation when it comes to land use," said Steve Raeder. "It creates the opportunity to give unusable land a new life by converting it into a site for solar energy — towns like Winchendon can convert what was once a potential liability into a revenue generating asset."

"This is a great opportunity for Winchendon to take an underutilized piece of land and turn it into a clean, reliable source of energy," said Town Manager Jim Kreidler. "We're excited to be working with SunEdison to make this project a reality, and with SunEdison's fixed-price power purchase agreement we will save the town around $400,000 in the first year alone."

SunEdison in May announced that it had signed agreements with five municipal entities on Long Island, N.Y., to build seven solar power plants totaling 14 MW DC. The electricity from these power plants will be sold to the Long Island Power Authority (LIPA), an electricity service provider for 1.1 million customers in Long Island, New York, through separate 20-year PPAs. The contracts with the Town of Southold, Town of Easthampton, Nassau County, Suffolk County and the Suffolk County Water Authority were awarded as part of the LIPA 100 MW Clean Solar Initiative Feed-in Tariff program.

"LIPA's Clean Solar Initiative program allows communities to benefit from locally generated solar energy, enabling them to better control energy costs," said Steve Raeder, managing director of Eastern USA distributed generation for SunEdison. "This program has been extremely successful and we look forward to developing more projects in Long Island. And with the new NYSERDA block incentive program and the governor's Reforming the Energy Vision plan, we can replicate our success in Long Island and bring clean, affordable solar energy to customers across the entire state of New York."

South Africa and Beyond

Five is a powerful number abroad too: Earlier this month, SunEdison was awarded an additional five solar photovoltaic projects in South Africa, totaling 371 MW DC. The award stems from the extended capacity announcement for the fourth bid round of the Renewable Energy IPP Procurement (REIPPP) Program organized by South Africa's Department of Energy (DOE), in which SunEdison previously announced that it had been awarded an 86-MW solar project. The 86-MW award represented 20 percent of the total solar allocated to preferred bidders in this round. The Droogfontein 2 solar power plant located south of Kimberly in the Northern Cape Province is expected to produce enough energy to power the equivalent of 45,000 South African homes. 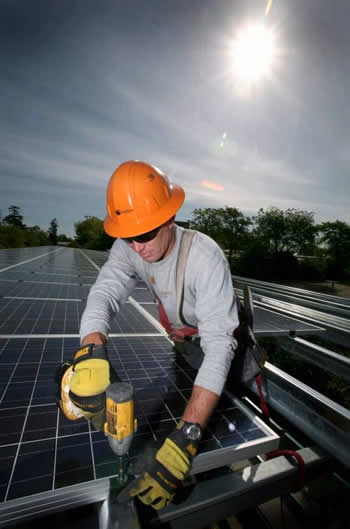 SunEdison's seven solar installations on Long Island are expected to create up to 100 jobs during construction and installation.
File photo courtesy of SunEdison

In total, SunEdison has won 457 MW across six solar power projects in South Africa's fourth round of the program. The five new solar power plants will be located in the Northern Cape and North West Provinces and are expected to produce enough energy to power the equivalent of more than 200,000 South African homes. Eskom, the South African national utility, will purchase the solar energy under a 20-year PPA.

SunEdison entered the South African market in 2011 and has developed, constructed and operates 130 MW of utility scale solar power plants.

Other SunEdison project news since mid-March has included the acquisition of seven portfolios totaling 757 MW in Brazil, China, India, Peru, India, South Africa and Uruguay; the interconnection of four solar farms in North Carolina; the completion of two plants in Ontario; 150 MW of solar in Georgetown, Texas; and plans to purchase up to 1,000 vanadium flow batteries (over 100 megawatt-hours) from Imergy Power Systems, a leader in advanced energy storage solutions. The vanadium flow batteries will be used to store solar-generated electricity for SunEdison's rural electrification and solar powered minigrid projects in India.

In all, SunEdison has a global portfolio of more than 1,000 operational sites, with over 4 gigawatts of projects in the pipeline.