by Adam Bruns
by ADAM Bruns

After the accident involving a tanker car derailing in West Virginia, many rightly wonder just where those oil-filled cars travel, and where accidents have happened in the past. ProPublica provides an answer.

The conservative yet "non-partisan" National Center for Public Policy Research urged Apple's investors at this week's annual shareholder meeting to vote in favor of its proposal that calls on Apple's board to "increase transparency regarding risks posed, if any, by the company's extensive alternative energy projects." The complete resolution, and Apple's response to it, can be found on pages 62 and 63 of the company's proxy statement, available for download here.

Why don't other parts of the world with shale resources, such as Europe, have a shale boom going on? Foreign Policy explains.

Why don't other parts of the world with shale resources, such as Europe, have a shale boom going on? Foreign Policy explains. 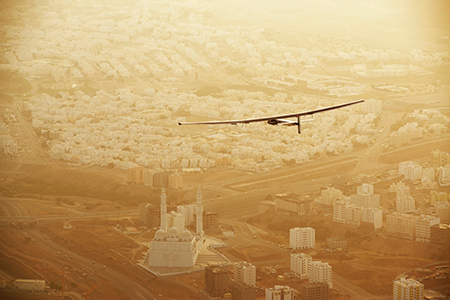 Solar Impulse 2 flies over Muscat, Oman, on its way to India on March 10, as it begins a five-month journey around the world.
Photo courtesy of Solar Impulse

On March 9 Swiss explorers Bertrand Piccard and André Borschberg launched their attempt at flying around the world in a solar-powered airplane. Their experimental aircraft, Solar Impulse 2, took off that morning from Abu Dhabi, headed for Muscat (Oman), before crossing the Arabian Sea to Ahmedabad (India) on March 10.

Capable of flying over oceans for several days and nights in a row, Solar Impulse will travel 35,000 kilometers around the world in 25 days over the course of roughly 5 months. Si2 will pass over the Arabian Sea, India, Myanmar, China and the Pacific Ocean. After crossing the Atlantic Ocean, the final legs include a stop-over in Southern Europe or North Africa before completing the Round-The-World flight at its final destination in Abu Dhabi, Solar Impulse’s official host city. During the 12 scheduled stops, the Solar Impulse team and its partners will organize public events for governments, schools and universities.

The Trans-Atlantic Business Council (TABC) in late February announced it supports the plans outlined by the European Commission for an EU Energy Union, which offers a holistic approach to EU Energy and Climate Policy.

"We support the overall objective of the Energy Union to ensure the completion of the internal energy market; a clear and long-term legislative framework, with limited regulatory barriers; and the proper integration of renewable energy sources into the market," said the TABC. "A revised EU Emissions Trading System (ETS)should also comprise part of the equation as the best market-based available solution to effectively lower carbon emissions and meet EU climate goals. Furthermore, the EU should continue to diversify its energy mix by improving domestic interconnections and strengthening relations with external suppliers, while at the same time encouraging the use of domestic conventional and unconventional resources that better respond to European energy needs."

The design and construction of the PennEast Pipeline will generate approximately $1.6 billion in additional wages, revenues and investments for regional and state economies of Pennsylvania and New Jersey, according to a new Drexel University and Econsult Solutions, Inc. joint study.

According to researchers, design and construction of the PennEast Pipeline would support approximately 12,160 jobs and an associated $740 million in wages. Additionally, the ongoing operation of the pipeline would generate approximately $23 million in annual economic impact, supporting 98 jobs with $8.3 million in wages. Even greater economic impact from ongoing operations would be realized from the new supply of natural gas to PennEast customers in the Pennsylvania and New Jersey markets.

Consumers Energy presented a $25,000 contribution this week (photo below) to officials with the Great Lakes Ag-Tech Business Incubator at the Ottawa County administrative offices in Michigan this week. The incubator specializes in helping farmers and agriculture-related entrepreneurs turn their machine, equipment or software ideas and inventions into profit-generating assets or new businesses. Consumers Energy, Michigan’s largest utility, is the principal subsidiary of CMS Energy, providing natural gas and electricity to 6.6 million of the state’s 10 million residents in all 68 Lower Peninsula counties.

Before the incubator's recent grand opening, among its pilot entrepreneurs was Frank VanKempen, who with his partners started a company that manufactures machines to produce on-farm ethanol. GrassRoot Energy’s (GRE) technology works by extracting ethanol molecules that attach to the water vapor that is created during the fermentation process. The incubator provided a variety of services to help the company be poised to begin selling its machines in 2015. 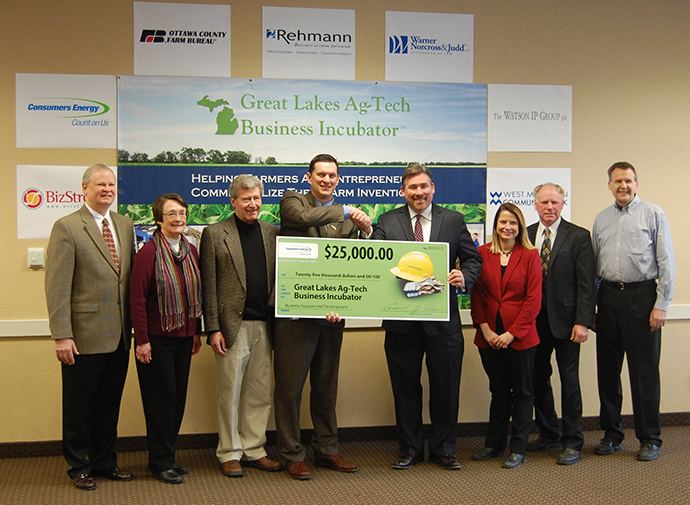 The German Federal Government and the German Renewable Energy Federation will convene a conference “Berlin Energy Transition Dialogue 2015 – towards a global Energiewende” March 26-27 at the Federal Foreign Office in Berlin. Click here for more information about the conference and registration, and click here for our past coverage of Energiewende.

On April 9-10, 2015, the US Dept. of Commerce, with the support of the U.S. Department of Energy, is organizing the second Japan-United States Decommissioning and Remediation Fukushima Recovery Forum.
The event will allow U.S. firms to hear from Japanese Ministries, utilities, and commissioning entities on the status of Fukushima recovery, to identify potential business partners while sharing experiences, expertise, and lessons learned in remediation and decommissioning, including work underway at Fukushima Dai-ichi Nuclear Power Station, and in Tohoku, the area affected by the accident at Fukushima. The event also addresses interest in cooperation in areas related to nuclear power as Japan moves forward with its plan for restarting its nuclear reactors and decommissioning some of its commercial reactor fleet.