Frugal is Thy Middle Name 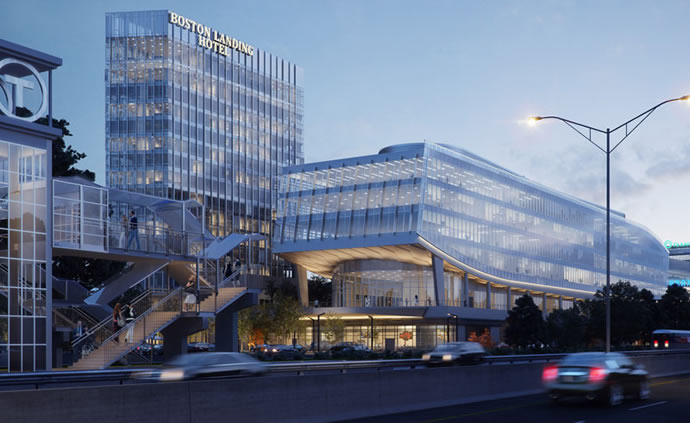 Contributing to the nation-leading energy efficiency of its home state, NB Development's $500-million Boston Landing (pictured above and in the images below) is a mixed-use development along the Massachusetts Turnpike in Boston's Brighton neighborhood. Located adjacent to the existing New Balance World Headquarters Building in an area that was once the region's largest stockyard, the site will include a new $20-million commuter rail station, 650,000 sq. ft. (60,385 sq. m.) of build-to-suit, Class A office space, and a new practice rink for the Boston Bruins.
Photo-rendering courtesy of NB Development
by Adam Bruns

"The really efficient laborer will be found not to crowd his day with work, but will saunter to his task surrounded by a wide halo of ease and leisure." — Henry David Thoreau

Aside from his ramblings in nature, Thoreau was best known for his nearly maniacal (some would say misanthropic) preoccupation with personal economy. His home state of Massachusetts continues the tradition — with more method than madness, and likely with more hard work than Thoreau's personal halo of ease required.

The Bay State, with 44 points out of a possible 50, topped the rankings for the fifth year in a row in the ninth annual State Energy Efficiency Scorecard, released Oct. 21 by the American Council for an Energy-Efficient Economy (ACEEE). But California, thanks to a number of measures, was only half a point behind, after last year finishing with 40.5 points compared to Massachusetts' 42.

"Energy efficiency is the most cost-effective, accessible way for Massachusetts to meet our clean energy goals and help ratepayers manage their energy costs," said Massachusetts Gov. Charlie Baker in an ACEEE press release. "Being recognized for the fifth consecutive year by ACEEE as the nation's leader in energy efficiency underlines the commitment Massachusetts has made to pursue a diversified energy portfolio and my administration is seeking more, renewable energy sources like hydropower to continue this important effort." 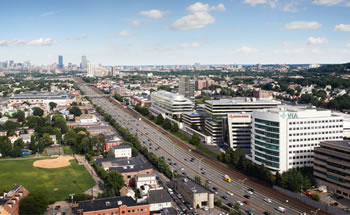 Helping California close the gap were "requirements for reductions in greenhouse gas (GHG) emissions, major efforts to achieve energy efficiency in schools, and implementation of a cap-and-trade program," said the ACEEE. "This year Governor Brown called for reducing greenhouse gas emissions by 40% below 1990 by 2030 to deal with the threat of climate change," said Clifford Rechtschaffen, senior advisor on climate, energy and environmental issues, Office of California Governor Jerry Brown. "To help achieve this ambitious goal, the governor called for doubling the rate of efficiency savings over the next 15 years — on top of the huge energy savings that California has accomplished over the past 40 years. We look forward to ACEEE tracking our progress towards achievement of that goal in upcoming State Scorecards."

California was among the most improved states, whose number also included Maryland, Illinois, Texas and the District of Columbia. "Maryland increased its commitment to energy efficiency in 2015 by establishing new, more aggressive energy savings targets for utilities," said the ACEEE. "Illinois is one of the first states to adopt the newest building energy codes, and has increased the amount of energy efficiency available to utilities through procurement agreements with the Illinois Power Agency. Like Illinois, Texas has been aggressive in adopting the latest building energy codes, and has also taken notable actions to ensure code compliance across the state. The District of Columbia is among the most improved for the second year in a row, due to its progress across a number of policy areas and the ramping up of DC Sustainable Energy Utility programs.

Is It Easy Being Green?

Another tool offered to communities by the EEA is MassEnergyInsight, an online mechanism enabling cities, towns and other entities to develop an energy use baseline; examine energy use by departments and fuel type; forecast energy budgets and show results of energy efficiency investments, among other actions.

As Gov. Baker suggests, hydropower is the next wave. He filed legislation in July to require utilities to solicit long-term proposals for hydropower, in order for the Commonwealth to meet the requirements of its Global Warming Solutions Act, which stipulates a 25-percent reduction in greenhouse gas emissions between 1990 and 2020. The legislation Baker filed also allows Massachusetts to purchase hydropower in concert with Rhode Island and Connecticut — which finished fourth and sixth, respectively, on this year's ACEEE scorecard. 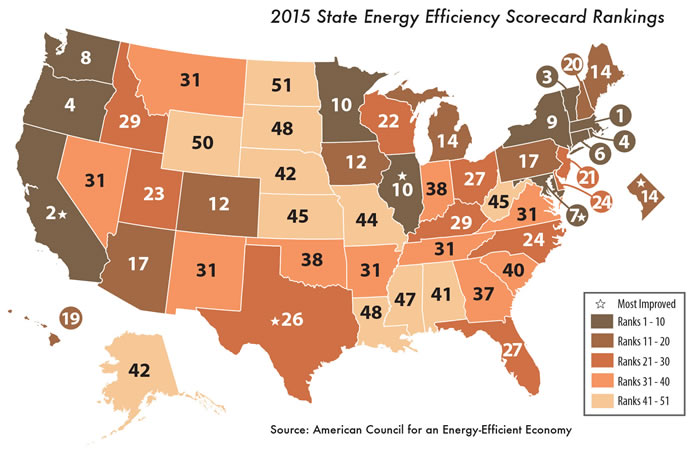 Overall, 16 states fell in the rankings this year. "The five states most in need of improvement (starting with dead last) are: North Dakota, Wyoming, South Dakota, Louisiana, and Mississippi, although new efficiency programs in Louisiana and Mississippi mean these states may not be in the bottom for much longer," said the ACEEE. "While not in the bottom five states, New Mexico dropped the farthest in 2015, losing four points and falling six positions from 25th to 31st in the rankings. This is due in part to the state's failure to adopt energy building codes beyond the 2009 requirements. Many of the states falling behind are not increasing energy savings year after year, and are therefore being outpaced as other states ramp up programs to meet higher savings targets." 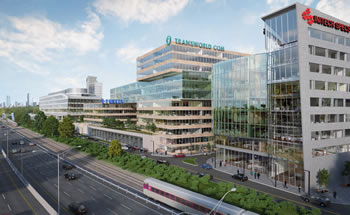 A few weeks before the scorecard's release, New Mexico Gov. Susana Martinez was already taking action, announcing a new energy strategy that would take advantage of the state's diverse energy assets and workforce. (The state had not updated its energy policy since 1991.) Energy production and exploitation (including potential export of coal) is more prominent than efficiency in the plan, save for two aspects: "reducing freshwater consumption in energy production processes" and "streamlining regulatory processes."

But it's regulation from higher up that will dictate many states' approaches.

"As states move to frame their plans under the federal Clean Power Plan, this year marks a tipping point for energy efficiency," said ACEEE executive director Steve Nadel. "State policies are increasingly encouraging utilities to invest in cost-effective efficiency, prompting them to adopt new business models that align their interests with those of customers and policymakers. We can see this taking hold in the 20 states that improved their Scorecard rank in 2015. Utilities across the United States invested more than $7 billion in energy efficiency over the past year alone."

A DOE evaluation of its own $500-million Better Buildings Neighborhood Program, designed to encourage building energy upgrades, concludes that comprehensive efficiency programs can be successful "if they overcome the reluctance of building owners and others whose participation is needed at the local level," says the Natural Resources Defense Council.

A new report from Pew Charitable Trusts, "Cleaner, Cheaper, Stronger: Industrial Efficiency in the Changing Utility Landscape," highlights the ways in which utilities, new technologies and consumer energy use trends are contributing to a more advanced, distributed grid.

"The report concludes with an evaluation of the impact of key regulatory and legislative policies on the deployment of industrial energy efficiency technologies in order to help federal policymakers effectively encourage adoption of these systems," said a Pew release. "The Pew Charitable Trusts commissioned ICF International Inc. to model these policies and found that implementation of the U.S. Environmental Protection Agency’s Clean Power Plan and an improved federal investment tax credit could result in a 27-percent increase in adoption by 2030."