If returning to the early darkness of standard time has you down, Hoboken and Buffalo will show you the light. 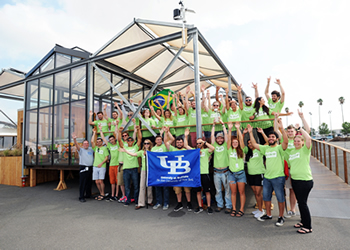 Team members from second-place overall winner University at Buffalo, The State University of New York, celebrate in front of their house. 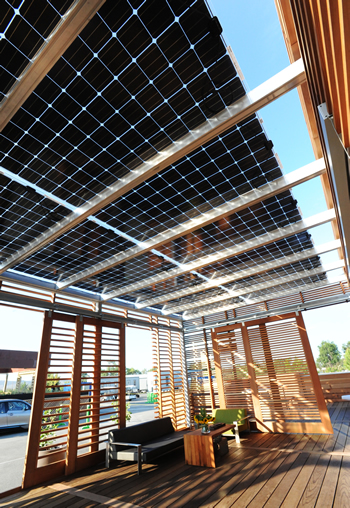 It turns out New Jersey's strong array of solar energy incentives and Buffalo's gigafactory from SolarCity aren't those two states' only assets when it comes to photovoltaics. They have bright minds too.

The results were a decidedly domestic turn from the 2013 edition of the bi-annual competition, when institutions from Vienna and the Czech Republic took first and third, respectively, with UNLV in the middle.

Stevens won by designing, building and operating the most cost-effective, energy-efficient and attractive solar-powered house, dubbed the SURE HOUSE for its resilience attributes (a recurring theme this year).s

The Stevens entry beat out 13 other teams encompassing universities in the United States, Germany, Honduras, Italy and Panama. All the teams involved institutions from either the East or West Coasts, except for two Missouri entries from the Rolla, Springfield and Joplin areas. The other 11 teams:

After working up to the competition for the past two years, the teams competed in 10 contests over nine days that gauged each house’s performance, livability and affordability. The teams performed everyday tasks including cooking, laundry and washing dishes, which tested the energy efficiency of each house. After all contest results were tallied, Stevens earned 950.685 points out of a possible 1,000 to win the competition, followed by The University at Buffalo, The State University of New York with 941.191 points, and California Polytechnic State University, San Luis Obispo with 910 points. (For final overall standings visit: http://www.solardecathlon.gov/2015/competition-scores.html. 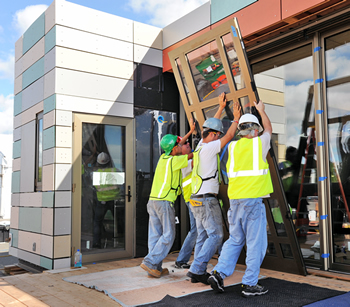 Among the 10 battles was the Engineering Contest, which Stevens won, with each house judged on excellence in innovation, system functionality, energy efficiency, system reliability, and documentation through their project manual, drawings and audiovisual presentations. Stevens also won the Market Appeal contest, "with 98 points for its SURE HOUSE for energy-conscious shore residents who are vulnerable to flooding and blackouts caused by extreme weather conditions," said a DOE release. Stevens won the Architecture and Communications contests as well.

“The Stevens design stacks up very favorably against many homes designed by seasoned architectural teams, and in fact outstrips the vast majority of U.S. houses when it comes to energy performance,” said Architecture Contest juror Ann Edminster, a leading international expert on green homes and chair of the Green Building Task Force for the Commission for Environmental Cooperation of North America.

Many Points of Light

The solar exposure for Stevens reveals an institution with a lot more going on than just solar power in terms of industry partnership and workforce development. Central to the team's success was the school's Product-Architecture Laboratory (PAL), a two-year Master's program focused on buildings that is housed in the School of Engineering and Science. That school, in the wake of Hurriane Sandy, is also becoming known for its expertise in resilience engineering. 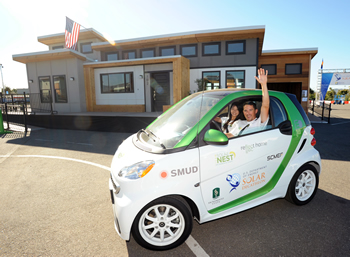 Driver Troy Anderson and passenger Minh Tran of California State University, Sacramento, wave as they maneuver their electric smart car in front of their house during the Commuting Contest.
Photo by Thomas Kelsey/U.S. Department of Energy Solar Decathlon

Among the latest developments at Stevens is a second trading and finance lab — the school's undergraduate degree in quantitative finance is a popular major and a big part of Stevens' future. Concentrations in health sciences and cybersecurity are also part of a successful mix.

But the mix of renewable energy and sustainable structures is the school's winning card today. Just this week, Stevens leaders gathered to celebrate the accomplishments of the 30-person Solar Decathlon team. In a news release, Stevens President Nariman Farvardin called the victory “one of the most exciting and rewarding experiences” of his life, while also saluting the project's chief sponsor, the PSEG Foundation. The school's involvement in the event goes back six years, led by John Nastasi, director of Stevens' Product-Architecture & Engineering program. The school's 2013 Solar Decathlon entry, Ecohabit, earned second place in architecture and fourth overall.

“We need everyone to have a SURE HOUSE," said Hoboken Mayor Dawn Zimmer, calling attention to the city's position "on the front lines of climate change." 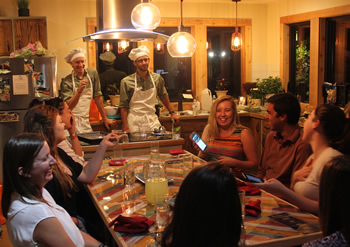 Missouri University of Science and Technology hosts decathletes from neighboring houses for a dinner party as part of the Home Life Contest.
Photo by Thomas Kelsey/U.S. Department of Energy Solar Decathlon

The Solar Decathlon's affordability contest rewarded teams that built houses with estimated costs at or below $250,000. The University of California, Davis, and Mass/Central America (Western New England University, Universidad Tecnológica de Panamá, and Universidad Tecnológica Centroamericana) took first place in the Affordability Contest and earned the full 100 points by constructing houses estimated to cost $249,312 and $120,282, respectively.

While the past two Solar Decathlons have taken place in the Orange County Great Park, that doesn't apply in perpetuity. In August the DOE announced up to $4 million in funding available to one recipient to organize, manage, and conduct the Solar Decathlon competitions in 2017 and 2019.

"The selected Program Administrator will be responsible for identifying and providing the location and venue for the Solar Decathlon competition, soliciting sponsorships, hosting the competitions, awarding $2 million in prize money to the competitors, and promoting the Department’s mission and goals through educational programs and outreach," said the DOE. It's the first time the prize money will be awarded. October 29 was the application deadline for both the administrator role and for the 2017 competition. 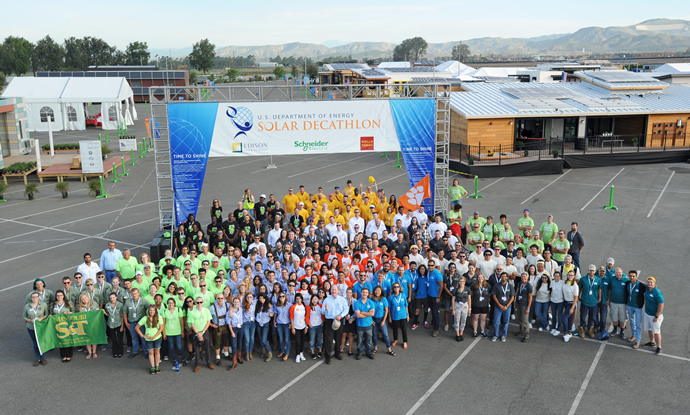 A total of 14 teams encompassing universities from five countries competed in the Solar Decathlon.
Photo by Thomas Kelsey/U.S. Department of Energy Solar Decathlon