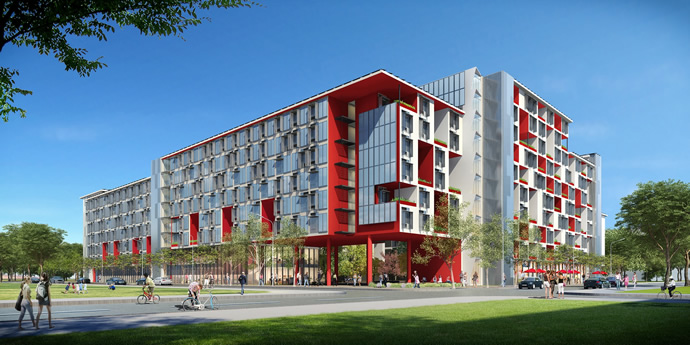 Californians and their governments are always pushing the envelope when it comes to the environment. Sometimes that pushes business away. And sometimes it pulls everyone together in novel ways.

A cascade of energy news in October illustrates some of these pioneering developments.

The Irvine Co., based in Newport Beach and San Francisco, announced its plan to become the world's first major real estate company to create a fleet of hybrid-electric buildings powered by state-of-the-art energy storage systems from Tesla Energy, after signing an MOU with San Francisco-based Advanced Microgrid Solutions (AMS).

"Large battery systems at each building in the company's coastal California portfolio will be charged during nonpeak hours and be used, when needed, for peak daytime use or in the event of a power failure," said the company. Stored energy initiatives such as this one are part of Southern California Edison's (SCE's) grid modernization plan. The first phase of the project, involving up to 24 office buildings in Irvine, is expected to reduce peak demand in those buildings by 25 percent and provide SCE with up to 10 megawatts of reserve capacity, enough to supply power to 10,000 homes. The first energy storage units in Irvine are expected to be installed by the end of this year.

"As a long-term owner, the Irvine Company takes great pride in being on the cutting edge of building design, sustainability and energy efficiency," said Rich Bluth, Irvine Company's vice president of Energy Management. "Energy storage is a game-changer. It will allow building owners to participate in grid support and reduce costs while causing no disruption or discomfort to our customers, residents or guests." 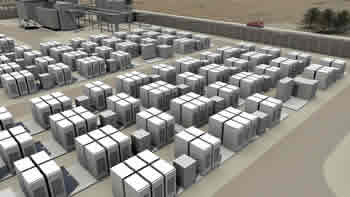 For utility-scale systems, Tesla Energy's 100kWh battery blocks are grouped to scale from 500kWh to 10MWh+. The systems are capable of 2-hour or 4-hour continuous net discharge power using grid-tied bi-directional inverters. The systems to be deployed in the Irvine Co./AMS hybrid-electric building initiative will take up about five parking spaces.
Rendering courtesy of Tesla

For the initial part of the Irvine Company project, AMS will team with renewable energy giant SunEdison to finance, install and operate Tesla Powerpack commercial battery system,s including seamlessly switching the buildings to battery power whenever SCE signals that demand on the grid is too high. AMS and SunEdison signed an agreement in July to finance and deliver 50 MW of energy storage for SCE under long-term capacity contracts. Once operational, the AMS projects are expected to be the first storage assets to be acquired by Terraform Power, Inc., a global owner and operator of clean energy power plants.

According to the agreement, the storage system contracts were awarded to AMS as part of SCE's 2013 Local Capacity Requirement solicitation, and will be built on commercial and industrial customer sites throughout the West Los Angeles Basin. "SCE will purchase capacity from the storage systems under a 10-year capacity contract, and expects to use the electricity stored in these fleets of hybrid-electric buildings in part to offset the power once produced by the decommissioned San Onofre nuclear power plant and other soon-to-be retired gas-fired plants," the companies said in July. "This program is part of SCE's plan to modernize the grid by adding 2.2 gigawatts of newer, cleaner resources including energy storage and renewables by 2022."

"This initiative creates value all the way around—for building owners, customers and utilities," said Susan Kennedy, CEO of AMS and former chief of staff to Gov. Arnold Schwarzenegger, of the Irvine Co.'s plan. "SCE is tapping into the power of their own customers' building load to manage the grid. This revolutionary partnership between a utility and its customers represents the future of the electric grid."

About 10 days after the Irvine announcement, Pacific Gas and Electric Company (PG&E) and the American Institute of Architects, California Council (AIACC) announced the winners of the fifth annual Architecture at Zero competition for zero net energy (ZNE) building design, awarding the six student and professional winners with a total of $25,000 in prizes. ZNE structures produce as much energy as they use during a year, through a combination of energy efficiency and on-site renewable energy generation.

Contestants designed a hypothetical ZNE building on University of California, San Francisco’s (UCSF) Mission Bay campus — a neighborhood seeing more than its share of recent life sciences and mixed-use investment. Winners were chosen from more than 30 entries that designed plans for multi-family housing. 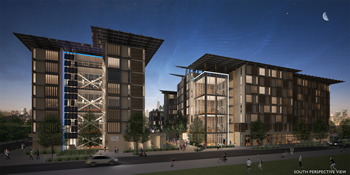 “Conspicuous Consumption” by Weber Thompson in Seattle, Wash., earned an honor award in the professional category in the Architecture at Zero competition.
Image courtesy of PG&E

“The Architecture at Zero competition demonstrates how we can push the boundaries of reducing energy waste through innovative, efficiently designed buildings. Supporting zero net energy designs is one of the many ways PG&E can lead on its commitment to help support California’s ambitious energy efficiency goals – laid out in Senate Bill 350 and Assembly Bill 802,” said Vincent Davis, senior director of Energy Efficiency at PG&E, referring to recent progressive legislation signed by Gov. Jerry Brown.

On Oct. 15, Gov. Brown and more than 40 California corporate leaders, public sector partners and industry leaders met at an event they called "Drive the Dream 2015" to announce new commitments and initiatives aimed at accelerating the continued adoption of plug-in electric vehicles (PEVs) and workplace charging. Among the state's aggressive goals is a plan to create a charging network to handle 1 million electric vehicles by 2020.

"Workplace charging is a key component to encouraging more drivers to choose electric vehicles," said Janea A. Scott, commissioner for the California Energy Commission and chairman of the Plug-In Electric Vehicle Collaborative. "The significant commitment and investment employers made today, and that we hope additional employers will make, to bring electric vehicle charging to California workplaces can help accelerate the transition to zero emission vehicles."

Among the corporate highlights: 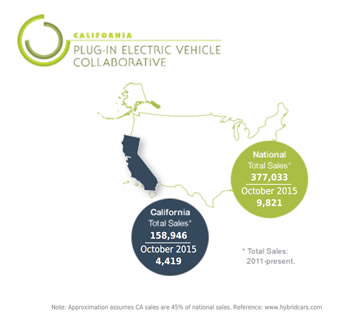 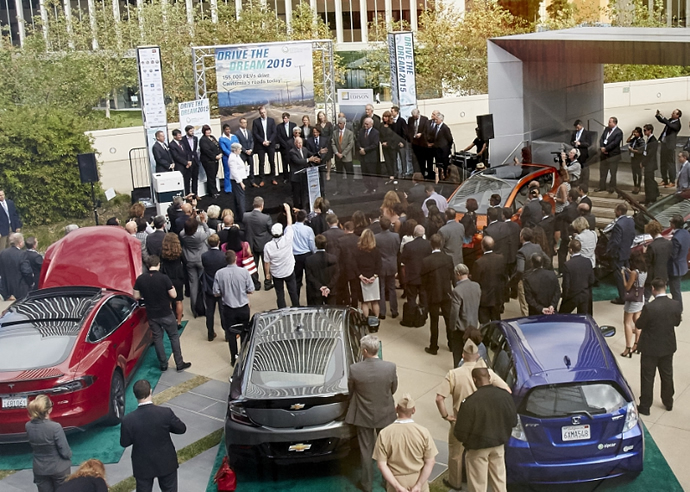