by Adam Bruns
By ADAM BRUNS

Schlumberger officials announced this week their intention to consolidate the company's US HQ in Sugar Land, Texas, just southwest of Houston, bringing more than 500 jobs and $200 million in capital improvements to the company's existing 200-acre campus there.

"As our second largest employer and consistently one of our top property tax and sales tax payers, Schlumberger has been an extremely important part of the City of Sugar Land's economy for over a half century, and we are very proud that they have chosen Sugar Land as the location for their consolidated headquarters facilities," said Mayor James Thompson.

A multi-faceted incentive package was created by the City's Office of Economic Development in partnership with the Greater Fort Bend Economic Development Council, and was approved by both the Sugar Land City Council and the Sugar Land Development Corp. According to a release from the city, "the company decided to centralize its national headquarters in Sugar Land after a comprehensive evaluation of other opportunities" with the company's national site selection and incentive advisor Duff & Phelps. Fort Bend County is expected to approve their portion of the incentive package later this month.

Oakridge Global Energy Solutions (OGES), a global leader in the development and manufacturing of solid-state battery systems and lithium technology, this week announced it will expand its operations into a larger 230,000-sq.-ft. facility in Palm Bay, Fla., and create 1,000 new jobs. "We’ve called the turning point of the ‘Made in USA’ onshoring movement pretty accurately,” said Oakridge Executive Chairman & CEO Steve Barber. “We are bringing jobs back home to America, and as a foreign player by definition, few can compete with us on the ‘Made in USA’ movement.”

It is gratifying to see this project move forward in Brevard, not only because of its scale, but also, because it brings even more diversity to our manufacturing base,” said EDC of Florida's Space Coast President and CEO Lynda Weatherman. “As we work together to elevate manufacturing as a profession, programs like the Certified Production Technician (CPT) program will enable residents to start on a path that enables them to take advantage of the opportunities companies like Oakridge are creating.”

The Florida Supreme Court last week released two opinions that begin to clear the way for an innovative energy financing solution known as property assessed clean energy ("PACE"). "The decisions are part of the Court's need to resolve four separate appeals challenging PACE programs for Leon County, Clean Energy Coastal Corridor, and the Florida Development Finance Corporation and are merely precursors to affirm the constitutionality of the PACE statute in Florida," said a release from the PACE Funding Agency. PACE programs allow property owners in participating cities and counties to add energy efficiency, renewable energy, or wind hardening improvements to their property, paid back through a voluntary special assessment.

After being directed by Gov. Jay Nixon in June 2014 to develop a statewide comprehensive energy plan with stakeholders, the Missouri Department of Economic Development’s Division of Energy has presented key recommendations of that plan. “With world-class research institutions, innovative businesses and a highly-skilled workforce, Missouri is well-positioned to build a more secure and independent energy future that will benefit families and businesses alike,” said Mike Downing, director for the Missouri Department of Economic Development. “These recommendations will provide valuable guidance for policymakers looking to grow Missouri’s energy solutions industry and spur job creation throughout our state.”

Oswald “Ike” Zeringue, a former president and COO of the Tennessee Valley Authority and a 40-year industry veteran, was honored this week in Toronto with the Nuclear Excellence Award, presented by the World Association of Nuclear Operators. WANO presents the award every two years to recognize people who have made contributions to excellence in the operation of nuclear plants or the infrastructure that supports the nuclear power industry worldwide. He most recently played an integral role in the completion of Watts Bar Unit 2.

Binswanger last week announced it was named exclusive agent by Suzlon Rotor Corp. for the sale/lease of a manufacturing/warehouse property (pictured) in Pipestone, Minn., where the wind turbine company built in 2006. Early this year, Pipestone County and the city of Pipestone sent letters to Minnesota Department of Revenue Commissioner Myron Frans expressing their disappointment that a tax payback was waived for Suzlon after the wind turbine manufacturer breached its JOBZ (Job Opportunity Benefit Zone) contract by dropping below a stipulated jobs number (23) two years ago.

For the fifth time, the European Heat Pump Association (EHPA) has awarded the Heat Pump City of the Year prize, to Calefa Oy for a project in Mäntsälä, Finland. The aim of the project — carried out by the operator of the computing centre (Yandex Finland), the district heating company (Mäntsälä Sähkö Oy) and the contractor (Calefa Oy) — is to efficiently exploit the waste heat from a computing center for district heating and to protect the environment, with 24 six-cylinder ECOLINE compressors from BITZER at the heart of the heat pump system

Currently, with a total capacity of four megawatts, the heat pumps supply about 1,500 homes with energy. Subsequently, this will rise to about 4,000 homes.

A photo-rendering of the district heating project in Mäntsälä, Finland
Photo courtesy of BITZER

Environmental engineer Kartik Chandran, a professor at Columbia University, was among the Class of 2015 MacArthur Fellows named in late September, for his work seeking to transform wastewater with the goal of producing useful resources such as fertilizers, chemicals, and energy sources, in addition to clean water, in a way that takes into account the climate, energy, and nutrient challenges we face today. 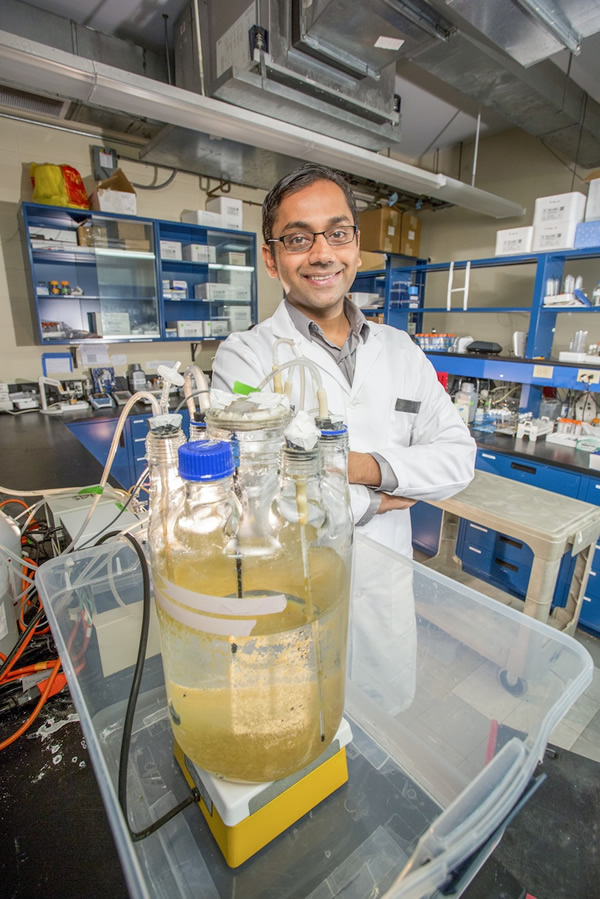