Two announcements in the past nine months confirm the German company's commitment to North Sea wind. 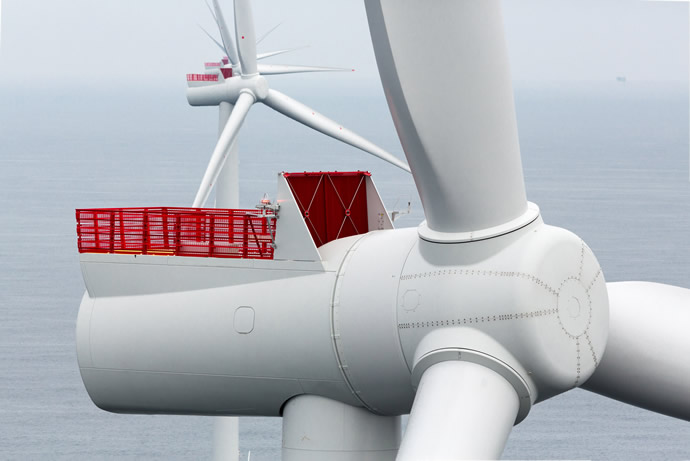 The Siemens SWT-6.0-154 with a 6-megawatt power rating has already been ordered for more than 10 offshore projects, and numerous units are already in operation. Beginning in 2017, Siemens will produce the enhanced 7-megawatt model SWT-7.0-154 in Cuxhaven.
Photo-rendering and photos below courtesy of Siemens
by ADAM BRUNS

Siemens in August announced it is investing around €200 million (US$227 million) in a wind turbine manufacturing facility in Cuxhaven, Germany. Located right on the harbor, the production complex will cover 170,000 sq. m. (1.8 million sq. ft.), and will employ up to 1,000 in the production of nacelles for the next-gen D7 wind turbine, expected to begin in mid-2017. 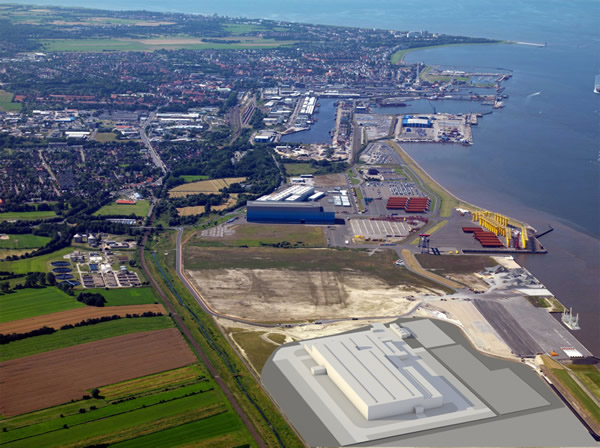 The Cuxhaven factory will have a surface area of 170,000 sq. m. (1.8 million sq. ft.) — roughly 24 soccer fields — located directly on the harbor. The first plant for offshore wind turbine components in Germany is going to start production by mid-2017 and will create up to 1,000 new jobs.

"Today is an important day for German industry, for the North Sea region and for Germany as a business region," said Joe Kaeser, president and CEO of Siemens AG, in August. "The offshore wind turbine plant we are going to build is a model for successful collaboration between politics and business ... The expansion of offshore wind power capacity in Germany and Europe represents an enormous opportunity for northern Germany and Siemens."

While evaluating the new manufacturing location, the company also intensively examined the possibilities for investing in existing locations that are being impacted by "structural transformations" — European-speak for regions whose industrial past has not yet made way to a sparkling future.

"We're looking forward to building at this factory the most efficient and reliable 'Made in Germany' wind turbines," said Markus Tacke, CEO of the Wind Power and Renewables Division. "The new factory will also make an important contribution toward helping us reach our goal of making wind power competitive."

"Siemens is bringing a fresh breeze to the coast of Lower Saxony, to Cuxhaven, an area with proven expertise in wind power," said Lower Saxony Minister of Economic Affairs Olaf Lies. "This is no coincidence. I am particularly glad to see the offshore wind industry's effect as an amplifier for the job market in northern Germany. We've always believed in the offshore wind industry, and have worked intensively to support it."

"The city of Cuxhaven will use the time before the factory opening in 2017 to enhance the qualifications of the people in our community," said Ulrich Getsch, mayor of Cuxhaven, "and to improve the infrastructure needed to create optimal conditions for the operational start of the new Siemens facility."

In addition to the new facility in Cuxhaven, Siemens is also currently constructing a plant for rotor blades in Hull, Yorkshire, UK, for six- and seven-megawatt-class wind turbines. The Hull plant, announced in November 2014, is also scheduled to be fully operational in 2017, when the city will happen to be carrying the title of European City of Culture. 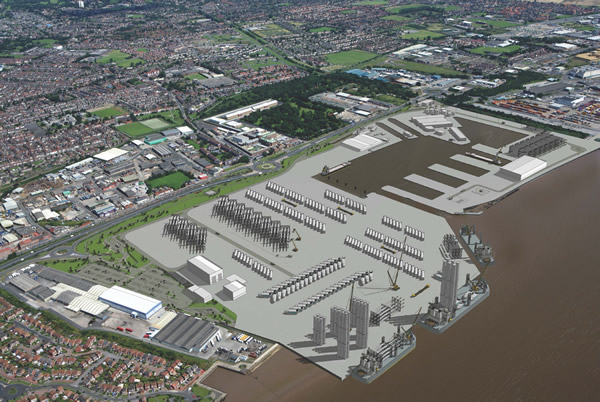 Siemens manufacturing plans will help create around 1,000 jobs — 550 at the blade factory and 450 at Green Port Hull (above).

The Hull plan, a revision of an earlier plan, will be spread across two sites comprising a previously announced Green Port Hull project construction, assembly and service facility and a new rotor blade manufacturing facility in nearby Paull, in East Riding, both locations in the UK's Humber region. Siemens is investing £160 million (US$245 million) across the two locations and its port partner Associated British Ports (ABP) is investing a further £150 million (US$230 million) in the Green Port Hull development. The combined investments will create up to 1,000 direct jobs directly.

The Green Port Hull project was in the making for around four years. Siemens characterized it as "the product of a huge team effort between many national and local political, business and community parties and many people within Siemens in the UK, Denmark and Germany, and ABP."

"This is a massive vote of confidence in our long-term economic plan," said UK Prime Minister David Cameron last November. "This investment is going to create lots of new jobs and opportunities, meaning more financial security and peace of mind for families and a more resilient economy for our country." 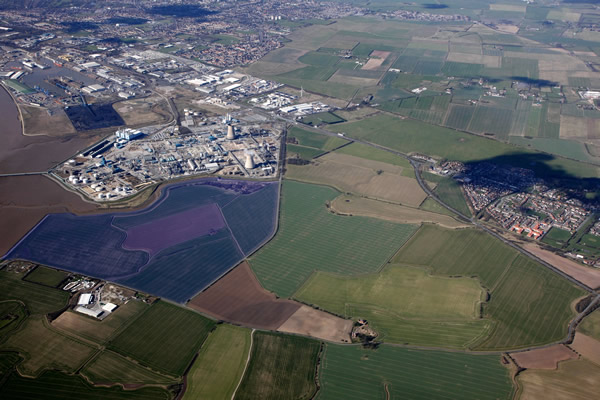 The revised plan from Siemns includes a new rotor blade manufacturing facility in Paull, in East Riding of Yorkshire.