Farmingdale, N.Y.–based industrial technology firm Cemtrex announced Sept. 1 that the company plans to venture into the emerging renewable energy sector in India to participate in a market that is expected to grow from 1,500 Megawatts in 2014 to 100,000 Megawatts in 2022. The company is in preliminary discussions with several state agencies in India who are giving incentives to independent developers for procurement of energy in a phased manner over a 25-year period. Cemtrex plans to set up a wholly owned subsidiary in India to setup and operate a 100 MW solar power plant. Indian Prime Minister Narendra Modi has targeted 175 GW of solar PV, wind, and biomass generation by 2022, and the country has earmarked around $200 billion in required investment required. "The 'Make in India' initiative of the Indian government provides a perfect incentive for us to take advantage of lucrative opportunities in this emerging market," said Cemtrex Chairman and CEO Saagar Govil.

Fluor Corp. announced today PTT Global Chemical Public Co. has selected a Fluor-led team to perform front-end engineering and design work for its proposed petrochemical complex in Belmont County, Ohio, which will encompass an ethane cracker and derivatives units by leveraging the availability of feedstock from gas taken from the Utica and Marcellus shale formations in the region to create chemical products. Front-end activities are expected to be completed in 2016.

Ever tried a MOOC? No, it's not a coffee drink or a dance move. It's an acronym for "massive, open, online course," which everybody in higher education is doing these days. On Sept. 14, the University of West England in Bristol will begin its first MOOC, "Our Green City," a six-week, completely free course that uses Bristol as a model to look at key city support systems of food, nature, transport, resources and energy, and how cities around the world are developing sustainable solutions.

TVA communities served by Huntsville Utilities, 4-County Electric Power Association, Cleveland Utilities, Columbus Light & Water, and the Knoxville Utilities Board will participate in the Extreme Energy Makeover, which focuses on energy-efficient improvements to homes at least 20-years-old and located in lower-income neighborhoods. Additionally, Glasgow (Ky.) Electric Plant Board will participate in the Smart Energy Technologies project, which works to reduce emissions by managing real-time energy demand through integrated technology. In all, TVA plans to invest more than $45 million in these projects, which are part of the Smart Communities initiative.

Israel-based Blackbird International Corp., a renewable sea wave energy technology firm, announced that its subsidiary, WERPO, has received approval for a renewable energy project from the Ceylon Electricity Board (CEB), the largest provider of electricity in Sri Lanka. The initial plant would have a capacity of 10 MW, while 10 additional plants are proposed to be set up consequently. WERPO has created a local subsidiary in Sri Lanka as a result of this approval.

WERPO's local subsidiary will sell power to CEB at 10 cents per unit," said Shmuel Ovadia, director at WERPO and inventor of its proprietary sea wave energy technology. "At this rate the company would recover its investment within four years."

The Duluth Seaway Port Authority in Minnesota in late August welcomed the arrival and discharge of the fifth of seven shipments of wind turbine components for ALLETE Clean Energy's (ACE) project in Hettinger, N.D.

ACE, a wholly-owned subsidiary of Duluth-based ALLETE, is building the 107-MWt Thunder Spirit wind farm near Hettinger, using 43 turbines. When completed later this year, the project will be sold to Montana-Dakota Utilities, a division of MDU Resources Group. ACE operates wind generation facilities in Minnesota, Iowa, Oregon and Pennsylvania. “This is the first project our company has developed and built from the ground up, and we are pleased to be located in close proximity to where this new high-tech equipment will be unloaded,” said Eric Norberg, president of ACE, which is headquartered in downtown Duluth. 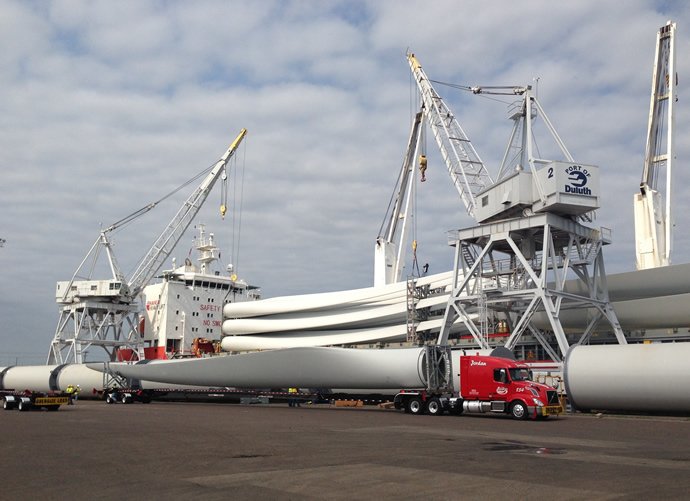 The HHL Tyne carried 31 wind turbine blades from Castellon, Spain, and German-made nacelle sets across the Atlantic Ocean and through the Great Lakes St. Lawrence Seaway to the Port of Duluth in Minnesota.
Photo courtesy of Duluth Seaway Port Authority 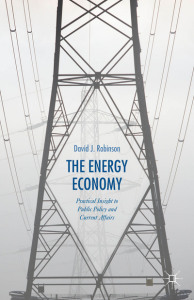 "The Energy Economy: Practical Insight to Public Policy and Current Affairs," by Montrose Group Principal and Ohio State University adjunct professor David J. Robinson, was released this week by publisher Palgrave-MacMillan. “Low energy costs cannot damper the bright economic future spurred by the energy sector," says Robinson, calling his book "a guide for regions, states and companies to transform their markets on the back of local energy production and through regulatory and market techniques."

The project lies within the service territory of San Isabel Electric Association (SIEA), a Tri-State member system serving nearly 19,000 members and 24,000 meters in all or parts of seven counties in southern Colorado. It's the second renewable energy purchase agreement for Tri-State this year, following the June announcement of the 76-MW Twin Buttes II Wind Project south of Lamar, Colo. In 2014, 24 percent of the energy Tri-State and its member systems delivered to cooperative members was generated from renewable resources — one of the top ratios among electric utilities nationwide. In February, the U.S. Department of Energy recognized Tri-State and SIEA as the 2014 Wind Cooperatives of the Year in the generation and transmission cooperative and the distribution cooperative categories, respectively. 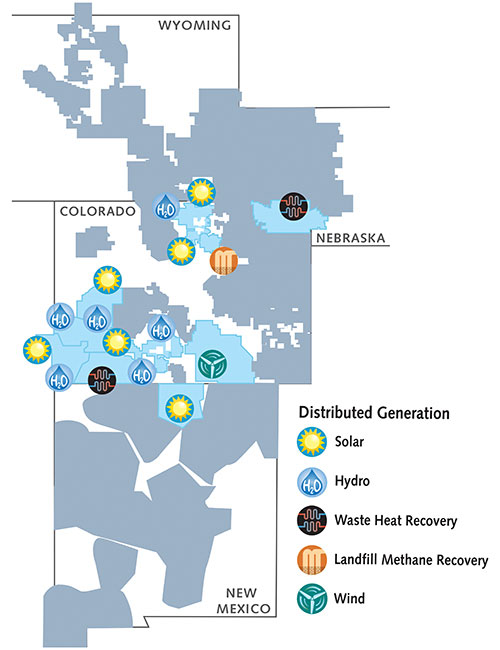 Duke Energy Renewables this week announced it has completed four solar power projects in Eastern North Carolina, adding 30 MW of solar in the towns of Creswell, Everetts, Battleboro and Sunbury. Work also has begun on its 80-MW site in Conetoe, N.C., the largest solar power project under construction east of the Mississippi. "With these additions to our existing 105-MW portfolio, we are more than doubling our solar capacity in North Carolina," said Greg Wolf, president Commercial Portfolio, Duke Energy. The company has an additional 132 MW of solar energy under construction that is expected to be complete by year end. Phase II of the DC institutions' solar project underway in Kelford and Whitakers will add 32 MW.

"We're proud to partner with Sumitomo to provide emissions-free wind energy to Mars and help them achieve their goal of carbon neutral operations by 2040," said Greg Wolf, president of Duke Energy's Commercial Portfolio. The energy produced is enough to make 13 billion SNICKERS® bars or 188 billion sticks of ORBIT® gum. 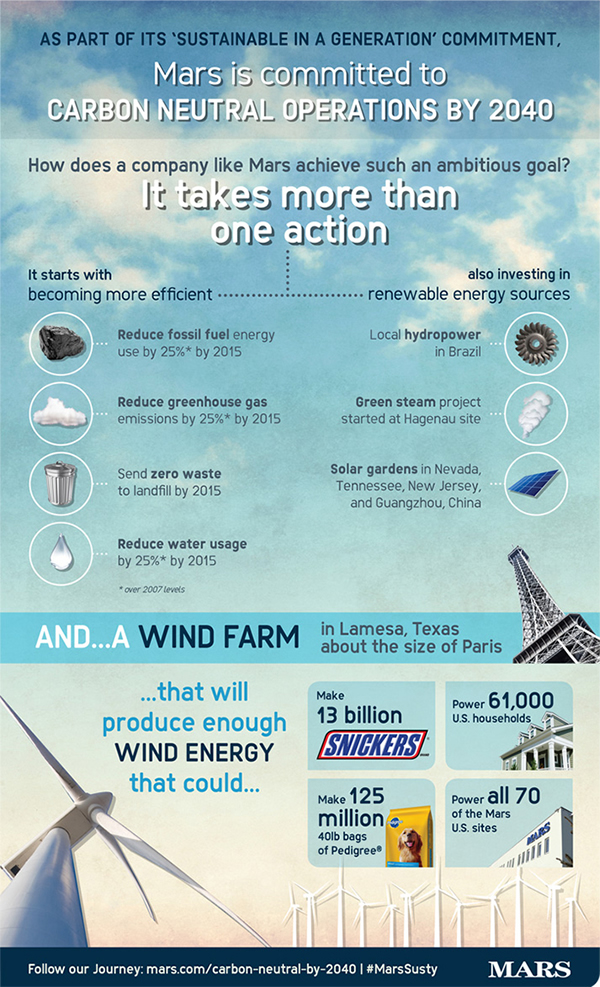