The International Finance Corporation (IFC), part of the World Bank Group, is supporting the government of the Indian state of Madhya Pradesh to implement a 750MW "ultra-mega" solar power plant near Rewa. It will be the largest single-site solar power project in the world, as the state government has made available 1,300 hectares (3,212 acres) of land. India is IFC's largest exposure, to the tune of more than $5 billion in committed projects as of June 30, 2015.

Apple in October launched two new programs to aid its manufacturing partners in China in reducing their carbon footprints. "Apple will partner with suppliers in China to install more than 2 gigawatts of new clean energy in the coming years," the company stated. As part of the program, Foxconn will construct 400 megawatts of solar, starting in Henan Province, by 2018. "Foxconn has committed to generate as much clean energy as its Zhengzhou factory consumes in final production of iPhone," Apple stated.

The New Year is a good time to check out the OECD's "Taxing Energy Use 2015" report, published last summer. It provides "a systematic analysis of the structure and level of energy taxes in OECD and selected other countries; together, they cover 80 percent of global energy use."

President Obama signed into law a bipartisan budget agreement that secured one of the biggest investments in the deployment of renewable energy in the nation’s history, specifically for solar and wind energy — extending tax credits for five years.

A lesser knownprovision of the budget deal is a two-year extension of the Energy Efficient Commercial Buildings Deduction, commonly know as the 179D energy tax deduction. The provision, signed into law by President Bush in 2005, allows property owners and developers to take a significant federal tax deduction for costs associated with installing energy efficient lighting, HVAC and/or building envelope systems in commercial buildings.

"Many commercial property owners and managers have not been aware of the tax deduction and, with this extension, properties built after 2006 could qualify if they have reduced energy use by 50 percent by industry standards," said Lee Ferry, president of National Cost, Inc., a Florida company that certifies eligible buildings for the 179D energy tax deduction. The company says potential tax deductions can add up to $1.80 per square foot for improvements to existing buildings or efficient new buildings opened in 2015.

Nearly 209,000 people were employed by the US solar industry in 2015, an increase from 174,000 a year earlier, according to The Solar Foundation's new National Solar Jobs Census. According to the Solar Energy Industries Association (SEIA), "over the next 12 months, solar companies expect to hire a total of 30,000 new people into the solar workforce, 13 times the projected 1.1-percent increase in employment in the overall U.S. economy over the same period. Separately, through the SunShot Initiative's Sustainable and Holistic Integration of Energy Storage and Solar PV (SHINES) program, the industry will use $18 million in new funding to make solar power dispatchable day or night, part of the umbrella Grid Modernization Laboratory Consortium.

For those following the solar aircraft Solar Impulse on its round-the-world tour that was interrupted by battery problems in Hawaii (awww ...), here's their latest update on restarting the journey this spring, with the goal of getting back to Abu Dhabi. 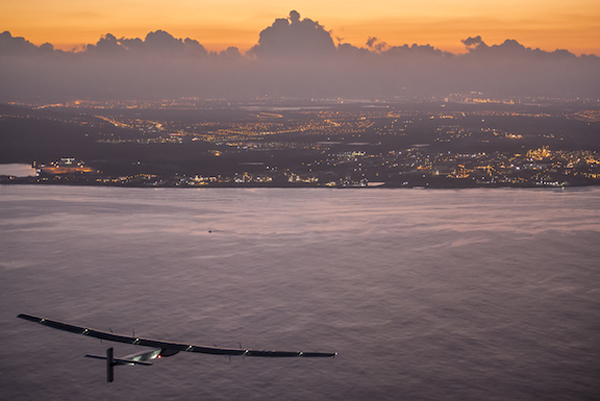 In July 2015, Solar Impulse 2 with André  Borschberg on the controls was about to land on Kalaeloa Airport after being  airborne for five consecutive days.
Photo courtesy of Solar Impulse

A new study identifies hundreds of chemicals used in fracking that may contaminate drinking water. More disturbing? "Toxicity information was lacking for 781 (76 percent) chemicals." The findings follow evidence of air quality contamination by fracking that came forth in 2014.

Dominion Virginia Power announced this month plans to invest nearly $2 billion per year through 2020 "to add new, clean generation — including solar energy — and to secure and upgrade the electric grid in Virginia and northeastern North Carolina." The company says it has the fastest growing demand for electricity in the Pennsylvania-New Jersey-Maryland (PJM) Interconnection, which serves 13 states and the District of Columbia. The planned investment is over and above the $5 billion forecast for the proposed Atlantic Coast Pipeline, a natural gas pipeline that is being built by a sister company to serve Dominion Virginia Power and other electric and natural gas utilities.

Renova Power Networks has partnered with San Diego-based CleanSpark to facilitate global deployment of best-in-class microgrid technology. The US market alone is projected to grow 300 percent over the next five years, from $225 million in 2016 to $1 billion in 2020, said the companies in a joint release. The companies are already working together on a number of microgrid projects in the US (California and New York), the Caribbean, Central America, Canada, and South Africa.