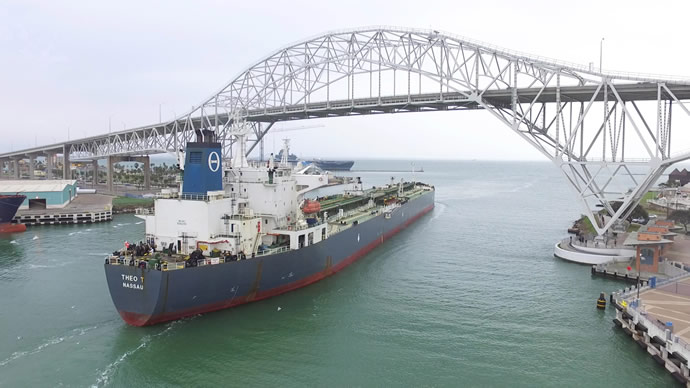 Thanks to the long-delayed November decision by the U.S. Department of State to reject a permit, the United States will not get the Keystone XL pipeline. But it will always have the Keystone State.

Big-ticket energy projects continue to move forward in the traditional Gulf Coast energy capitals in Texas and Louisiana, as well as in the shale-gas territories of Pennsylvania, Ohio, Texas, Louisiana and other states.

In some cases they even involve crude oil. On December 18 — 42 days after President Obama said of the Keystone XL decision, "... we’re going to have to keep some fossil fuels in the ground rather than burn them and release more dangerous pollution into the sky" — the U.S. Congress lifted the 40-year federal ban on exports of oil produced in the United States. The ban was enacted in the 1970s in response to an export embargo to the United States enforced by Arab members of the Organization of Petroleum Exporting Countries (OPEC). US oil production now is close to that of Saudi Arabia.

As 2015 wound down, San Antonio–based liquids terminal and pipeline operator NuStar Energy and ConocoPhillips loaded the first ship full of Eagle Ford light crude oil/condensate to be sold to international trading company Vitol, and it set sail on New Year's Eve from NuStar's North Beach Terminal at the Port of Corpus Christi.

NuStar has invested heavily in recent years to expand its South Texas Crude Oil Pipeline System to move crude oil from the Eagle Ford Shale play to Corpus Christi, including major investments at its port terminal.

“Based on our investments in Corpus Christi and our South Texas pipeline system, NuStar was well-positioned, equipped and staffed to immediately begin loading cargoes for export,” said NuStar President and CEO Brad Barron. “And we plan on further expanding our Corpus Christi operations to provide more options to our customers to move Eagle Ford Shale crude oil, whether it is being moved domestically or internationally. In fact, we are currently in the process of developing a second private dock in the Port of Corpus Christi.”

Barron noted that with the new dock, NuStar would have access to four loading docks in the Port of Corpus Christi, including two private docks, and would be able to load crude oil onto ships simultaneously on all four docks at a maximum rate of 90,000 barrels per hour. NuStar is not the only company expanding at the port.

“The Port of Corpus Christi is poised to become a world-class crude oil export facility," said Ruben Martin III, president and CEO of Martin Midstream Partners, "and Martin, through its existing Corpus Christi multimodal crude terminal and ongoing expansion of these facilities, is well positioned to service the needs of the largest crude oil vessels calling on the Port today as well as those which will call on the Port after the deepening of the channel."

Port Corpus Christi is connected via intricate pipeline systems to the South Texas Eagle Ford Shale and to the Permian Basin. 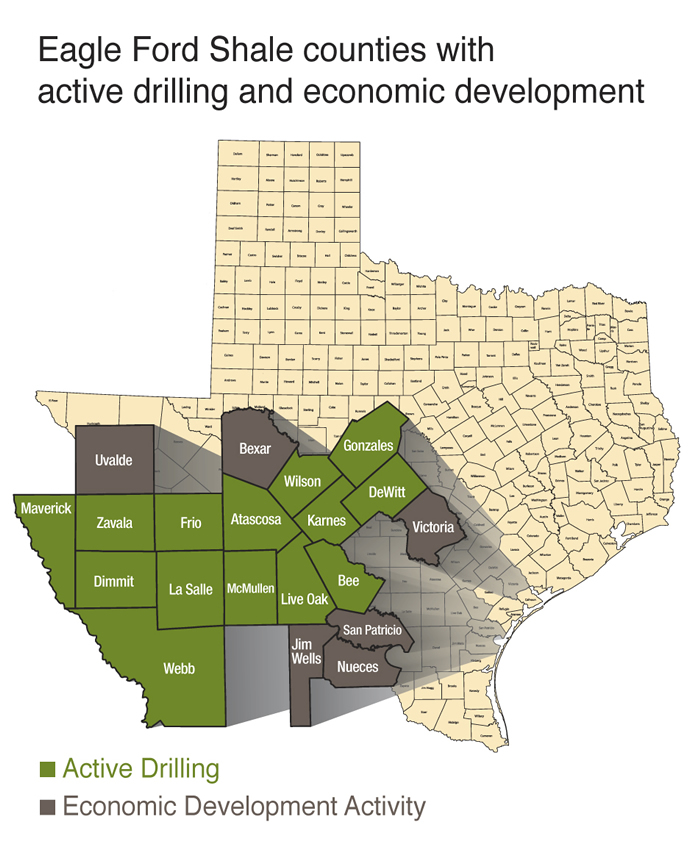 Eagle Ford Shale activity encompasses 20 counties in Texas, with much of the product capable of being funneled to Corpus Christi, the county seat of Nueces County.
Map courtesy of STEER

“Infrastructure improvements at Port Corpus Christi have placed our port in a unique position as a critical component in the export of US crude and condensate,"said John LaRue, Port Corpus Christi executive director. "Port Corpus Christi’s deep draft ship channel and strategic location to some of the largest production areas in the US provides a secure and competitive supply chain to markets worldwide. Future capital improvements including deepening the ship channel will accommodate larger vessels that are required to cost-effectively supply US crude oil to global markets."

The port projects that federal, state, and local taxes from expanding crude oil exports could reach $14.5 Billion in 2020.

"South Texas and the Corpus Christi region has greatly benefitted from the oil and gas industry — according to the most recent data available the economic impact was nearly $87 billion," said Omar Garcia, president and CEO of the South Texas Energy & Economic Roundtable (STEER).“Countless studies over the past few years have shown the benefits of opening oil exports. One such study by Rice University’s Center of Energy Studies shows that the Eagle Ford stands to benefit the most from the approval to export oil due to decreased transportation costs and type of production. “ Free trade of transportation fuels is already allowed in the United States. In 2013, the U.S. exported $150 billion of petroleum products. The lifting of crude oil exports will help narrow the trade deficit by $22.3 billion in 2020."

Whither Alberta? A glance at planned corporate projects in British Columbia, Alberta, Saskatchewan and Manitoba reveals dozens of multi-billion-dollar oil, gas and LNG investments still on the blocks. With the Canadian oil & gas industry having shed 36,000 jobs just this year, some of those projects seem like pipe dreams. But organizations such as the Canadian Association of Petroleum Producers (CAPP) are resolute.

"Canada continues to pursue all forms of energy transportation to markets in all directions," read a CAPP statement on Nov. 6. "This increased market access will create jobs, economic benefits and government revenues by taking advantage of growth opportunities in Eastern Canada, the US Gulf Coast, Washington state, California and emerging global markets."

XL denial or not, the effect of the market's dip has been XXL. A new JLL report on Canada's most expensive rents noted that 8th Avenue Southwest in Calgary was the list’s biggest mover, dropping from second last year with rents at $60.38 per sq. ft. (psf) to Canada’s fifth most expensive street in 2015 with rents dipping to $45.60 psf.

“The sentiment in Calgary is one of renewal,” said Damien Mills, executive vice president and managing director of Western Canada. “The city has clearly gone through a correction in 2015. Though it’s been tough on landlords, it will provide a needed expense break for tenants to fuel future development. We’re already starting to see improved financial reporting in the oil and gas sector, showing that the correction has forced a refocus and has shaped a platform for growth and sustainability.”

Interviewed from the Canadian Rockies near Banff in December, Mills said the skiing was great even if the outlook appears all uphill from here. Nearly every big energy company is reassessing and readjusting, including in the use of real estate.

"From a tenant's perspective, it was a superheated market, so tenants were paying pretty hefty premiums to remain," he said. Consequently, today, there is a lot of opportunity in Calgary in corporate space available for sublease. "It's an opportune time to be growing in Calgary," said Mills, noting the recent uptake of space by IT and BPO firm CGI. "People are getting real breaks on the rent. Anybody that has to do a deal is now able to avail themselves of rent a third less than they would have been paying a year and a half ago. We may see more people move into the downtown core as a result. For the first time in five or six years, space is going at a fairly reasonable discount."

That opportunity is not exclusive to Alberta. A Dec. 17 report from JLL said the downturn "has brought to light vast differences in the real estate markets of energy-intensive cities. Among its findings:

“Bold real estate moves are well-timed at this point in the oil and gas industry economic cycle; business doesn’t stop because revenues are down,” said Lindsay Brown, co-leader of JLL’s global Oil & Gas practice group. “Expansion into STEM-educated millennial talent-rich markets like Denver and Pittsburgh is being driven by Canadian and U.S. companies alike. This is a great time to tackle the industry’s pending talent shortfall as the current generation of senior executives begin to look towards retirement.”

Asked about the Keystone decision, Mills said, "Obviously, as a resource-rich country, limiting our access to markets creates problems. Not having Keystone is a big deal. It forces the oil companies to be creative, and put oil on rail and onto barges on the Mississippi River." The environmental lobby celebrated the Keystone rejection, he said, but with the "environmental consequences of putting that oil on rail, is that a solution?" he asked. "It's much riskier, and has a far worse history."

Now the pipeline to Eastern Canada makes even more sense (potentially replacing oil that the region currently imports from the North Sea in Europe). And the US rejection makes the Northern Gateway pipeline to Canada's West Coast as well as plans to export LNG look all the more promising. Mills said the economic impact of corporate investment in places such as Kitimat, BC, will only continue to grow, as companies shut off from one opportunity simply flow, like the products they purvey, toward others.

The new Economic Freedom of North America rankings from the Fraser Institute found that Canada continues to lead the US and Mexico, and that three of the top four North American jurisdictions were Canadian, with Alberta at 8.1 in first place, British Columbia at 7.9 in second place, and Saskatchewan at 7.8, tied for third with New Hampshire. The next highest states are South Dakota, Florida, Nevada, Oklahoma, and Texas, tied for fifth, with six other states at 7.7. 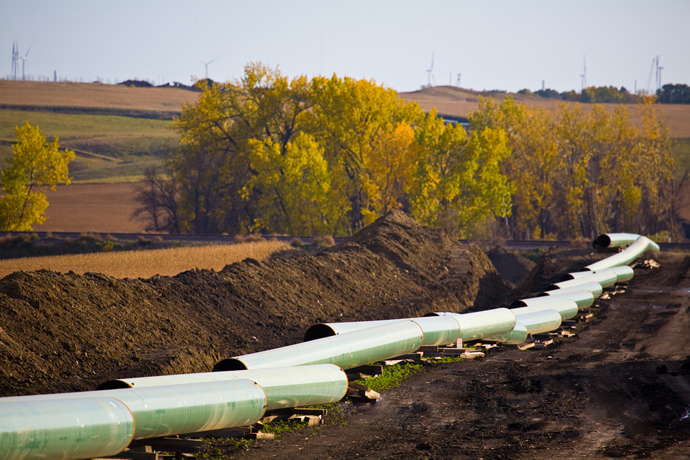 Unbroken: In filing suit against the US government in early January, TransCanada said the existing Keystone Pipeline System has now safely transported more than 1.1 billion barrels of Canadian and American oil through Canada and the United States. Shown here are sections of the pipeline when it was under construction in North Dakota in 1992.
Photo courtesy of TransCanada

Politics could change things, however, as the Alberta government in 2015 announced "a slew of policy and regulatory changes which, collectively, have made Albertans much less economically free," said the Institute. They include a royalty review panel that organizations such as CAPP fear will make it much more challenging to develop oil and gas resources. "While the policy changes are too recent to have informed this year’s comparative report, it is clear that once they are integrated into future rankings, they will profoundly impact Alberta’s economic freedom."

There are still a few volleys, however, in the battle over Keystone XL. Project developer TransCanada Corp. on Jan. 6 filed a Notice of Intent to initiate a claim under Chapter 11 of the North American Free Trade Agreement (NAFTA) in response to the permit denial, on the basis that the denial was arbitrary and unjustified.

"Through the NAFTA claim," said the company, "TransCanada will be seeking to recover more than US$15 billion in costs and damages that it has suffered as a result of the U.S. Administration's breach of its NAFTA obligations."