Progress in Rwanda, Senegal and other African nations strengthens the grid while puncturing misperceptions. 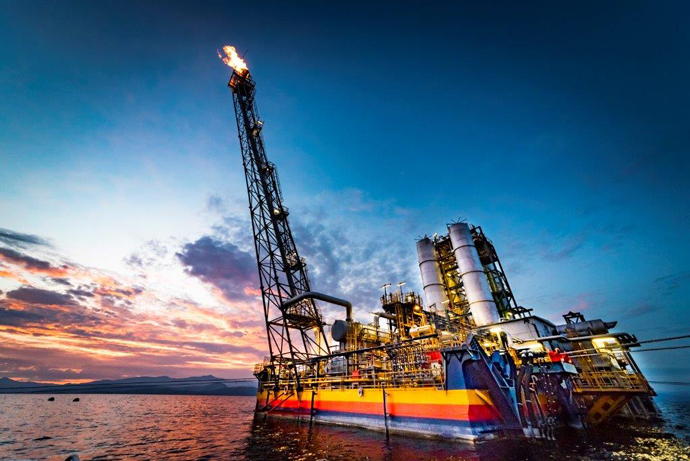 Turning landfill gas into energy has become nearly commonplace. Generating power from naturally occurring methane is not common at all. But it's happening for the first time in the world on the shores of Lake Kivu in Kibuye, Rwanda.

It was there in May that Rwanda President Paul Kagame helped inaugurate KivuWatt, the world’s only facility for extracting naturally occurring methane gas that is then used to generate electricity. The developer of the project is New York–based ContourGlobal, which has a family of ongoing power generation projects underway throughout Africa, as well as in such locations as Brazil and Eastern Europe.

"By reducing the amount of gas in Lake Kivu, the possibility of a gas release caused by natural forces will be reduced," said a release from the Emerging Africa Infrastructure Fund (EAIF), which co-arranged financing and also provided $25 million in senior debt for the project. "Because of the Lake Kivu development, Rwanda now has a safer lake, greater electricity generating capacity, cheaper and more reliable electricity and the Lake Kivu area has become more attractive as a business location." 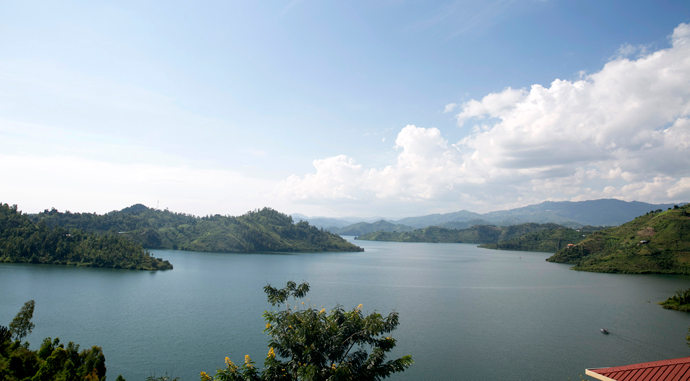 Placid on its surface, the beautiful Lake Kivu in Rwanda contains unique gas deposits that were potentially catastrophic.
Photo courtesy of the Office of President Paul Kagame

“Many people thought it was impossible to be successful with this," said President Kagame, "but we are happy today that things have proved to be different.”

EAIF, part of the donor-backed Private Infrastructure Development Group, is funded by the governments of the UK (DFID), Switzerland (SECO), Sweden (Sida) and The Netherlands (DGIS) and by private-sector banks and development finance organizations.

Though it's growing fast, Rwanda has very low levels of electrification and heavy reliance on imported diesel. ContourGlobal’s technology is the first in the world to make it possible to use Lake Kivu’s methane gas to generate electricity. The facility, which has been fully operational since December 2015, produces 25 MW of power and has helped Rwanda achieve 20 percent electrification. At the inauguration, ContourGlobal announced that its Lake Kivu operations were already exceeding expectations. The facility is expected to produce 34 MW by the end of next year and 100 MW by 2019.

From Threat to Asset

ContourGlobal's process brings gas-laden waters from 35 bars to 2 bars of pressure via a gas separator where gas bubbles are extracted from the water. Raw gas is then washed in four wash towers, ultimately producing clean methane. The gas extraction facility sits on a barge anchored 13 km. (eight miles) offshore. Phase 2 of the project will add two or three more barges. ContourGlobal is also engaging with the local population, training and developing local workers and funding charitable projects such as providing a library and computers to Kibuye schools. 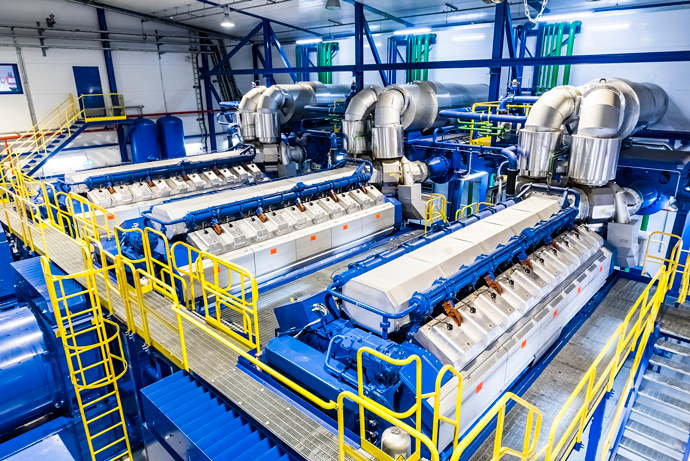 ContourGlobal's process brings gas-laden waters from 35 bars to 2 bars of pressure via a gas separator where gas bubbles are extracted from the water.
Photo courtesy of ContourGlobal

The megawatts and the philanthropy are great. But just as meaningful is the mitigation of a potential catastrophe that the gas represented.

"In 2008 we entered into a partnership with the Government of Rwanda to transform the menace of Lake Kivu’s unique gas deposits into the source of something good for the people of Rwanda," said Joseph C. Brandt, president and CEO of ContourGlobal. "The hard-fought KivuWatt project has realized the Lake’s potential envisioned by President H.E. Paul Kagame. We are proud to have catalyzed his vision into a substantial operating project that is mitigating the threat of environmental catastrophe while providing clean, reliable electricity to Rwanda."

According to EAIF, among the businesses benefiting from the proximity of the new power station are the area’s tea planters, who are able to increase the productivity of their processing and packaging operations. "Other economic developments, particularly in leisure and tourism, are now more likely and public services like education and health care can be more productive because of more reliable electricity," said the organization, which since 2002 has committed over US$1.2 billion to 63 projects in 20 countries. The Private Infrastructure Development Group (PIDG) was set up by a number of Western governments in 2002 to help overcome obstacles to private sector involvement with private infrastructure in sub-Saharan Africa. 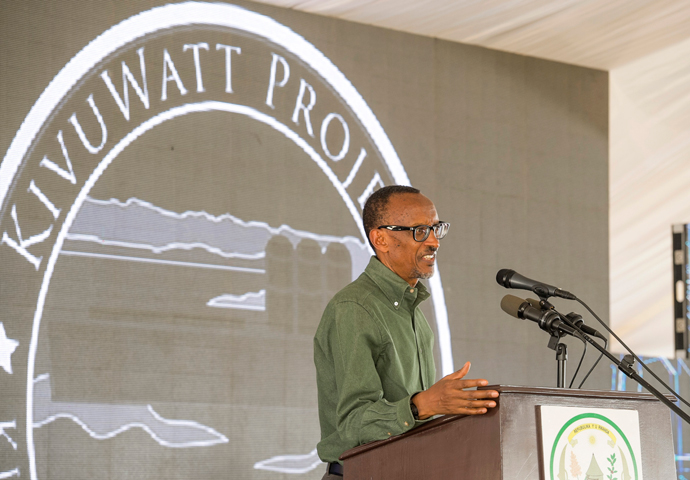 Rwanda President Paul Kagame helped inaugurate the KivuWatt project in May. In remarks to the African Union Summit state banquet on July 17 in Kigali, Kagame said, "We must ... take responsibility for the corrosive cynicism that pervades discussions about Africa, even among our own young people. For centuries, the minds of Africans were warped into the most effective instruments of our own oppression, more punishing than any whip ... But for us today, history is no excuse for refusing to see all that is good about Africa and ourselves."
Photo courtesy of the Office of President Paul Kagame

"Every type of infrastructure project imaginable is under way in Africa, but energy generation is the biggest story," says EAIF Chairman David White in emailed responses to questions from Site Selection. "The need is enormous. The Fund I chair has a strong new business stream in renewable energy and it's renewable technologies that are out in front in many regions of Africa. Wind, solar and thermal energy projects are really coming into their own, and some excellent investment opportunities are to be found."

ContourGlobal owns and operates a portfolio of 62 power plants in both thermal and renewable technologies, with approximately 4,000 MW of installed gross capacity in operation, and 1,800 employees. The projects are located in 20 countries on three continents. The company began operating in Africa in 2008 when it developed and constructed its flagship power plant in Lome, Togo. That plant earned the US Overseas Private Investment Corporation’s 2014 Impact Award for Critical Infrastructure. Today

ContourGlobal has nearly 2,000 MW of projects under development throughout Africa.

In 2013, ContourGlobal acquired an existing brownfield thermal power plant in Rufisque, Senegal, just outside of Dakar, and began developing and constructing a new 53-MW thermal energy facility. The facility, which began operations in April and was officially inaugurated in June, will be the lowest-cost liquid-fuel power plant in Senegal, "and can easily be converted to burn clean natural gas," says the company. In December 2015, ContourGlobal announced an expansion of the project to include an additional 33 MW of installed capacity to be constructed at the existing site by October 2016.

Backed by an innovative financing scheme involving OPIC and IFC, the plant's first 53-MW phase took only 14 months to construct. It also rode a wave of policy momentum. 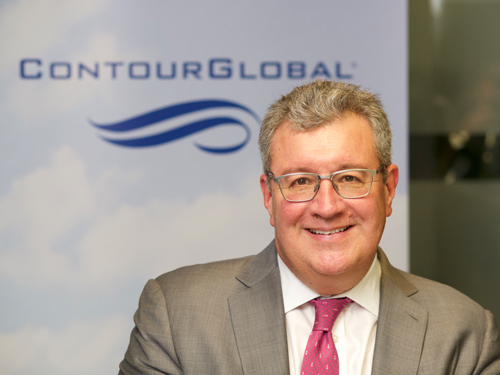 "In 2008 we entered into a partnership with the Government of Rwanda to transform the menace of Lake Kivu’s unique gas deposits into the source of something good for the people of Rwanda."
— Joseph C. Brandt, President and CEO, ContourGlobal

“ContourGlobal and Senelec committed to the Cap des Biches power project in Washington, DC, in August 2014 during the Africa Leaders’ Summit convened by US President Barack Obama," said Joseph Brandt at the June inauguration. "This power plant has been enabled by two visionary commitments to eliminate poverty and bring the benefits of development to the African continent — President Obama’s Power Africa Initiative and President Macky Sall’s Plan Senegal Emergent.”

EAIF's David White has been involved in Africa’s economic development for four decades. Chairman of Goldtree Holdings Ltd, a Sierra Leone-based palm oil business, he is also a director of Feronia Inc, an agriculture company based in the Democratic Republic of Congo; and is a member of the investment committee of Africa Agriculture Fund. He says the EAIF is often an early investor in private-sector projects in post-conflict countries.

"As conflict, or the economic disruption of natural disaster, recedes, it is vital that private sector investors are able to access finance," he says. "In these circumstances traditional lenders are often risk-averse and money is not always easy to come by at affordable rates. We take a more flexible and supportive approach to project finance," including the option of being part of a syndicate. 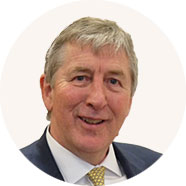 “In Africa, energy is the key that unlocks everything from investment in integrated agriculture, high quality tourism and hospitality, manufacturing and processing and the power for digital communications. It changes the quality of life for families and makes public services like health and education more productive."
— David White, Chairman, Emerging Africa Infrastructure Fund

"Africa needs in the region of US$90 billion a year to meet its infrastructure needs," White says. "Most of that can only come from the private sector in Africa and worldwide. Our role is to support projects, often in difficult places, that have smart management teams that have the technical, financial and operational ability to make their business work for a long time to the benefit of many."

EAIF has supported some 57 projects in 19 Saharan countries and invested around US$1.2 billion. In 2015 it closed eight deals in telecommunications cell phone and data towers (Congo Republic, Ghana) and a pan-Africa telecommunications satellite constellation project; a hydropower scheme in Uganda; a mineral project support facility in Mozambique; the expansion of a metals recycling plant in Nigeria; a solar farm in Uganda and a loan towards the rehabilitation, repair and development of three brownfield palm oil plantations in the Democratic Republic of Congo. The O3b satellite constellation expansion project has gone live, as has the enlarged Azito Energie power station in the Cote d'Ivoire. And the Gigawatt Global solar farm, also in Rwanda, recently began operations, adding 6 percent to Rwanda's energy capacity and providing enough power for 15,000 homes.

The most recent ITU index of ICT networks continues to show emerging Africa far down the list. Asked if ICT is among the most promising infrastructure investment arenas in Africa today, White calls it "a key sector for EAIF," noting the organization's 10-year track record, beginning with an undersea cable investment in Kenya that has been central to the development of the digital economy there.

"The Fund has supported the 'hardware' of infrastructure — cable, transmission towers and satellites, and of course power generation and transmission to make it work," he says. "But infrastructure is now also about money movement and payments systems; markets for weightless goods such as apps, music and film; the delivery of public services; systems for health care management and remote care and diagnoses; smart manufacturing, advanced agriculture and the systems and processes needed to move farm produce and manufactured goods up the value chain. EAIF is in discussion with many potential investors." 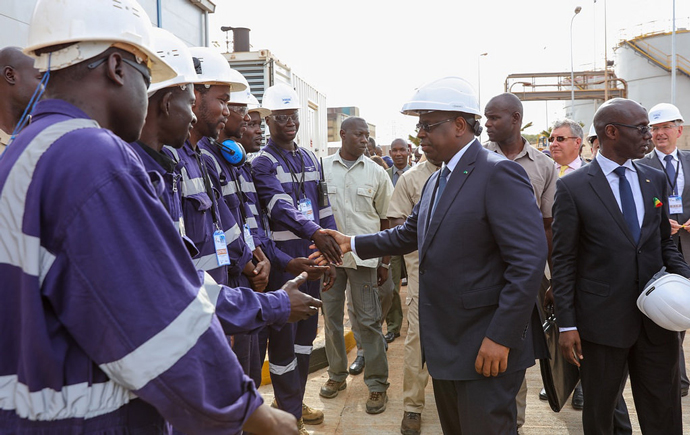