Tenant Energy Plans Are All About ROI

Sustainability programs come and go, but following the ULI's new program could help yours stick around a little longer. 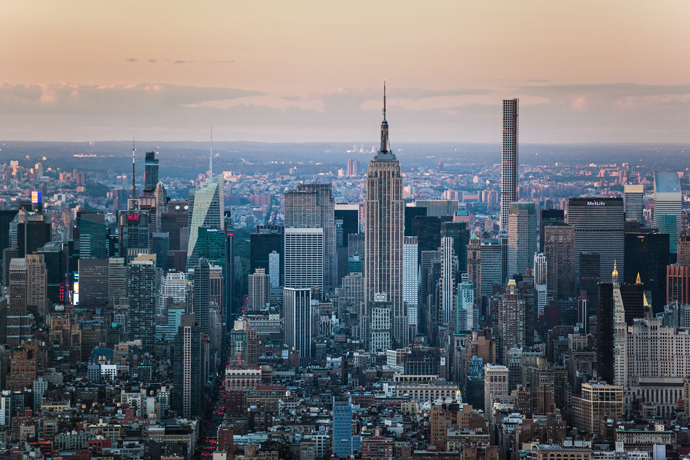 The Empire State Building stands out from the crowd in more ways than one, thanks to a groundbreaking energy retrofit.
Photo © NYC & Company/Tagger Yancey IV, www.nycgo.com.
by Adam Bruns

From the corporate end user's perspective, the highlight of this year's Urban Land Institute fall meeting in Dallas, attended by about 6,000 people in late October, may have been the debut of a new ULI program, the Tenant Energy Optimization Program, that will help commercial building tenants reduce energy consumption and lower energy costs.

Their remarks were preceded by a film in which Cushman & Wakefield CEO John Santora spoke to the ultimate motivator for such a program, after using it at successfully at C&W: "As you start to narrow down the number of properties you look at, how sustainable those buildings are is very important to our corporate clients. Having the ability to dig down and actually look at the ROI had a major impact for us."

Phillips explained from the podium that the program originated from talks with Malkin based in part on the now-long-running energy use programs at the Empire State Building since its retrofit. Tenant spaces comprise over 50 percent of occupied space, he said, "so if we can better manage how we build out our tenant space, we can have a dramatic impact."

Or as Santora stated in the film, "It can impact a city, a portfolio of properties, a neighborhood ... and ultimately the country." If all commercial office real estate owners and tenants in the United States reduced energy consumption by 30 percent, the reduction could translate into more than $6 billion in energy cost savings per year, say the program's leaders.

Collaborative by nature, the program embodies a case study approach, based on practical, applied solutions, "and the best practices and case studies are always grounded in the business case," said Phillips. "That's characterized ULI for the past 80 years. So this program is a perfect fit."

"What we learned at the Empire State Building energy efficiency retrofit is tenants consume between 50 and 65 percent of energy consumed in office buildings," said Malkin. "We also learned that no incentive existed to reward tenants for low energy consumption."

Once his team confirmed that their lessons learned could apply to tenant installations, Malkin approached the US Green Building Council in early 2009 to see about incorporating the tenant program into its LEED certification process. The result?

"They still have not," Malkin said in Dallas. However, the team did convince the EPA that its equally well known Energy Star program doesn't take into account the divergence between tenant energy consumption and whole-building energy consumption. And in April 2015 new legislation was passed that will see a new program called Tenant Star gradually incorporated into the Energy Star program. The comment period for the new program just ended last week, with the official recognition expected to roll out by the end of 2017 for office tenants, and soon afterward for retail and warehouse tenants.

The centerpiece of the TEOP program is a 10-step process in three phases of pre-lease; design and construction; and post-occupancy: 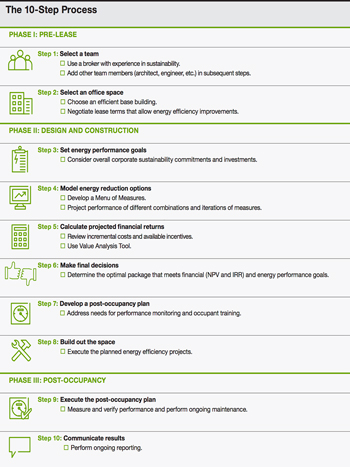 It then gets into the nitty gritty, abandoning green platitudes for real-world actions. For instance, for Step 2: Select an Office Space, after already considering only sub-metered spaces that have energy-related benchmarking data, the program recommends, "Review the lease for central-building-system operating expense pass-through provisions, energy-aligned clauses, utility billing structures, and efficiency design criteria. Negotiate lease terms with the landlord that allow energy efficiency improvements."

The new ULI program claims tenants will realize savings of between 30 and 50 percent, see payback in three to five years and realize an annual internal rate of return (IRR) of 25 percent. Among the program's attributes is the fact it's scalable and replicable. And it's evidence-based, built on a foundation of 10 case studies:

"The lessons learned will change the way real estate occupancy by office tenants is conducted," Malkin said. "By following this program, you can have IRRs [internal rates of return] of between 20 and 30 percent over the life of the lease. This alone should be motivation for broad adoption."

Quartararo was at JLL at the time of the Empire State Building retrofit, and calls it the first time an energy efficiency retrofit not only proved its benefit, but tied it to property value and rent value.

"Tony said over and over to us, 'If we only do this at the Empire State Building, we will have failed,' " Quartararo said in Dallas. He's looking at how to implement it at JP Morgan's own new 1-million-sq.-ft. campus that will house thousands of employees in Plano, Texas.

"This issue has become a priority for our people — only millennials but all of our staff," he said, via the new JP Morgan Chase High Performance Workplace progra. "We're proud to have made the commitment to launch this in conjunction with LEED. It's almost an issue of 'Why wouldn't you do this?' You almost have to go out of your way to not do some of these things today. That will be our perspective going forward."