Scotland's fondness for renewables comes in part from its lousy weather, says one expert in this Washington Post piece.

Not far away, a $1.6-billion tidal energy project in Swansea, Wales, that Site Selection readers will remember from years ago is still creeping forward, as this story from The New York Times explores. GE has a major role in the project.

Ukraine's minister of ecology and natural resources announced last summer a plan to seek out investors from multiple countries who might be interested in a massive solar-power farm in the exclusion zone at Chernobyl, where the nuclear plant meltdown occurred 30 years ago. The latest news reveals Chinese interests pursuing the project, which the minister says could attract up to $1 billion in investment.

If it weren't for that pesky lending freeze on lending at the US Export-Import Bank thanks to the failure of the US Congress to reauthorize the bank, nuclear power in India would be surging. A Reuters exclusive reports that the Indian government is seeking loans totaling up to $9 billion to finance the potential construction of six Westinghouse Electric reactors in Andhra Pradesh. The nation's goal is to expand nuclear power capacity by a factor of 10 by 2032, to 63,000 MW.

After developing early phases of the area in the 2000s, France's Total early this month signed a Heads of Agreement (HoA) with the National Iranian Oil Company (NIOC) for the development of phase 11 of South Pars, the world's largest gas field. The South Pars 11 project (SP11) will have a production capacity of 1.8 billion cubic feet per day, or 370 000 barrels of oil equivalent per day, to be fed into Iran's gas network. Total will operate the SP11 project with a 50.1-percent interest alongside Petropars (19.9 percent), a 100-percent subsidiary of NIOC, and the Chinese state-owned oil and gas company CNPC (30 percent).

Total is one of the players in the Fort Hills Energy oil sands project in the Athabasca region of Alberta. Fluor recently completed the fabrication and shipping of 358 modules for its portion of the open-pit truck and shovel mine, owned by Fort Hills Energy LP, a partnership among Suncor Energy, Total E&P Canada Ltd. and Teck Resources Limited. 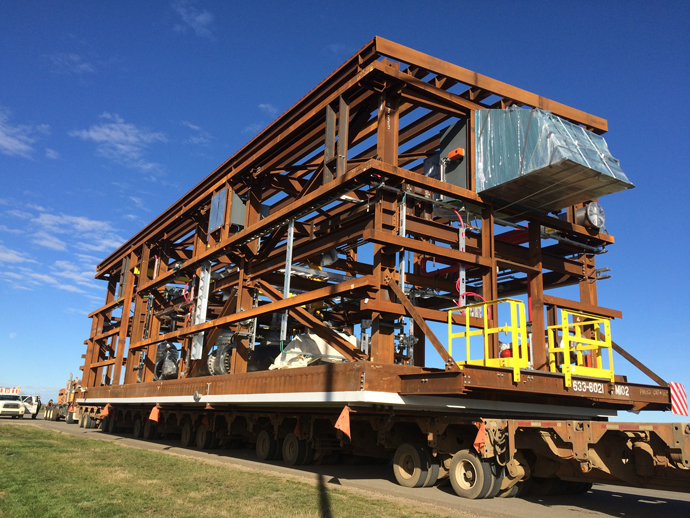 One  of the 358 modules fabricated and shipped by Fluor to the Fort Hills Energy  L.P. oil sands mining project in the Athabasca region of Alberta, Canada.
Photo  courtesy of Business Wire

As TransCanada awaits a potential reversal by the incoming Trump administration of the US rejection of the Keystone XL pipeline, it continues to move forward with natural-gas pipeline capacity expansion in Canada, earning in October the Canadian government's approval of the company's $1.3 billion 2017 NGTL System Expansion Project.

The expansion project includes five new pipeline sections totaling 230 kilometers (143 miles) and the addition of two compression facilities. "Expansion of the NGTL System is an important part of TransCanada's industry-leading $25-billion near-term capital program," said Russ Girling, TransCanada's president and CEO. The project will require the purchase of $1.2 billion in Canadian goods and services, including approximately $800 million in labor income during construction.

Rolls-Royce announced in August it had provided three MTU Onsite Energy 20V 4000 generator sets to be installed at the Port of Callao, the chief seaport of Peru and the largest port on South America’s West Coast. The port, owned by APM Terminals, is undergoing an extensive modernization to increase the port’s capacity, ability to handle large vessels, and capability to support the growing agriculture sector. "The Port of Callao is being transformed to become the new center of trade and development for Peru and the entire Latin American region," said Julio Valeriano, project manager at JJC General Contractors South America. "Backup power is essential to keep power running to equipment that is critical to the port’s operation, such as gantry cranes, refrigeration systems and substations."

After announcing in August 2014 its intention to build a $229-million, 600,000-metric-ton-per-year wood pellet facility in Pine Bluff, Arkansas, Highland Pellets LLC last week cut the ribbon on the facility, which will create just 68 direct jobs but almost 1,000 indirect jobs in Jefferson County and surrounding communities. Wood pellets are considered a sustainably sourced feedstock for use by European industrial utilities to lower carbon footprint and provide sustainable base load power. There are more than 18.8 million acres of forestland in Arkansas, covering more than half of the state. 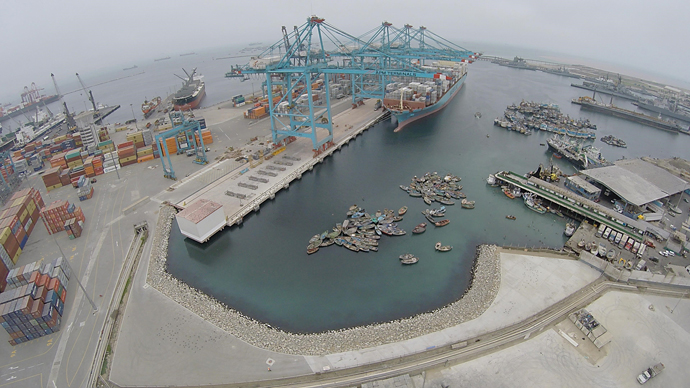 That wood pellet plant was helped by the opening in early November of a 17-MW substation from Entergy Arkansas (transmitting non-wood-pellet-fired power). Meanwhile, Entergy Louisiana announced on the same day as Highland Pellets' groundbreaking the approval by the Louisiana Public Service Commission of a major new gas-fired power plant in Montz, in St. Charles Parish just north of New Orleans. The $869-million, 980-MW plant will open in June 2019. According to analysis by economist Dr. Loren Scott, the plant’s construction phase will generate on average an estimated 2,000 direct and indirect jobs a year across the state, increase Louisiana business sales by $1.4 billion and grow household earnings by $476.8 million.