Even as the media excoriates itself for its own stereotyping of Native Americans, examples of fine reporting from the Dakota Access pipeline standoff do exist here and there. For background, revisit our report from the midst of the North Dakota boom in 2010.

What happens when a Macarthur genius grant recipient and his colleagues set out to map every bit of energy usage in the United States? Get ready to have your mind officially blown.

Want to see one reason American Electric Power is an economic development leader? Read this contribution from a recent ESRI newsletter, about how AEP's team uses ArcGIS to aid community and business growth.

In the latest Platts Top 250 Global Energy Company Rankings®, South Korea’s Korea Electric Power Corp (KEPCO) "was the surprise in the global Top 250 leaderboard this year," said Platts. "At 2nd place, not only was it in the Top 10, but the Top 5, and the only electric utility in the cherished upper ranks," after bolting from No. 41 in 2015. “As a sector, electric utilities retained the biggest share of rankings by number, with more than a half dozen new entrants taking the sector’s share to 28 percent of the total,” said Robert Perkins, Europe, Middle East and Africa (EMEA) oil news senior writer of S&P Global Platts. “The outright number of IPPs [independent power producers] in the roster jumped nearly 50 percent to the highest level since the rankings began in 2002.” The Asia-Pacific region contributed 13 more players in the overall global ranks this year than last, taking the region to its highest representation since the rankings began. 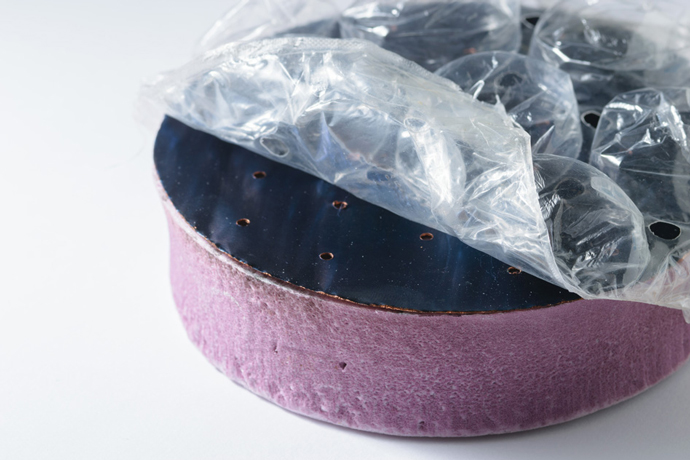 Bubble wrap, combined with a selective absorber, keeps heat from escaping the surface of the sponge, thus helping to create steam.
Photo by George Ni courtesy of MIT

MIT engineers have invented a bubble-wrapped, sponge-like device — a "solar vapor generator" — that soaks up natural sunlight and heats water to boiling temperatures, generating steam through its pores. "From their experiments — including one in which they simply placed the solar sponge on the roof of MIT’s Building 3 — the researchers found the structure heated water to its boiling temperature of 100 degrees Celsius, even on relatively cool, overcast days," said an August release from MIT. "The sponge also converted 20 percent of the incoming sunlight to steam. The low-tech design may provide inexpensive alternatives for applications ranging from desalination and residential water heating, to wastewater treatment and medical tool sterilization." 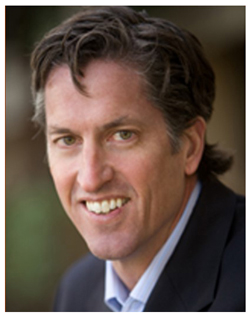 Kansas City–based Terracon, a leading provider of environmental, facilities, geotechnical, and materials services, has named Blair Loftis as the national director of power generation and transmission. Since joining the firm in 2015, Loftis has served as national program manager of renewable energy from his office in Portland, Oregon. Site Selection readers will remember Loftis from this 2010 piece looking at the potential of the federal government's RE-Powering America's Land program.

Leaders from Georgia Power and the Department of the Navy (DON) joined elected officials, community leaders and other dignitaries at Naval Submarine Base (SUBASE) Kings Bay near St. Marys, Georgia, earlier this week to mark the start of operations of a new on-base solar facility. The 30-MW alternating current, or 42-MW direct current, solar generation facility is the first completed by Georgia Power in collaboration with the DON and joins a similar 30-MW on-base solar facility recently completed with the U.S. Army at Fort Benning, Georgia. Overall the utility is developing more than 150 MW of solar generation through projects with the military, including other projects under construction at Fort Gordon, Fort Stewart and the Marine Corps Logistics Base (MCLB) Albany. Georgia Power recently received approval from the Georgia PSC to add up to 1,600 MW of new renewable generation by 2021.

The SUBASE Kings Bay solar facility was built and is owned and operated by Georgia Power with energy delivered to the state's electric grid at or below the company's avoided cost (the amount projected it would cost the company to generate comparable energy from other sources). The solar project at SUBASE Kings Bay occupies 254 acres [103 hectares], utilizes approximately 133,000 ground-mounted photovoltaic (PV) panels and is estimated to represent a $75 million investment at the installation. 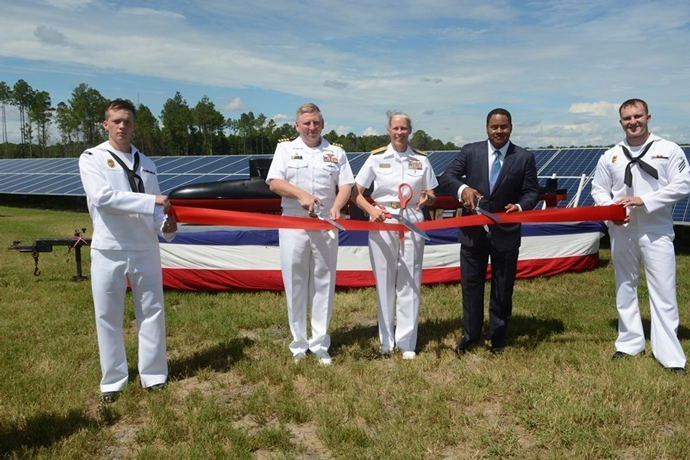 Just to the south of St Marys, JAXPORT’s Talleyrand Marine Terminal earlier this month served as the transportation hub for a 269,000-pound gas-fired, reciprocating engine en route to the Gainesville Regional Utilities South Energy Center in Gainesville, Florida. Freight forwarder deugro (USA), Inc., oversaw the process as Seaonus workers used the ship’s onboard cranes to lift and position the Wärtsilä engine onto the railcar. The use of Talleyrand’s on-dock rail facilities provided the shortest distance to the engine’s final destination. 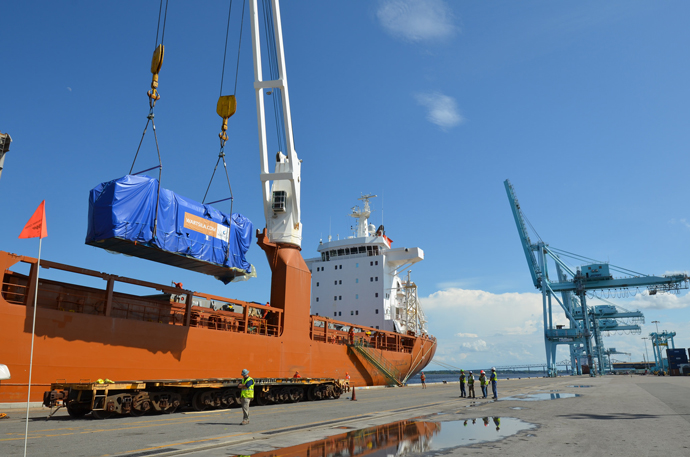 The 37-foot long Wärtsilä engine arrived aboard a Spliethoff vessel from Rauma, Finland, and master riggers at Talleyrand transferred the cargo from the ship to a dock-side 12-axle railcar.
Photo courtesy of JAXPORT

About 14 percent of commercial buildings in the United States are owned by a government agency at federal, state, and local levels. The latest data from EIA's Commercial Building Energy Consumption Survey (CBECS) show that, from 2003 to 2012, the average energy intensity, or energy consumption per square foot, of government buildings decreased by 23 percent, from 105,300 British thermal units per square foot (Btu/sqft) to 81,200 Btu/sqft. Over the same period, the average energy intensity across all commercial buildings decreased by just 12 percent, from 91,000 Btu/sqft to 80,000 Btu/sqft.

"Governments at all levels have passed legislation or adopted specific goals and targets regarding energy use in both new and existing buildings," said the EIA, including a 2015 Executive Order requiring a reduction in overall federal building energy intensity of 2.5 percent annually between 2015 and 2025. Meanwhile, best practices are yielding results as well: "Building automation systems that automatically control lighting and heating, cooling, and ventilation (HVAC) systems are present in about one in three government buildings, more than twice the rate as in nongovernment buildings. Formal energy management plans, which involve setting and regularly monitoring specific energy targets, are also significantly more common in government than in nongovernment buildings (27 percent and 8 percent, respectively)." 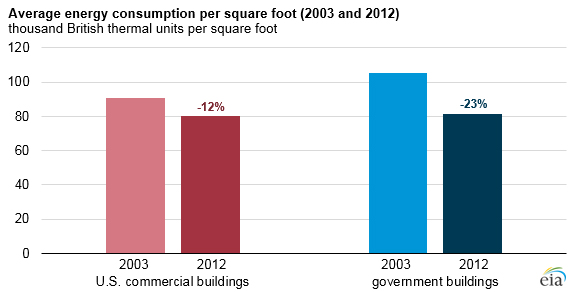 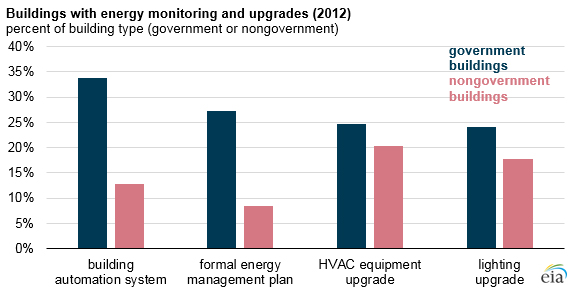 The Kansas City Area Development Council (KCADC) announced it is leading robust regional support for Great Plains Energy Inc., the parent company of KCP&L, in its acquisition of neighboring Westar Energy, Inc. The $12.2-billion deal will add capacity and cost savings for residents and businesses in the 18-county, two-state Kansas City region, KCADC stated. The transaction is on track and expected to close in the second quarter of 2017. The downtown Kansas City, Missouri, and downtown Topeka, Kansas, headquarters will remain after closing.

“Strong, locally-owned utilities are a cornerstone of healthy regional economies,” said Tim Cowden, president and CEO of KCADC. “The combination of KCP&L and Westar Energy will ensure good jobs stay here and will allow us to maintain our competitive electric rates, one of our region’s distinct advantages and one of the most important considerations for site selection consultants and companies looking to relocate to our area.” Once the transaction is complete, the new utility will have more than 1.5 million customers in Kansas and Missouri, nearly 13,000 MW of generation capacity, almost 10,000 miles of transmission lines and more than 51,000 miles of distribution lines.