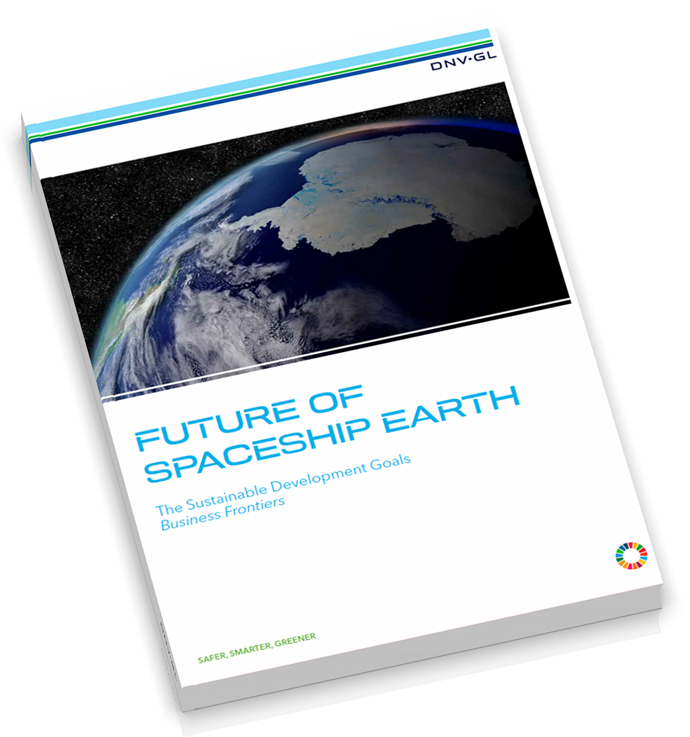 A Norwegian firm's analysis says we aren't very far along on the path toward sustainable development, but some leading companies could help get us there faster.

As world leaders converged on New York City this week for the 71st General Assembly of the United Nations, Norwegian global advisory firm DNV GL this week issued its Future of Spaceship Earth report in order to evaluate how much progress the globe's countries and companies are making toward reaching the UN's 17 Sustainable Development Goals (SDGs) by 2030.

Not much, it turns out. But there's still time to reset the course.

The report's forecast shows that "none of the goals will be met in all regions of the world," the firm announced. "Likewise, no single region will achieve the necessary progress towards all the goals. The scale of the challenge is such that urgent, extraordinary action is now needed.

"Business is uniquely positioned to drive this magnitude of action. The report highlights 17 global companies at the frontier of progress on the SDGs: Tata, Danone, HiTechnologies, ARM, Symantec, Grundfos, SolarWorld, NYK, Hydro, Safaricom, Siemens, Marks & Spencer, Iberdrola, Cermaq, APP, Calvert Investments and Unilever. These pioneers are driving sustainable change through innovations, partnerships and adjustment of business models. The Sustainable Development Goals have become a blueprint for companies to reshape and future-fit their business."

All the companies featured in the report are signatories to the UN Global Compact, an initiative to encourage businesses worldwide to adopt sustainable and socially responsible policies and thus contribute to a sustainable future. 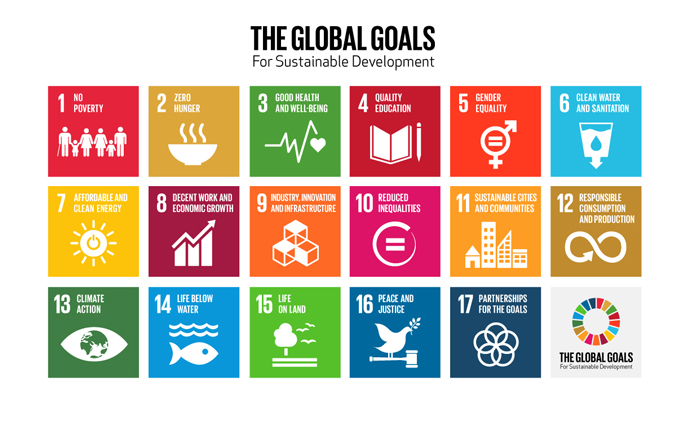 Among the report's key findings:

The private sector has a key role to play, representing 60 percent of the world’s GDP. "Business can be the swing factor: The actions companies choose to take have the power to amplify change — for better or for worse," says DNV.

The report showcases what it calls extraordinary action toward the global goals by the 17 "frontier companies" in specific areas. The leader in taking us toward affordable and clean energy? Germany's SolarWorld.

“When we are no longer dependent on a utility, private persons as well as commercial entities can start supplying themselves with renewable energy," says SolarWorld Vice President Milan Nitschke. "This will be the key driver." 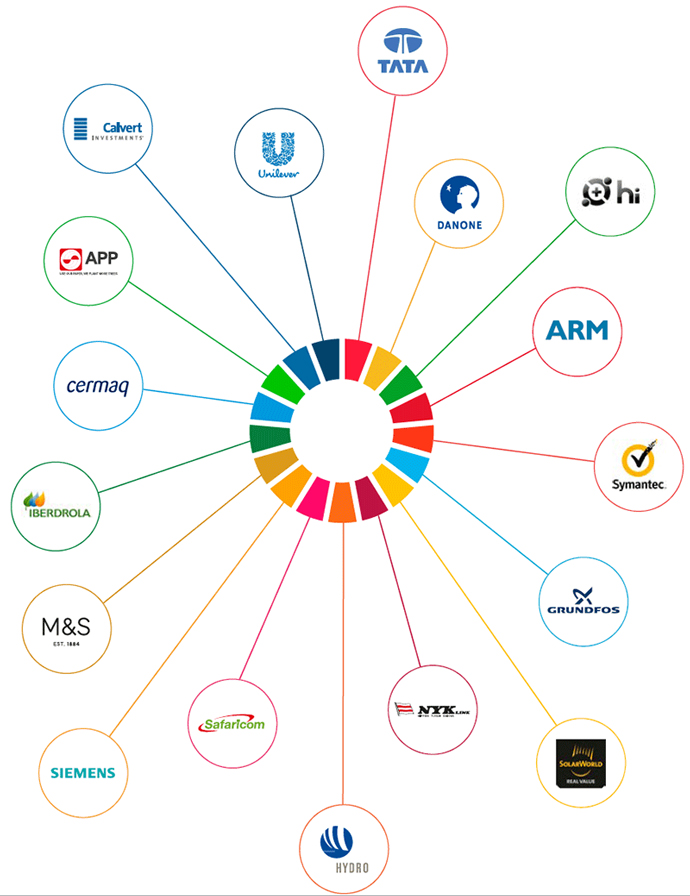 So will decentralization: "We don't want three or four or five or even 10 entities to decide on electricity structure," Nitschke says, "we want millions — in fact hundreds of millions — of people in the electricity business in the end.”

The company's programs include an Einstein Award for solar ingenuity, the Solar2World aid program that has up to now focused on Africa, and hewing to the company's own internal sustainability goals via its Changemaker Manifesto. The report outlines where Nitschke sees things headed:

If the first part of the energy solution is to make high-quality, reliable solar, wind, and other renewables affordable and easily available, the second is to enable investment. But while it's relatively easy to invest in renewables within the stable political and structural framework of Europe, for example, it can be much more difficult in other parts of the world, where risk-adjusted required rates of return are far higher. Investing in developing regions to help create systems of stability, especially for the energy utility sector, is only part of the solution. “It's not about pumping money into the system," he says. “The key to bringing down financing costs is to take away barriers and introduce schemes that allow feeding in electricity into grids, for example."

In terms of increasing storage capacity, Nitzschke makes a case for a second life cycle for batteries. “We already have a movement towards decentralized battery storage. The simple way of looking at it is: You have several million electric vehicles, which all have batteries. The batteries will be replaced every two or three or four or five years. What are you doing with all those batteries — recycle them? Throw them away? You can give them a second life storing decentralized-produced solar electricity.” 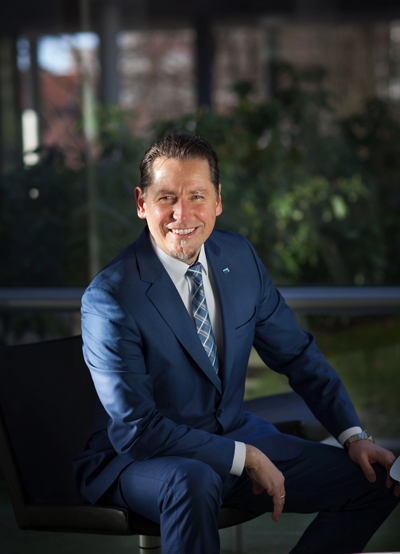 "For the most part, business has the technology, people and processes to rock the world. The challenge, therefore, isn’t the 'smarts,' it’s the take-up of the solutions proposed and piloted — the real scaling of these interventions."
— Remi Eriksen, Group President & CEO of DNV GL

Among the companies chosen by DNV to exemplify model behavior in other SDGs related to energy, Norway's own aluminum giant Hydro is showcased in the area of industry, innovation and infrastructure; Germany's Siemens shows the way for sustainable cities and communities; and Spanish energy giant Iberdrola is the most proactive when it comes to climate action.

"Economic growth must still be a goal — it is the basis of this growth that has to become sustainable," says Hydro CEO Svein Richard Brandtzæg. "It means changing some products, their content, the energy consumption and climate gas emissions in the production processes, and the ability to regain the materials when they have fulfilled their function."

For Hydro, that means adopting one of the most ambitious climate strategies in the sector, aiming to be carbon-neutral from a life-cycle perspective by 2020, encompassing production, use and recycling — the company wants to double its recycling capacity to 250,000 metric tons a year by 2020.

Ultimately, sustainability will be the new measure of industrial progress, says the report. "Industry can definitely contribute, in fact I think industry doesn't have a choice in the end," says Brandtzæg, adding that "companies that want to have a long future should regard sustainable operations as an investment, rather than a cost."

His company is ready to pay a price: "We support a global price for CO2. This has to happen," says Brandtzæg. "If CO2 is for free, then we will not reach our target."

As for sustainable cities, “It's amazing how many cities don't have an integrated strategy for infrastructure to improve local quality of life, enable economic growth, and boost competitiveness,” Elaine Trimble, director, Siemens, Global Center of Competence Cities, says in the report. She also questions DNV's prediction that energy demand will level off. “Per capita energy consumption is decreasing in most developed cities in Western Europe, but those same cities face population growth, which can still mean overall increases," she says, especially as temperatures rise and transport infrastructure becomes more electrified.

Siemens looks inward first, demonstrating green standards in buildings like The Crystal in London. The company aims to achieve a net-zero carbon footprint by 2030 and to halve its CO2 emissions as early as 2020. "Siemens will be investing some €100 million over the next three years to reduce the energy footprint of its production facilities and buildings," the report states. "Siemens also expects to recoup these costs through an annual energy savings estimated at €20 million."

Like Siemens, Iberdrola is implementing its own solutions, having installed nearly 26 gigawatts of renewable power around the planet, including major onshore and offshore wind farms. In addition to being sustainable, those projects can drive growth and employment creation.

"One example is the Wikinger project, a 350 MW offshore wind farm that Iberdrola is building in the Baltic Sea," the report states. "Sallé highlights that this project has contributed to boost Spanish shipyard industry and its suppliers. This includes the construction of the substation and its platform at the Navantia shipyards in Puerto Real; the 29 wind turbine platforms at the Navantia shipyards in the Ferrol Ria; the piles that will secure these platforms and the wind turbine towers crafted in Avilés, as well as the wind turbines built by Gamesa." 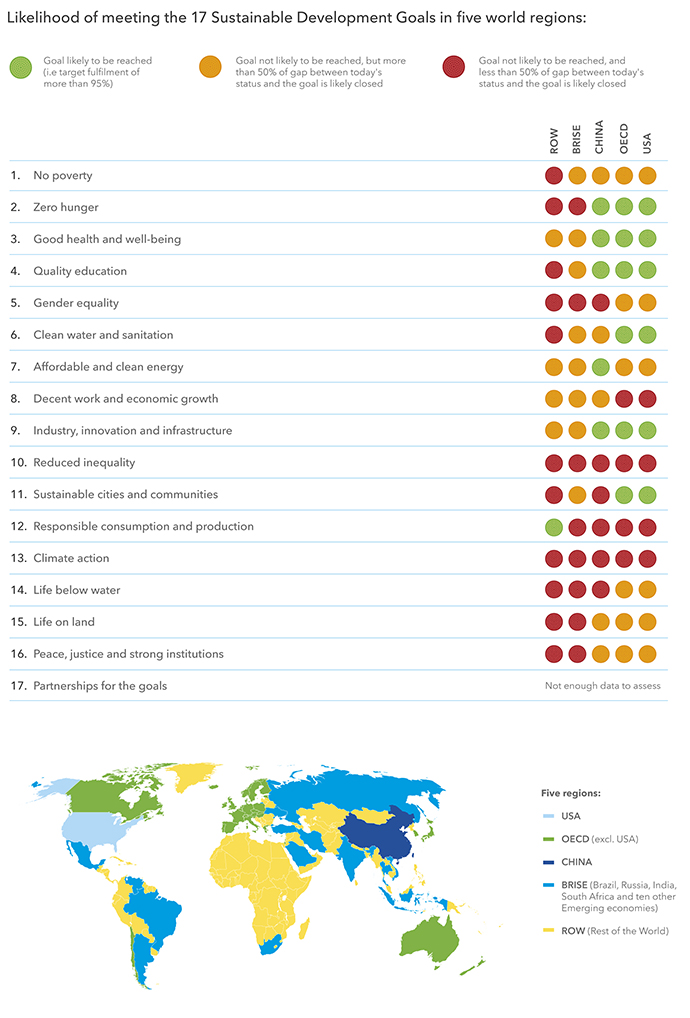 In addition, Iberdrola is leading several initiatives to ensure that electricity networks are ready to accommodate an increasing flow of renewable energy and to promote the electrification process. The company has already installed close to 8 million smart meters worldwide and is playing a key role in partnerships such as the Prime Alliance. And Iberdrola is a member of Green eMotion, a four-year cross-European initiative to promote electromobility.

Like Hydro's leaders, Carlos Sallé, director of energy policies and climate change for multinational utility Iberdrola, sees carbon pricing as imperative if the world is going to reach the SDGs. More than 1,000 companies are using internal carbon pricing or preparing to do so by 2017, according to the Carbon Disclosure Project. "By 2019, countries representing 89 percent of global GDP are expected to have some kind of carbon pricing," says the DNV report.