Out of the Dark

A project in Sierra Leone could be a beacon for many more to follow in Africa. 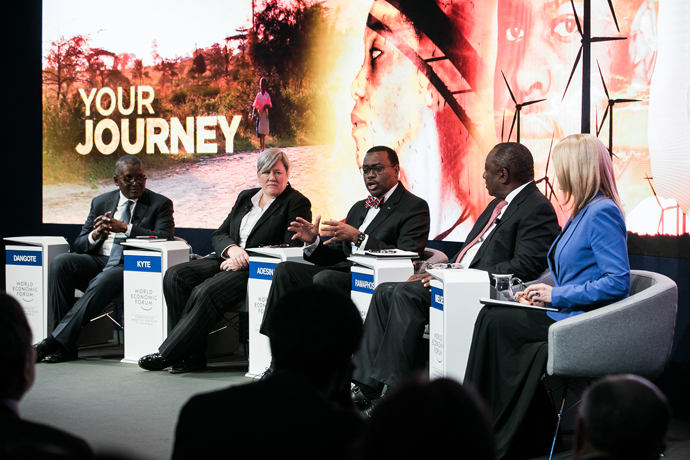 The July 2016 edition of The Site Selection Energy Report familiarized readers with lingering misperceptions and emerging opportunities in Africa. It appears that topic is on the minds of world leaders in early 2017 too.

At the 47th World Economic Forum (WEF) annual meeting that wraps up today in Davos-Klosters, Switzerland, more than 3,000 participants from nearly 100 countries have been addressing topics under the theme "Responsive and Responsible Leadership." A session on the opening day of the conference earlier this week said responding to Africa's at once dire and promising energy gap is one way elected officials and company officials can responsibly pursue greater economic growth on the continent.

According to experts, more than 600 million people in Africa lack access to clean, affordable, reliable energy. Private investment will be key, and could mean as much as 30 percent higher economic growth in Africa by 2040.

“In the past, we’ve relied on governments to power our countries," said Cyril M. Ramaphosa, deputy president of South Africa, in a WEF summary of the session. "We now need to bring in the private sector to help empower our economies and people."

“The good news is that it is technologically feasible to provide affordable, reliable, clean power to people who haven’t had access to power before,” said Rachel Kyte, special representative of the Secretary-General and CEO, United Nations - Sustainable Energy for All.

“We’re tired of seeing Africa in the dark,” said Akinwumi Ayodeji Adesina, president of the African Development Bank (AfDB). The AfDB is helping address structural problems involving the lack of base-load power by investing $12 billion on the power sector over five years. In particular, the last mile is a key focus in terms of energy distribution. "We need to learn from what’s working and scale it up," he told the WEF audience.

Adesina's bank is a partner in one project that may be a model — even if it's not the cleanest power source.

In November, a new company set up in long-suffering Sierra Leone by a private-sector joint venture announced its intent to build a US$148-million, 57-MW, oil-fired power plant in Freetown, the country’s capital city with a population of 1 million. The development from CECA SL will benefit from a $25-million loan from the Emerging Africa Infrastructure Fund (EAIF).

The EAIF explains that Sierra Leone’s economic development was hampered by the Ebola epidemic and creating the conditions for sustained development is of the highest national priority. The country has one of the world’s lowest levels of electrification, with less than 10 percent of its population having power grid access. Over 80 percent of businesses y rely on their own diesel-fueled generators, and business leaders say the lack of reliable power is one of the single biggest constraints on growth. Once complete, the new power plant will increase available electricity generating capacity by an average of 130 percent.

“Reliable power is the oxygen of economic development and this project will not only improve business conditions and the lives of families across Freetown, but also help bring new self-confidence and optimism to Sierra Leone,” said Emilio Cattaneo, executive director of EAIF. Plans for the power station predate the Ebola outbreak, and the company remained committed to the project throughout the epidemic.

“We greatly value the expertise and tenacity that EAIF and Investec have brought to our venture," said Karim Nasser, director at CECA SL. "They have helped us resolve many complex issues. We now look forward to beginning the construction phase and opening the plant for business.”

EAIF is part of the donor-backed Private Infrastructure Development Group, and is funded by the governments of the UK, Switzerland, Sweden and The Netherlands, as well as by private sector banks and development finance organizations. EAIF is managed by Investec Asset Management, one of the largest third-party investors in private equity, credit, public equity and sovereign debt across the African continent.

The project also involves building a new substation, work to the grid and a fuel pipeline. Approximately 200 construction workers will build the plant, and an estimated 42 permanent jobs will be created once it's complete.

CECA SL Generation Limited is a joint venture company set up by Abu Dhabi-based TCQ Power and Globeleq, an Africa-based developer, owner and operator of electricity generation in Africa. Globeleq has around 2,500 MW of power projects in development across Africa and plans to add significant MW of new power generation during the next 10 years.

In tandem with providing debt for a 14-year term, EAIF acted as structuring bank alongside the International Finance Cooperation (IFC) as mandated lead arranger. Other financial partners included the World Bank, the Dutch development bank, FMO, CDC and the African Development Bank (AFDB) The World Bank is providing a political risk guarantee for the project.

“EAIF is often a pioneer investor in projects in fragile states recovering from natural disaster or conflict," said Nazmeera Moola, head of EAIF at Investec Asset Management, in November. "Sierra Leone is a country of great economic potential, and the leadership of CECA SL is to be congratulated for its enterprise and vision.”