Corporate actors take center stage in efforts to brighten the future as well as they brighten workspace. 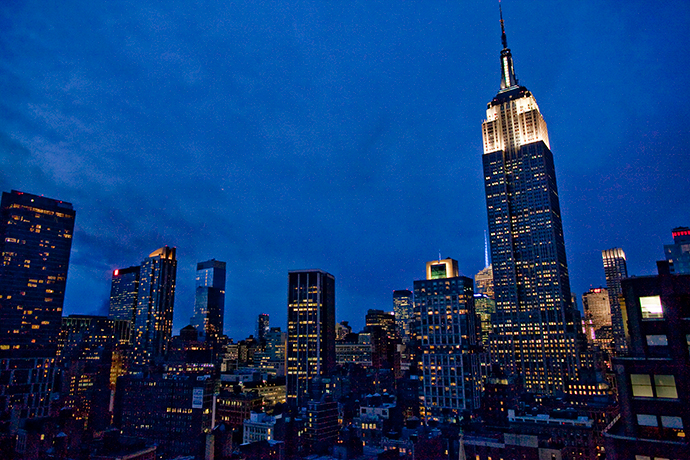 Energy efficiency and lighting improvements made several years ago at the Empire State Building continue to shine as a role model for office building owners and tenants.
Photo courtesy of Philips Lighting
by ADAM BRUNS

In May, the U.S. Department of Energy (DOE) announced that the efforts of 345 public- and private-sector organizations in the Better Buildings Challenge have led to a combined 240 trillion Btus and an estimated $1.9 billion in cumulative energy and cost savings.

The results are summarized in the 2017 Better Buildings Progress Report. The goal of the broader Better Buildings Initiative is to make commercial, public, industrial, and residential buildings 20 percent more energy-efficient over the next decade.

“Through the Better Buildings Initiative, hundreds of leaders from the public and private sectors are demonstrating innovative approaches and deepening American investments in critical building infrastructure,” said U.S. Secretary of Energy Rick Perry.

The approximately 345 organizations that have specifically stepped up to the Challenge represent more than 4.4 billion sq. ft. of building space, include more than 1,000 industrial facilities, and have committed $7 billion in financing. "Partners have shared energy performance results for nearly 38,000 properties," said the DOE. "On average, partners are improving by more than 2 percent per year, and are staying on track to meet their energy-savings goals of 20 percent over the next 10 years."

This year’s 14 energy and water goal achievers include a number of industrial companies:

More than 35 partners and financial allies joined the Better Buildings Challenge over the last year, committing 200 million sq. ft. of building space, nearly 40 plants, and $650 million for efficiency projects. (See the full list of new partners here.) More than 900 organizations across many diverse sectors are now part of the Better Buildings Initiative. They represent more than 13 percent of total US commercial building space, about 12 percent of the US manufacturing energy footprint, and 125 state and local governments.

LEDs and other lighting solutions can go a long way toward achieving energy savings goals while also better illuminating facilities and the cities they inhabit. A recent Today in Energy brief based on the most recent Commercial Buildings Energy Consumption Survey (CBECS) from the U.S. Energy Information Administration (www.eia.gov) examined types of lighting used in large commercial buildings and the ways building operators control that lighting. Like many reports based on federal data, the information is old (2012), but the points it makes remain current and relevant.

"Compared with other investments in energy efficiency — such as upgrading heating, ventilation, and air-conditioning systems or replacing insulation — lighting controls are often relatively easy, accessible, and affordable changes," said the report. But that doesn't mean they're being executed at the rate you might expect: 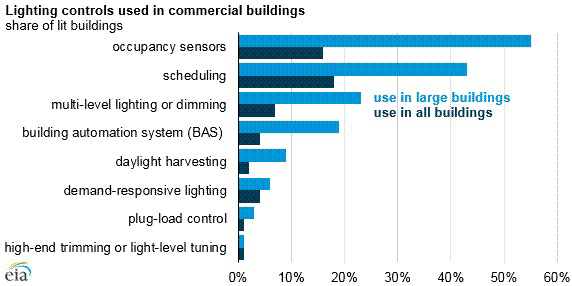 Netherlands-based Philips Lighting, meanwhile, in partnership with the World Council on City Data (WCCD), has released a report in an appearance before the United Nations in New York finding that cities could make energy savings and CO2 emission reductions of almost two-thirds through the introduction of smart LED street lighting.

The report says Los Angeles realized energy savings of 63 percent in 2016 by implementing such a system, generating cost savings of $9 million and reducing its annual greenhouse gas emissions associated with public lighting by 47,000 metric tons (equivalent to the greenhouse gas emissions from almost 10,000 passenger vehicles driven for one year).

The report says that better quality lighting could also bring benefits such as reduced crime rates and improved citizen perceptions of safety, "with Los Angeles observing a 10.5-percent drop in crime rates for offenses such as vehicle theft, burglary and vandalism in the first two years of its LED conversion program." Other benefits of connected LED street lighting cited by the report include improvements in traffic safety for all road users, city attractiveness and economic strength. But like office building proprietors, cities haven't been especially quick to light up LEDs, in part because of difficulty financing projects up front on already-tight city budgets. 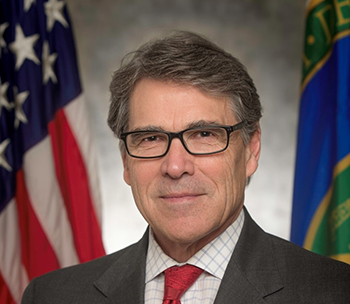 “By planning ahead and investing in cost-effective energy efficiency strategies, partners are bringing better buildings to our communities and improving the everyday places Americans live and work, while creating new and lasting jobs.”
— U.S. Secretary of Energy Rick Perry, May 16, 2017

“Of approximately 300 million streetlights across the world, only about one in 10 are energy-efficient LEDs, and just 2% are connected," said Harry Verhaar, head of Global Public and Government Affairs, Philips Lighting. “Combining energy-efficient lighting with connected system management can deliver energy savings of up to 80 percent — which would make a significant dent in our climate change targets."

Lighting currently accounts for 15 percent of global electricity consumption, but with a universal switch to LEDs, lighting’s share of power consumption would fall to just 8 percent, Philips asserted.

Los Angeles has now converted 140,000 street lights to LED and has 110,000 nodes connected and managed through the Philips Lighting CityTouch system. Buenos Aires is another leader in smart lighting, having entered into a public-private partnership with Philips and upgraded more than 75 percent of its public lighting to LEDs, improving operational efficiency and realizing energy savings of over 50 percent.

Buenos Aires, Argentina, has upgraded more than 75 percent of its public lighting to LEDs, improving operational efficiency and realizing energy savings of over 50 percent.
Photo courtesy of Philips Lighting