Actually, the worldwide web of activity by Russian utility and nuclear power champion Rosatom is already quite robust. 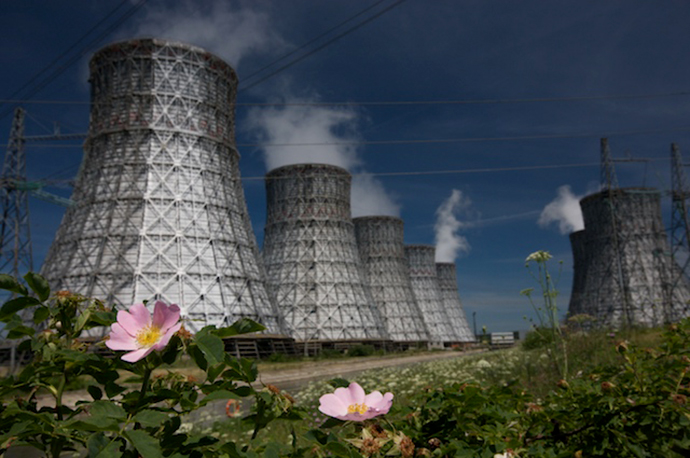 Can flowers in the foreground dispel the shadow of those dark towers? This official Rosatom photo is meant to show the "green" nature of nuclear power.
All images courtesy of Rosatom
by ADAM BRUNS 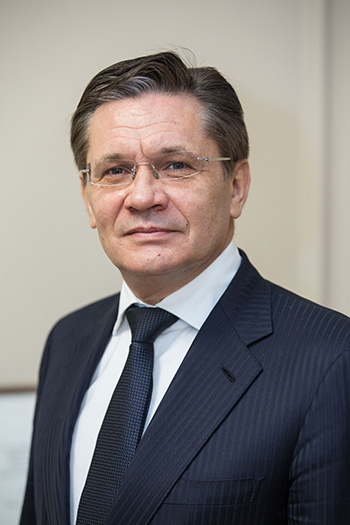 Alexey Likhachev, CEO of Rosatom State Atomic Energy Corporation, took over the post from Sergey Kirienko, who was appointed the First Deputy Chief of the Presidential Executive Office. Previously, Likhachev was First Deputy Minister of Economic Development of the Russian Federation.

If you think Russia aims to take over the world, you might be right. But it may take the form of bare-faced business, not a bare-chested president.

Official state atomic energy corporation Rosatom is a Russian publicly owned corporation that supplies a bunch of Russia's electricity needs. But its reach extends far. Among its international agreements are 34 nuclear power plant (NPP) construction projects in 12 countries — it presides over a 10-year portfolio of overseas orders for NPP construction worth north of $133 billion, making it No. 1 globally. It enriches uranium, with 17.7 percent of the global nuclear fuel market (also No. 1), and a No. 2 position as an owner of uranium deposits. Rosatom annually produces approximately 3,000 tons of uranium domestically, and some 5,000 tons in other countries. "Raw materials of the Russian and foreign deposits (particularly in Kazakhstan) will be enough to supply both domestic and international projects of Rosatom for the next hundred years," the company states.

And it operates more than 400 companies and institutions at last count, including the operator of the world's only nuclear icebreaker fleet. The company employs 262,000 people, working in 42 countries. Alexey Likhachev, CEO of Rosatom State Atomic Energy Corporation, took over the post from Sergey Kirienko, who was appointed the First Deputy Chief of the Presidential Executive Office. Russian President Vladimir Putin signed the appointment decree on October 5, 2016. Previously, Likhachev held the position of the First Deputy Minister of Economic Development of the Russian Federation.

One of the countries Rosatom is working with is the United States of America. In June, the company announced its TVEL Fuel Co. plans to supply its TVS-K nuclear fuel to a US NPP for pilot use, though it declined to say which one. The news was delivered at the Atomexpo 2017 forum in Moscow. “We have already signed a contract for pilot use of the fuel with a US operator and will deliver the pilot TVS-K assemblies in 2019,” said Oleg Grigoriev, TVEL Senior Vice President. The fuel has been in development for a decade, and included a crucial partnership with Swedish power giant Vattenfall in order to validate the product.

In an internal newsletter in February, TVEL's senior vice president for R&D, technology and quality said the company planned to produce the fuel eventually in the US: "This decision was made for the reason of logistics," he stated. "The US nuclear industry is a well-oiled mechanism. No stock is kept at the plant. To supply fuel from Russia means to ship it across the ocean. This is too long. And there should be no failures. This is why we had discussed the possibility of organizing fuel production in the USA from the very beginning. More important is to decide whose uranium to use. We will insist on using our uranium."

Most of the targeted customer reactors are located in the USA. "Entering the American nuclear fuel market is a new and difficult task," he said. "This is the reason why we have made a partnership with Global Nuclear Fuel Americas, a heavyweight player of this market. Many operators from all over the world will be more willing to work with us after we are licensed in the USA. In other words, we have a very difficult exam ahead, but I am sure we will pass it."

More Than Nuclear, and Definitely More Than Russia

Nuclear power provides up to 38 percent of what the International Energy Agency calls "green" (i.e. non-fossil-fuel) power. But Rosatom is going after other renewable energy solutions too, recently entering the wind market. A recently signed capacity supply agreement (an agreement that secures a return on investment through guaranteed capacity payments) provides for the first wind park to be commissioned in 2018, followed by two more, with a total capacity of 610 MW. The agreement includes a demanding provision: that locally produced content comprise 65 percent of the wind turbine components. That means a probable FDI project.

"The government will pay only if each wind turbine is manufactured in Russia," said Kirill Komarov, Rosatom's first deputy CEO for corporate development and international business, to TASS news agency at the 22nd UN Climate Change Conference (COP22) in Morocco last November, according to an account published by RN. "The country will benefit from the project as it will create new jobs and bring new technologies. This is why it is so important to choose the right partner — a partner who will be prepared for an extensive technology transfer to Russia."

Meanwhile, the list of agreements, projects and contracts abroad continues to grow, including:

In June, Rosatom America Latina and the Higher University of San Andres (UMSA) in Bolivia signed a memorandum of understanding following other MoUs signed last year with the Ministry of Hydrocarbons and Energy of the Plurinational State of Bolivia. As in Vietnam, Rosatom is working with the Bolivian government to construct a nuclear research and technology center, which "will allow Bolivia to proceed to mastering the nuclear technologies and its application in science, medicine, geology, agriculture and other areas," stated Rosatom.

"In particular, the Center will provide the opportunity to start production of radioisotopes in Bolivia for their wide use in diagnostics and treatment of cancerous diseases which makes the nuclear medicine more affordable for the population of Bolivia," said Rosatom. "The application of irradiation technologies for food and agricultural products treatment, pest and bacteria control will make it possible to increase the products' storage period while creating conditions for the increase of national agricultural products export."

The intergovernmental agreements, said Rosatom, "were signed in furtherance of the arrangements between Evo Morales, President of Bolivia, and Vladimir Putin, President of the Russian Federation made within the framework of the meeting on the sidelines of the Third Summit of the Gas Exporting Countries Forum held in Teheran, on 23 November, 2015." 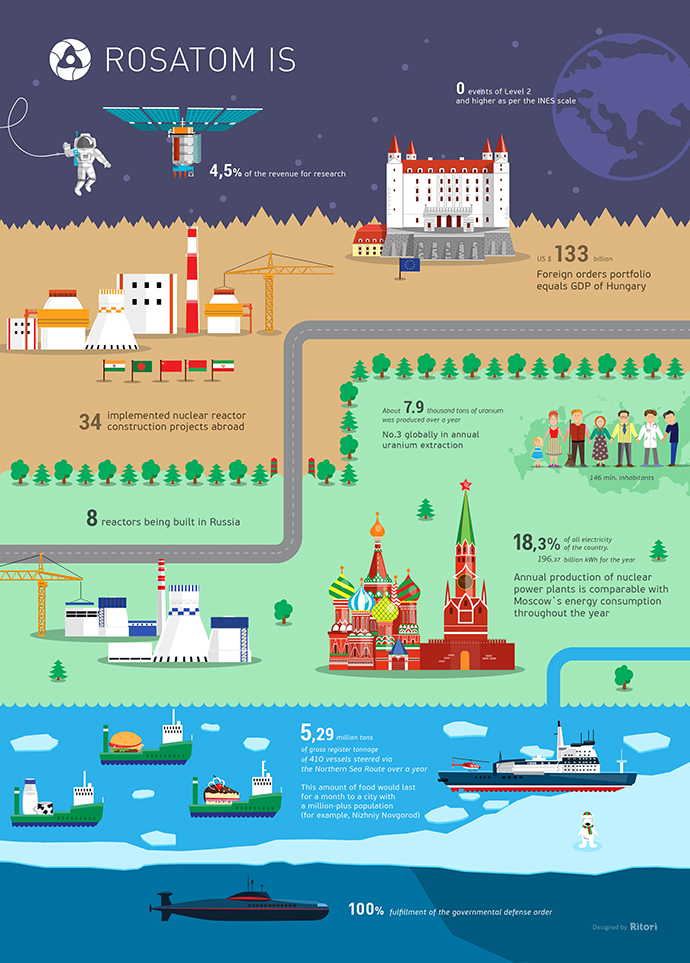