Are They Buying What You're Selling?

Two reports highlight where the most solar power is being produced, and where companies are procuring the most clean energy. 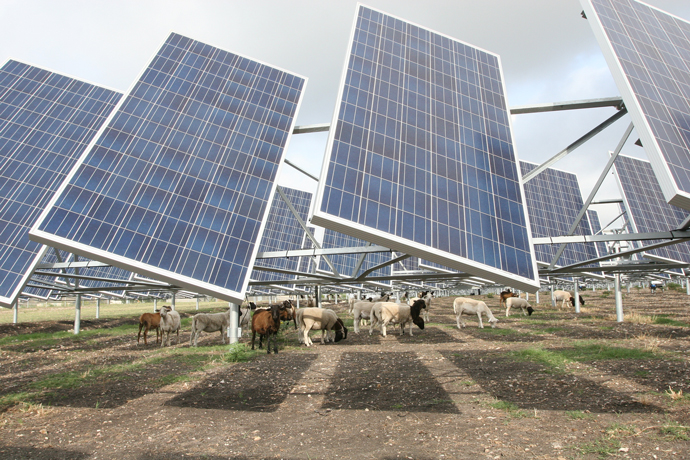 Keeping the underbrush cleared at the Alamo 5 solar farm outside San Antonio is an environmentally conscious herd of sheep.
Photo courtesy of CPS Energy
by ADAM BRUNS

"The U.S. solar market had its biggest year ever in 2016 [10,593 MWdc installed], nearly doubling its previous record and adding more electric generating capacity [39 percent of the total] than any other source of energy for the first time ever," said the SEIA. At the same time, on average, PV system pricing fell by nearly 20 percent. — the biggest year-over-year decline since GTM started tracking it. 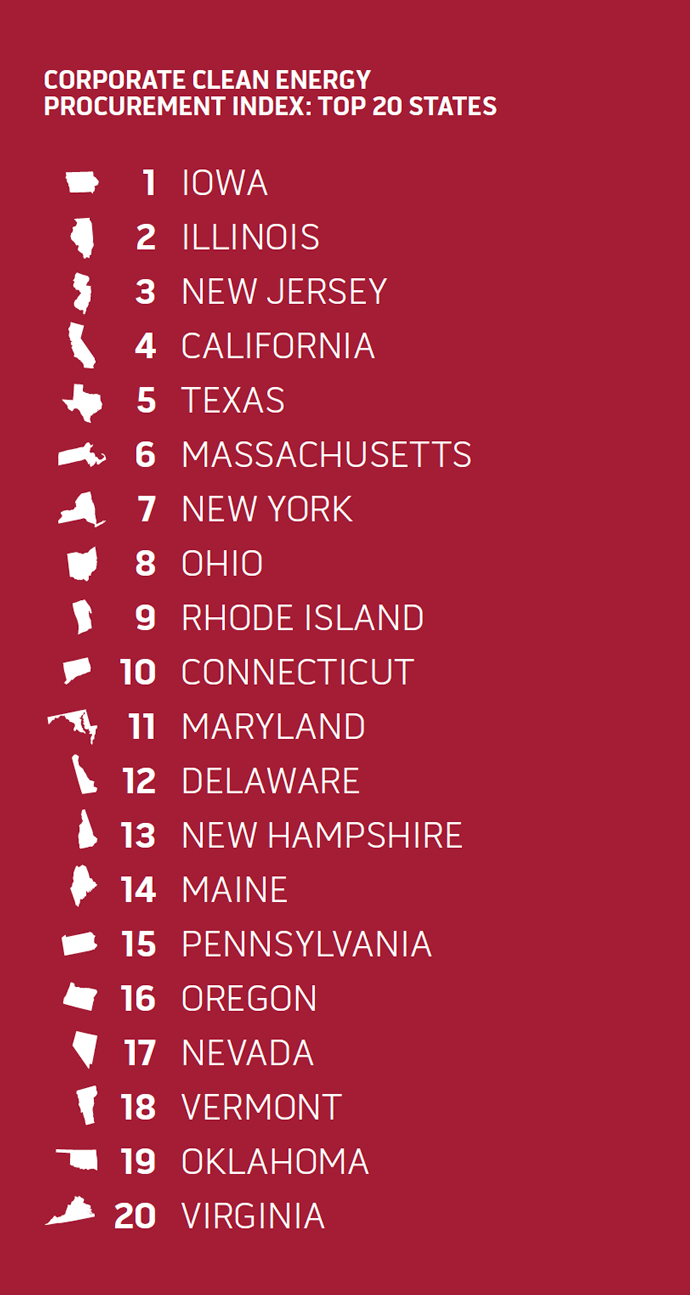 “It would be hard to overstate how impressive 2016 was for the solar industry,” said Abigail Ross Hopper, SEIA’s president and CEO. “Prices dropped to all-time lows, installations expanded in states across the country and job numbers soared."

The report forecasts that 13.2 gigawatts (GW) of solar PV will be installed in the US in 2017, a 10-percent drop from 2016, though still 75 percent more than was installed in 2015. The main reason for the sudden swale is the mountain of installation activity in 2016 — kinda hard to keep up that pace, which was largely stoked by uncertainty over whether the 30-percet federal Investment Tax Credit would be extended, which it was.

Twenty-two states each installed more than 100 megawatts (MW) in 2016, up from just two states in 2010. "There was high growth in states that are not known for their solar market, including Georgia, Minnesota, South Carolina and Utah," said the report. This year, the residential segment is expected to grow 9 percent, while the non-residential segment will grow 11 percent year-over-year and install a record 1,756 MW.

Solar installations in Utah increased 500 percent year-over-year, to 1,489 megawatts total versus 248 megawatts in 2015. Residential installations jumped from 5,000 in 2015 to 13,000 in 2016. Commercial installations grew by 500 percent, "and the tremendous growth pattern is expected to continue well into the future as companies and organizations like eBay, Boeing, the University of Utah, Intermountain Healthcare, Convergys and Adobe procure renewable energy to meet their compliance and sustainability goals," said a related release from the Economic Development Corporation of Utah and the Utah Solar Energy Association.

Following the lead of programs in Moab and on university campuses, in early February, Utah Clean Energy and Salt Lake City joined forces to unveil a 10-year solar deployment plan for the state. However, a new law will establish a four-year phase-out of tax credits for residential rooftop solar. 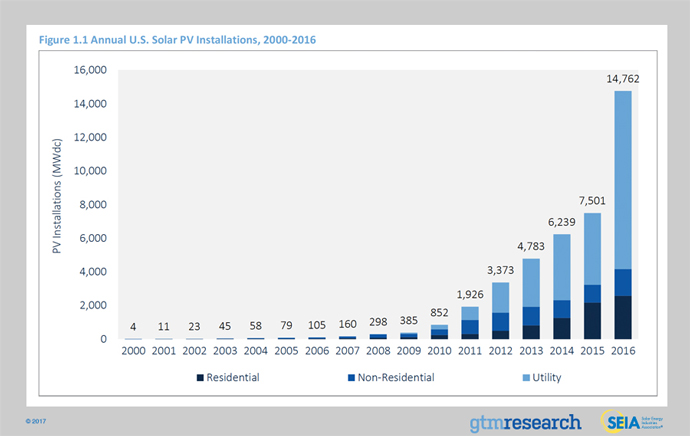 Among the largest utility-scale solar farms to come online in 2016 was Alamo 5, owned and operated by ConEdison Development. It's a 118-MW DC/95-MW AC, dual-axis solar installation in Uvalde and Knippa, Texas, that will deliver clean energy to CPS Energy of San Antonio, and consists of 378,000 panels on 990 acres.

“We are the solar leader in Texas with 230 megawatts in the ground, and that will more than double to 500 megawatts by year’s end,” said Cris Eugster, CPS Energy’s executive vice president and chief generation and strategy office, at the facility's dedication last spring.  “The dedication of Alamo 5 represents a significant milestone in our commitment to generate at least 65 percent of our energy from low- or no-carbon resources by 2020.”

The SEIA report says, "Despite buildout falling on an annual basis, the utility PV segment is still expected to see over 8 GWdc in 2017 — nearly double what was installed in 2015 — as ITC spillover drives significant utility PV deployment, accounting for between 55 percent and 60 percent of projected utility PV capacity buildout in 2017."

When 'RE' Doesn't Mean Real Estate

"While created on behalf of RILA and ITI, the index is broadly applicable to many stakeholders, including other business sectors, the military, higher education, and state and local government," said the report. "It is intended to assist policymakers and large RE [renewable energy] buyers in advancing policies that help, not hinder, RE development, and help large RE buyers to select states in which they may make RE investments." 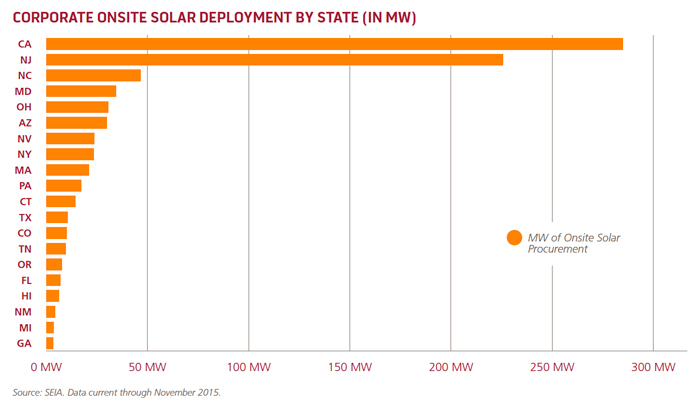 In 2015, commercial and industrial (C&I) buyers accounted for greater than half of all signed wind energy power purchase agreements (PPAs), outpacing utilities. "The C&I market is now around five gigawatts (GW) of contracted wind and solar power, with commercial customers intending to procure an additional 60 GW by 2025, according to the Renewable Energy Buyers Alliance (REBA)," says the report, spotlighting such major headline grabbers as Amazon, Google and Walmart.

The index consists of 15 indicators, broken into three categories:

Iowa leads the index rankings with an overall score of 74.73, nearly six points ahead of Midwest neighbor No. 2 Illinois, at 68.79. "Iowa joins Oklahoma, Virginia, and North Carolina as the only states with measurable deployment via both green tariffs/direct utility purchases (548 MW in Iowa) and offsite PPAs (114 MW)," said the report. Rounding out the top five states are No. 3 New Jersey, No. 4 California, and No. 5 Texas.

The Northeast, Midwest, and Mid-Atlantic are generally the most favorable regions in the U.S. for corporate customers seeking to power their operations with renewable energy. And the report's publishers suggested five points of action for states wanting to emulate those leaders:

Last July, Clean Edge (one of the co-author organizations of the procurement index) released the latest version of its Corporate Clean Energy Leaders Universe, recognizing these 37 corporations: 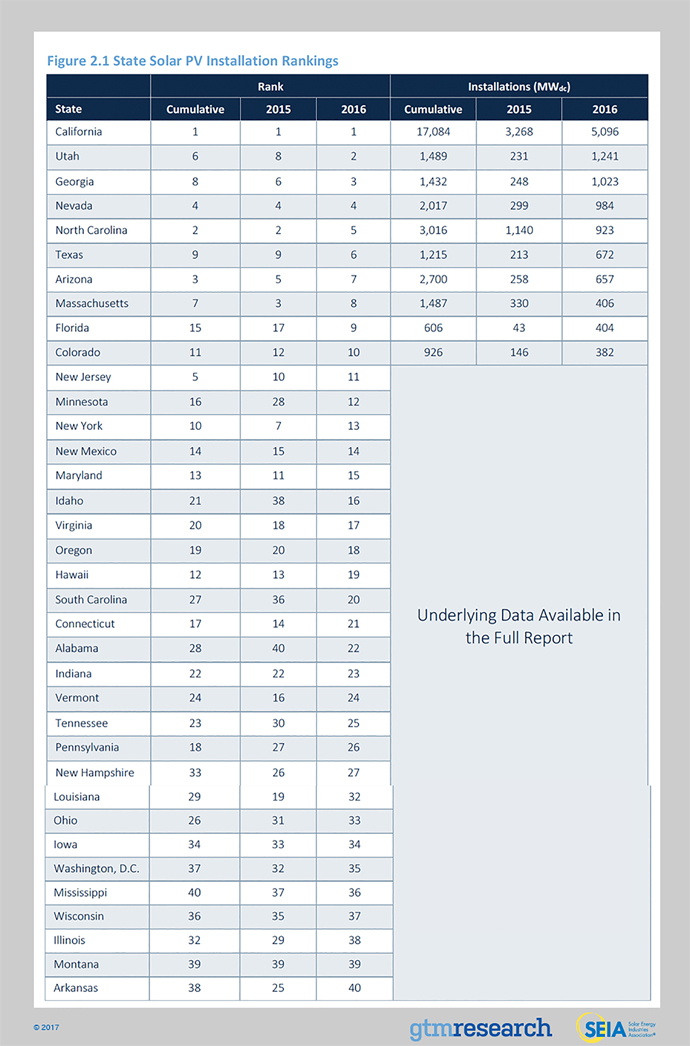