You Can't Tell the Players Without a Scorecard

Boston's still the best and LA's leap is laudable in the newest ACEEE ranking of energy-efficient US cities. 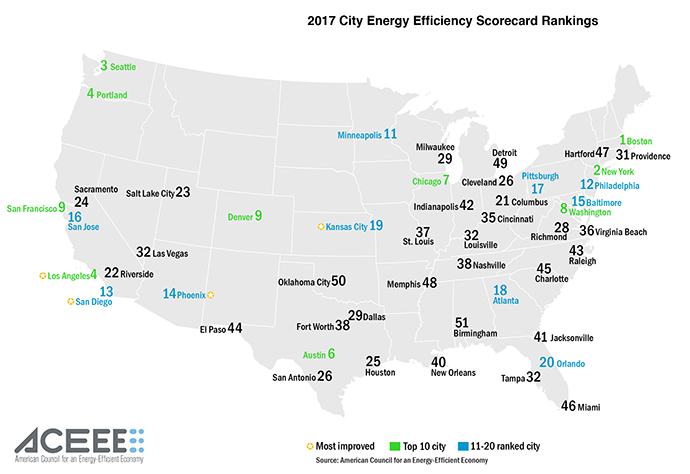 Overall, 32 cities improved their scores from the last edition of the City Energy Efficiency Scorecard. However, says the ACEEE, "While scores are generally increasing, all cities have room for improvement, especially in transportation policies."
by ADAM BRUNS 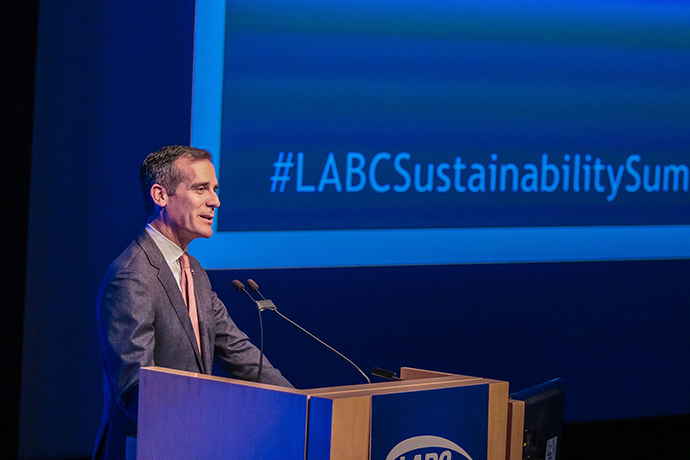 On April 28, Mayor Garcetti spoke at the Los Angeles Business Council Sustainability Summit 2017. In reviewing progress toward his Sustainable City pLAn in March, he said, “We are a healthier and more prosperous city today because we set bold targets and held ourselves accountable for making progress that Angelenos can see and feel.”

Earlier this month, the third edition of the City Energy Efficiency Scorecard from the American Council for an Energy-Efficient Economy (ACEEE), revealed Boston remains the top US city for energy efficiency, receiving 84.5 out of a possible 100 points, an improvement of 2.5 from its 2015 score. "Whether you're a resident who lowered their monthly utility bill through Renew Boston or an owner of one of our city's leading green buildings, we should all be proud of our success to reduce energy and save money," said Boston Mayor Martin J. Walsh.

Cities in the Northeast and Mid-Atlantic regions had a high median score, but did not dominate. Following Boston, the top 10 US cities for energy efficiency are:

"Based on a 25-point jump from the last edition of the Scorecard in 2015, Los Angeles was the most-improved city," said the ACEEE. "San Diego, Kansas City, and Phoenix are the second, third, and fourth most-improved cities, respectively. Seven other cities, including Orlando, showed double-digit improvements since the last Scorecard."

Additional findings from the 51-city analysis include the following:

"Across the nation, cities are taking steps to save energy, and they are creating more economically vibrant and resilient communities in the process," said ACEEE senior researcher David Ribeiro, the lead report author.

In the five key areas covered by the report, the key findings are: 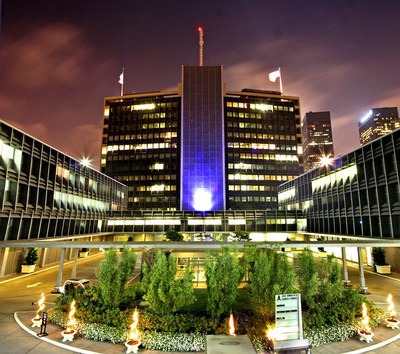 Boston almost has an unfair advantage: Energy costs in New England are so high that the incentive to save energy is equally high.

The rise of Los Angeles, however, is more surprising. The city rose eight positions from the scorecard's 2015 edition, earning 76.5 points out of a possible 100. In the individual city profiles ACEEE makes available, the following highlights show why. Nearly all of them emanate from the city's first-ever sustainability plan, unveiled last year, offering guideposts for other cities aspiring to similar futures:

Local Government Operations (8.5 of 10 points)
"Los Angeles has energy savings and greenhouse gas (GHG) emissions reduction goals for local government operations. The first Sustainable City pLAn Annual Report will track progress toward goals. The city has a LEED requirement for new buildings and a comprehensive retrofit strategy, and benchmarks the energy use of a large share of municipal buildings. Los Angeles leads by example through efforts to increase efficiency in vehicle fleets, public lighting, and equipment procurement."

Community-Wide Initiatives (10 of 12 points)
"Los Angeles adopted the Sustainable City pLAn in 2015, including community-wide energy savings and GHG emissions reduction goals. To achieve the city’s 2025 goal, it will need to reduce community-wide GHG emissions 2.6 percent annually. The city is on track to surpass this goal. The Sustainable City pLAn also includes goals of reducing the urban-rural temperature differential 1.7 degrees Fahrenheit by 2025 and 3 degrees by 2035."

Transportation Policies (18 of 30 points)
"Los Angeles has multiple plans to encourage efficiency in transportation, including the Sustainable City pLAn, which established a citywide goal of reducing vehicle miles traveled (VMT) per capita by 5 percent by 2025. A portion of the city’s zoning overlays encourage transit-oriented development and mixed-use development, and the city offers density bonuses for all affordable housing units. Los Angeles has also reduced minimum parking requirements for certain developments. The city has several initiatives that incentivize affordable housing development near transit centers. The city could improve its score by increasing its focus on mode shift strategies and freight system efficiency. "

Other facts the city can marshal to its case include:

In March, Los Angeles Mayor Eric Garcetti released a progress report that showed early achievement of more than two-thirds of 2017 goals contained in the Sustainable City pLAn, originally announced in 2015.

Indeed, Garcetti and fellow city leaders as well as mayors and governors nationwide continue to respond to climate change as if it were real. Several news reports on May 30 indicated that President Donald Trump plans to pull the United States out of the Paris Climate Agreement, already prompting noted entrepreneur Elon Musk to say he would resign from the president's CEO advisory councils if that were true. In March, Garcetti responded to the president's earlier actions at the EPA:

“President Trump’s moves today to undo the Clean Power Plan and roll back other key climate policies undermine the important efforts — throughout the country and the world — to tackle the single greatest threat and economic opportunity of our time: climate change," said Garcetti. "I asked 37 of my fellow ‘climate mayors’ to join me in writing President Trump to object to his actions, including severe proposed budget cuts to the EPA and clean energy programs like Energy Star at the U.S. Department of Energy, and rollbacks to vehicle fuel efficiency standards. The administration is taking clear steps to undermine not only the federal government's commitment to meeting the goals of the Paris Climate Agreement, but also U.S. leadership on public health and growing the clean energy economy.

"No matter what happens in Washington, we will work to meet our Sustainable City pLAn goal to reduce greenhouse gas emissions 80 percent by 2050, move toward zero emissions transportation, and pursue our vision of a 100-percent clean energy future. Los Angeles has also divested from the coal-fired Navajo Generating Station, and the Los Angeles Department of Water and Power will be completely coal-free by 2025. Nothing can stop us from investing in electric cars and mass transit; from ending our reliance on coal; from installing cool roofs and pavement; or from leading America in solar power. Los Angeles will uphold the obligation to preserve the health of our planet, protect our most vulnerable residents, and create a 21st century economy — and working with my fellow ‘climate mayors,’ we will continue doing our part to meet the goals of the Paris Climate Agreement in cities across the country."