Massachusetts, California and Rhode Island Do the Most to Use the Least 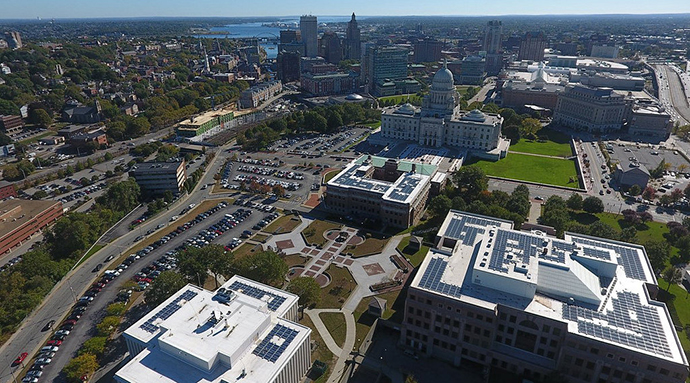 Energy efficiency and solar panels on state buildings (above) are among the tools Rhode Island is using on the path to net-zero-energy buildings and to cut greenhouse gas emissions by 45 percent by 2035 under the Resilient Rhode Island Act.
Photo courtesy of Governor Gina Raimondo's office
by ADAM BRUNS

The 2017 State Energy Efficiency Scorecard, released by the American Council for an Energy-Efficient Economy (ACEEE) in late September, found that Massachusetts is No. 1 again, followed by California, Rhode Island, Vermont and Oregon. Idaho, Florida, and Virginia are the three most-improved states.

"As Massachusetts continues to make historic investments and progress in clean energy development, energy efficiency remains the most cost-effective method of reducing ratepayer costs and lowering greenhouse gas emissions," said Massachusetts Governor Charlie Baker. "Over the last year our administration has focused on increasing access for low- and moderate-income ratepayers, while investing in innovative peak demand reduction projects that will provide significant environmental and economic benefits to the Commonwealth."

"No. 3 Rhode Island achieved a perfect 20-out-of-20 score in the utility programs category for the fourth year in a row," said the ACEEE, "thanks again to its ambitious Three-Year Energy Efficiency Procurement Plan, which has helped to drive electric utility savings to levels approaching 3 percent, among the highest in the country. In December 2016, the Governor's Executive Climate Change Coordinating Council (EC4) issued the Greenhouse Gas Emissions Reduction Plan to help cut emissions 45 percent by 2035 under the Resilient Rhode Island Act."

"From the nation's first offshore wind farm to the thousands of clean energy jobs we've created over the past few years, I'm proud that Rhode Island is leading the nation in the green economy," said Rhode Island Governor Gina Raimondo. "These programs help all of us — including residents, businesses, cities, towns and state government — to save money on our energy bills, reduce our carbon footprint and add to the 15,000 clean energy jobs in our economy. Rhode Island's third place ranking in this report, up from fourth last year, demonstrates that our investments in electric and natural gas energy efficiency programs are paying off." 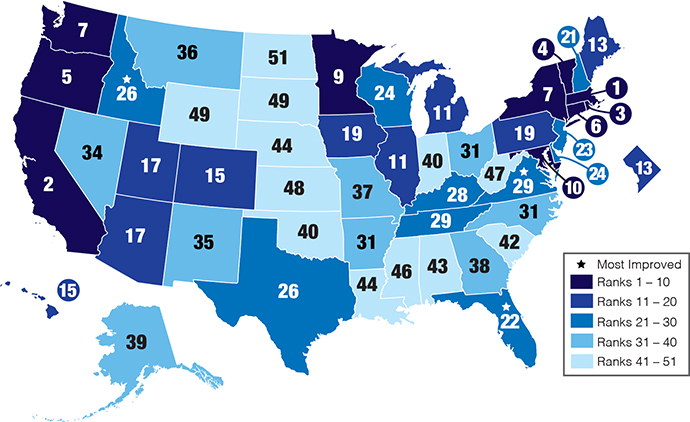 Coastal states scored big on this year's Energy Efficiency Scorecard, in part because many of the top states (Oregon being an exception) are motivated to do all they can to lower the use of their high-priced power.
Map courtesy of ACEEE

It's no surprise New England territories lead the way: That's where energy costs are highest. In fact, as of July 2017, according to the Energy Information Administration, ACEEE champion Massachusetts had the fourth-highest residential electrical power prices in the nation. No. 2 California was sixth highest, Rhode Island ninth and Vermont eighth.

Massachusetts utilities achieved the highest reported levels of electric savings in 2016, a year after raising annual savings targets to 2.9 percent for electricity and 1.24 percent for natural gas, the most ambitious targets in the nation, the ACEEE Scorecard reported. "Utility revenues are decoupled from sales, and performance incentives are in place to encourage program administrators to meet or exceed energy savings targets."

Efficiency Where It's Needed Most

Massachusetts isn't perfect, said the ACEEE: It still needs to develop energy use transparency requirements and focus on limiting vehicle miles traveled per capita. ("New York, Oregon, Washington, and Vermont are among the few states in the nation to have a vehicle miles traveled (VMT) reduction target," the report noted.)

But it's leading the way in getting high-efficiency programs in front of lower-income residents. The commonwealth continues to roll out its $15-million Affordable Access to Clean and Efficient Energy Initiative to reduce the energy burden and cost variability for low- and moderate-income residents.

An update to the ACEEE Scorecard report methodology in 2017 gave new consideration to state policies designed to improve energy efficiency programs that serve low-income customers. "This new scoring metric arises from ACEEE research that shows low-income US households spend three times as much on their household energy bills as a percentage of their income as other households," the organization said.

The LEAN program coordinates administration of government- and utility-funded energy efficiency services to income-qualified customers, is considered among the most successful programs of its kind in the country. In 2017, LEAN will oversee the delivery of approximately $120 million in ratepayer and federal funds for low-income weatherization and energy efficiency programs.

A new scoring metric on this year's Scorecard arises from ACEEE research that shows low-income US households spend three times as much on their household energy bills as a percentage of their income as other households.

In another report released in late October, the ACEEE found low-income customers face several major barriers to participation in utility efficiency programs, ranging from lack of resources for efficiency upgrades to aging housing stock that may need health and safety improvements. In addition to the Massachusetts LEAN program, the programs it highlighted as successful were:

The ACEEE Scorecard's other findings highlighted other movers in the rankings, starting with Idaho, where the state has been busy updating its energy codes for buildings, and where utilities are improving efficiency as well. The report highlights one particular project undertaken by the University of Idaho, which is "on track to save more than $355,000 annually on energy and maintenance costs from converting 66,815 fluorescent lights to LEDs, reducing energy use by 5.6 million kWh. To convert to the more efficient bulbs, the university leveraged a rebate from Avista for more than $1 million."

"Idaho posted the most gains by far in 2017, surging past a number of mid-ranked states in ACEEE's comparative index of efficiency policies, best practices, and other metrics," said the ACEEE, though the state still ranks at the "top of bottom," as it were, at No. 26 (up from No. 33).

Florida (No. 22) is among the top 10 most-improved states for energy efficiency. In late 2016 the state began its new Farm Renewable and Efficiency Demonstration (FRED) Program, which provides free energy evaluations to farmers and grant reimbursements for proposed efficiency measures. In addition, Florida is preparing to implement a stronger state building code with a major emphasis on energy efficiency. Steven Nadel, ACEEE executive director, said both Florida and Texas (tied with Idaho at 26th), can use energy efficiency tools to recover from the storms that raked those territories.

"States hit by Hurricanes Harvey and Irma will need to rebuild, and energy efficiency can help them do so smartly, including improved building codes and promotion of Combined Heat and Power (CHP) systems," he said. "By pursuing energy efficiency policies, states can save residents and businesses billions in the long term."

California's requirements for reducing greenhouse gas (GHG) emissions have prompted several strategies for smart growth and transportation planning, and the state continues to lead in efficient buildings policies, with its latest building energy code updates taking effect in January 2017 and moving the state closer to its goal of achieving net zero energy use for all new residential buildings by 2020 and commercial buildings by 2030.

"Other leaders include the District of Columbia, New York, and Washington," said the ACEEE, "all of which have adopted the latest model codes and enforce mandatory building energy benchmarking and transparency policies for the commercial or residential building sector."

The state's leadership shows up in energy consumption stats too: It's big enough to be its own nation and to have consumed more than 7.6 quadrillion Btu in 2016 (second only to Texas), but U.S. Energy Information Administration statistics show California in 2016 was 49th in total energy consumption per capita. 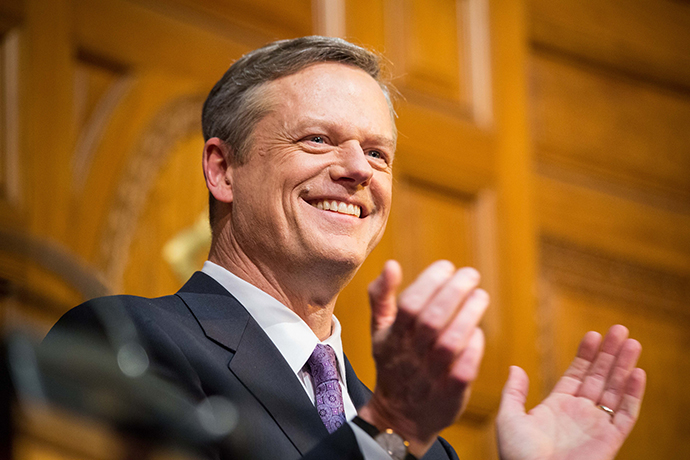 Massachusetts Governor Charlie Baker, shown here at his State of the Commonwealth address last January, lauds peak demand reduction projects and better access for low- and moderate-income ratepayers for helping the state achieve this year's No. 1 ranking.
Photo courtesy of the Governor's office